An Atwood Shawl for Camden...And a Random Post for Me 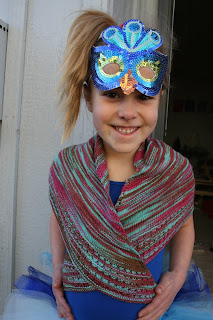 (The paragraph that has NOTHING to do with the main post)
I just crocheted a provisional cast-on onto my circular needles...then called it a night for knitting, aha!  That crochet business is some WORK!  I have no idea how to keep the tension...and I strangely feel like it was easier to do this cast-on when I knit my Homegrown sweater.  Anyhow, that sweater will be coming down the pike - finished by the end of February, I hope!  I do have a ballet sweater to knit for Camden, too, so, I clearly already need this sweater off the needles before I've even begun :O 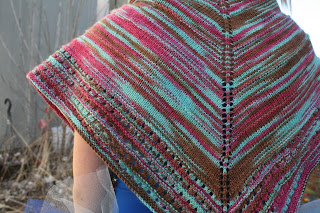 All that nonsense aside, I DO have a finished project!  I knit the Atwood Shawl by Nicole Clark of Hue Loco (she sells yarn and project bags on both her main site and on Etsy).  Nicole also has a podcast, and I've enjoyed watching it, as she throws in tutorials every now and then, too.  I was missing a pattern for a project bag, and I watched her tutorial for bag-making...and voila!
It's super cool of her to produce these tutorials, especially as there are a million new sewists out there who love a quick and easy project.

Clearly, this lovely shawl is for Camden...no way could I pull it off as well, LOL.  I used Gnome Acres yarn in the Spugnomi colorway, on the House Gnome base.  Speaking OF GA yarn, I just won a skein of it in the This Old Knit podcast group on Ravelry, and I'm super excited!!!  Thank you so much, Nina!!! 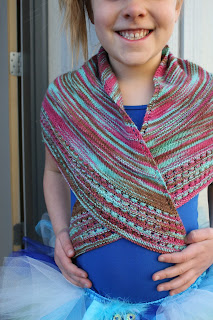 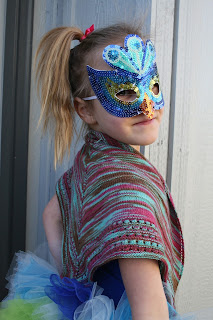 It was convenient that I wanted to knit this shawl and that I wanted to use a fun yarn.  Because of that, I am involved in several knit-alongs (KALs) right now, and I'm glad I managed to grab photos today, because YAY for being all done!!  Granted, this was a quick, easy shawl, but man...I can sure stretch a project sometimes.  I definitely had to take it easy on knitting for a few days, as my back was trying to go out (car accident and then bike accident situations at play, and apparently, sewing and just LIVING is wrecking my back at this point). 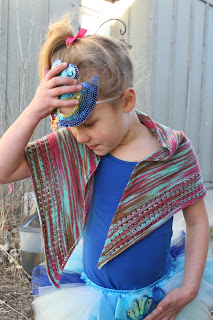 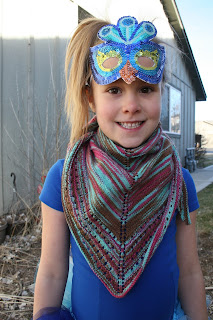 The pattern (my project page) was lovely, and I would have had only one question...but others reached that point before I did, with the same question, so, I didn't have to wait for an answer for once, aha!  Otherwise, crazy easy pattern.  I did one extra repeat of the main body, and I knit maybe two fewer rounds of the garter border, as I'm not a huge garter fan. 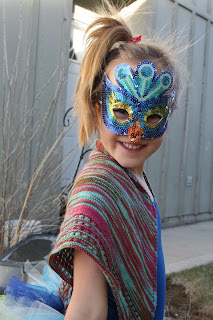 Camden will show it off to her friends at her next community day, but for now...the week in review: 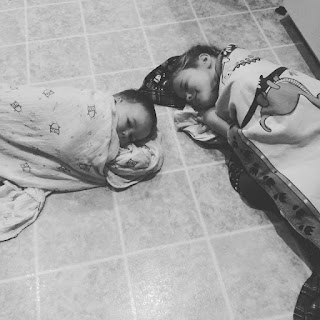 Posted by cottington at 6:55 AM