First Time for Everything! Small Fry Jeans for Camden...and a Cute Figgy's Ayashe to Match!


Camden has never owned jeans at all, so, this is a BIG DEAL, people.

What it REALLY is, though, is all sorts of guinea pig-ish-ness being poured into Camden's wardrobe.  I figure that after a few pairs for HER, I might have jeans-sewing down at least a smidge so that I can attack either the Named Patterns Jamie jeans for myself - or the Closet Case Files Ginger jeans.  One or the other, LOL.

The pattern is the Titchy Threads Small Fry Skinny Jeans, so, I clearly went alllll the way - jeans AND skinny.  Camden actually truly hipstered herself, too, by pulling out her dad's vintage Nikes to wear the first time she sported this outfit, though she sadly styled herself differently this time, aha.  (And speaking of Camden, how loud does her music need to be right now?  Is she a high schooler or something??)

This pattern, by Laura Titchener (super nice lady, by the way, and that link is for her Facebook group!), is actually pretty easy to follow, but I did my usual second-guessing and that sort of thing (go ask Karly over at Paisley Roots, aha!), trying to make it more difficult, though there is one detail I think that bears picking over - well, two, really.  Again, lovely pattern, but I truly think that when I make a second pair, I will skip interfacing the fly guard if I'm NOT doing a zipper.  I didn't do a zipper this time, and interfacing that area just adds bulk, in my opinion, and when there is a little kid belly pushing the pants down (thereby shortening the rise and scrunching everything up), it makes for too much fabric, etc, in one area.  Also, I just may do a zipper, aha, mostly because of the gapping!  (I also wish I knew why there is that extra bit of seam (?) underneath.  Can anyone see that and explain?  I see that it looks worse in this picture than it really is, because of the camera angle, but everything is actually lined up, button-wise.  I might try moving the button over a bit to see if it solves it, but I don't know that this is the issue. 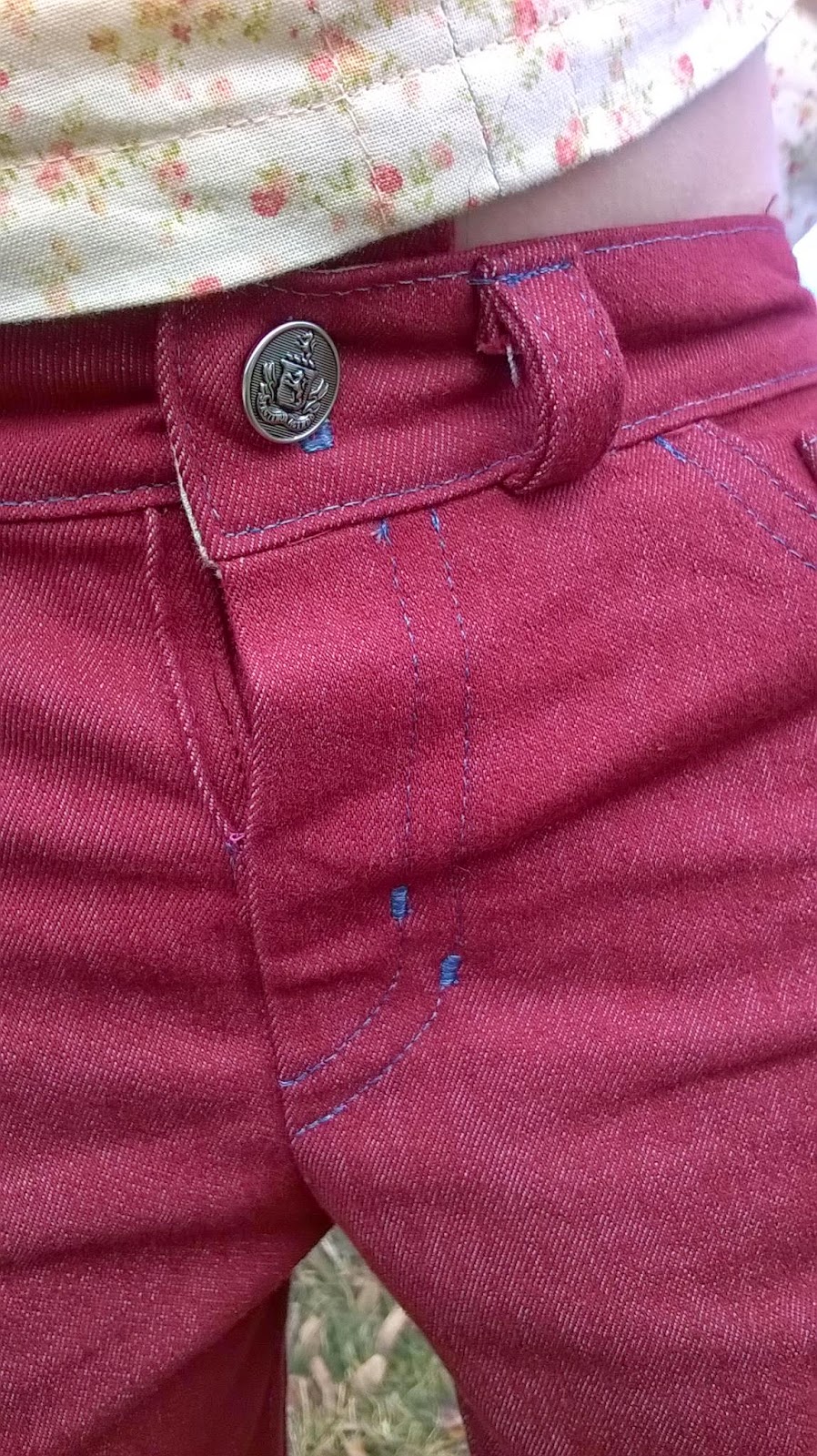 Secondly, I would LOVELOVELOVELOVE for this pattern to be in paper, rather than just pdf.  I wanted to punch my eyes out so many times when I was scrolling back and forth, back and forth, to try and find information.  It could be SUCH a great paper pattern, and information and pictures could totally be condensed.  I don't know of a paper pattern like this on the market (there is a Jalie jeans pattern), and it would be SO lovely.

I was lucky enough to squeeze Camden into a friend's daugther's SFSJ (this pair, over at Irons in the Fire - and note how tall her friend is and how there isn't the bum-bunching/sagging!), and they basically fit, though her friend is taller.  I knew I wanted to take in the legs a bit, and I did, but I wish I'd taken them in more.  Also, I didn't remember to take length out properly when tracing the pattern, so, I didn't hack off the bottoms, and we are just going to fold the cuff twice on these.  I took a teeny bit out for the rise, but these are obviously so long on Camden, and she has no bum to fill them out.  I'm not sure I'm too fussed about it, as she's a wee kid, but when I make jeans for myself, these are things I will work harder on.  And who knows, in a pair or two, I just may put in a bit more effort for her jeans, too. 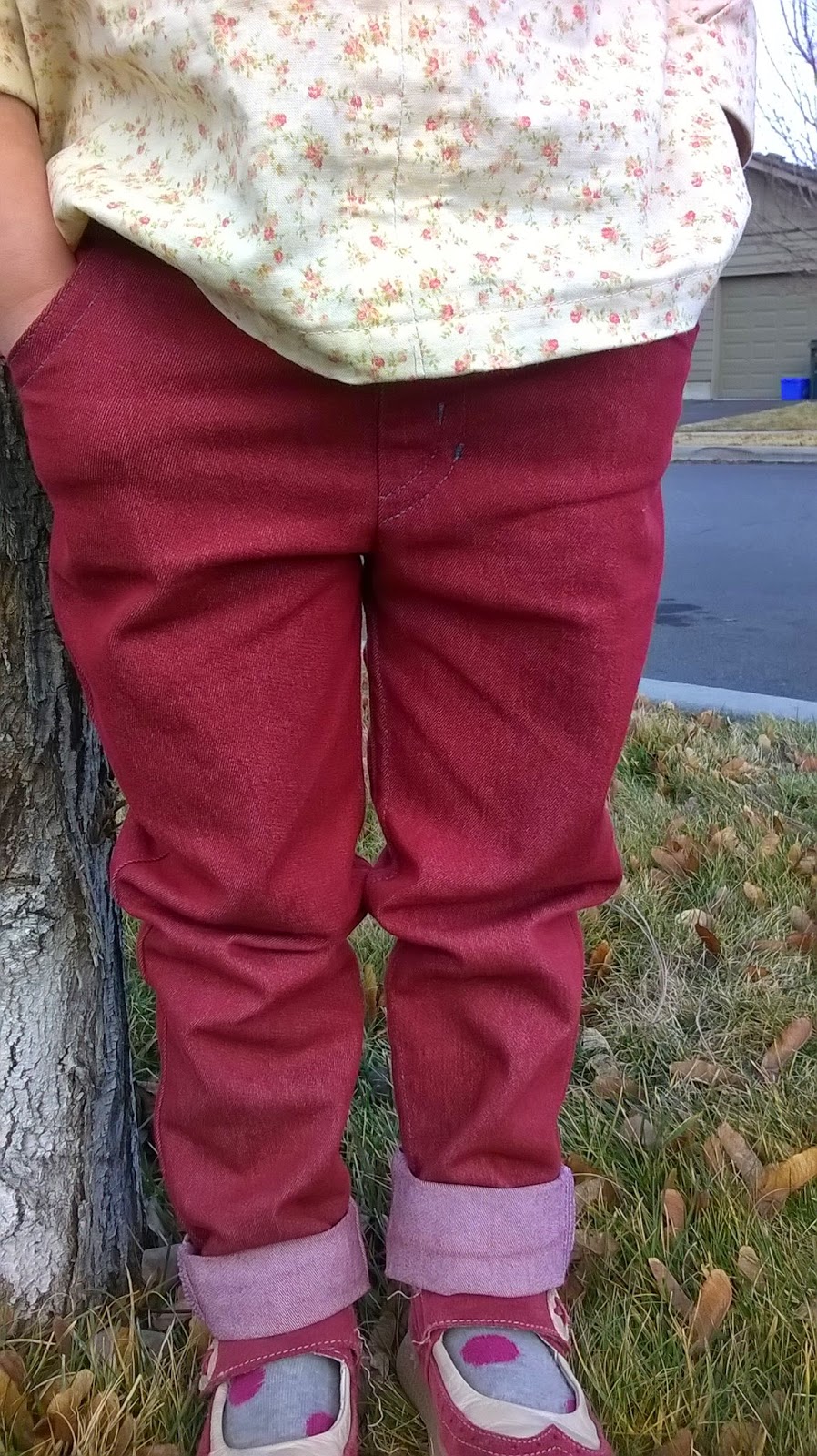 I used a stretch denim I picked up at Hancock Fabrics or Joann Fabrics....can't recall which, sadly, as I bought denim from BOTH places, LOL.  I know it's heavier on cotton than polyester, as just buying polyester makes me cringe, anyway.  I am pretty sure it was Joann Fabrics, now that I think about it!  Similar to THIS?  And I picked up a few spools of denim top-stitching thread at Modern Domestic when I was last in Portland.

Let me just say how FUN flat-felling is to me!  On the back seam of the jeans, I did flat-fell opposite the direction of what the pattern says, as I wasn't sure why it's supposed to be done that way. It turned out fine, so, i'm glad I did it.  For this pair of children's jeans, my machine worked just fine, and I used a denim needle throughout.  I also like the new Rowenta iron I received for Christmas from my mother-in-law.  It did a bang-up job on these jeans.

I did a couple other things differently on these jeans:  I am not a fan of buttons on elastic, as I don't like exposed elastic.  I thought for a bit about how to get around that on this pattern, as there are no side seams on the waistband.  I came to the genius conclusion (to me, anyway!) of keeping the waistband facing seam open on either end of the butt, sliding the elastic through, then closing both spots.  I hid the stitching for the elastic UNDERNEATH two of the belt loops on the back.  Granted, you can see the stitching on the inside, but I'll survive for now. 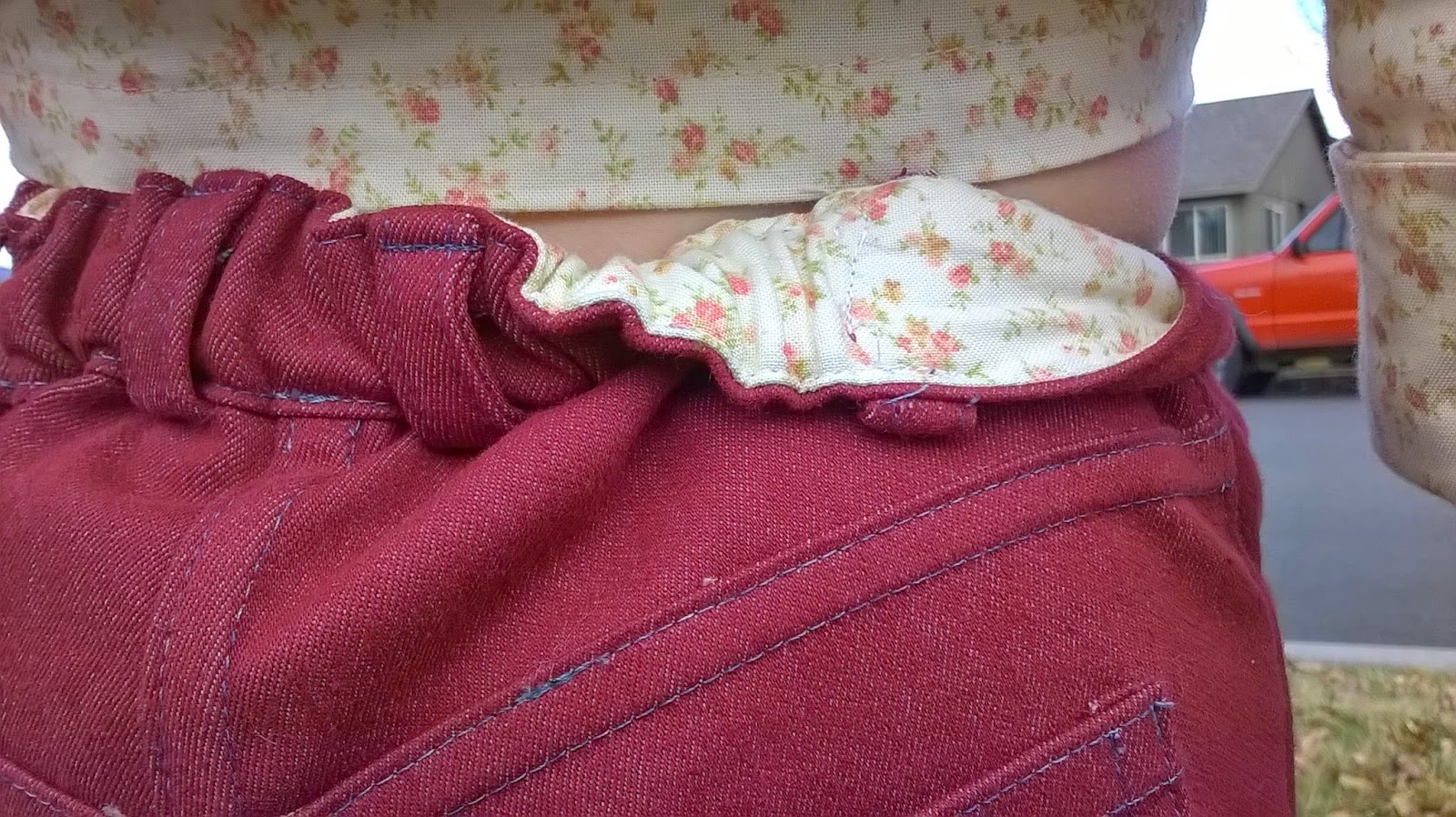 Secondly, I down-sized the back pockets, as I'm not a fan over overly large pockets on small children, and I think I did okay with sizing - and I didn't get too fancy with pocket detail, but I did a little something, aha! 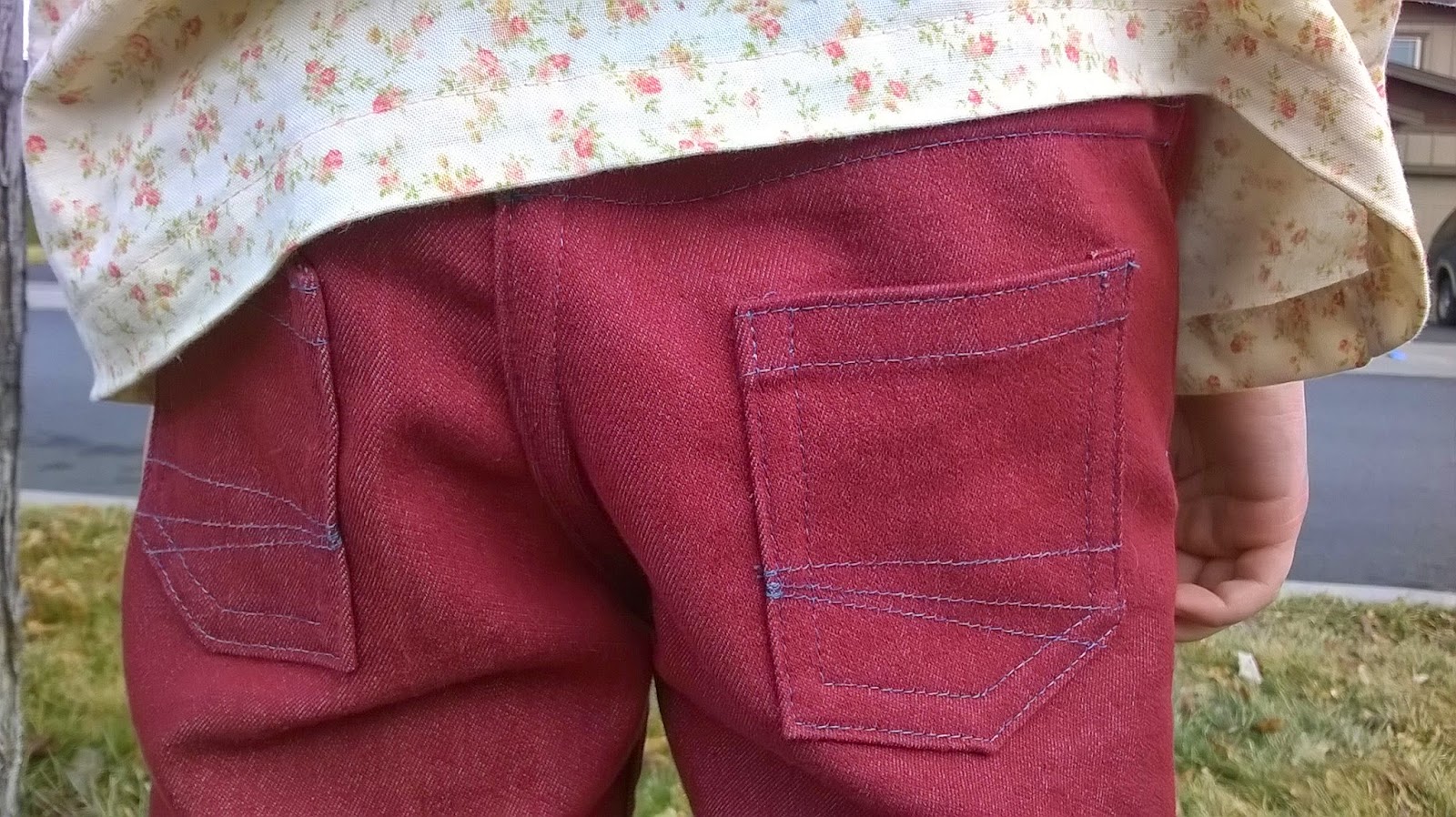 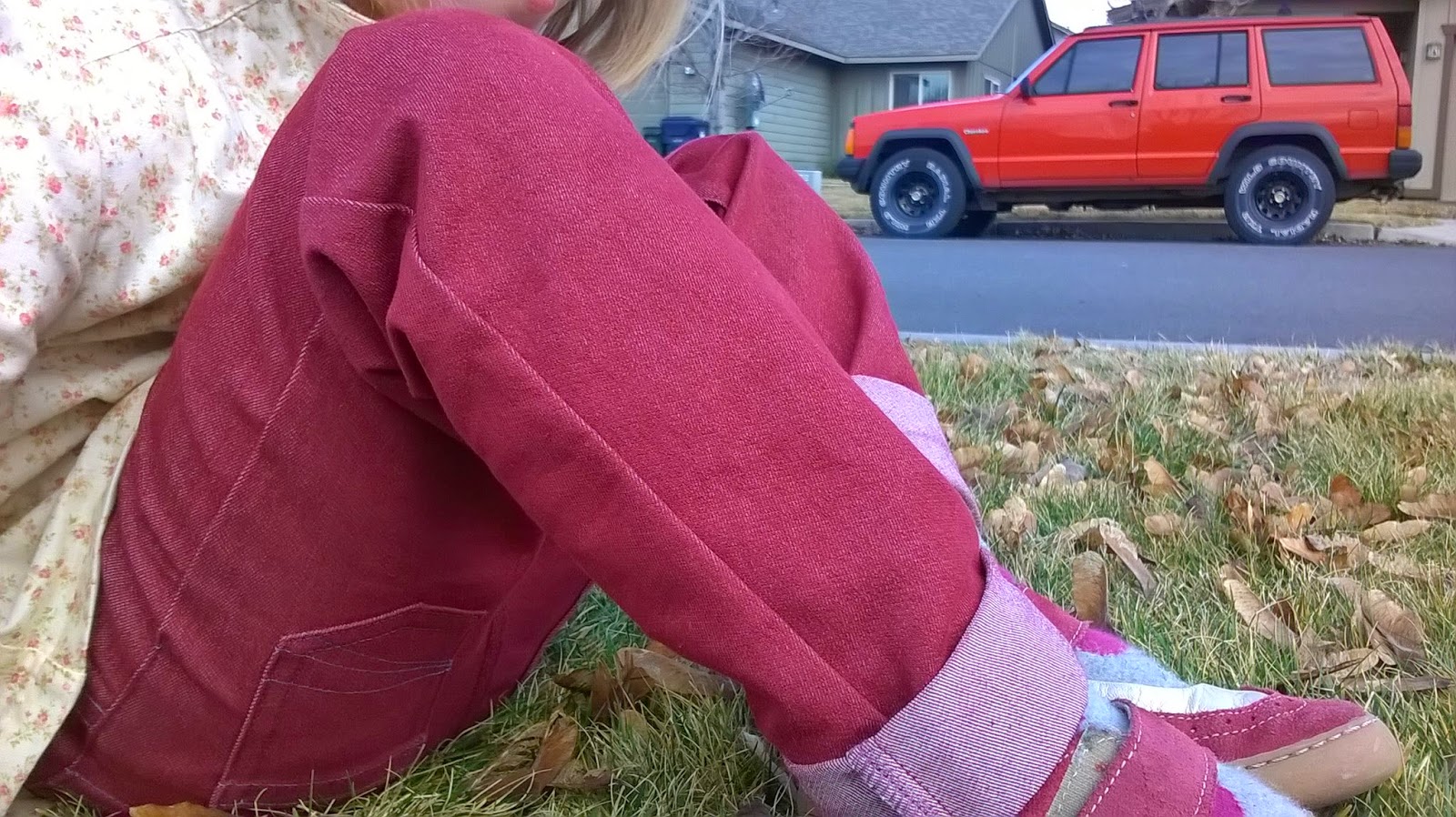 An interesting thing to me, also, is that I interfaced the waistband facing, as the directions tell me to (I believe), but I have an issue where one end of my outer/denim waistband is stretched, as you might be able to see in one of the pictures above.  I'm totally bummed out about that, and I think that next time, I'll interface the denim itself.  That may be a faux-pax, but again, I'll survive.  Silly me, though, in that I wasn't thinking and sewed the button hole vertically, rather than horizontally.  Oops.  Also, I only just happened to have one jeans-like button lying around, LOL, so, I got lucky ;)

Whew.  Overall, pretty stinking cute, even if they're a bit saggy (which clearly would take fitting adjustments galore).  I'll take in the legs a bit more next time, and I'll make sure to take length out. 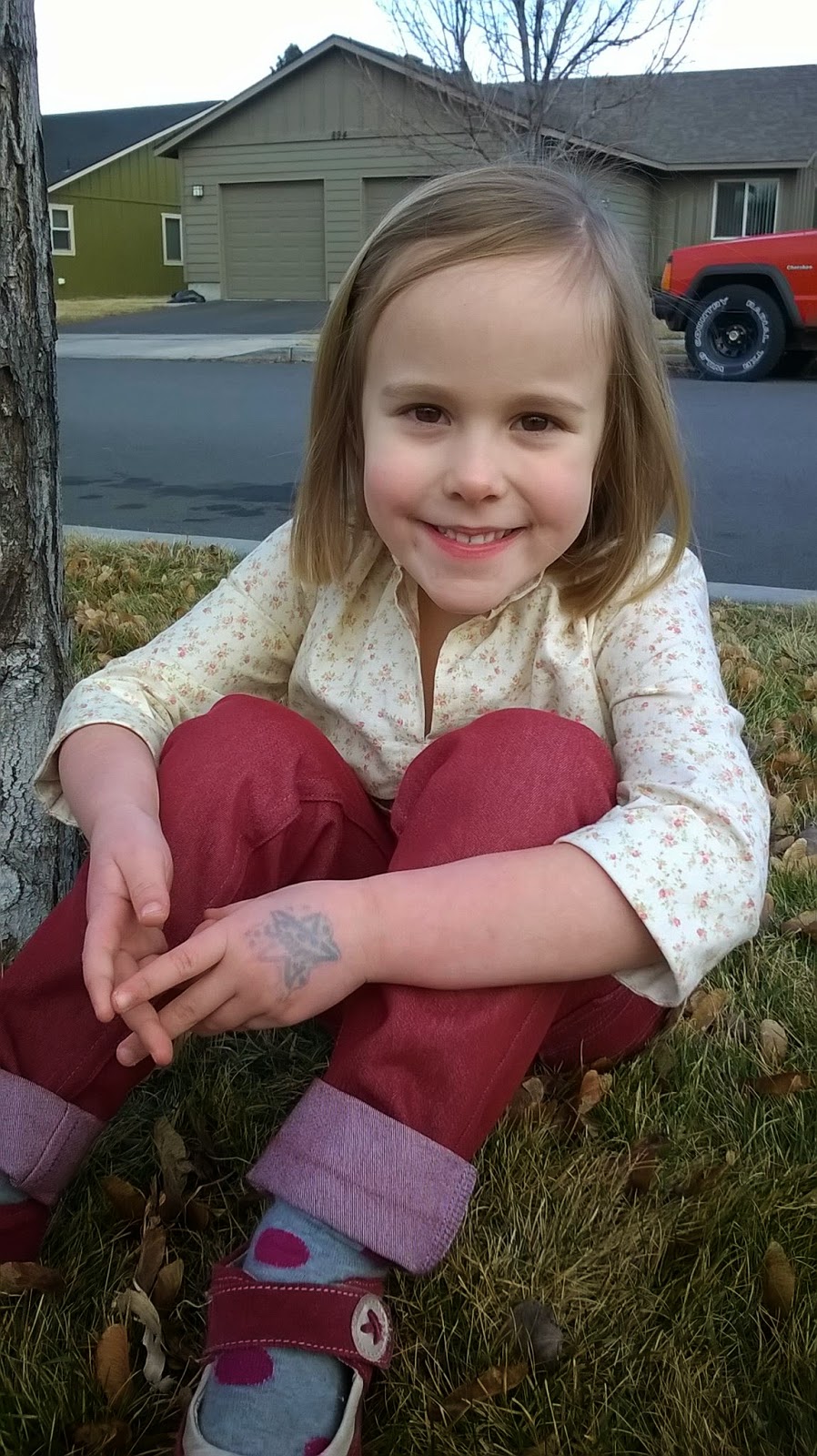 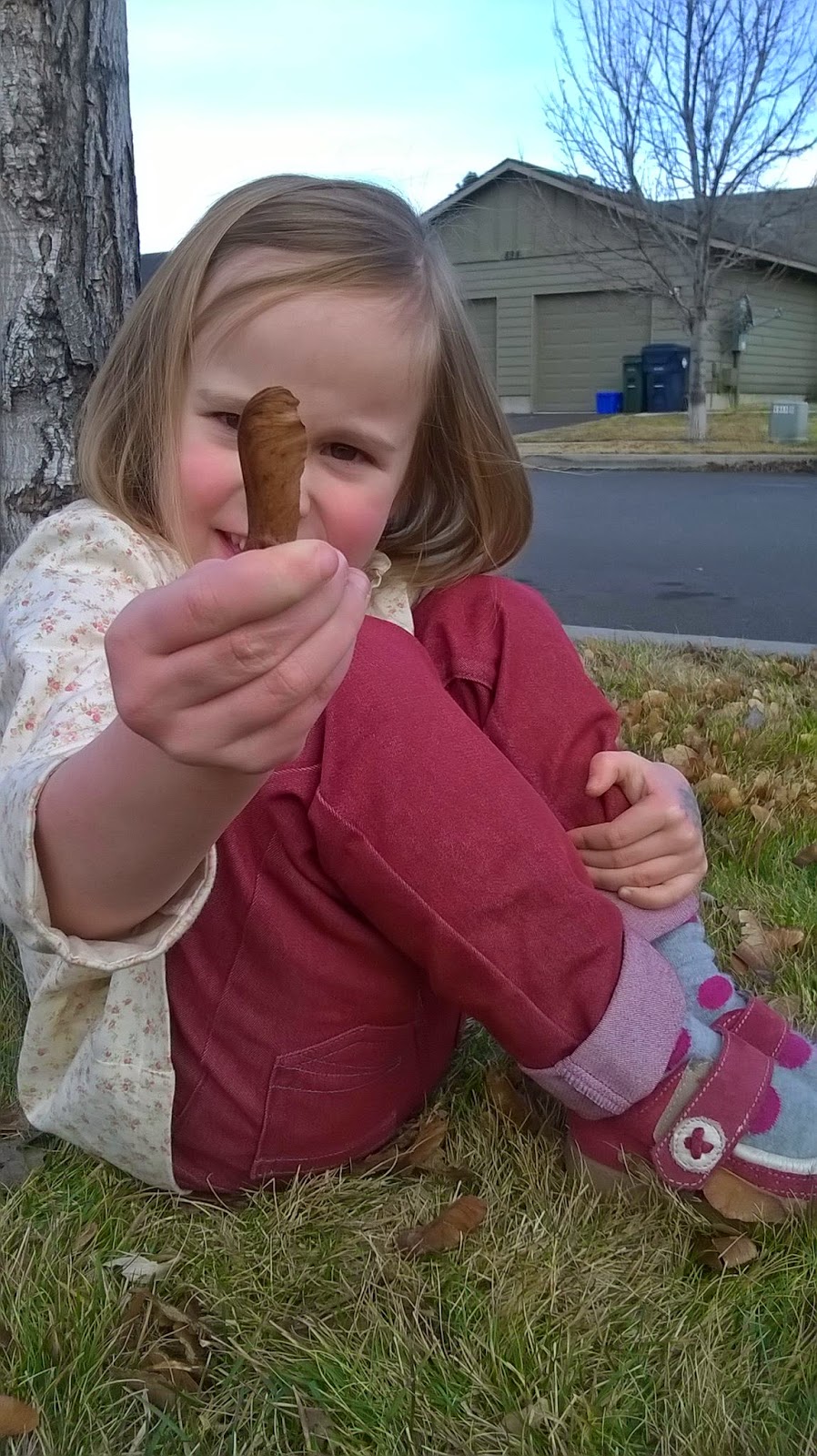 To match, I sewed up a Figgy's Ayashe top, which is a go-to pattern I love (clearly).  I definitely used fabric from Joann's, and this was a relatively quick sew.  I'd cut out this pattern (and the jeans) before Christmas, and I'd drafted a sleeve cuff, just to make it a teeny bit different from all the other Ayashe tops I've sewn.  It's nothing fancy, and it's the first time I've done something like this.  I opted for the first time to NOT use elastic at the waist - again, just to be different.  I think it works.  I added a bit of length to the blouse, so, it's clearly long-ish on Camden, but it'll fit quite nicely in a mere few months, naturally.  And I like to add a tiny bar-tack of sorts at the end of the neck slit, as it can tear open quite easily. 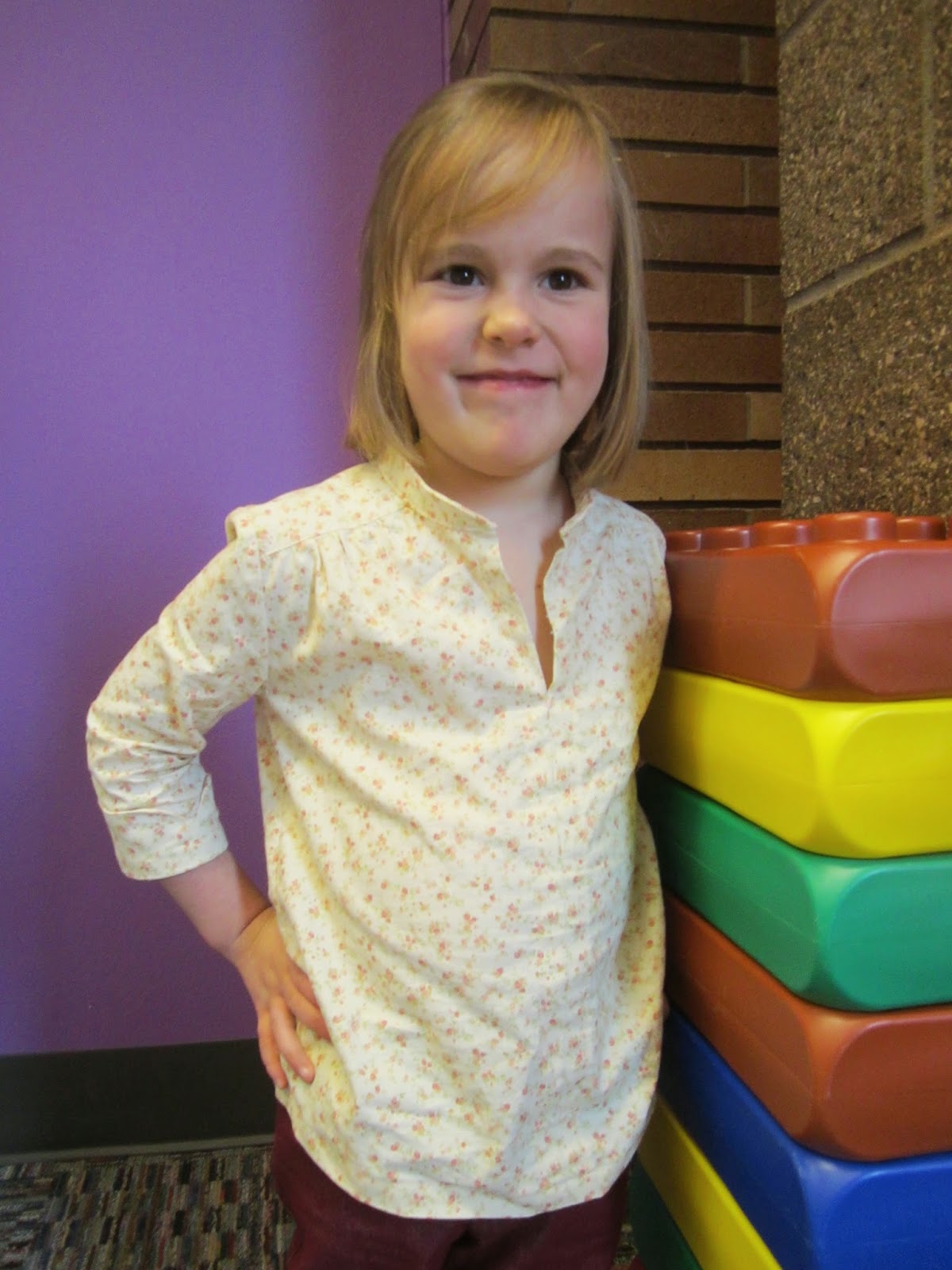 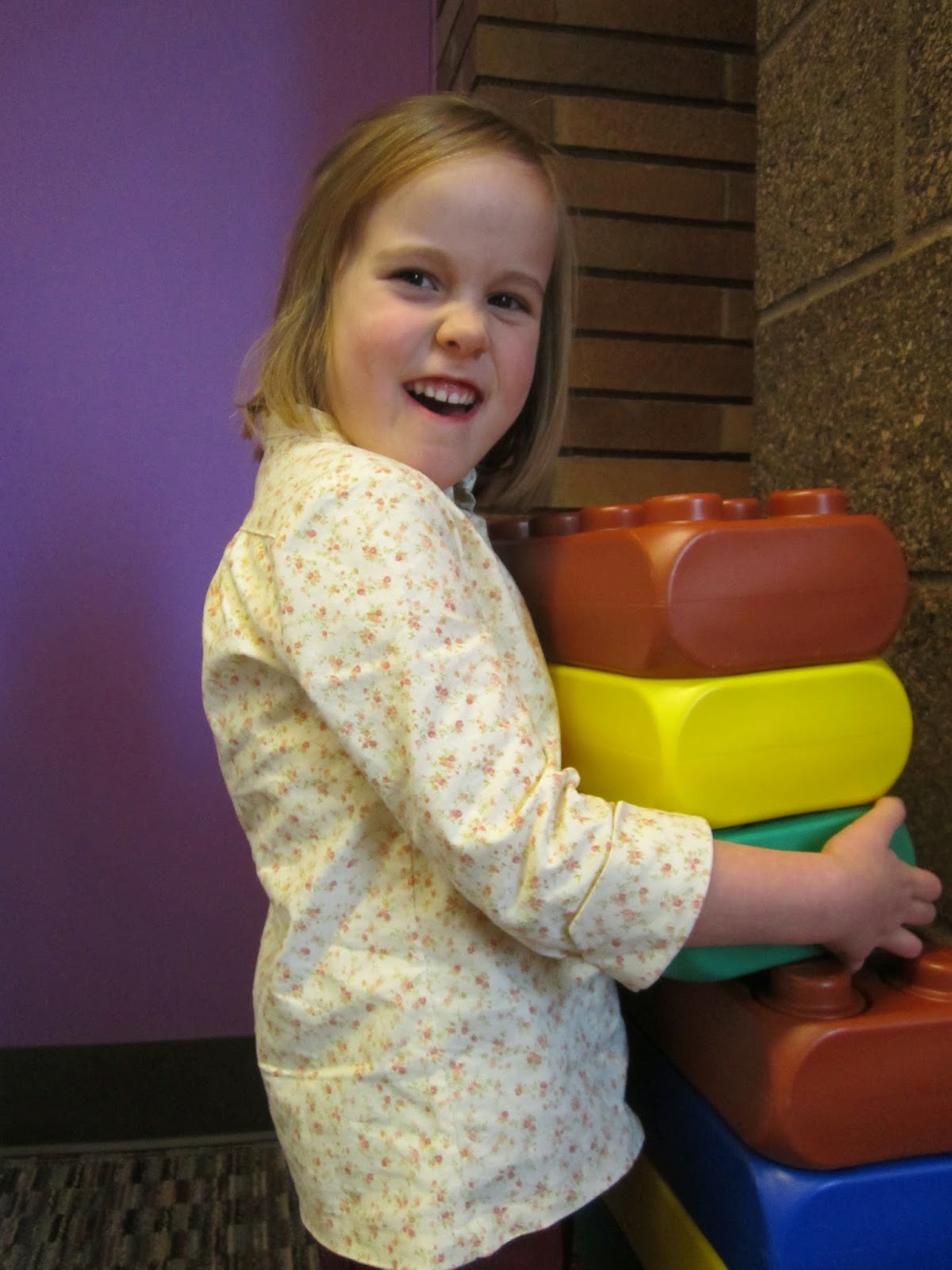 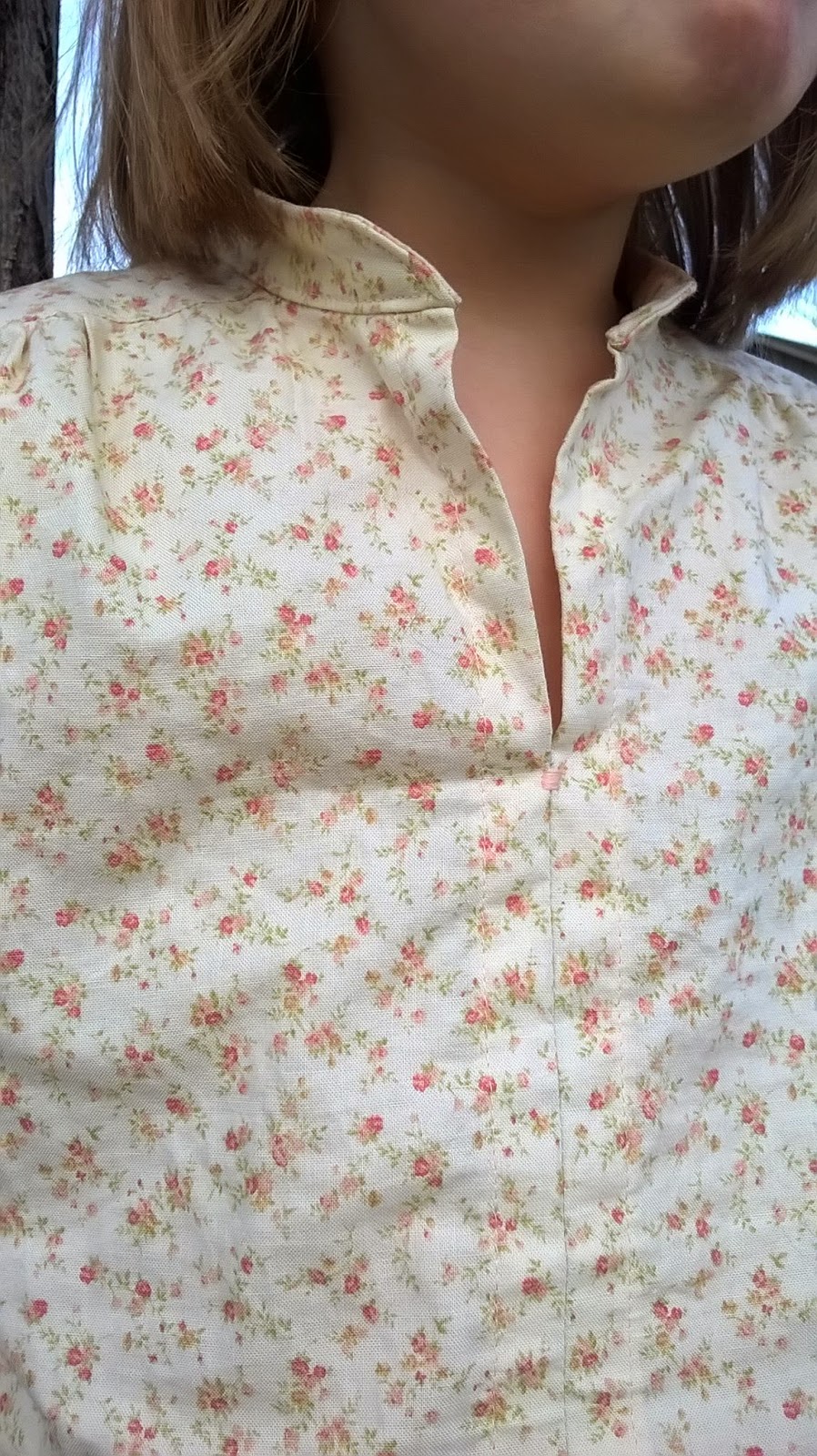 Basically, it's a super-fun outfit....nothing fancy, but a sort of fun, hipster effect! 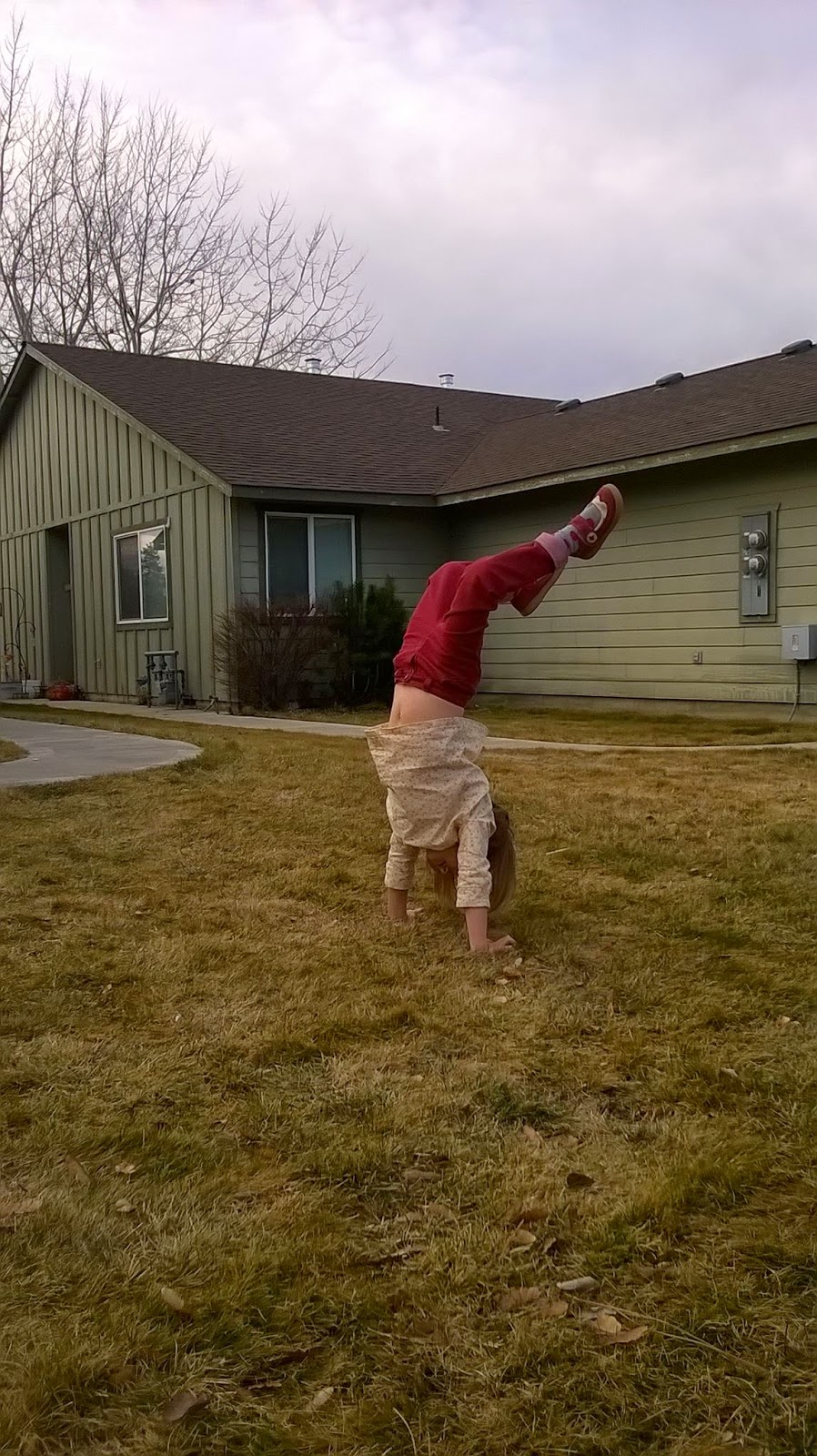 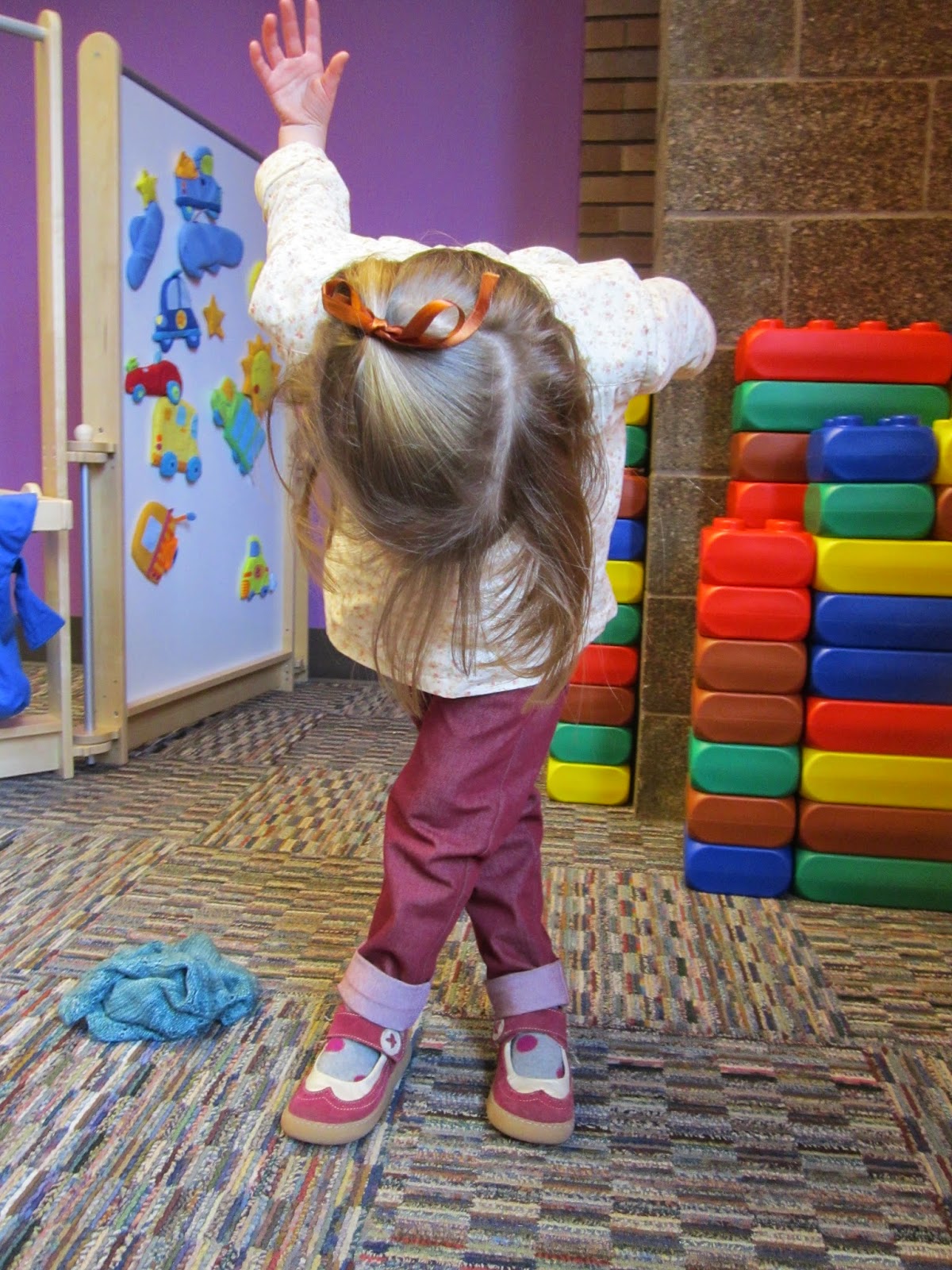 Also, Camden practiced sewing for the first time on a machine today!!! 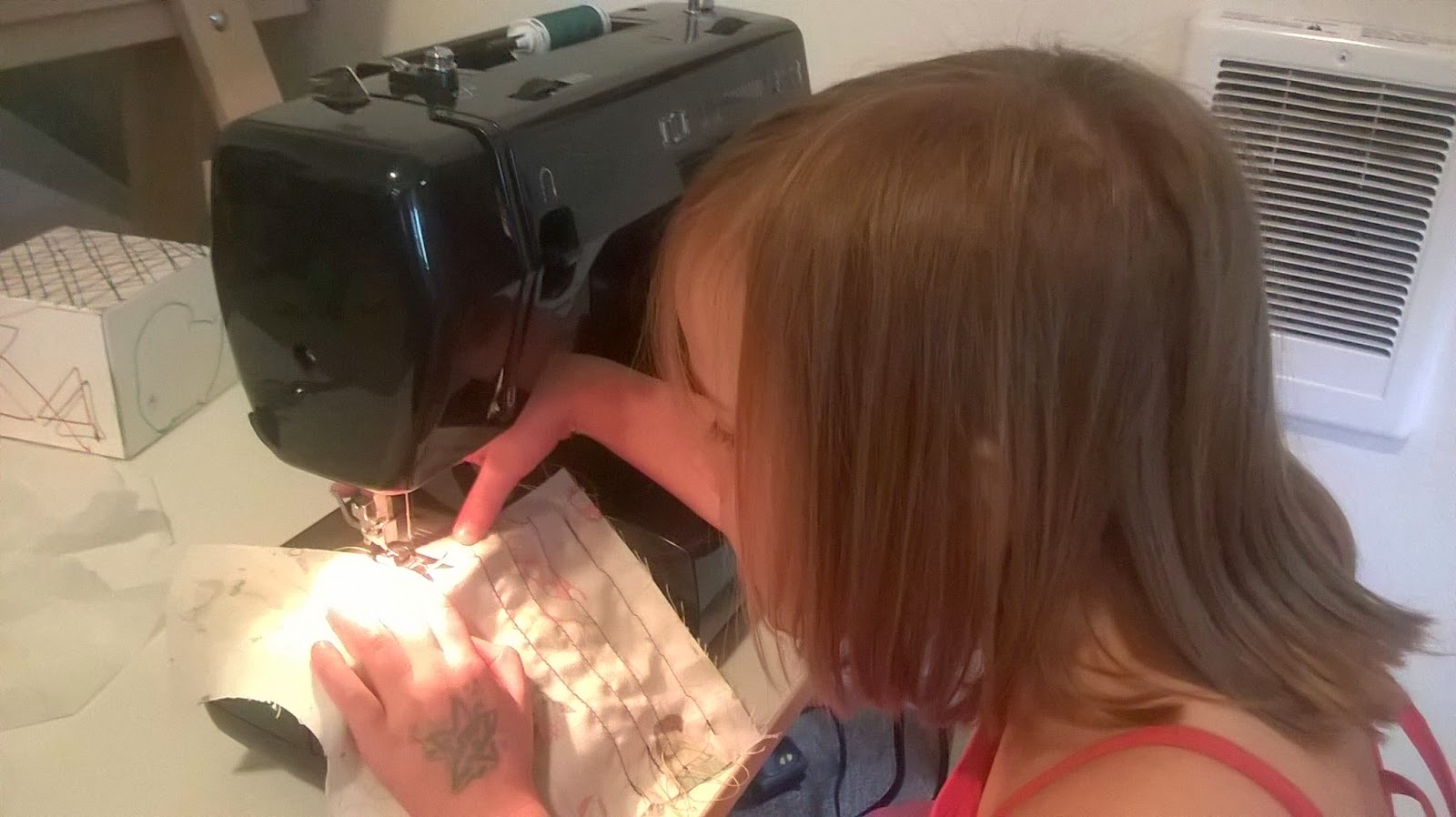 As for projects I've been working on....?  I still have Camden's Make Mine Strawberry sweater on the needles, as well as my Homegrown sweater.  I hope to finish Homegrown within the next two weeks, then I will follow up with the two sleeves and one button-band on Camden's sweater. 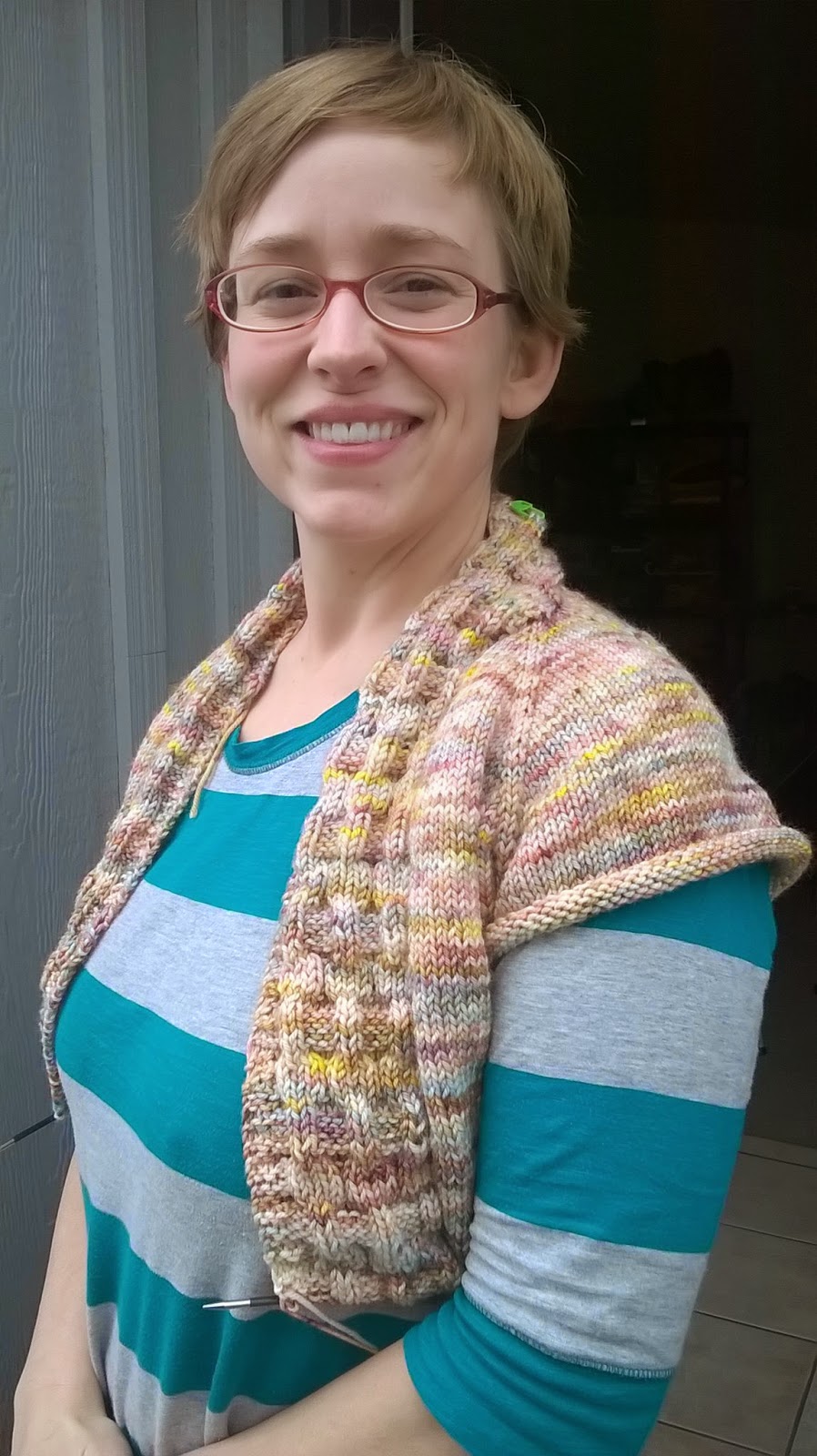 This post is project picture-LIGHT.  I suppose that's okay, as these are SOCKS, after all.
I held onto this yarn for pert' near 5 years..The yarn and pattern were part of the Knit Purl sock club that I think is no longer in existence, though I could be wrong.  Funnily enough, I should NOT have participated in the club, as I like all the actual yarn, but I wasn't as into the patterns, sadly.  I've used two of the six skeins of yarn, I believe - one was gifted to a friend a couple years ago (knitted into a Cookie A. sock, rather than the pattern that matched the sock), and now I've finished this one. 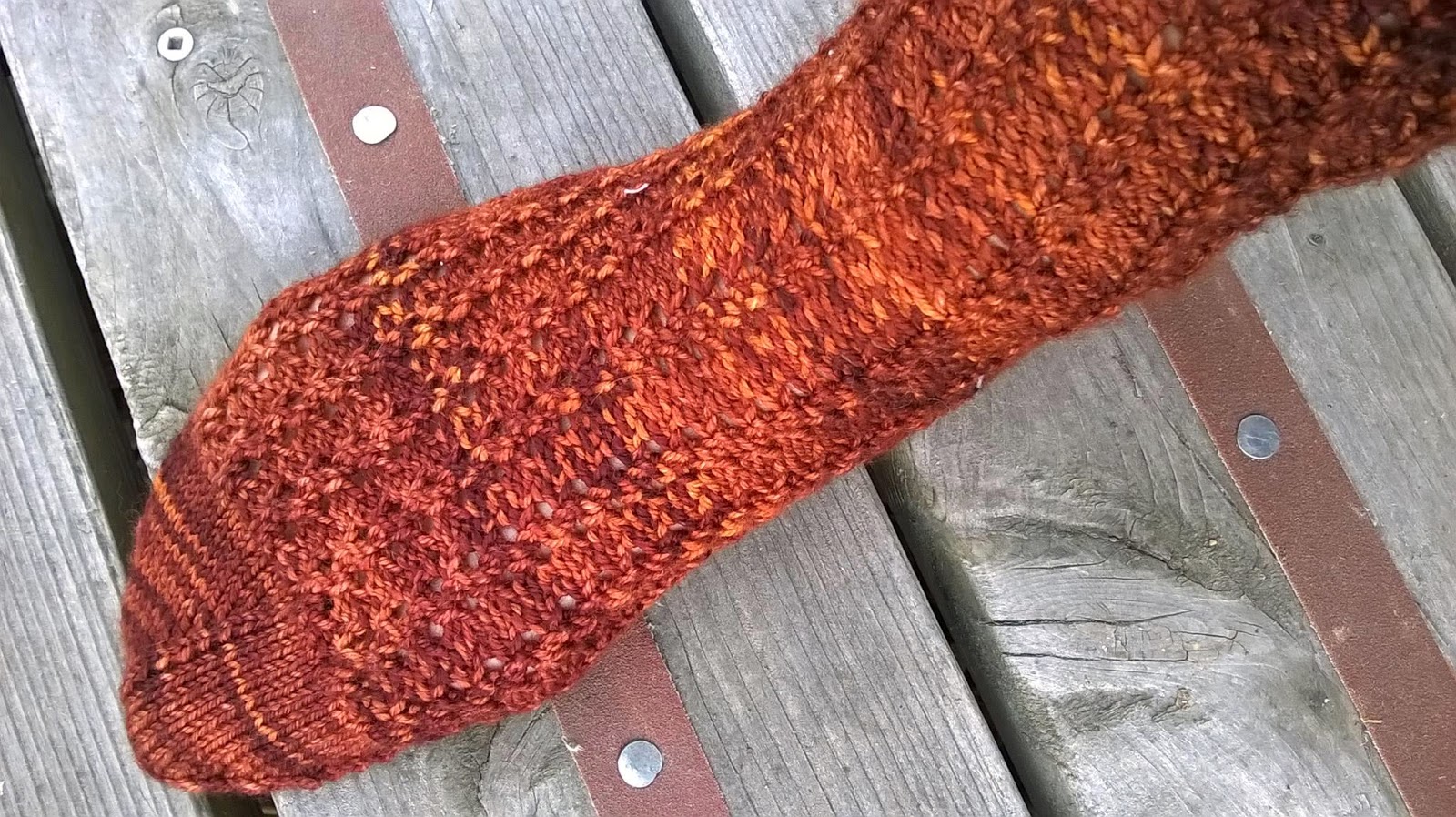 I love both the yarn and pattern.  The Cobblestone sock pattern was designed by Nancy Bush, and I met her at the first-ever Sock Summit (no working link) so many years ago.  I also lost the pattern temporarily, and it's not available for purchase on Ravelry, but Nancy was awesome enough to send me a copy - then the pattern was located...and lost again, aha! 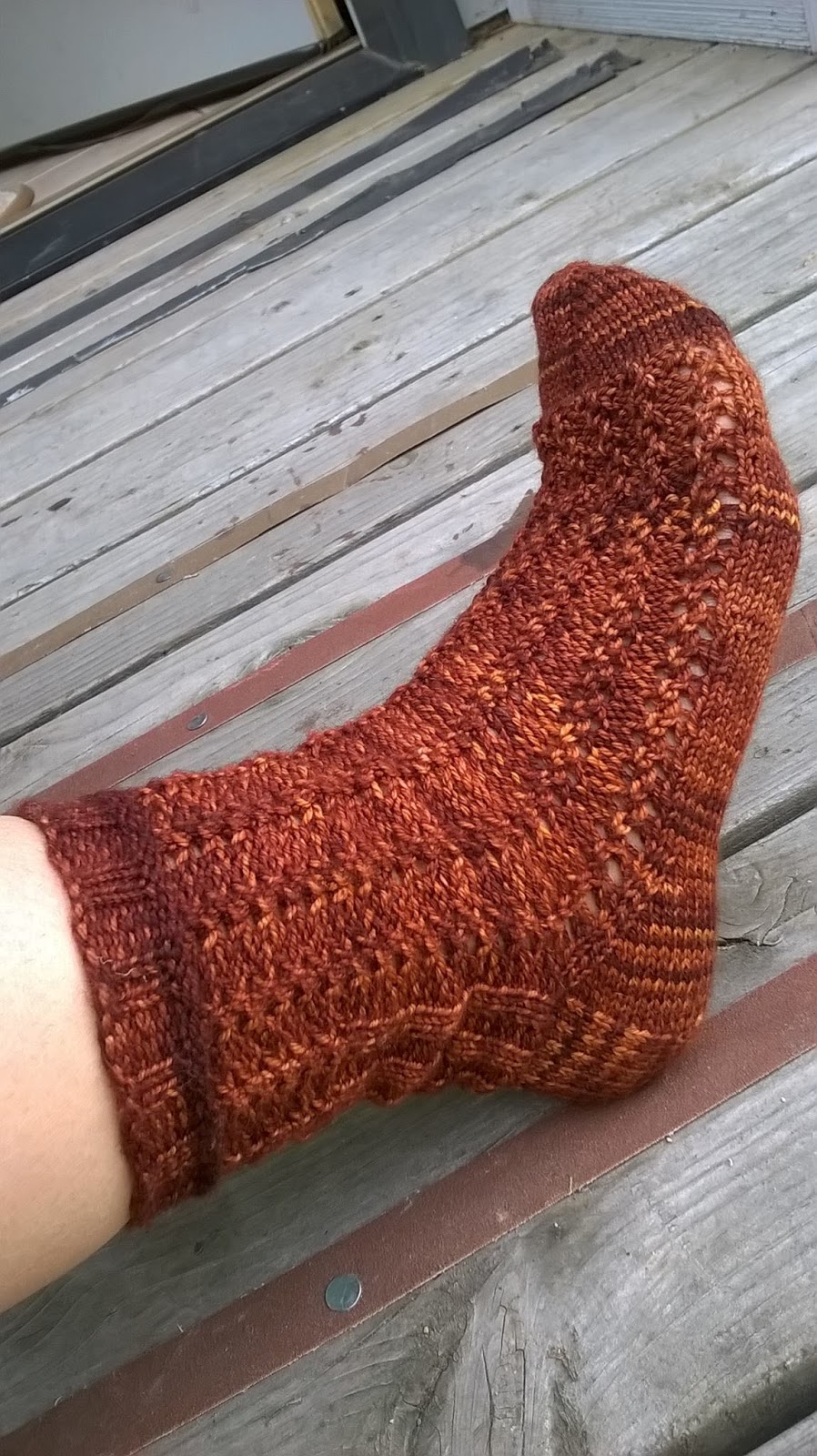 The yarn is a merino/nylon/cashmere blend - Casbah sock by Hand Maiden yarns.  The pattern is great, easy to memorize and creates a pretty effect.  I did knit on size 00 needles, which isn't the normal needle for me.  On socks with a gauge of 8 spi, I would normally use 000 and cast on 64 stitches, from what I can tell so far.  This pattern had me cast on fewer stitches, and the gauge was looser.  That's fine and great - I wore them today, and they're cozy....but at this gauge, I do think I need fewer stitches as the sock gets closer to my ankle.  Not a biggie at all.  I am dying for some more cashmere blend socks, aha!

Anyway, that's that for the socks - I'm soooo glad they're done, as I cast the first one on during our trip to Michigan...LOL.

As for our holidays, they were lovely, and Camden received some awesome puppet-making materials from her grandma, which is great!  She needs to practice her actual puppet-show skills a bit, though, aha!  Also, I have a new iron, a Rowenta that I already love :) 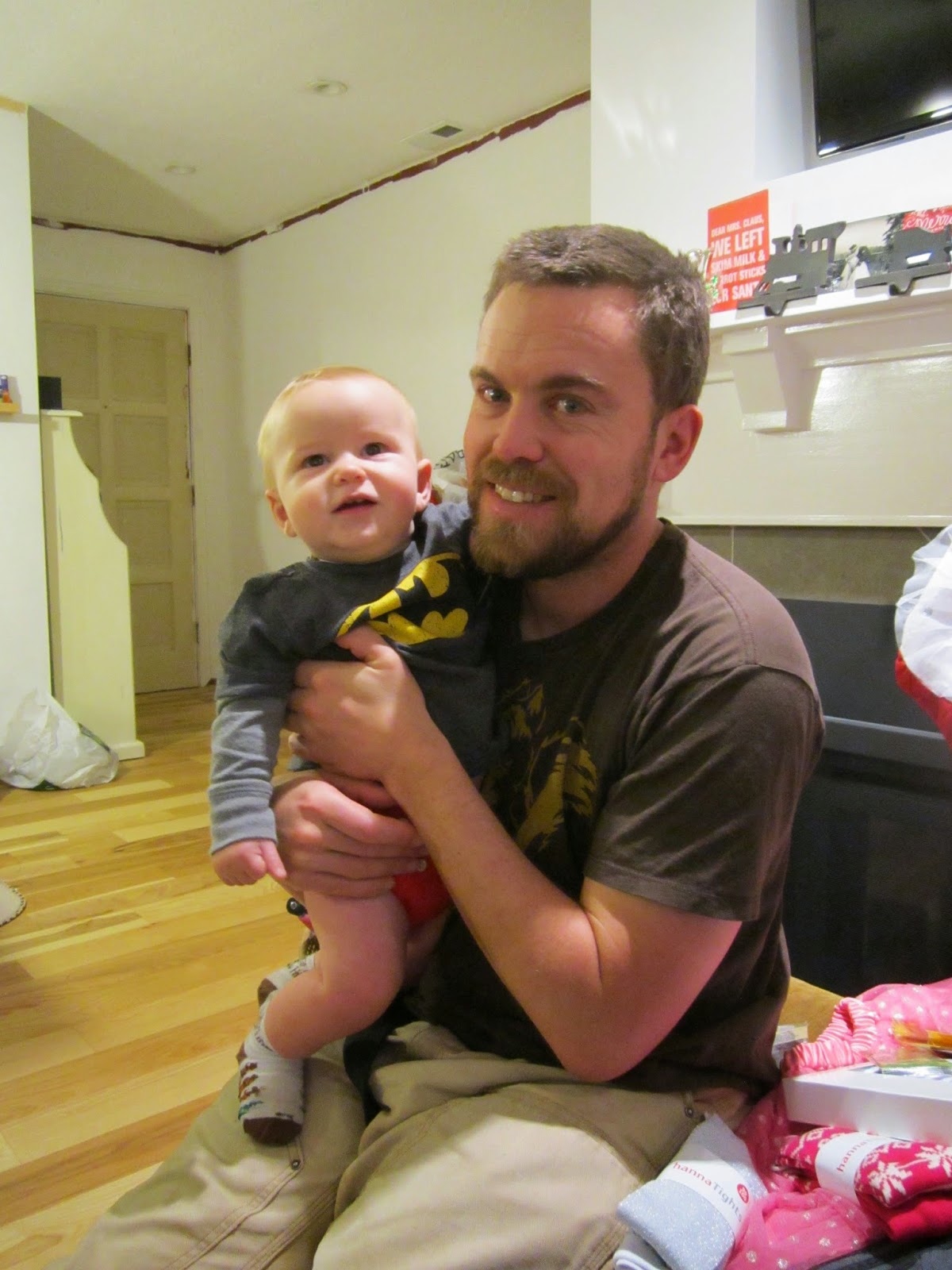 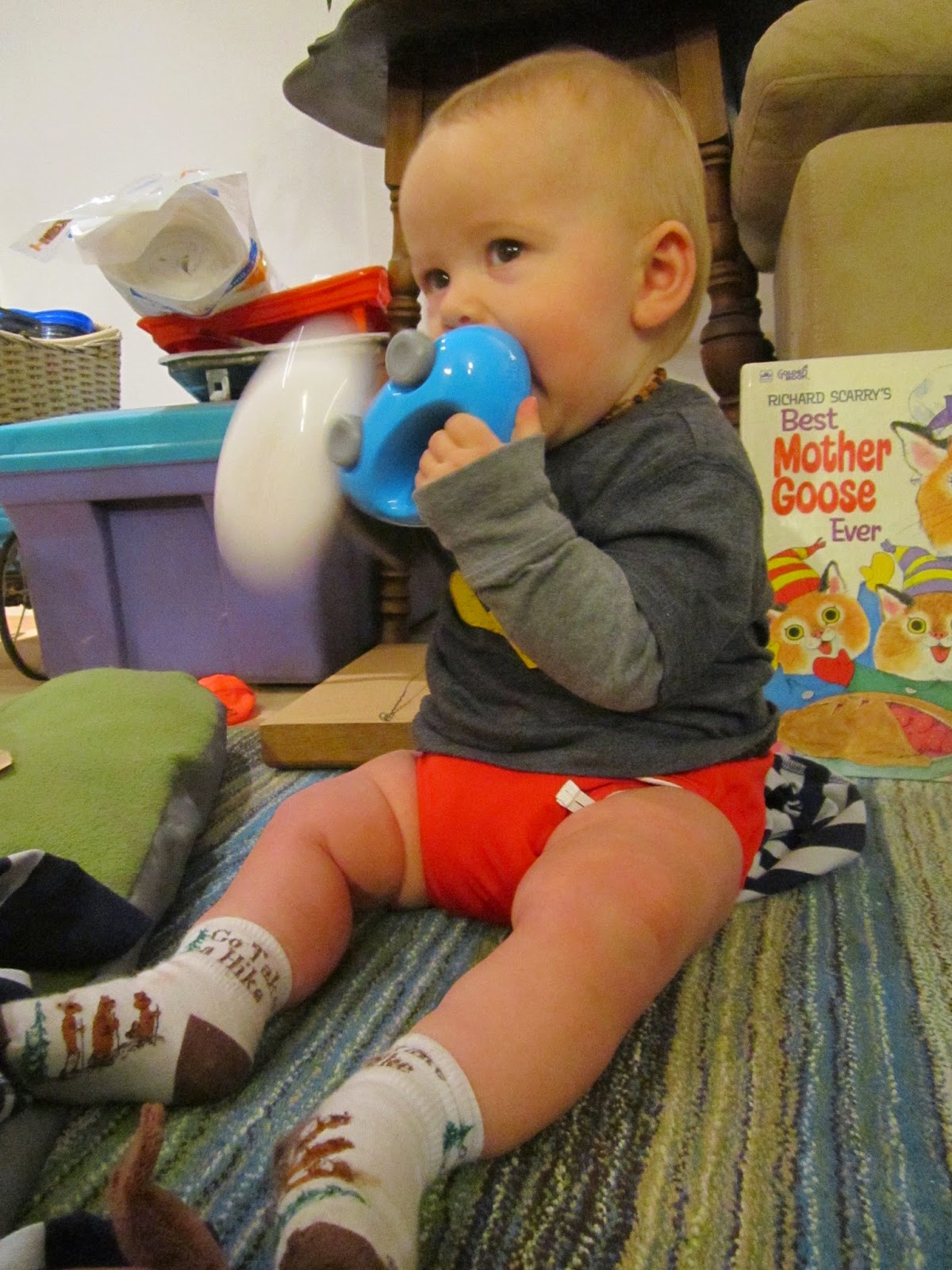 And...Camden was able to meet up with her awesome Vancouver friends, Lizzie and Jack!  They had a lovely time at the library of an afternoon...running around and being crazy, as usual ;)

Posted by cottington at 6:12 PM No comments: