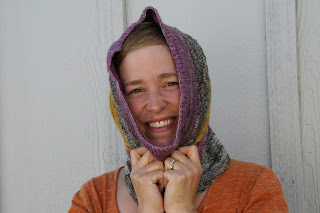 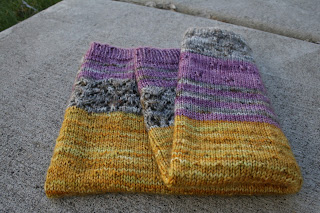 Blocking creases and my healing lip aside, this 3 Color Cashmere Cowl is crazy awesome.  It happily knit up in two weeks (thank YOU, Joji Locatelli - FB page - for a mostly-mindless pattern).  The pattern is crazy easy, though I did have to back out a few times in the lace portion...missing yarn-overs and whatnot.  Silly stuff. 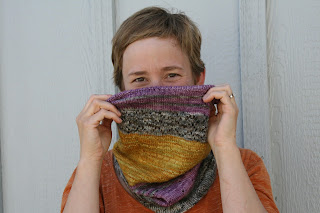 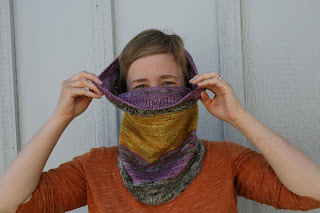 What WAS difficult, though, was the choosing of yarn.  I knew from the beginning that I wanted to use Voolenvine yarn (FB page).  I believe I originally planned this out, and I had ordered three colorways, enlisting Kristin's help in complimenting colors.  I had wanted to use Dirty on Purpose and Nevermore, both on the Wolke base, a lovely merino/cashmere/nylon blend, but that proved an ill match.  Nevermore didn't stand out enough against the Dirty on Purpose, especially where it mattered in those thin stripes.  Royal Amber was the one constant, LOL; it seemed to look good with anything!  I pulled out a million skeins of yarn, knowing I just couldn't use Nevermore.  And, as luck would have it, because I really WANTED to use stash yarn, I was unable to locate the right sort of purple or teal (first-world problems, but LEGIT problems, people), which I knew would be great contenders.  So, I had to put off casting on until a trip to Twisted in Portland.  I knew THEY would probably have a lovely skein of Hazel Knits (FB page that would work.  I ended up finding just the thing in the Entice MCN, in the colorway Orchid.
It all worked out in the end, and the cowl only took me about two weeks from start to finish, which was awesome (though it felt LONGER, what with fingering weight yarn, aha!). 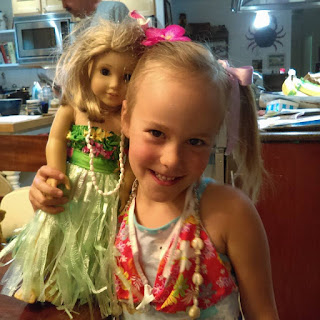 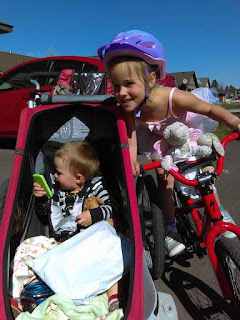 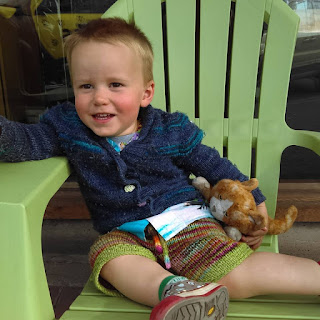 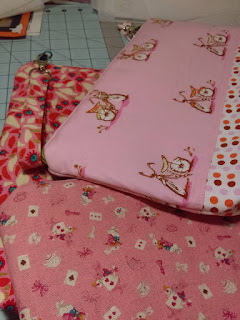 And below is a cool Link-Up Party I'm a part of over at Paisley Roots this month!  You know....Karly of Saffron dress fame????

An InLinkz Link-up
Posted by cottington at 7:26 PM 4 comments: 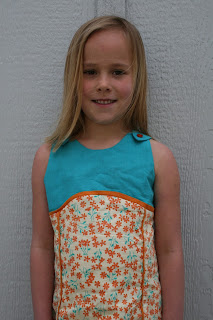 Let's not get too hasty...Camden sort of had a tea party-themed birthday, but not really.  I made teacup-shaped invites, and we made butterfly-shaped placemats (that blew all around in the wind that thrives in Bend, OR)...and I meant to make a butterfly-shaped birthday cake, but that totally didn't pan out (at least it's GOOD cake!)  Anyway, best-laid plans and all that aside, the kids had fun, and it was a gorgeous day!  I took not ONE single picture, and I'm now a bit sad in realizing that.  I was too busy trying to keep candles lit and things from blowing away, aha! 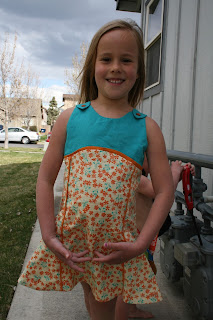 Back on topic, though!  I made Camden a fourth Tea Party Sundress by Oliver and S.  I last made one in 2014 and blogged about it here.  I always LOVE this dress.  The sad issue is that Camden has run her course with this pattern.  I officially made her the size 5 - AND lengthened it.  It's definitely still a bit short.  I added an inch to the hem and sewed the bodice length with a smaller seam allowance then did the same with the bodice/skirt seam, just to give it that much extra.  No worries, as it's still cute, but this pattern ends with size 5 - understandably.  It wouldn't be quite as fetching to see it on an older child.  The bodice DOES have a tendency to look wider, compared to the skirt.  There exists an optical illusion, just because of the piping, but also because of the flare.  It's just definitely a little girl dress, and one of these days, Camden won't BE a little girl!  :O 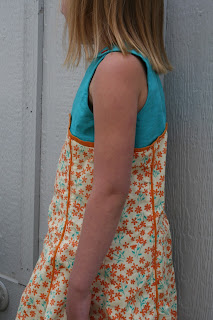 I used the same bodice fabric as I used for THIS dress, which worked out nicely, and I again used deep stash fabric.  It feels good when I'm able to use up some of the cuts I already have, rather than buying more, when I really can't afford to.  Camden really wanted some sort of blue, as in ELSA blue, but I had to keep insisting that sort of blue wouldn't quite work, aha! 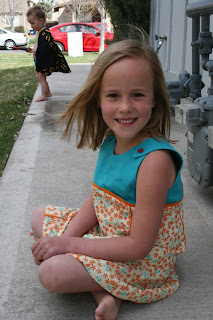 The pattern is always delightful to sew, but insert a million disgruntled faces here:  I totally recognize that my flat piping looks WONKY, and I went against my better judgment and cut it the width the pattern calls for, though I'd been thinking of cutting it just a bit narrower.  Too bad, so sad for me, but that's a bit of a bummer, as it looks too wide and crazy.
It worked out well, and everyoone at Camden's party loved it!  It's always nice when other people notice her me-created outfits.

Up next for me??  I have yet to blog about a new skirt I made Camden, and I have plans for a few more outfits, but.......NO sewing this week!  A friend and her family will be in town, so, I hope we get outside quite a bit!  I also just bound off a cowl, and I hope to sneak photos of that this week!

A bit of a weekend in review! 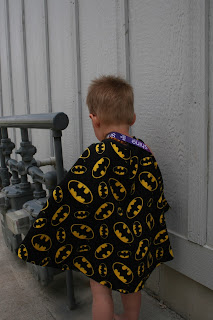 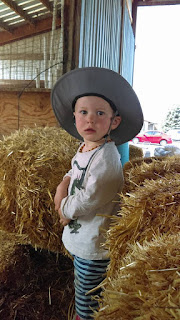 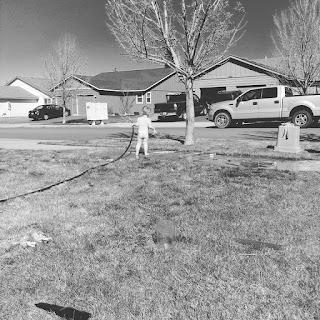 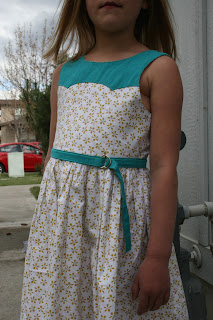 Here it is, folks - a second Disco Dress by Ainslee Fox Boutique.

Remember when I sewed THIS version last year - ALSO for Easter??  Aha!  It might become this holiday's staple.  It's cute and easy, so, why NOT?? 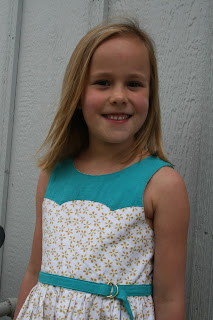 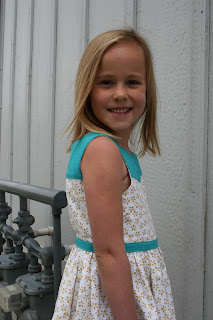 I searched through stash fabric, and I think I turned up with the last bit of fabric in a larger bit of yardage, which was great!  I needed a coordinating color, so, I picked something up at Modern Domestic a few weeks ago - something that worked for this dress and the next one I'm blogging about.  Yay on both accounts! 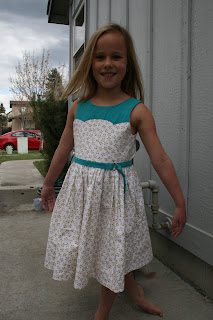 The pattern worked up quickly and was easy to follow, same as last year.  I did remember the belt was a bit long, so, I cut that shorter, and again, I made Matt run to Home Depot to grab D-rings, but he failed me :O  He grabbed crazy D-rings, but my friend, Lisa, came through in the end!  I love the final result, though I swear the back placket came out funnier than last time.  I probably sewed something a bit off, I suppose, but the triangle area seems off somehow.

I was also super happy to find cute, matching buttons in my stash - totally vintage!  I purchased them whenever-ago/sometime last year at an antique store here in town.  They were originally 29 cents, though I was happy to sacrifice a couple bucks or however much. 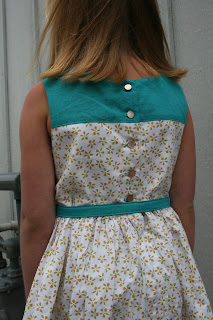 All in all, a success, and it works out, too, that this year's Saltwater Sandals matched!  Just like last year!  Not sure I'll get lucky three years in a row, but I can't wait to tempt the fates about twelve months from now ;)  (On a related note, I wanted some Saltwaters for myself, but they don't seem to quite fit my feet, which makes me sad!)
And a bit of a week in review! 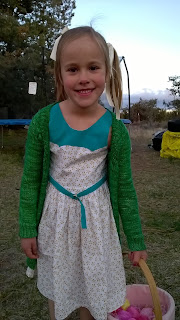 Posted by cottington at 9:01 PM No comments: