Two Times the 2 and 2 by Oliver and S

It happens to be super early, Thanksgiving morning.  I have cupcakes to bake in a few hours, but while everyone sleeps, I thought I'd whip up this blog post before our fun weekend ahead.

A bonus of sorts...and a mini catastrophe:  I did manage to use fabrics from my stash - for allll four pieces - SCORE!!!  I also managed to cut one of the tree blouse pieces UPSIDE DOWN - NOT score  :(  You will note this creates a bit of a problem when using a fabric from your stash....this print is no longer available (and in my searches to replace it, I found the other coordinating prints from that line - who knew?!).  I finally found it on Craigslist, with the help of some other "researchers"  ;)

Yesterday, I managed to snag a few pictures of the Oliver and S blouse and skirt set - the 2 + 2.  I tell you WHAT:  It is MUY DIFFICULT for me to take pictures of pleats.  I probably should have taken a non-action shot, so, don't hate on my complete lack of photography skills.  These were rushed, LOL, and my child, when presented with a camera these days, has to be either a "monster" or she has to tip her head sideways and look other places, rather than at me or the camera.  It's a tough break for me ;) 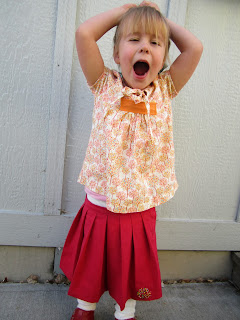 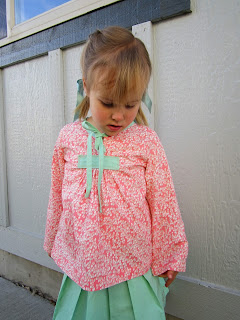 The pattern itself is lovely and easy to follow.  I do have ONE beef, which could be entirely just ME, still not sure about that:  The directions have you but the button loop on the wrong skirt piece - like, the directions and the picture don't match up.  So, I attached it to the back piece on the first skirt, the minty one, but I did it the other way on the second.  Anyway, I did silly things to make up for the button placement on the green skirt, so, ignore my tomfoolery there. 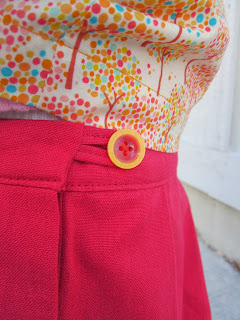 Otherwise, the pattern itself is lovely, naturally.  I will say I wish my rectangles had come out prettier, which you will notice in the photos.  My top stitching is even, but when I turned the piece/s out, I guess I was a bit lazy, though I swear I tried to make them look nice.

I did the size 4, and the skirts are definitely big on Camden, both in waist and in length - this is the first skirt that doesn't involve any sort of elastic, so, the poor girl with no bum has to keep pulling her skirt up, aha!  I think the short-sleeved version looks less sloppy on her for the reason that there is just less fabric overwhelming her little 3.5 year old body.  As I alluded to above, pleats are tricky - they were pressed out super neatly five point two seconds before I took pictures, but she sat down for a minute, and it was all over for the red skirt, aha!  The green fabric is just quilting cotton, but the red is a cross-weave or something - and neither will hold up to bum-smashings.

Lastly, I included some super fancy hand embroidery ;)  This is definitely something that slows a person down, as I also wanted to hand stitch the hem of the skirt to cover the back side of the embroidery - and because I didn't want to have a a visible line of edge stitching on the right side for this particular skirt, as I think it would detract from the overall look.  My French knots look better than they did on my first embroidery project, but the trees overall look a bit of a garbled mess, aha! 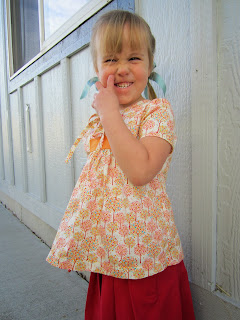 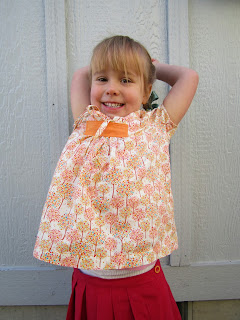 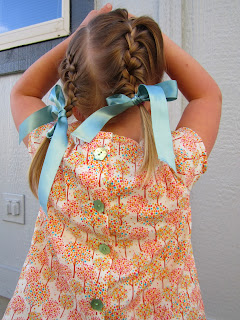 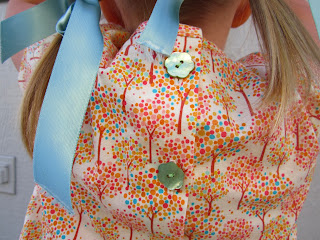 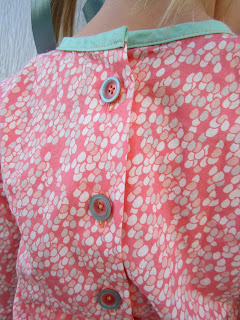 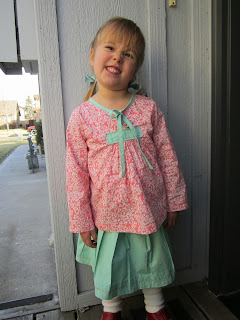 Posted by cottington at 6:14 AM