Sweet Poppy, AKA Spring in Fall

Today is a chicken stock-making kind of day, which always means chopping up and throwing into a pan eight hundred types of vegetables and herbs - preparing for a white chicken chili.  I could go on and on about its awesomeness, but that's not what this post is about (and truth be told, I haven't had it in over a DECADE, and I've never actually even MADE it myself - here's to hoping, LOL), so, I must move on.

As for today, I honestly only have "Quick!  Let's snap some shots before we rush in for our chiropractic adjustment!" kind of pictures, so, I'm not sure they do the pattern justice.  It took me about a month, as always, to knit a sweater, and this one is Elena Nodel's Sweet Poppy.  It is honestly SUCH a quick knit, for as long as those sides are.  I used Colour Adventures (also Elena Nodel) yarn in Watercolours. I do know that with this pattern, more of a semi-solid would have been a better choice, but it still came out pretty, even if those cables aren't super obvious. 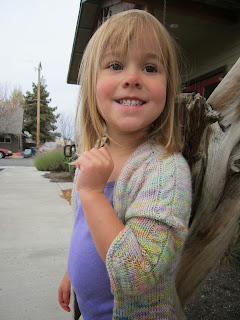 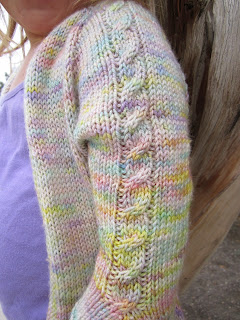 My one Greek tragedy (I just can't knit or sew without them!) during this project was getting a good way into the shoulder increases, trying to convince myself it'd be a good fit.  In the end, I had to spend part of a 3.5 hour car ride ripping the sweater out because it was too small - and then starting over on larger needles.  And who knows - the back on this version looks too wide (could be my poor blocking; who knows?).  Camden, however, LOVES it, and she keeps putting it on even just to wander about the house.  I could have gotten some super cool 80s shots of Camden today in her new Figgy's top, leggings, leg warmers and this sweater, but alas, I have to keep my cute Figgy's top a secret for a little bit longer. 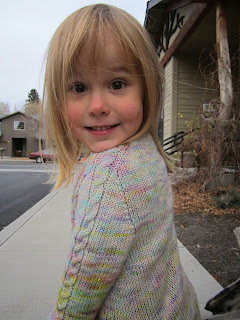 The pattern was super easy to follow, and quick, as I said (keeping in mind that I can make ANYthing slow...hence the month in making it).  I do think my armhole stitch pick-up wasn't very clean.  I didn't weave the ends as strategically as I'd hoped, but I do think getting it wet for the blocking only made it more obvious, as it's such a drapey knit. 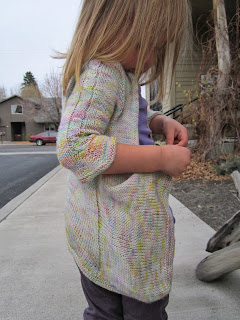 Go out and knit one of these suckers!  They're great!

Posted by cottington at 8:14 PM