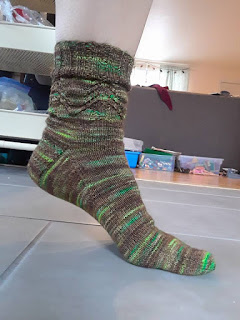 I did TRY to have my Evergreen Socks (designed by Madeline Gannon) done for the Advent-along in This Old Knit's Ravelry group....but then gift knitting got in the way!  I did some crazy December knitting that involved tight gauges and a million Barley Hats.  I don't know WHAT I was thinking, aha!  Anyway, all of this meant my socks were finished on the first of January! 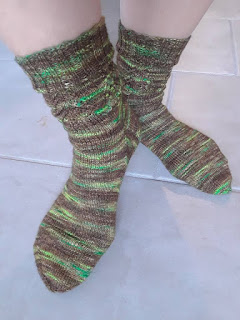 The Evergreen sock pattern was super easy and delightful.  I used Marigoldjen Yarn in the Chip colorway on the BFL Extra Long Sock base.  I LOVE that base!!  I actually DID whip through the leg portion of each sock super fast and had those complete before any of the gift-knitting began.  I am not honestly a huge fan of knitting the Eye of Partridge heel.  I think it is pretty, but I'm too lazy, generally speaking.  I did put forth the effort this time, but I'm such a weirdo in that I like to count the rows of my heel flap, rather than the slipped stitches  - in order to get my heel flaps to match, etc.  It is more work to count the rows, because you don't have one column of straight knit stitches to count. 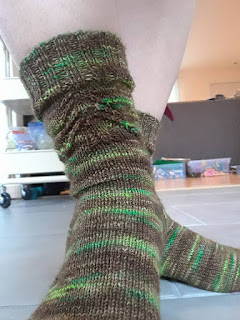 I discovered something crazy when I knit these socks, though:  I have been using a size 00 needle for sock knitting lately, because I am able to tighten my tension when I wrap the yarn around a finger.  However, apparently, that isn't tight enough for this lace pattern.  I did cast on 64 stitches, per the pattern instructions, so, maybe 60 would have been better (and I used 60 in the last pair or two I've knit).  So, after SADLY discovering this mistake, I had to rip out, from completed gusset decreases all the way through the gusset pick-up.  I picked up maybe 21 or 22 stitches (because, again, I am a LOOSE knitter, but when I have to move down so far in needle sizes, my ROW gauge tightens up like nobody's business), which is more than most people would do, I believe.  I tried to not be too sad, though, LOL, and I finished the first sock up pretty fast.  I did knit the toe three times, though, because I was making an effort to knit a toe that was more specific to my foot.  I decreased quicker on the left side of the left foot and sort of did some nonsense on the other side.  I then did the same thing...almost...with the right sock, and as always, with the right sock, I added four stitches, to accommodate for my bunion. 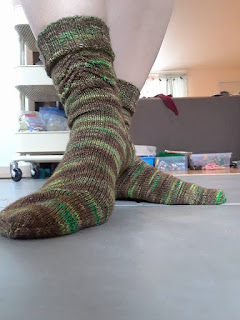 So, they're cute, and they fit pretty well!!

As for my gift knitting, I knit a total of six Barley hats, using all scraps from my stash.  I also knit two pairs of Stars and Stripes mittens.  In the end, it was a bunch of dense knitting, which really pains my upper right back, especially.  Ah, well.  They are done and cute!  I do NOT have a photo of the mittens, but I'm hoping my sister comes through with a photo!  As for the hats, I don't have a photo of a green version, but the others are pictured below.  I also have a duplicate of the pink, which is Dashing Dachs Stallion Organic Merino yarn I was given years ago, here at home to give Camden's Seattle cousin.  I am also working on a seventh Barley hat and a pair of baby mittens connected with an i-cord, aha!  SOOOO much knitting!  I love, though, that it uses up remnants/scraps/whatever, and I get to see tiny things all over again! 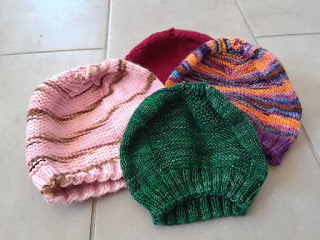 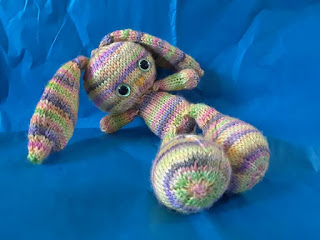 As for our fun holidays, the kids had fun, I think, and we did the usual exchanging of letters with Santa, which is always a good time.  The fairies had it out for him again this year, but they reached a silent agreement one evening, just so Santa could deliver gifts before we headed up to visit Matt's parents for Christmas.  We also saw a fun tap-dancing musical version of Cinderella, at the Northwest Children's Theater.  I love our little tradition of seeing a show the day after Christmas!  Matt also worked hard on finishing up projects around the house....we now have baseboard trim and a fully framed and trimmed window in our room, but there is a LOT of painting ahead of me....yikes. 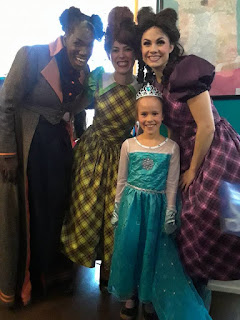 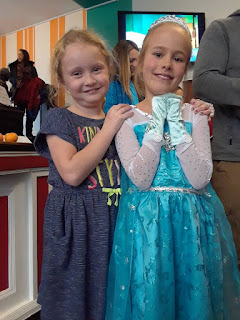 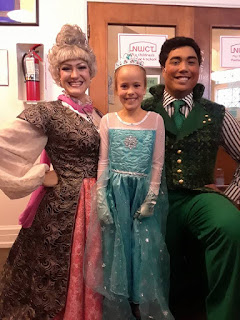 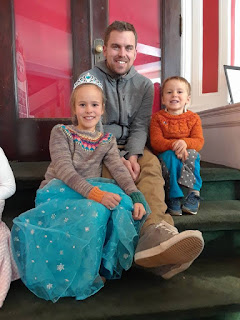 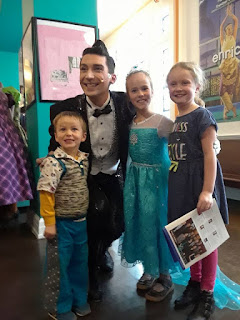 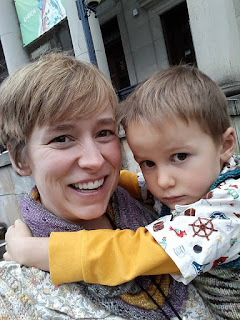 As for the new year, I get to see a concert this month, and we will still be working on house projects!  I hope to fit in more reading.  I just re-read the Hunger Games trilogy, but I need to be better about reading NEW books way more often.  I used to be such a reader, but I can only do so many things at once, and knitting usually wins ;) 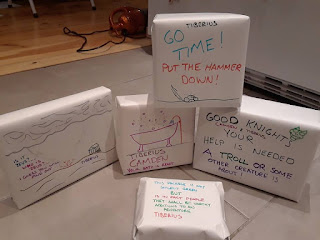 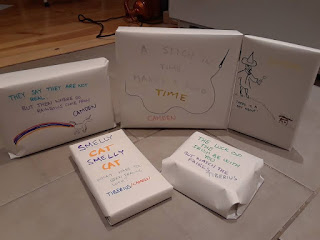 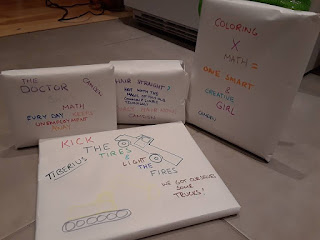 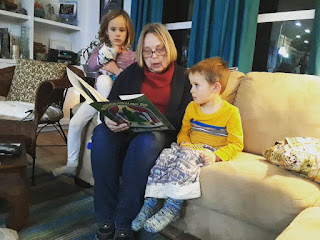 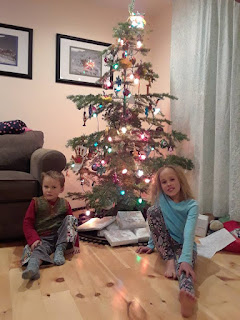 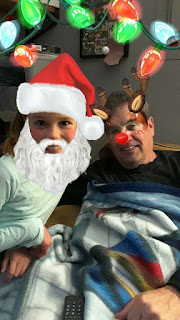 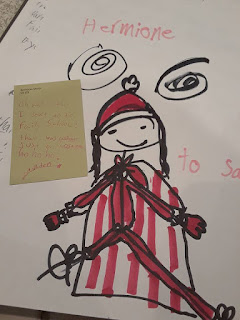 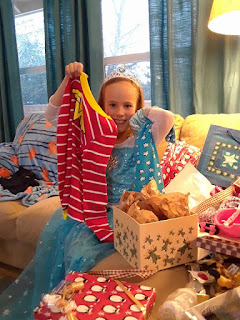 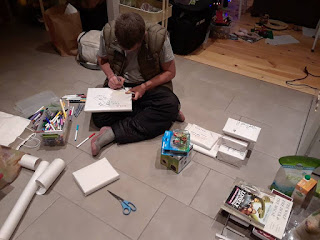 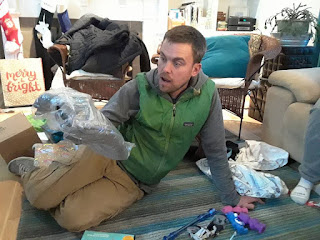 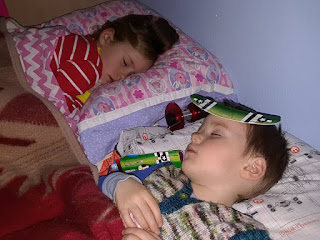 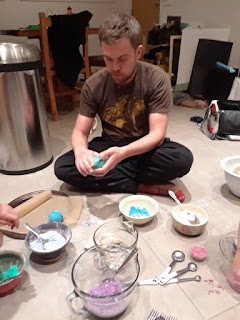 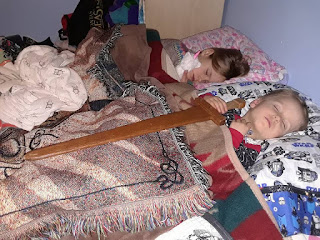 Posted by cottington at 4:25 PM