A Complete Re-Knit: The Antler Sweater 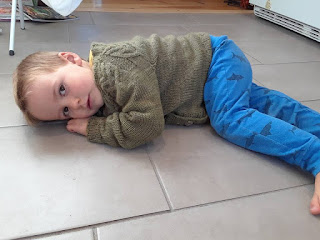 Man.
I knit the Antler sweater by Tin Can Knits the first time back in the late winter, already feeling behind, knowing the poor kid needed a new cardigan.  As it was, I'd already taken what felt like FOREVER knitting his Christmas in July, a pull-over.  The goal is to try and have one cardigan and one pull-over knit for Tiberius each year.  Tiberius is young, and I'd already failed him, as I had to rip out the entire sweater, buttons and all.  It was tooooo small.  I knit the size correct for his age, but I had pretended to myself that it'd block out, knowing full well that non-superwash yarn doesn't really BLOCK OUT. 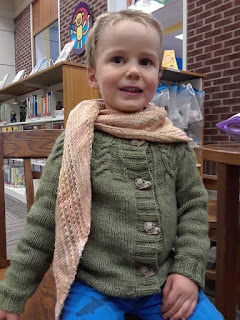 That was a sad day.  I definitely needed a break, especially after that pull-over fiasco.  So, I told myself I'd get back to it this fall.  I started the last day of August, so says Ravelry, and I finished September 28, because though I was knitting the size 2/4 and sizing up on needles, it was STILL going to be too small.  So, new plan:  I cast on for the size 6/8, and I knit the length to somewhere between the size 2/4 and 4/6...which seems NUTS.  But I definitely didn't want to go up another needle size, as my fabric was fine as is. 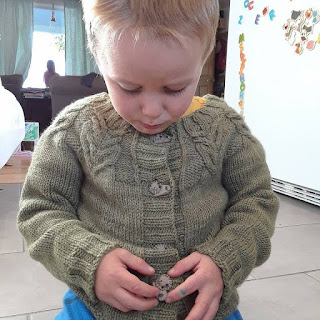 As for the fit:  I definitely am not a huge fan.  I'm sure part of it is the 6/8 sizing in the yoke, but it's definitely larger around up there, and the buttons still pull.  And as for the button bands themselves, I'm a fan when the collar is added AFTER the bands, as I think it's more aesthetically pleasing to have the collar topping the bands, rather than the bands sidling up to the collar, if that makes sense.  If I'd thought about that, I could have done it, but I clearly hadn't. 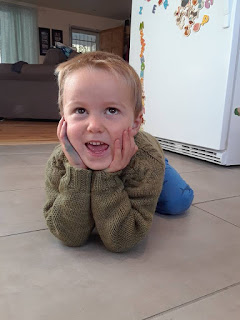 I'd even gone to great lengths to purchase some more Swans Island Natural Colors Merino Worsted in Tarragon from someone on Ravelry, and I'm pretty sure I didn't even need the extra skein...but I'd been so worried!  I honestly should whip Tiberius up a hat to go along with this sweater.  The yarn is great, and I'd totally use this line again.  I love the color, and in the photos, it comes out truest in the outdoor shots. 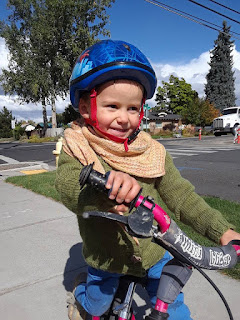 While it's cute and while the pattern is well-written, I don't know that I'd knit it again.  I liked the Northshore patterns I knit up for both Camden and Tiberius, but knitting another cardigan has me nervous, LOL. 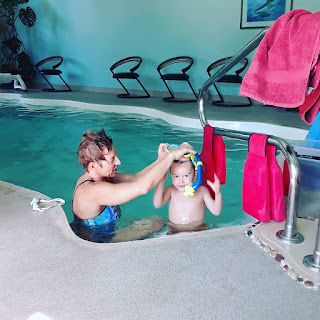 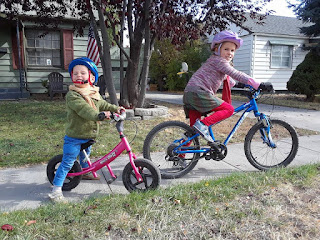 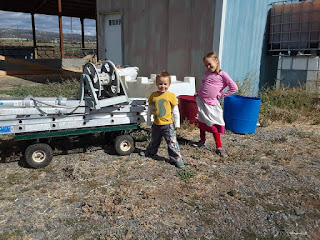