Ahhhh...'tis a gorgeous day outside!  Yesterday was gorgeous, too, and I guess we're headed into a lovely week of sunny skies, which is awesome - yet I find I don't get to enjoy those skies AS much with a wee one.  We attempted outdoor time twice yesterday, after my daughter's birthday party, but this wee boy wasn't having it....and in the photo below, he wasn't having the SUPERFAST photo shoot from today (his poor big sister needed a little attention, eh???).


So, as with a few Oliver and S patterns, this wasn't my first go-round with the Tea Party Sundress.  Camden happens to super love this pattern, and I believe this is my third version.  If there is another, I can't at all recall it! 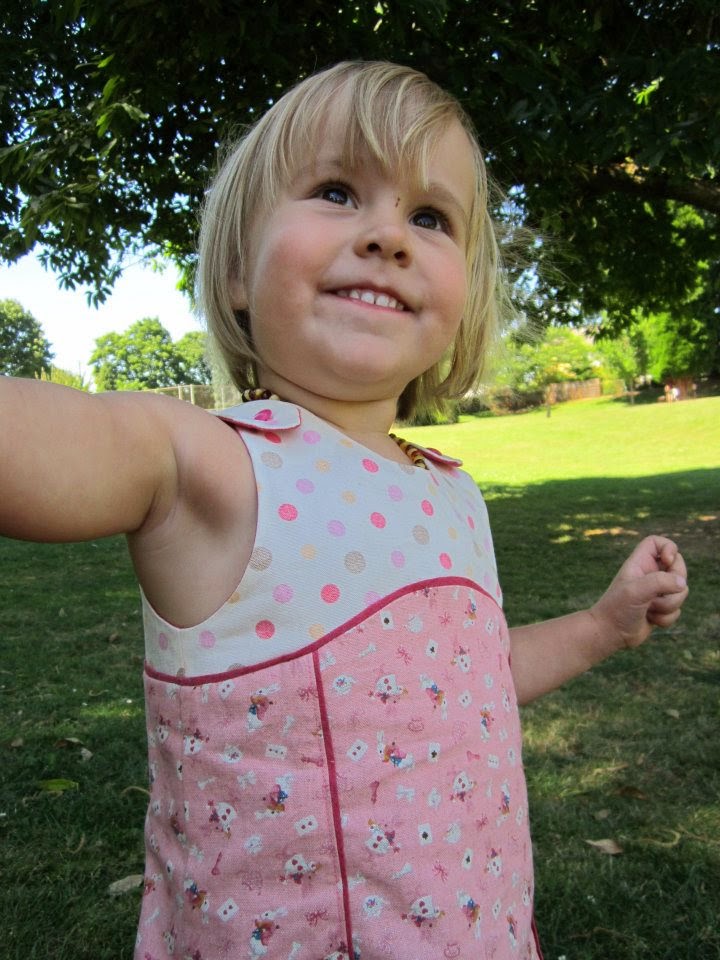 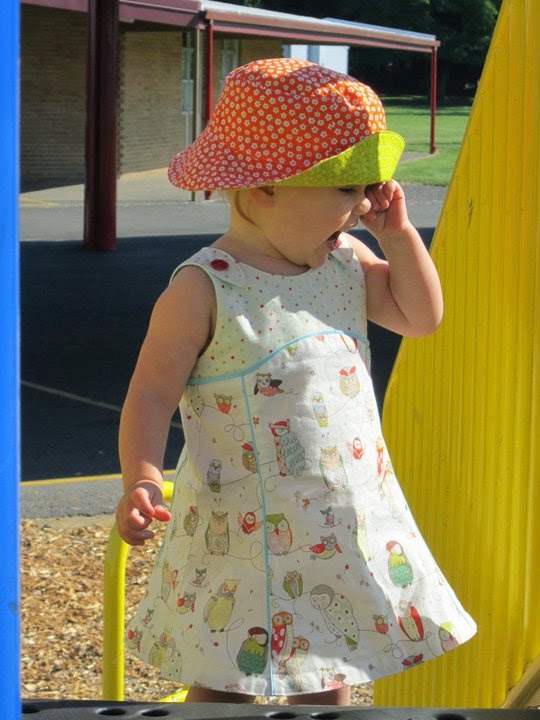 I did try to jazz this one up with applique, which I haven't done in MANY moons - and which I've only done once or twice, anyway.  (This is to say you shouldn't look toooo closely, aha!) 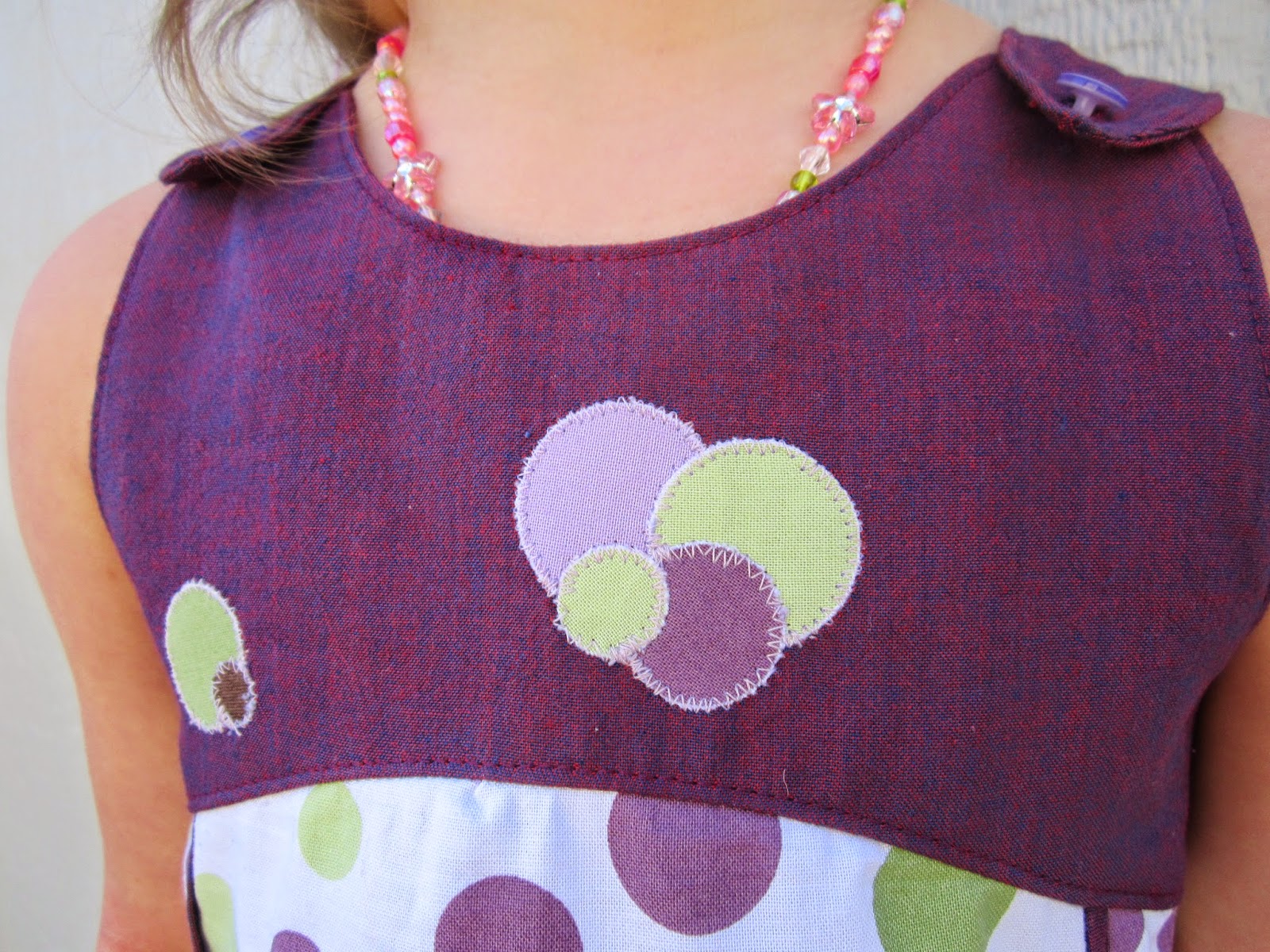 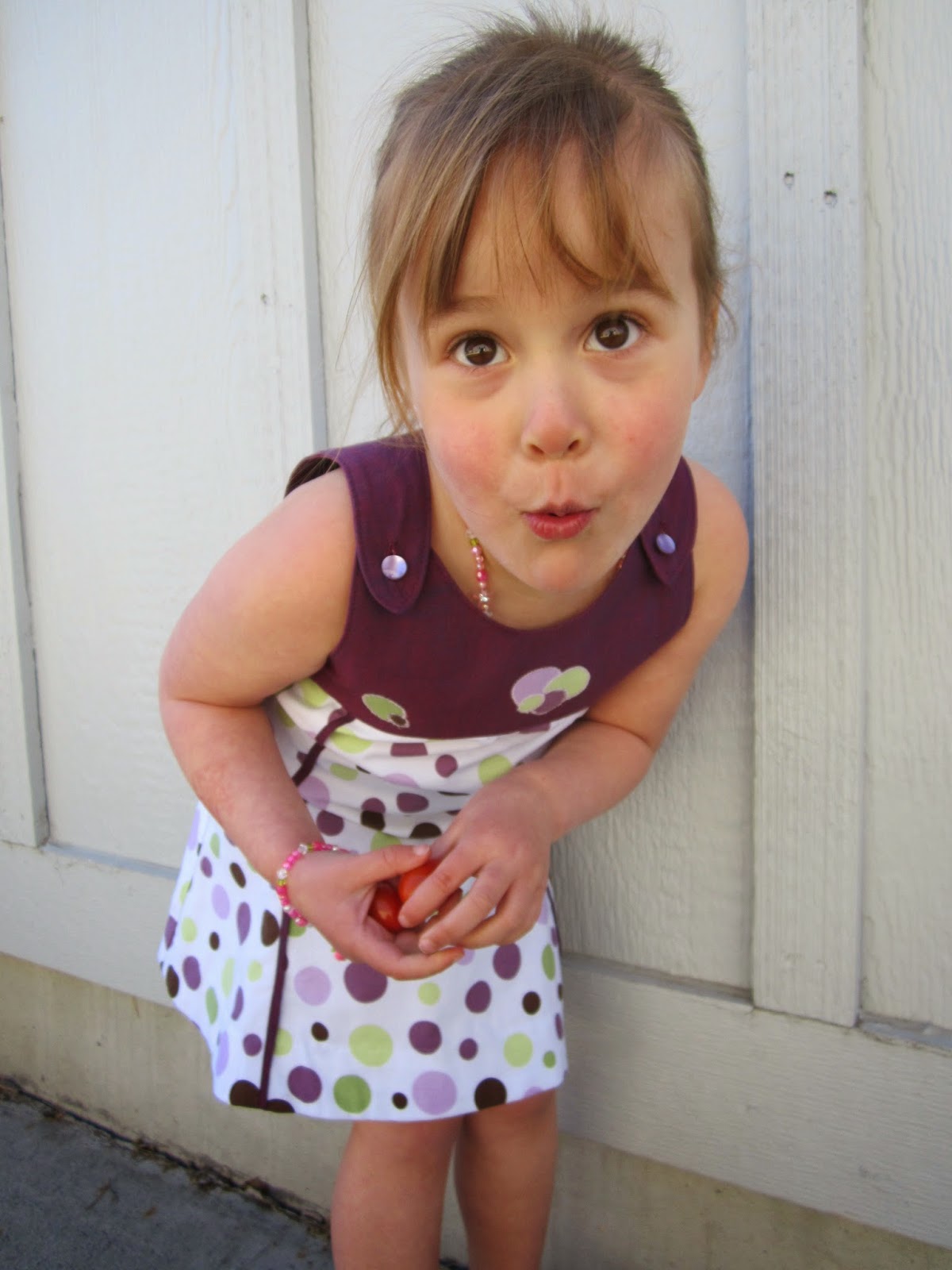 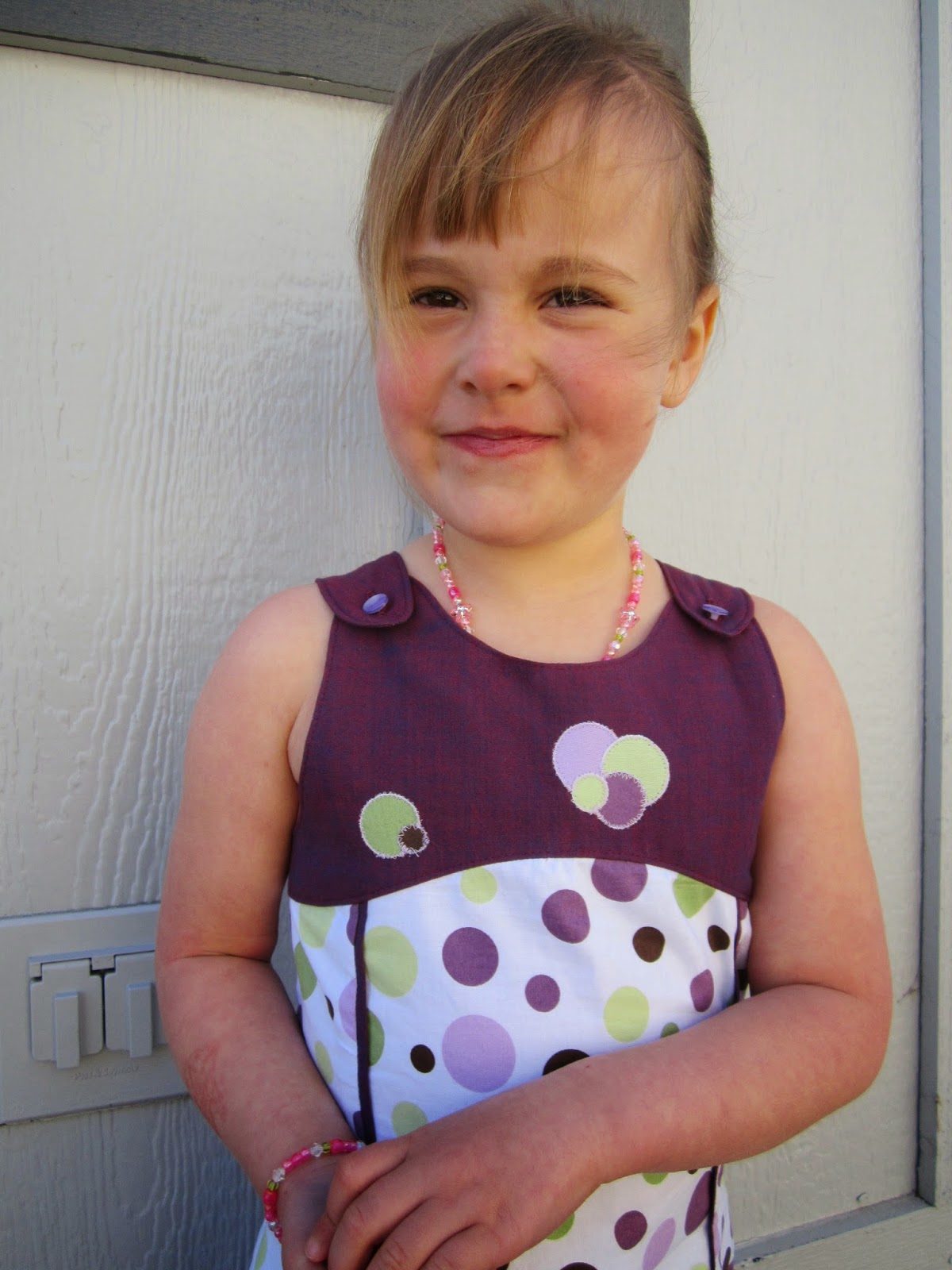 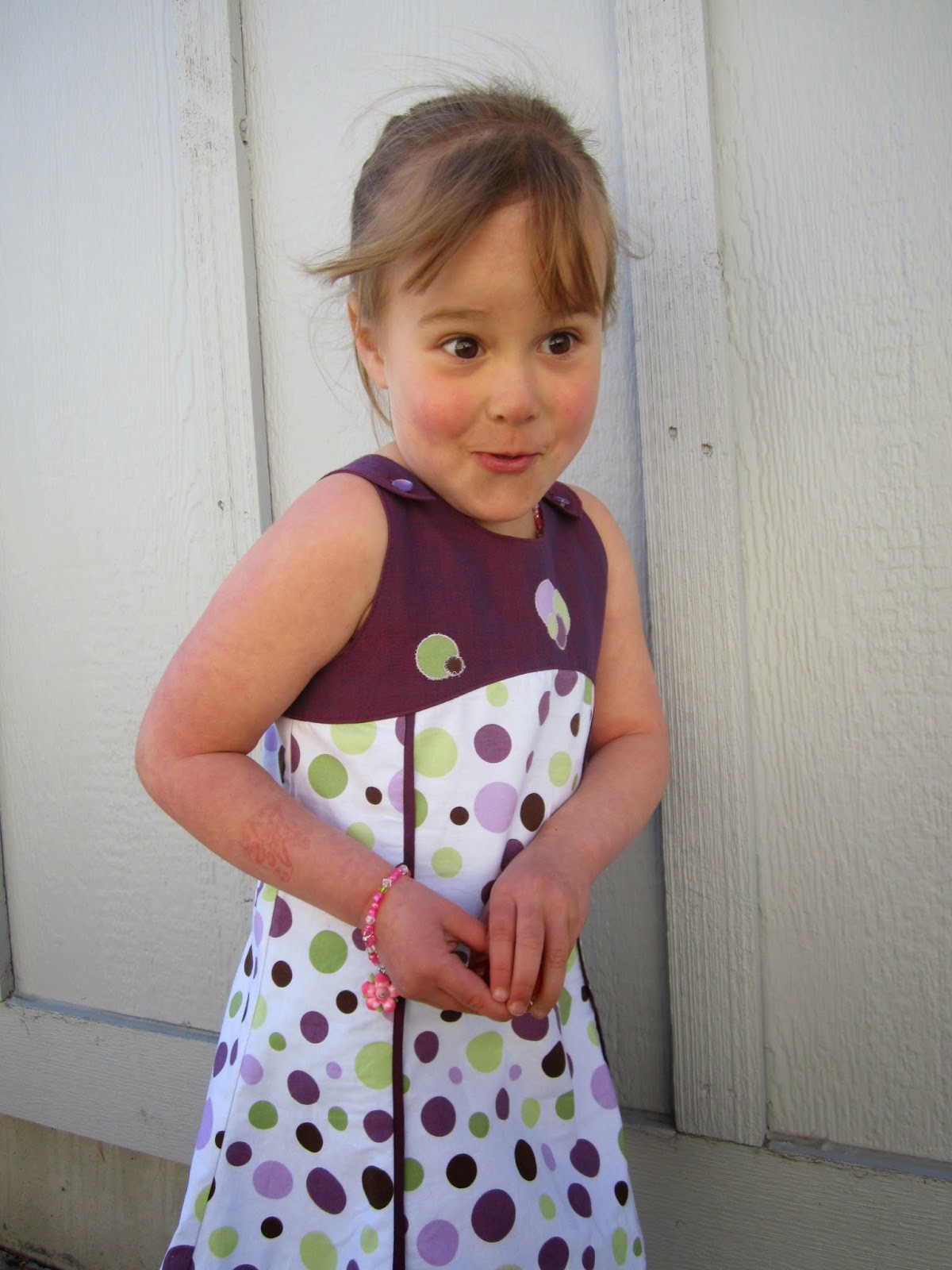 I love me some shot cotton, as many people know, as it has a depth, albeit a thinness (stick that size 70 needle in yo' machines!), that quilting cotton does NOT have.  I used it for the bodice and for the flat piping, which may be a smidge wide, but eh - who cares???  And as with the last pattern I blogged about, this one was sewn in the same few days before Tiberius was born....I haven't been able to sew since; he's a hostile baby and only likes his mom :O  Tough times, people, tough times.  But I digress....

This pattern is honestly a pretty quick sew!  I like to quickly get the flat piping attached with a long stitch, sew together all those skirt pieces, then do up the bodice.  It does mention in the pattern that attaching the bodice to the skirt portion may be tricky, because of the curve, but I didn't find it an issue this time...and if it was an issue the first and/or second time, it could be because I used flat piping there, also.  I opted not to this time. 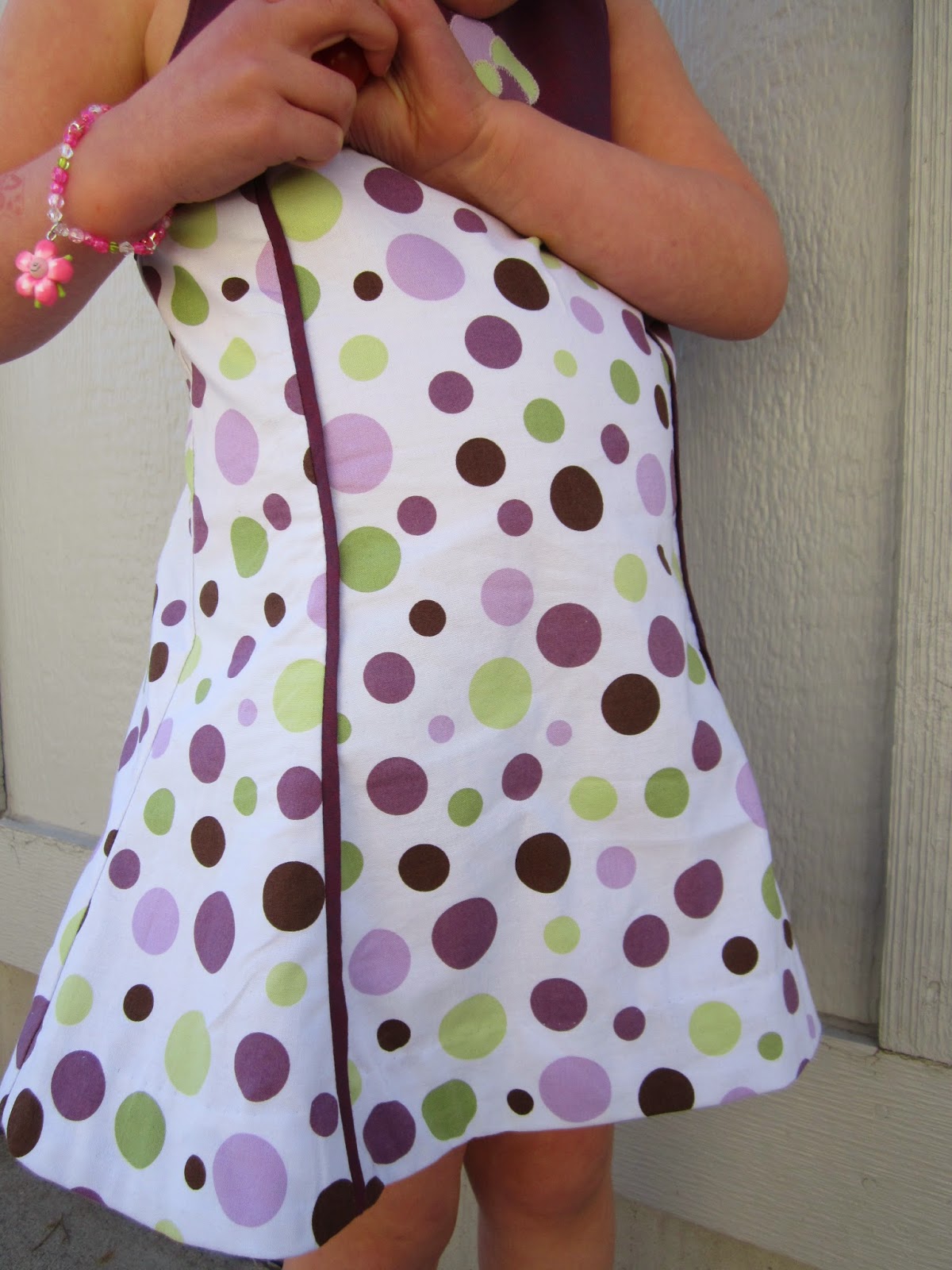 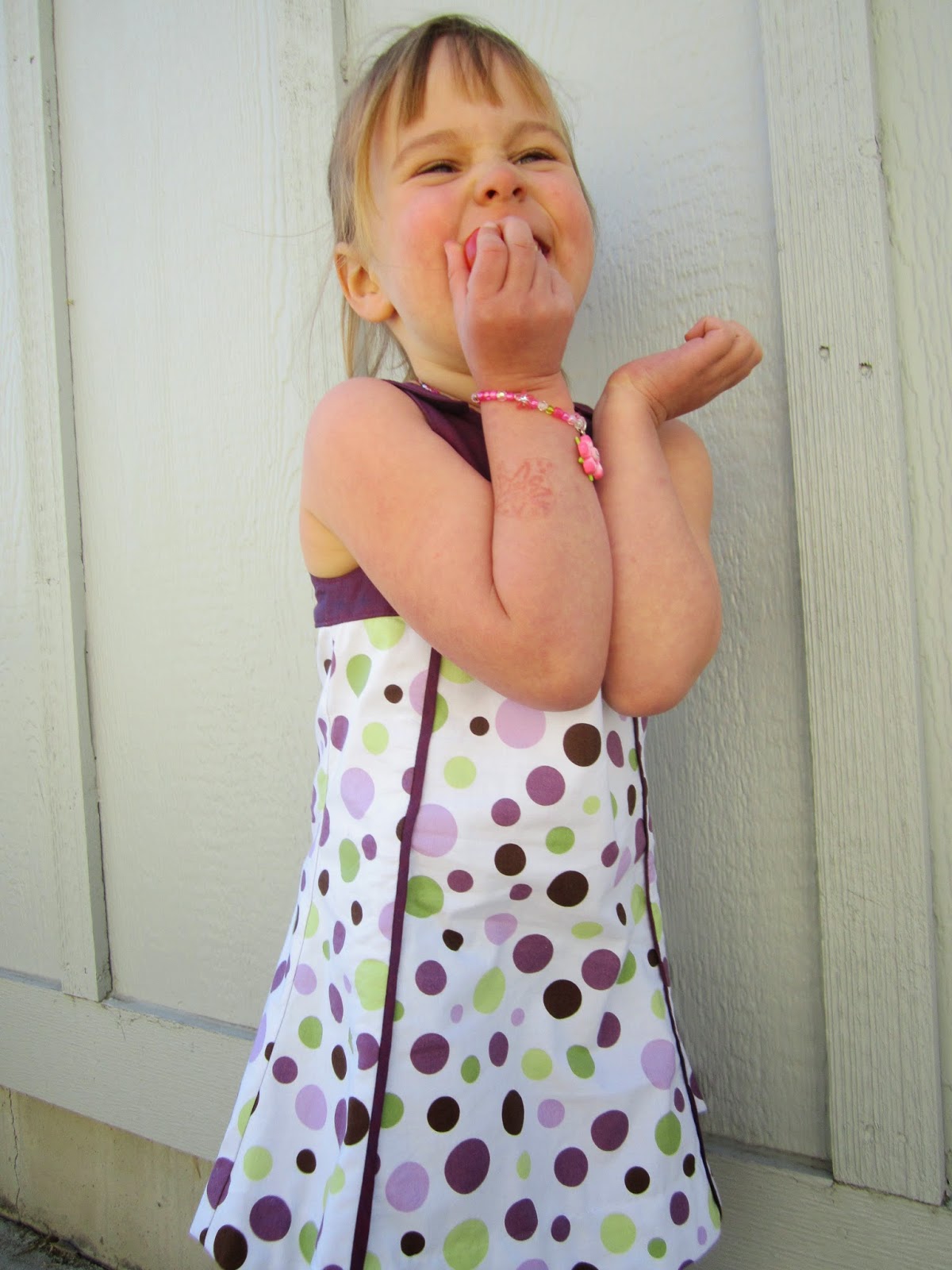 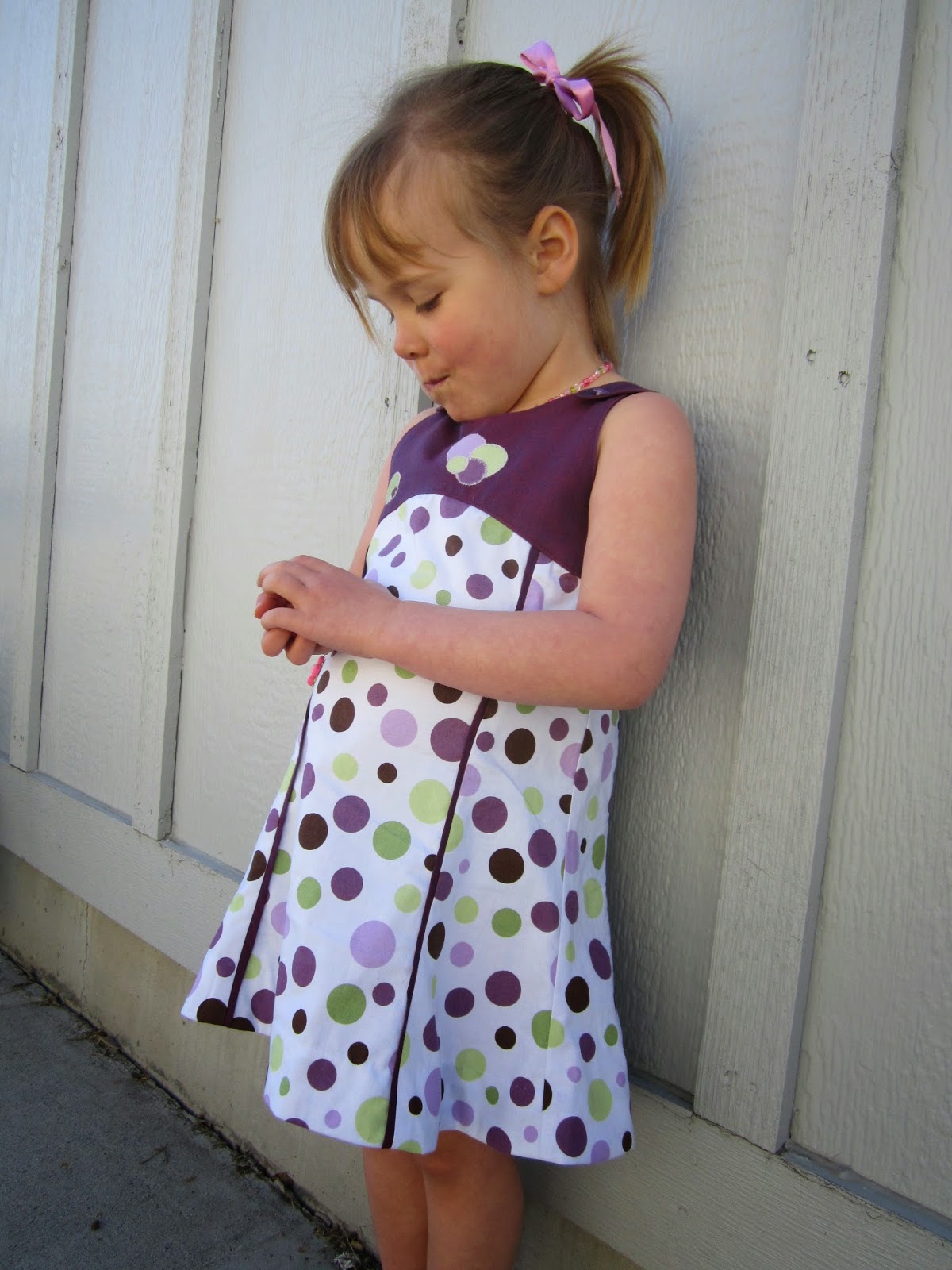 I will say that even though I believe I lengthened this one, I wish I had lengthened it more - both in bodice and in skirt, but whatevs.  It'll work for now, and it's super fun and summery!  I hear Summer doesn't start in Bend until July, but hey - again....NICE outside today!

Camden wanted to include tomatoes in this photo shoot - and hey, if she chooses to eat anything healthy, I'm allll for it! 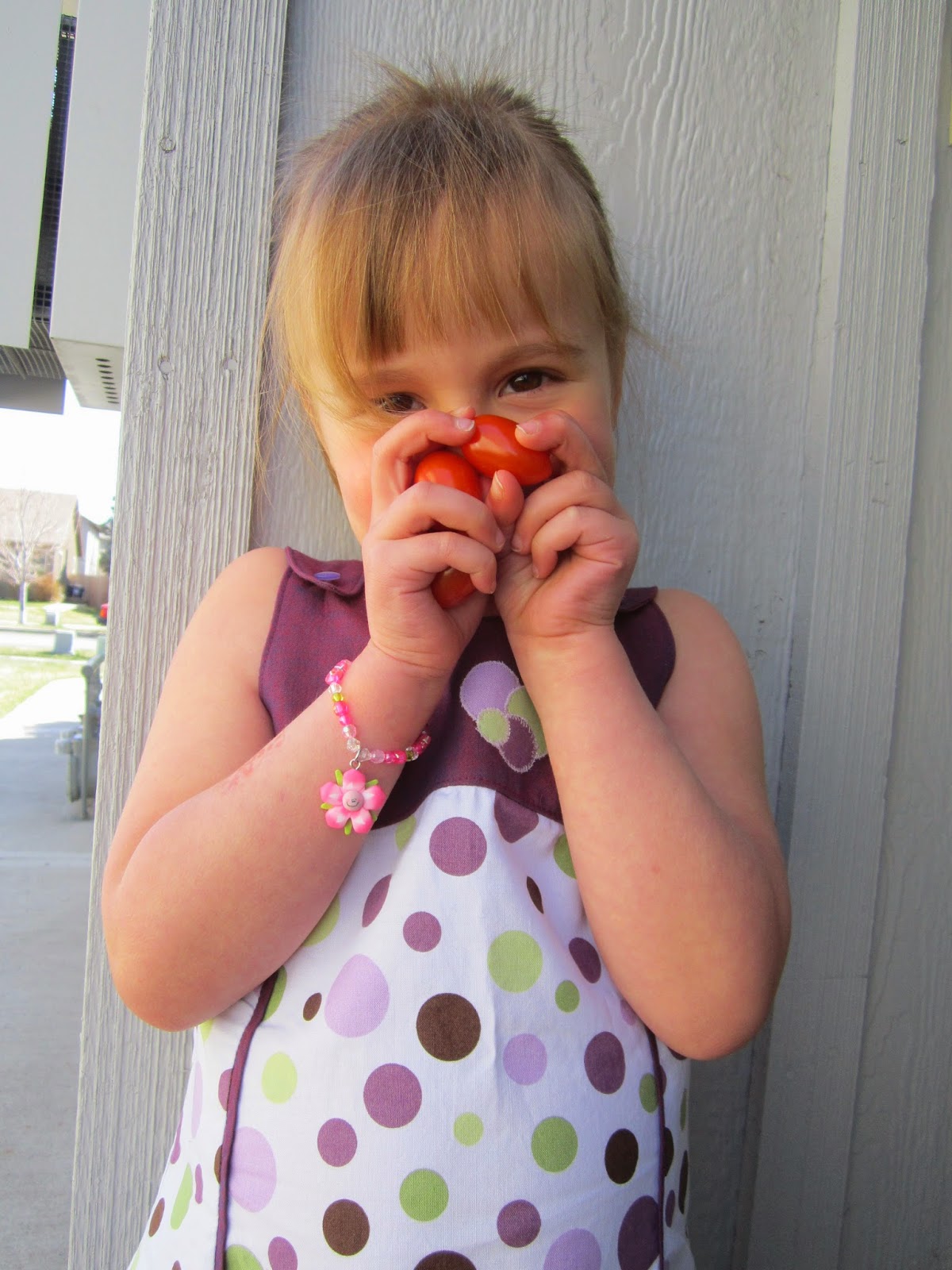 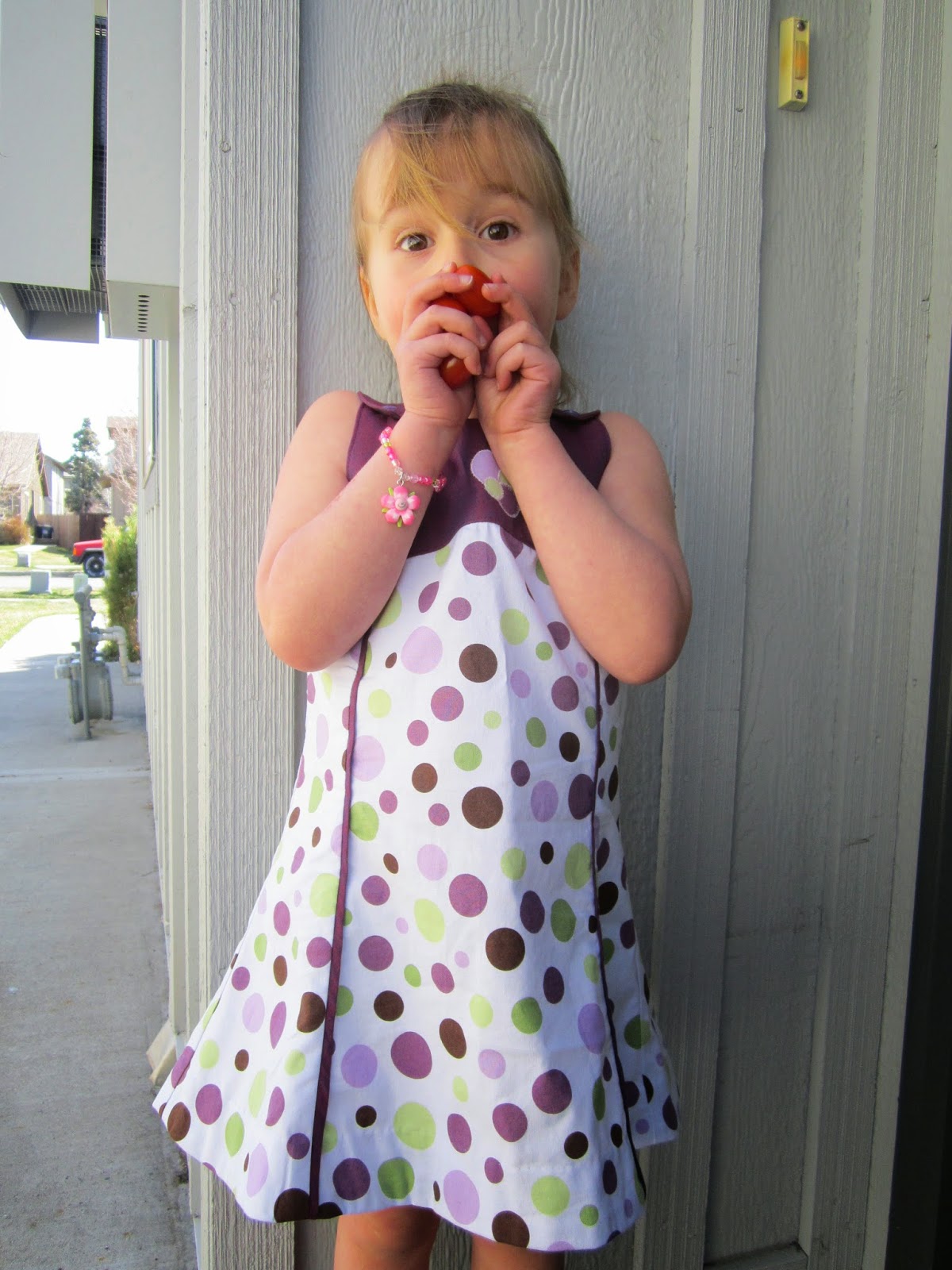 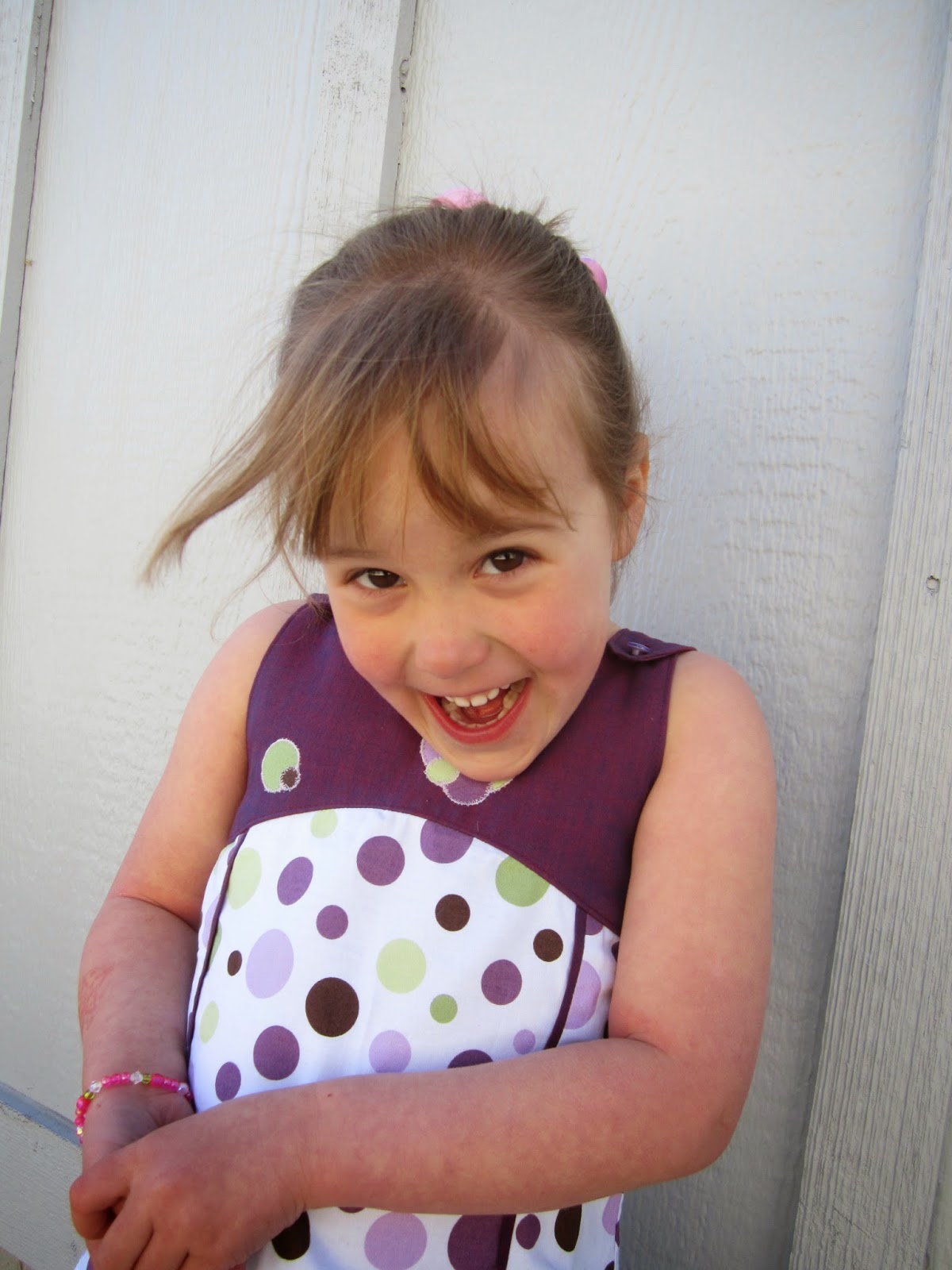 Posted by cottington at 5:10 PM