The moment I saw this pattern, I knew I HAD to knit it!  And every time I put this sweater on Tiberius, I melt a little inside - I love it that much!

Presenting the Anders sweater, designed by Sorren Kerr, sported by both Joshua, the son of Nina, a wonderful mom/knitter on Ravelry - and Tiberius!  I will preface this post by saying that Nina must be a magical photographic genius, because it took ME three photo shoots to get the blurry pictures you see below, and she was able to get some loveliness in ONE try, aha!  Tiberius won't sit still for anything.... 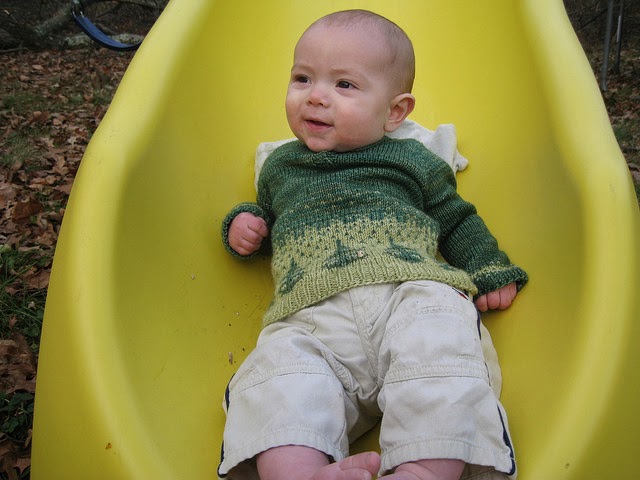 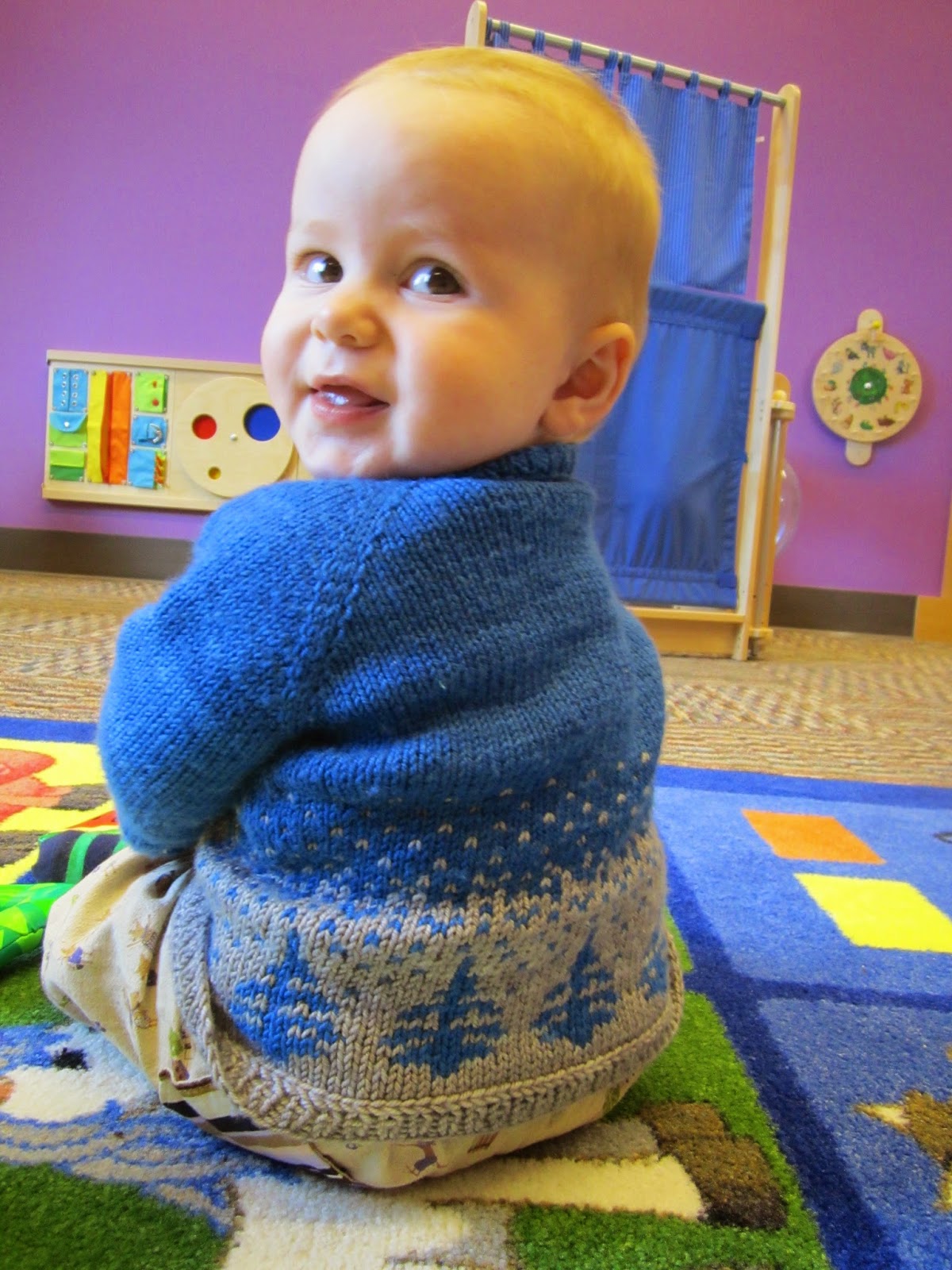 As you are probably noting, Tiberius is HIDING a little bit inside that sweater, but that's all right; we'll get a few month's use out of it this way...as he's sadly already too big for his Sunnyside - though I could probably happily still squeeze him into it. 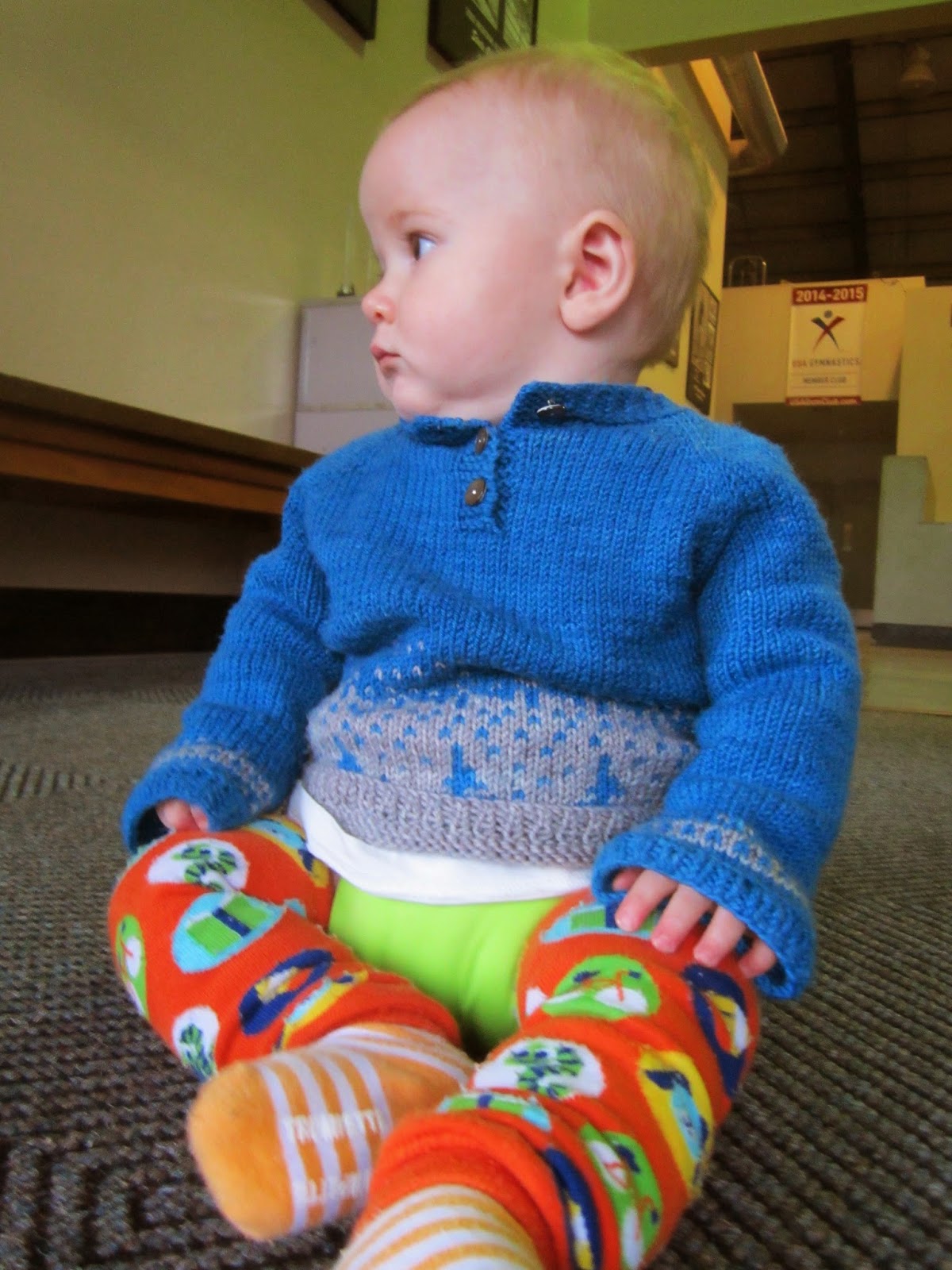 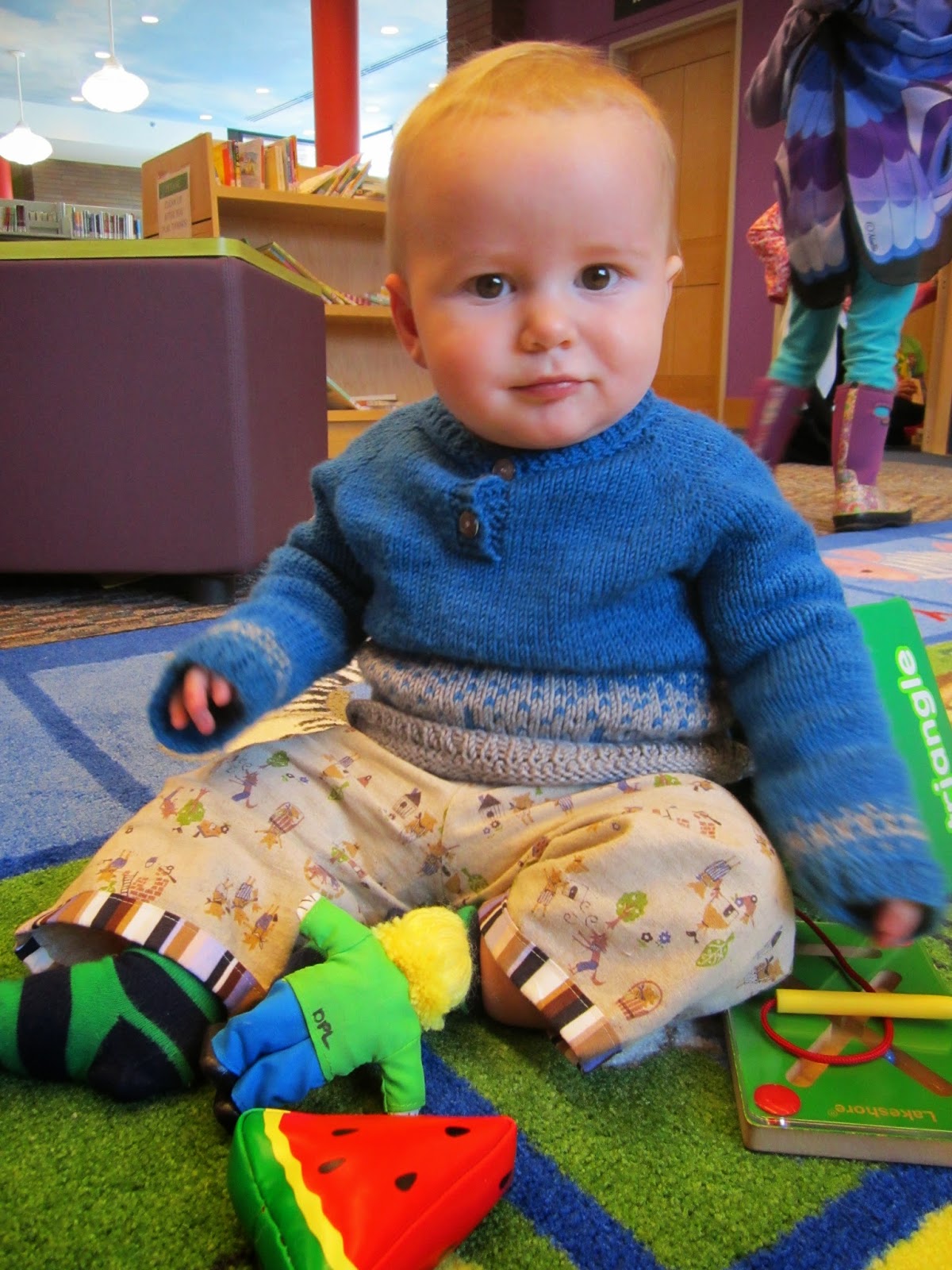 The pattern itself was super easy - it's a basic construction, top-down, which I like.  I did NOT change my needle size in the colorwork as soon as I maybe should have.  I was testing out whether or not I really DO tighten up in colorwork, as I'm such a crazy loose knitter.  I DID tighten up a wee bit, which is why I finally changed needles, though I did not do that on the sleeves (and I don't think it calls for you to do that, anyway, on the sleeves...it'd be silly).
This was my first time using Miss Babs, and I used the Yummy 3-ply sport weight yarn in the Indigo Bunting and Oyster colorways.  I enjoyed the yarn, and as with Tiberius's first two sweaters, this one is pilling up a bit, just because he's still a roly-poly baby....though he IS crawling now!!  OMG. 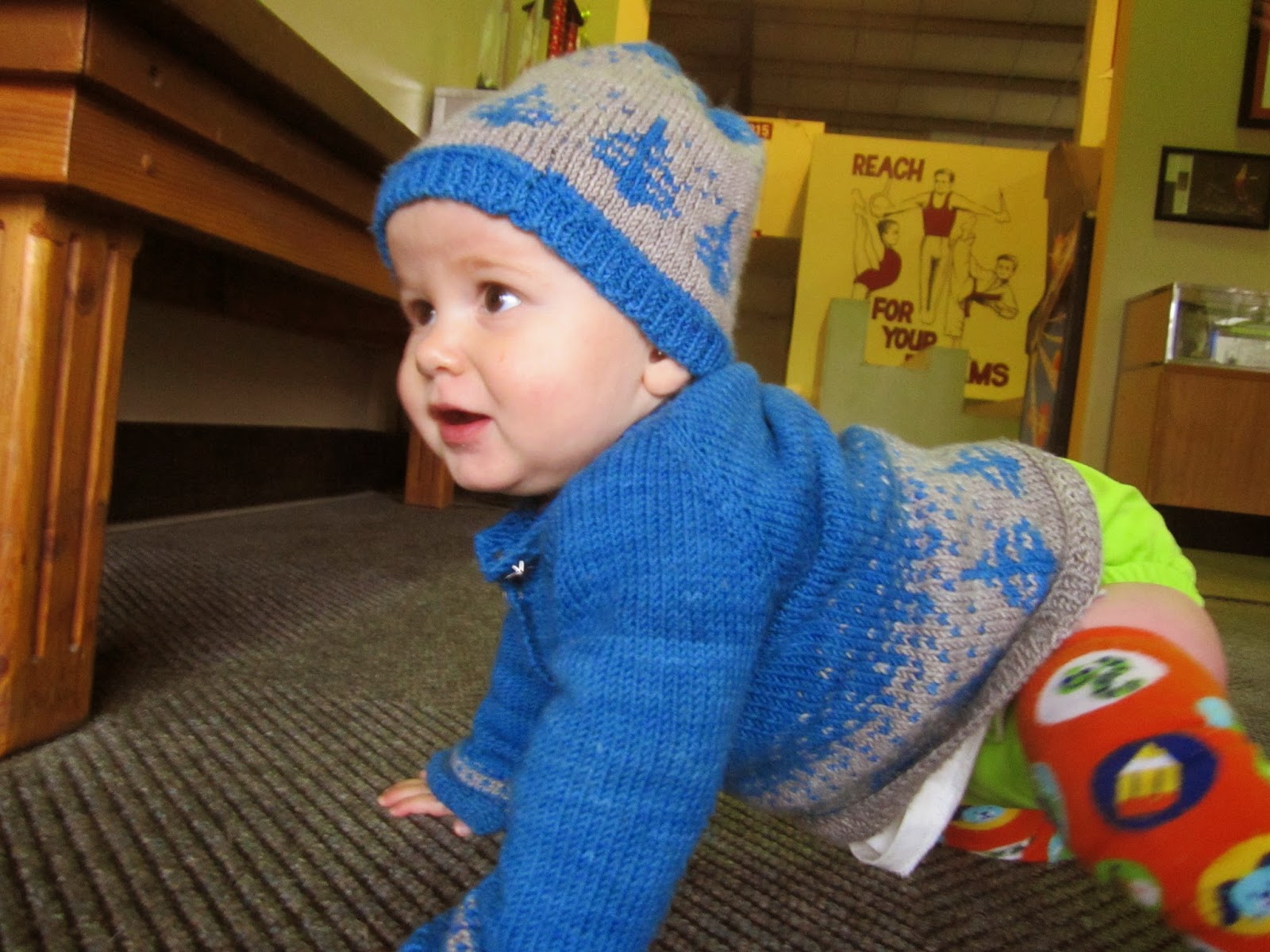 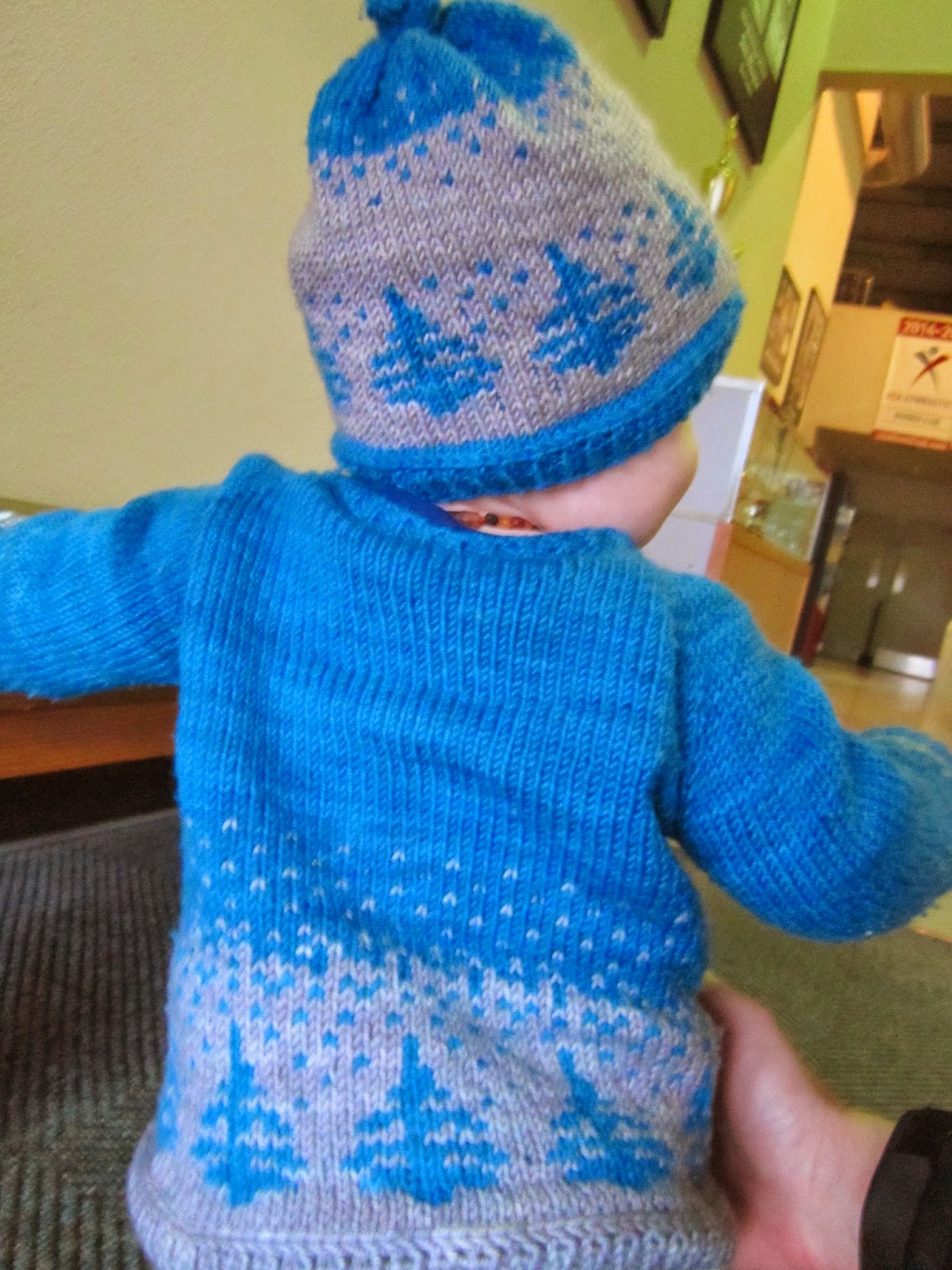 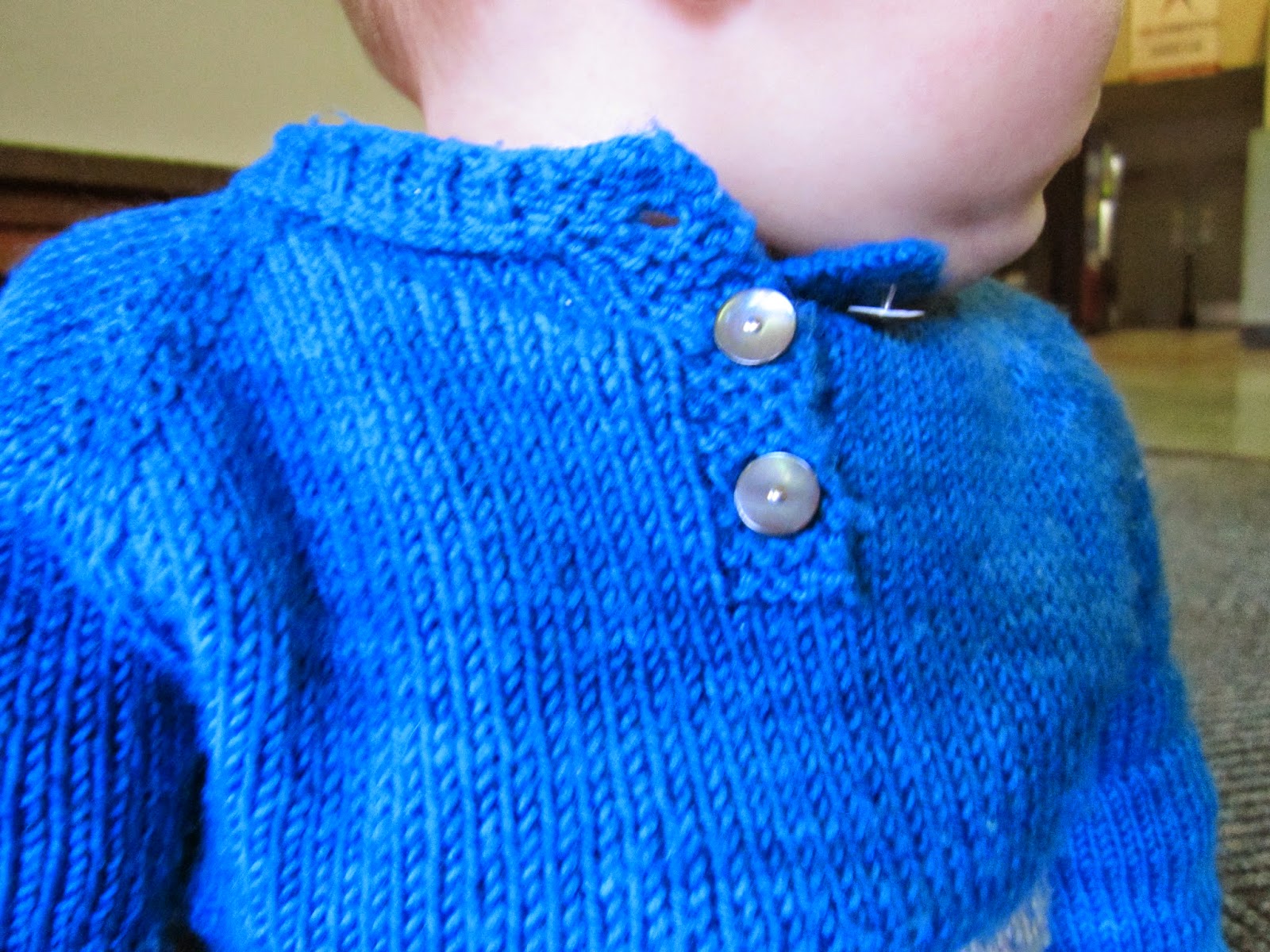 Nina used Malabrigo Arroyo in Fresco y Seco (the darker green) and Miss Babs Yummy 3-ply sport in Frog Belly - I love how hers turned out and still wish I'd done a green version, aha!

My ONE issue with the pattern is that I should NOT have run out of yarn.  I initially bought 240 yards, as the pattern page said 225 yards for size 6-12 months.  When I purchased the pattern, though, it said 255 yards :O  I wrote Sorren, and she messaged back, of course, that the 255 was more correct.  I figured as long as I was on gauge, I was safe, even though I had 15 fewer yards.  Turns out that was NOT the case.  I'm not sure how closely many pattern designers normally cut it, but 15 yards seems close, and I think the yardage requirement should be higher on this pattern for the main color.  There were some freak-out moments about finding more yarn....thankfully, a Ravelry user came to my rescue.
For the matching hat, I used the stitch count and decreasing/finishing method of this Simple Striped Baby Hat pattern - and just incorporated the tree chart from the sweater.  It mostly worked out well, though my "tie" at the top wasn't quite long enough, so, it was tricky to actually TIE.  Secondly, I did make the hat too long - ooops.  I wish it was an inch shorter.  I was mostly focusing on trying to get the change from colors to look neat, rather than thinking about hat height.  So, it's clearly large. 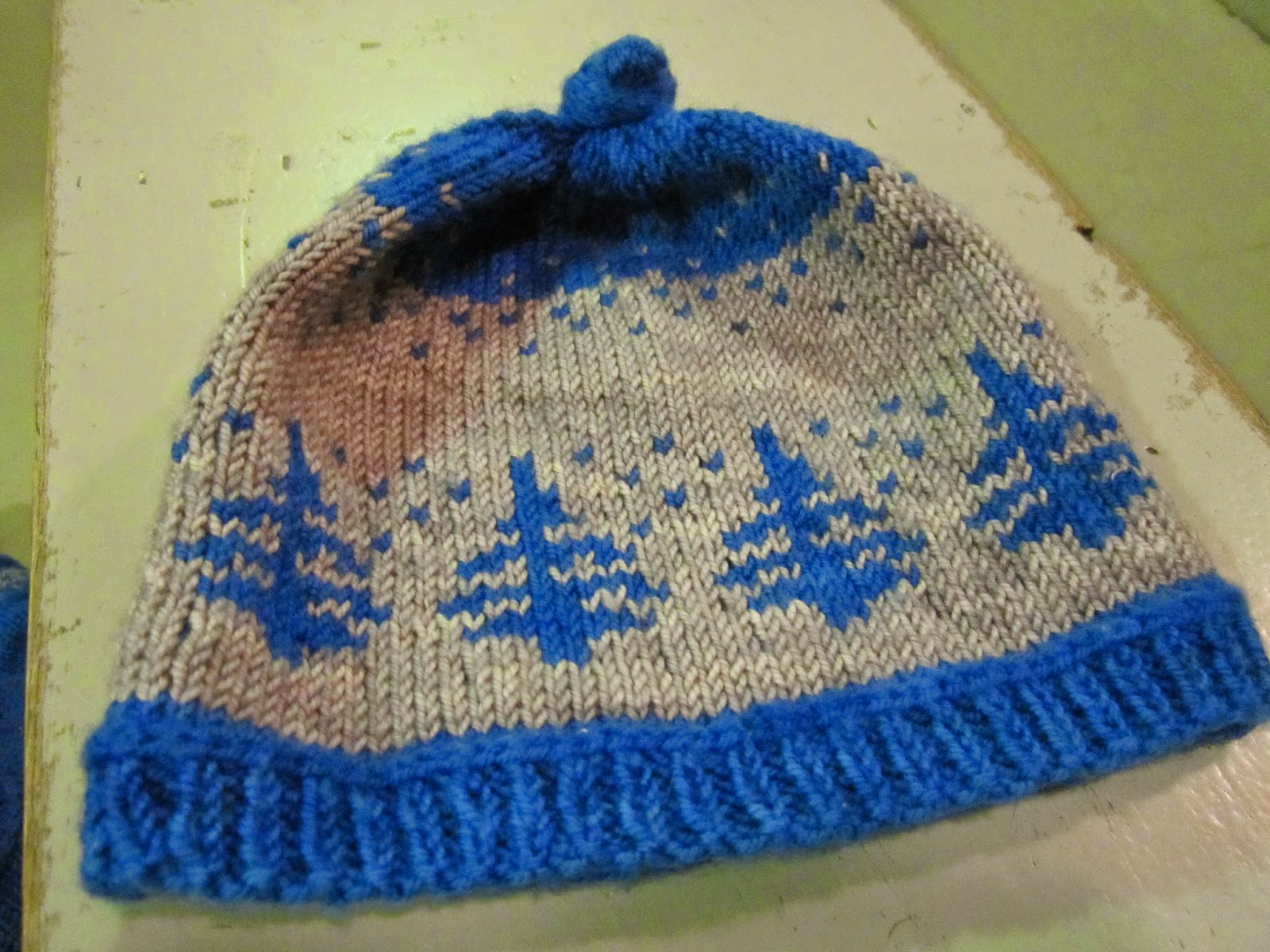 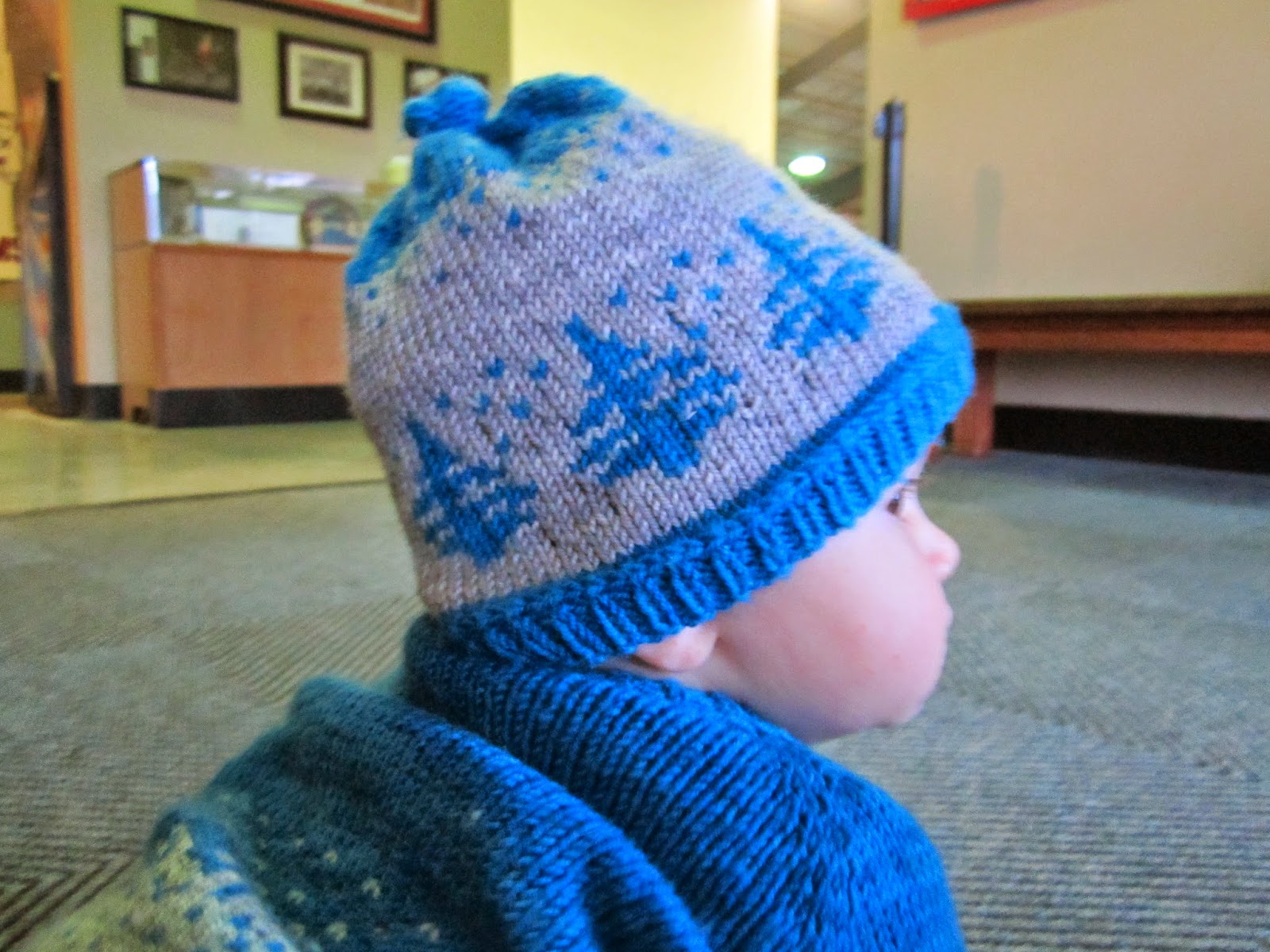 Clearly, this is a super cute sweater on little boys, and I think Nina and I both vote that you head out and knit an Anders today! 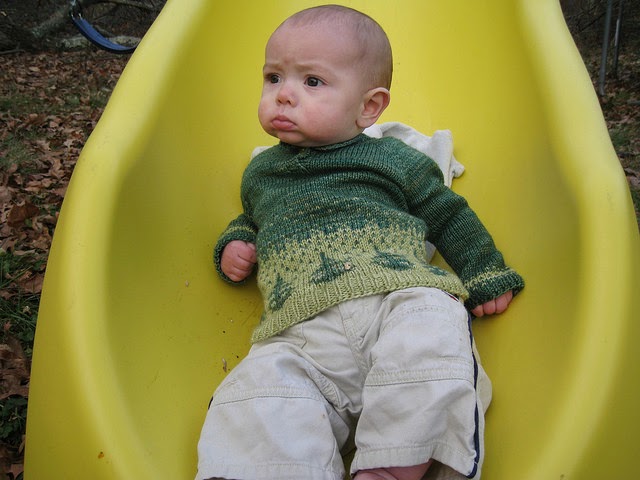 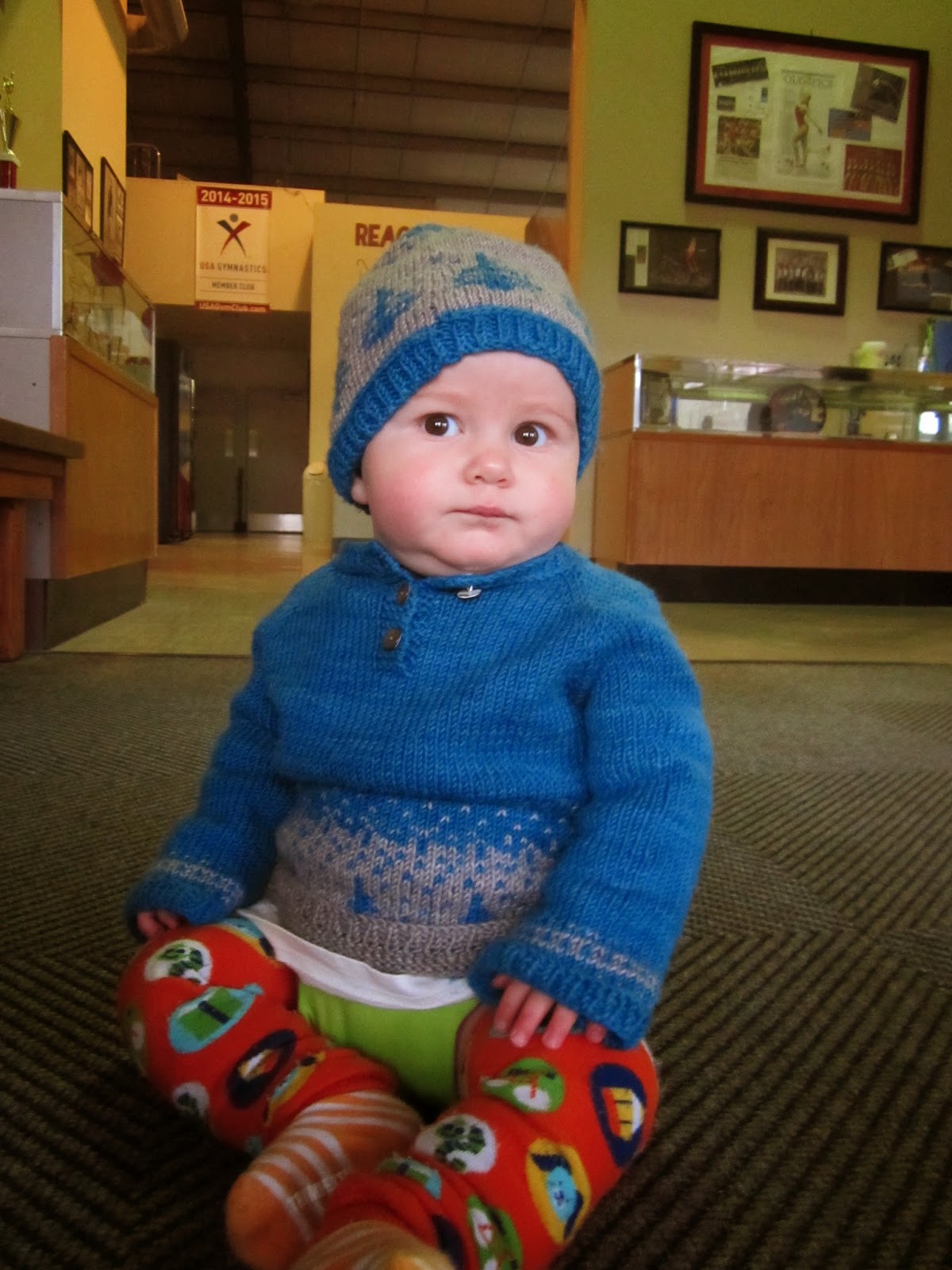 Posted by cottington at 5:42 PM