A Year in the Making! The Sunday Brunch and Puppet Show Tunic 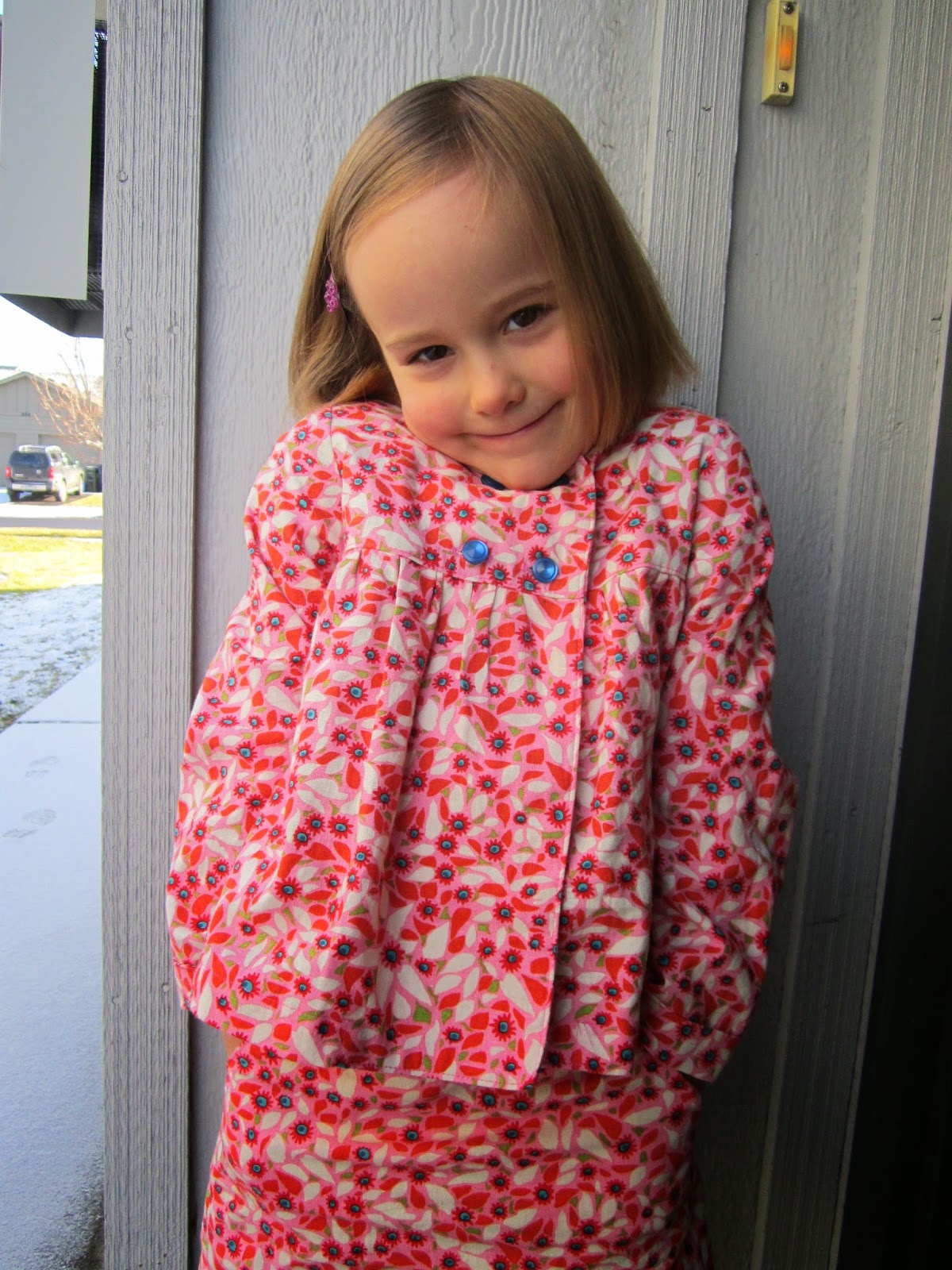 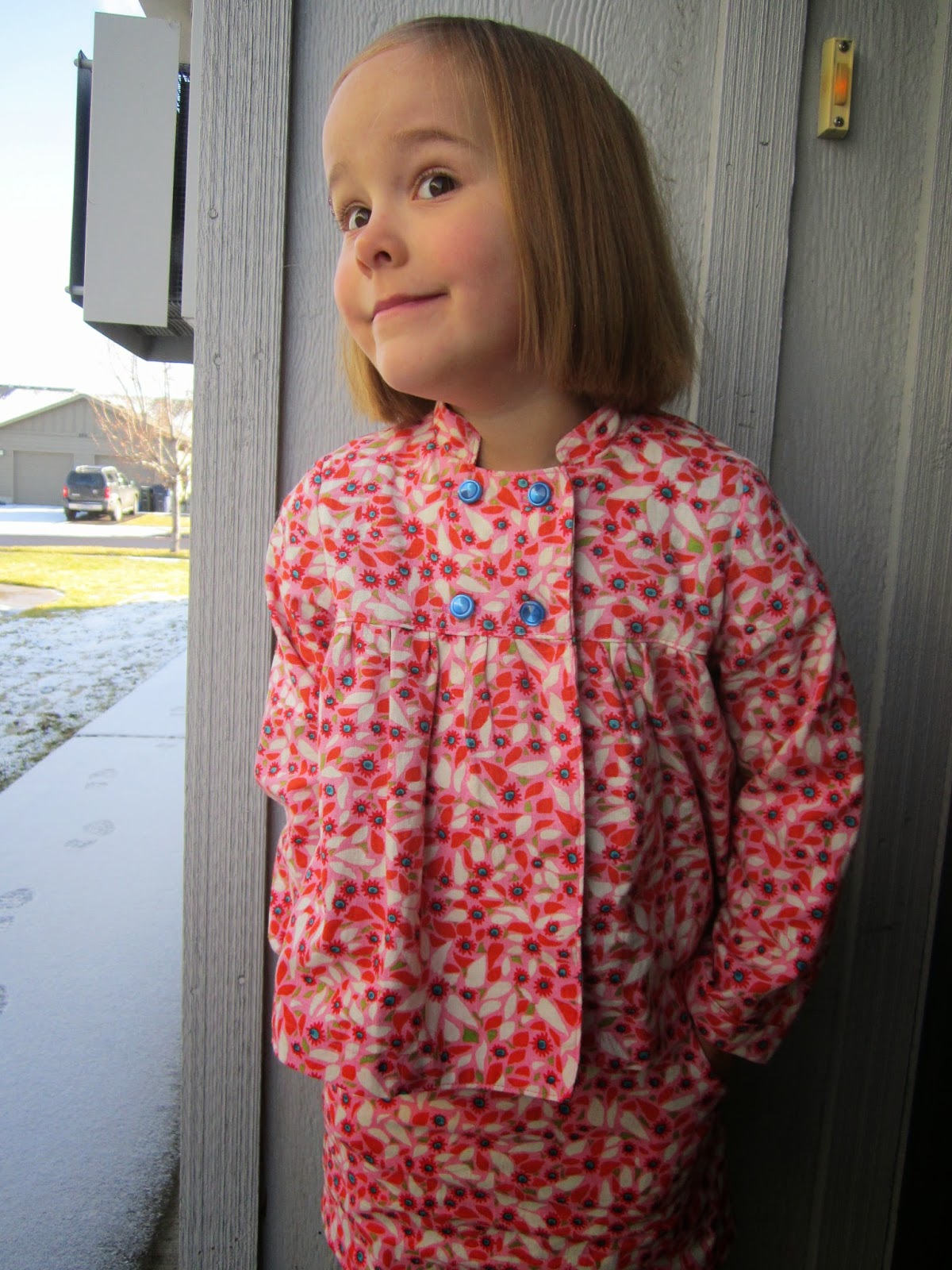 I originally sewed up this jacket and skirt four score and last December.  I'm pretty sure, anyway.  YIKES.  And you are correct - the skirt is a bit small.  Ugh.  I technically have enough fabric to make another, a size larger, if need be.  And thank the lawd I lengthened the sleeves, I believe.  Did I lengthen the skirt and the jacket itself?  I can't recall, but I think so - and again, whew!  It was SOLONGAGO. 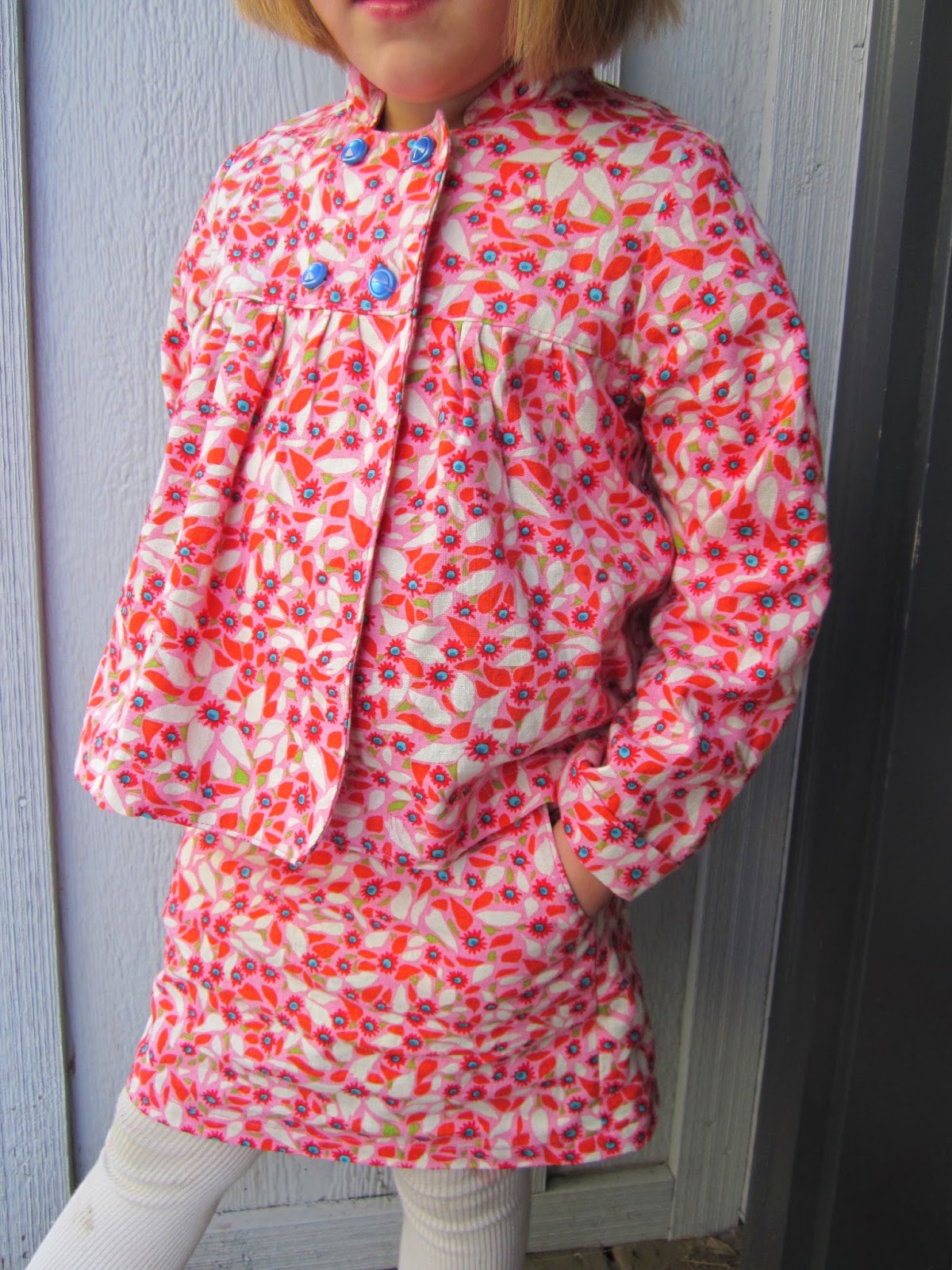 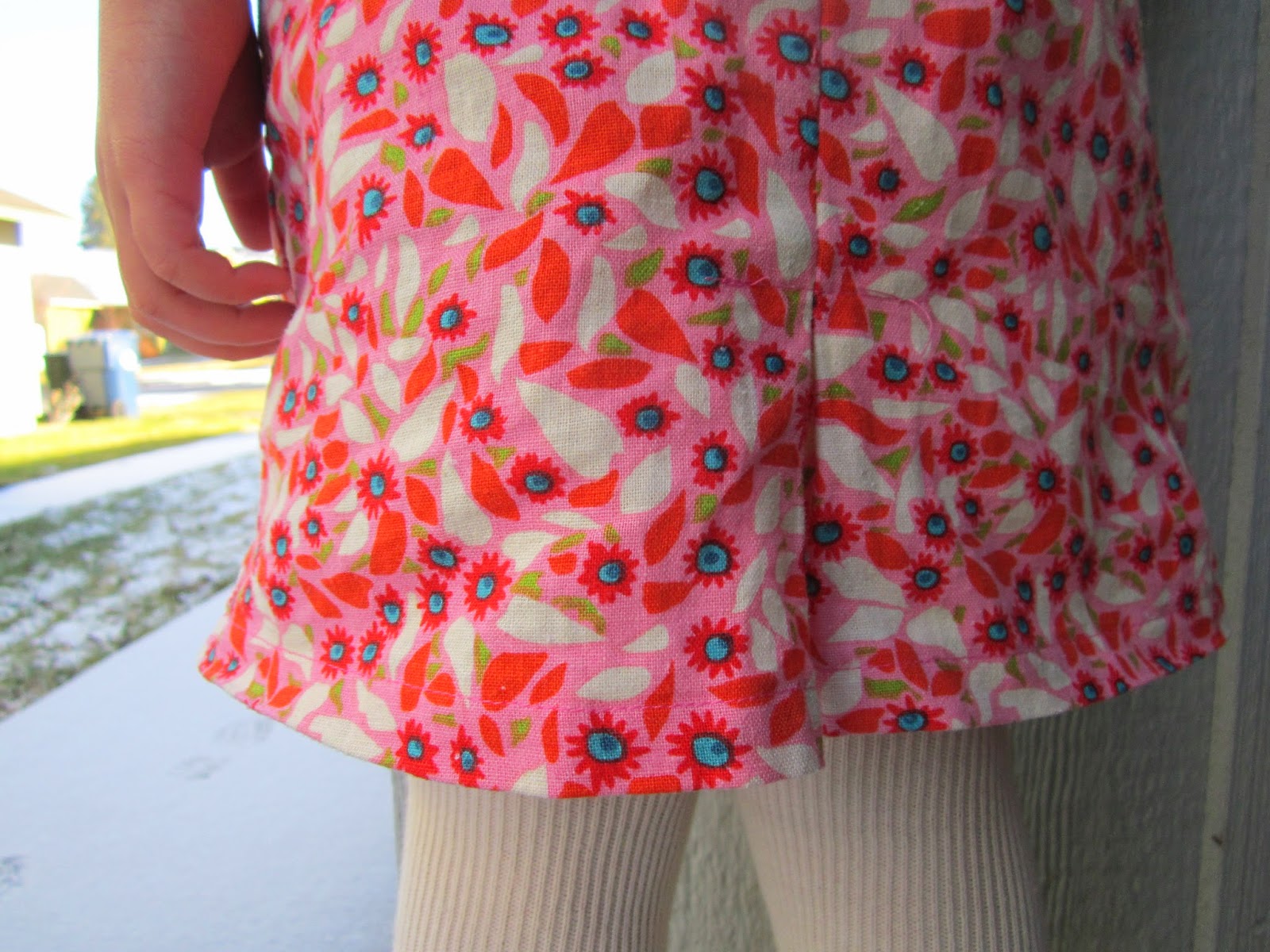 I remember that the Sunday Brunch outfit was a bit of a pain, though - for TWO reasons.  One....I added all the seam binding, and I wasn't sure I was even doing it correctly, so, totally judge my shoddy job.  I recall watching a video later on how to do it nicely, but the video wasn't great.  LOL.  Anyway, I attempted for a pretty finish ;) 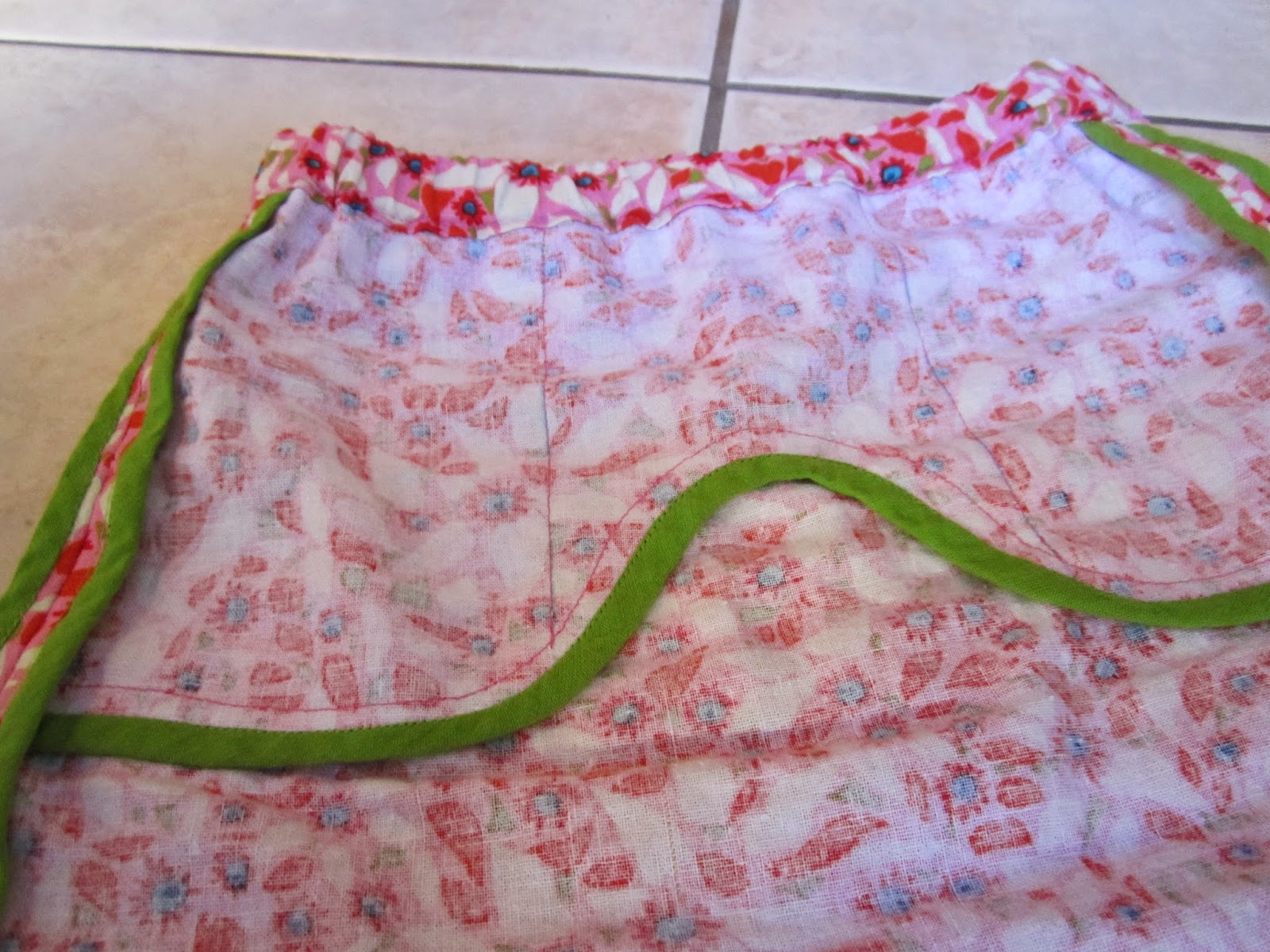 You may not be able to tell in the photos, but EFF.  If I'd thought ahead of time or known then what I know NOW, I would have added the buttonholes BEFORE sewing the top of the jacket to the bottom, if the construction allowed for it.  I ended up needing to do the bottom two buttonholes manually, I believe, and it always looks awful when I do that.  Anywho....it works, and I LOVE my buttons, which were upcycled or whatnot from Buttonhole Buttons (not a great site, btw).  I believe I picked them up at Bolt in Portland, though I know Twisted also carries them.
Other than that, naturally, the jacket and skirt went together swimmingly, and I love the results!  I am SO happy with my fabric choice.  As soon as I saw this print at Modern Domestic, I knew I had to have it, aha!

Now....the BLOUSE.  That was a whole other affair.  Firstly, I knew I didn't want something that buttoned up the front.  So.  My first attempt was to turn the Fairy Tale dress into a blouse....which was a sad failure, as I didn't give enough wiggle room AT ALL.  It was definitely a size too small, even after my careful planning.  Super sad times, because I'd gotten some pretty, off-white voile.  I wish I had a picture to show you.  And it WAS sewn back in January or whenever.  So....more timely.

Next attempt was in green voile....purchased a few months back - then finally ALMOST sewn up a few weeks ago.  And...BAM!  Shot down.  I was trying to do a Japanese pattern out of this great book I have....And I thought I'd be okay in doing it, but I ruined any chances it might turn out - by cutting it OPEN.  AHHH!  I was trimming down the seam allowance at the neck.  My bad.  And I do have a horrid picture of that, LOL. 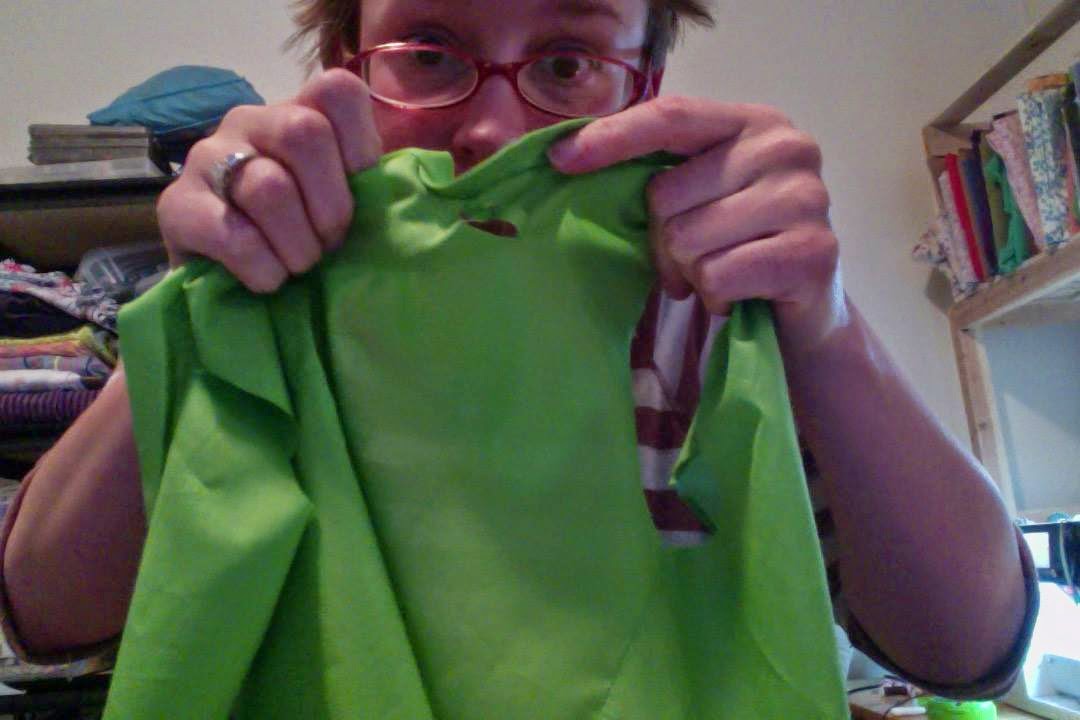 Then, when I KNEWFORSUREALLHOPEWASLOST, I realized I had some lovely blue shot cottong that basically matched the blue on the main fabric!!!  Say WHAT?!  So, out came the Puppet Show pattern by Oliver and S.  I knew it was way too billowy, so, I brought it in 2 or 4 inches (can't recall) at EACH seam....and it's STILL too billowy.  Ah, well.  It works.  And I could have shortened it another inch and a half, surely, but whatevs.  I wanted it done by this point.  I've had the whole outfit done for almost a month, and Camden wore it on Thanksgiving, but here I am, finally with photos, aha! 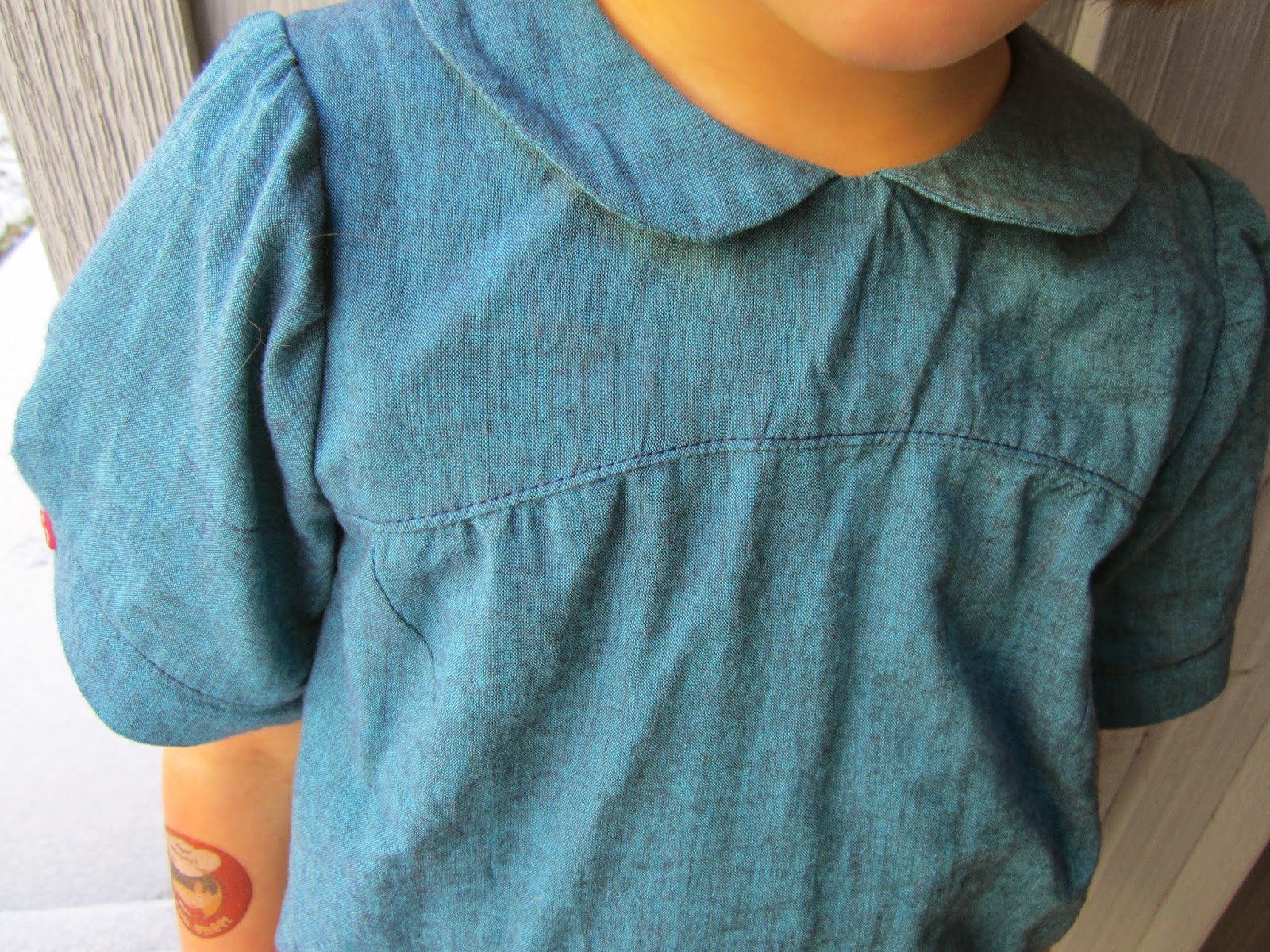 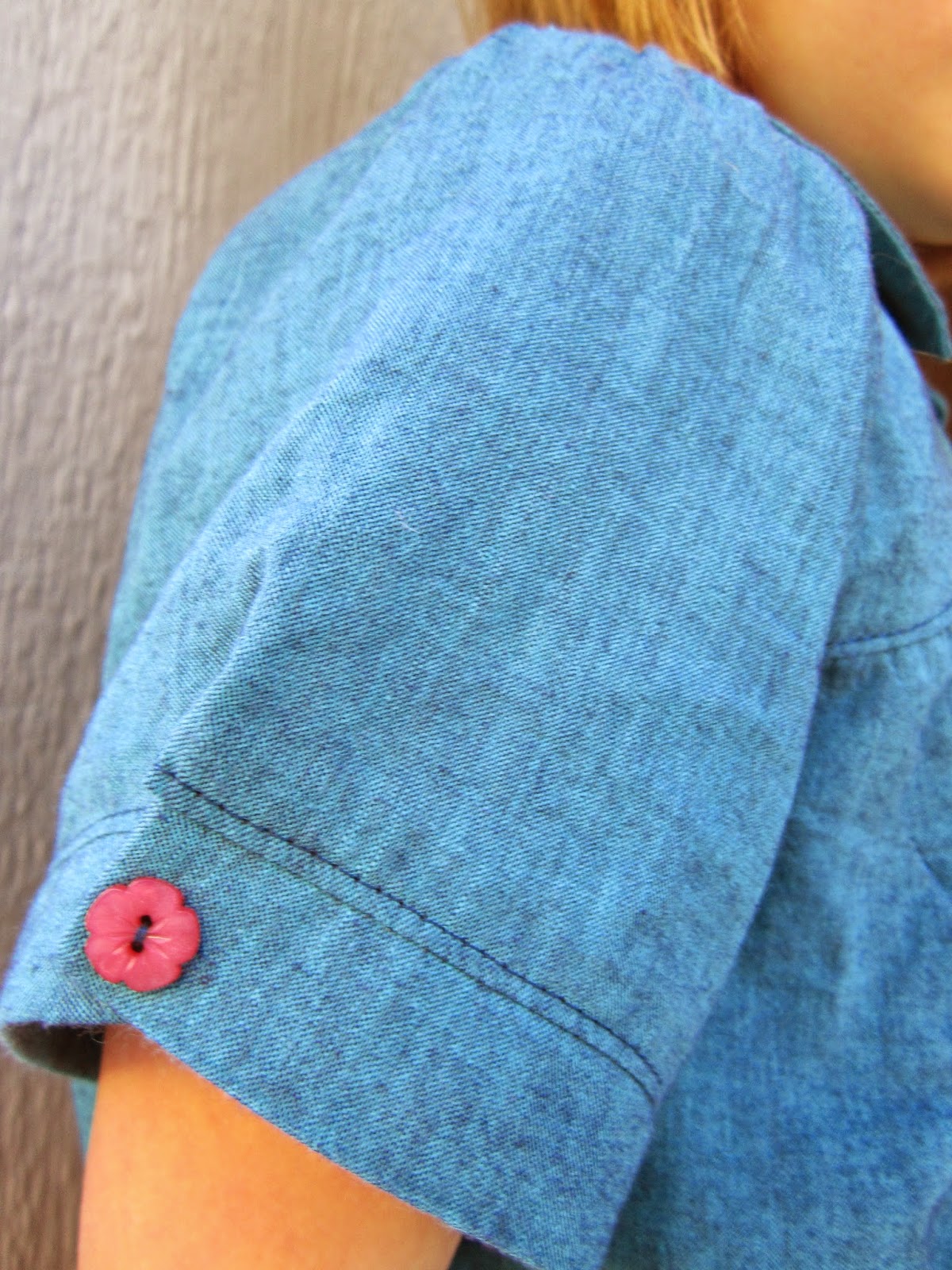 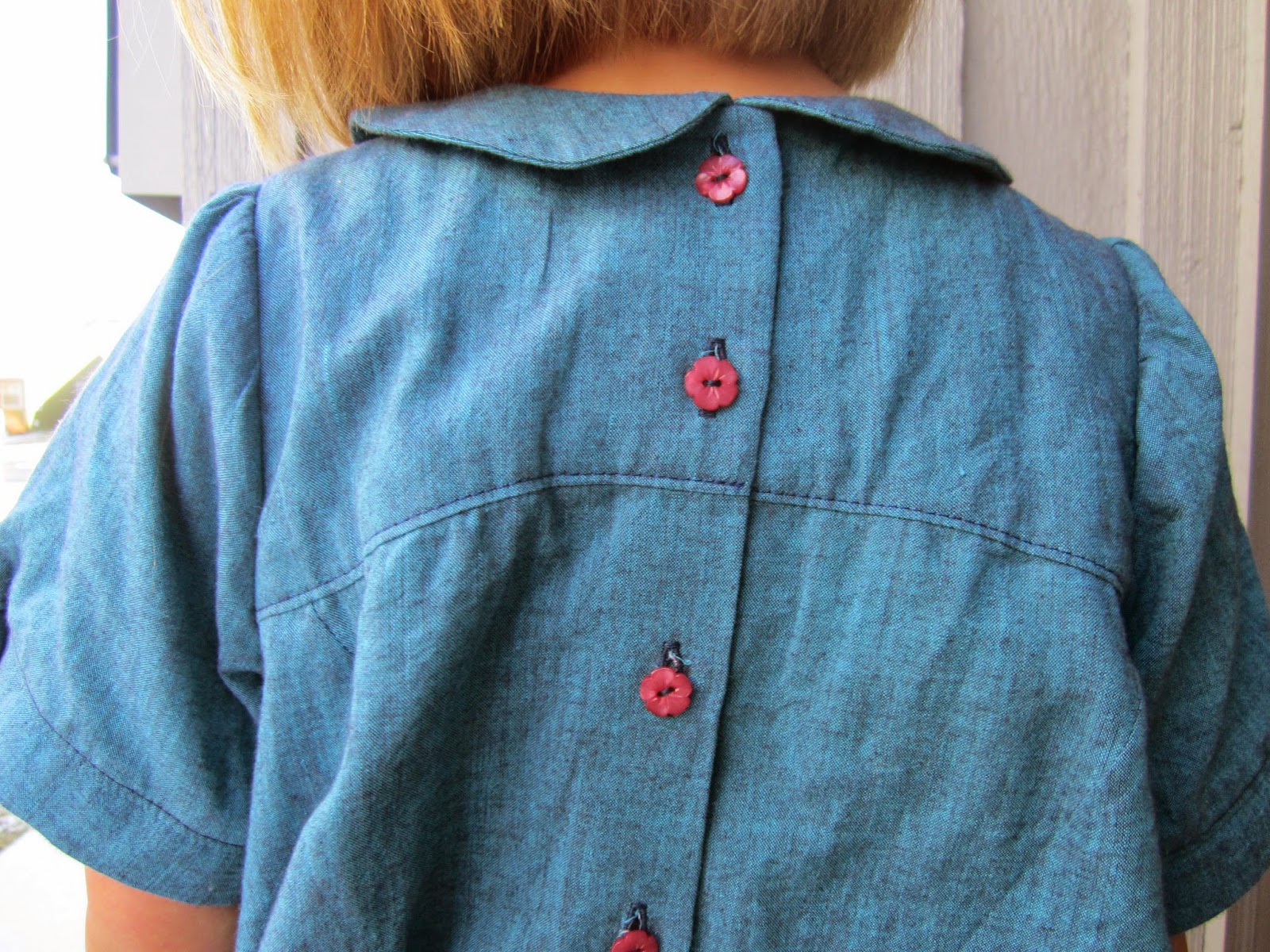 So, I had Camden race outside today to nab some quick photos.  It's done, dudes, so, whatevs on quality of photos.  I love the outfit and just wish I'd finished it eight million years ago.  I will definitely plan better for Sunday Brunch, round two, aha! 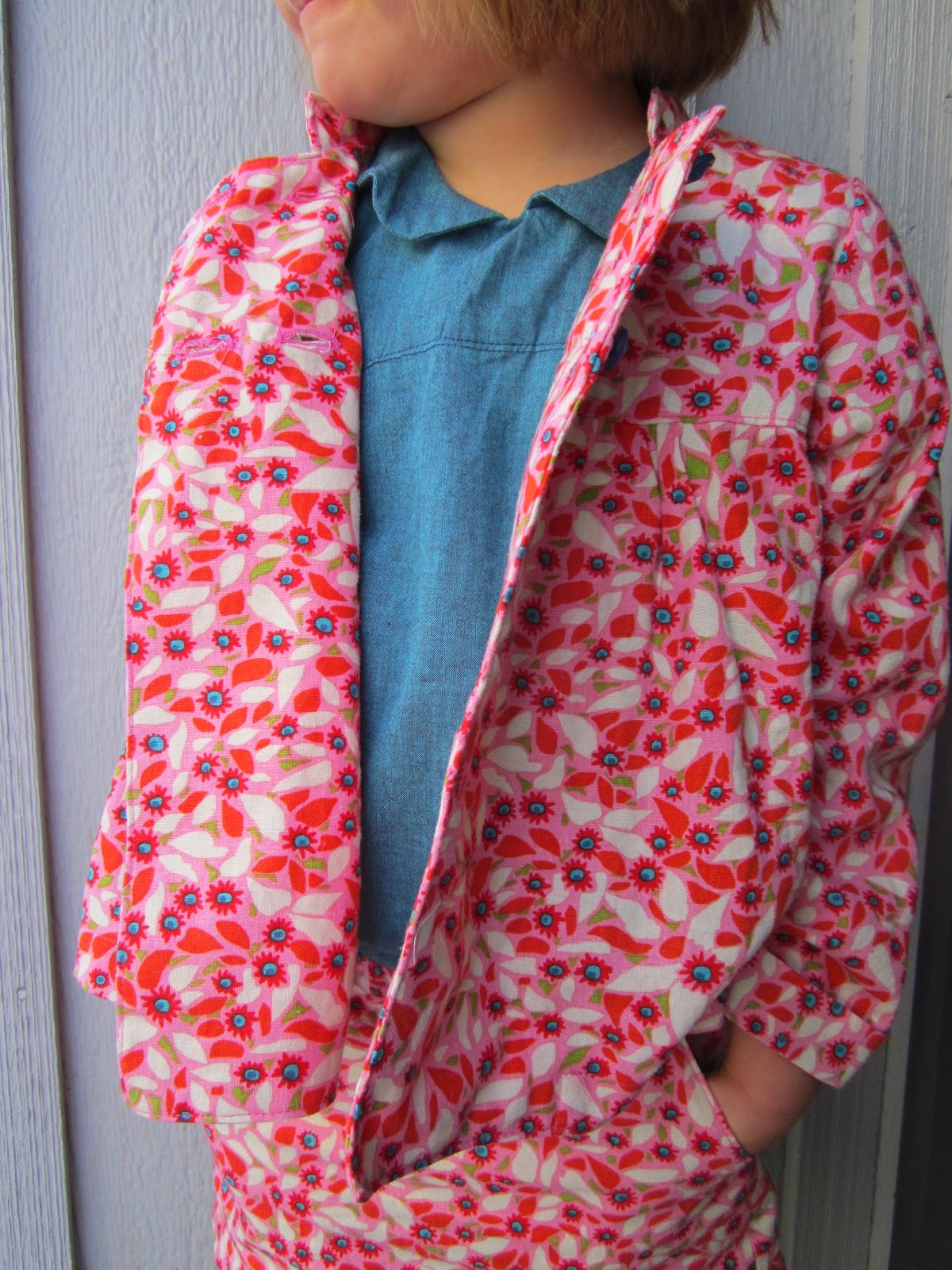 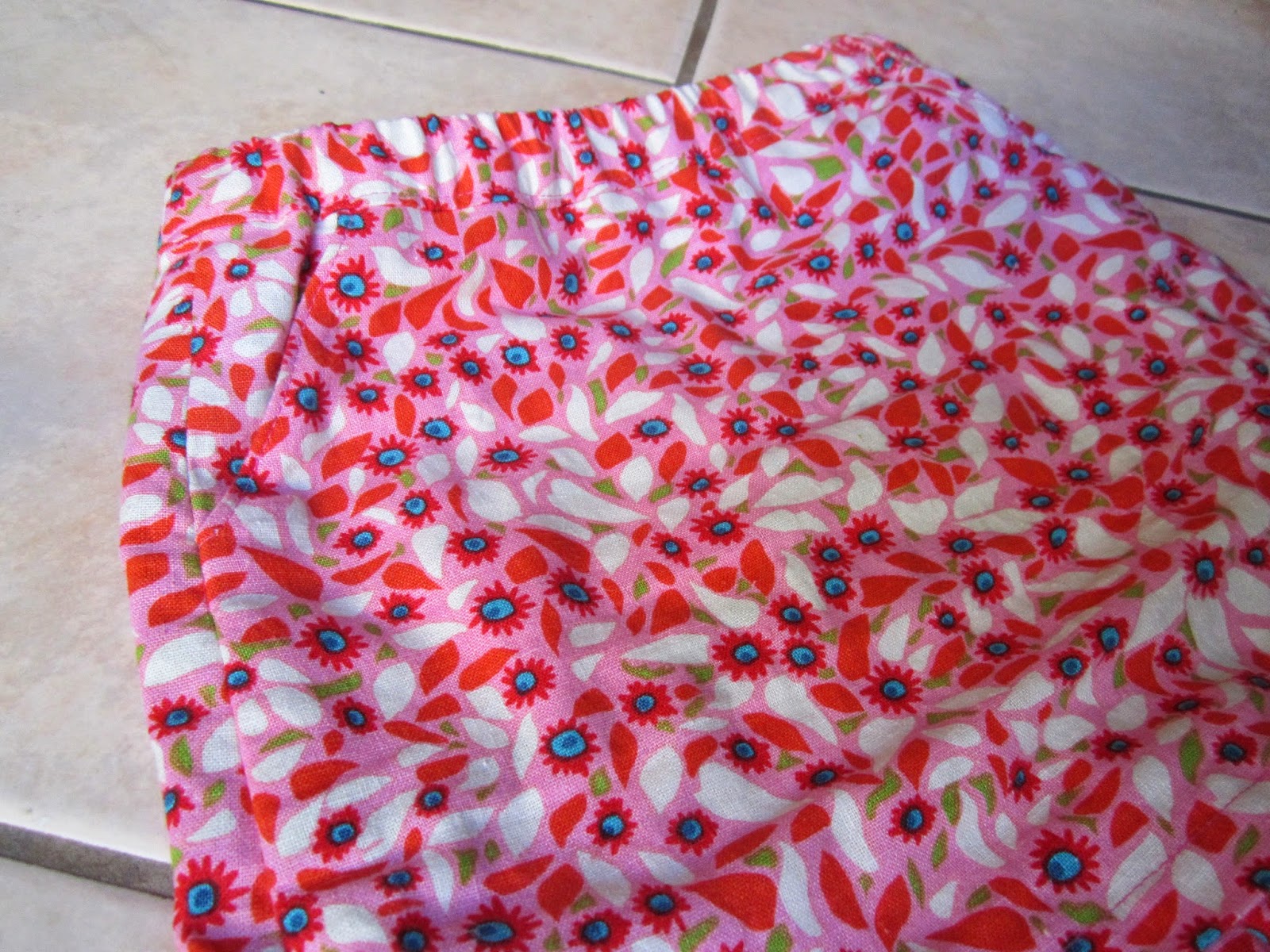 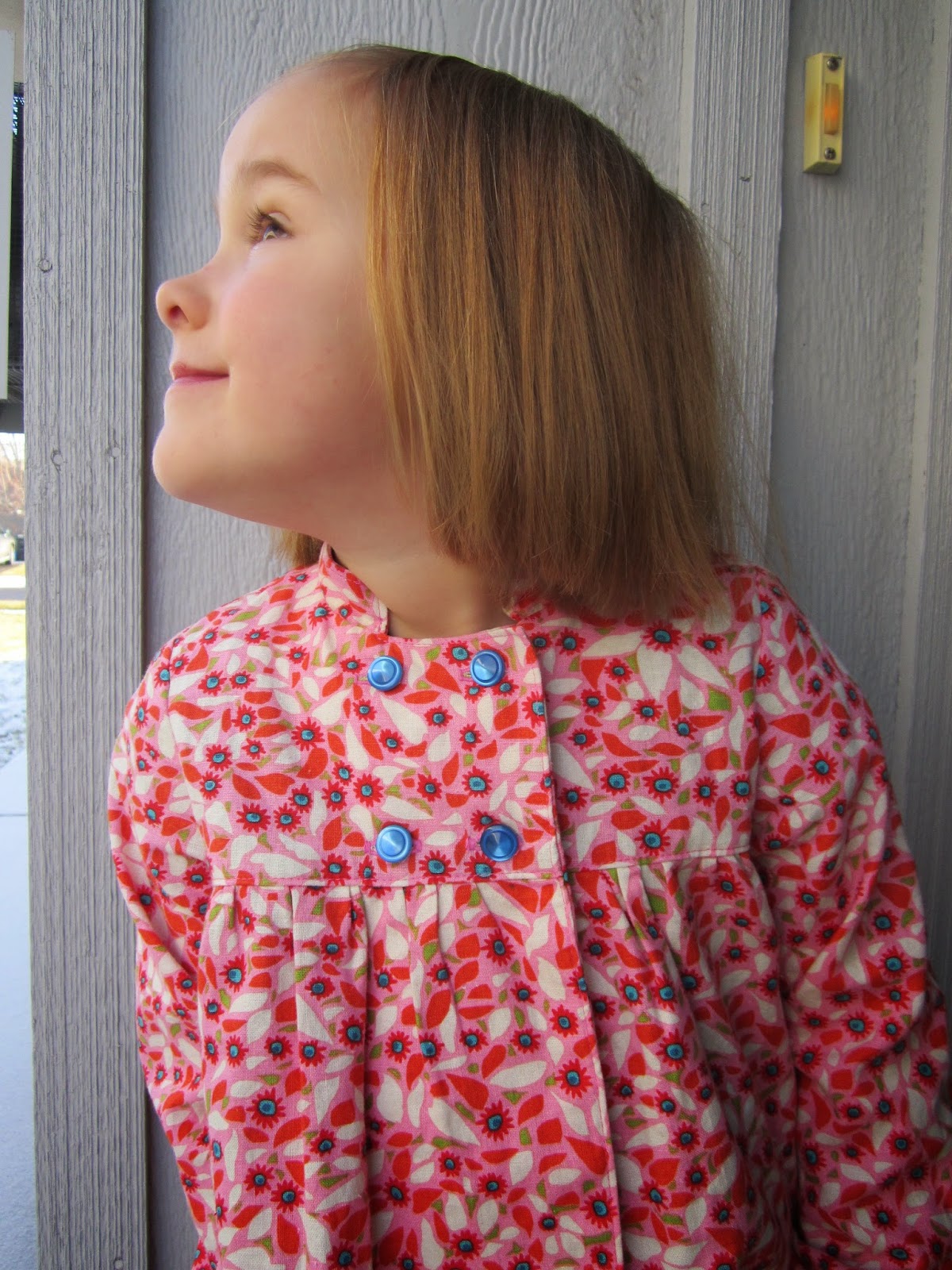 Posted by cottington at 5:15 PM