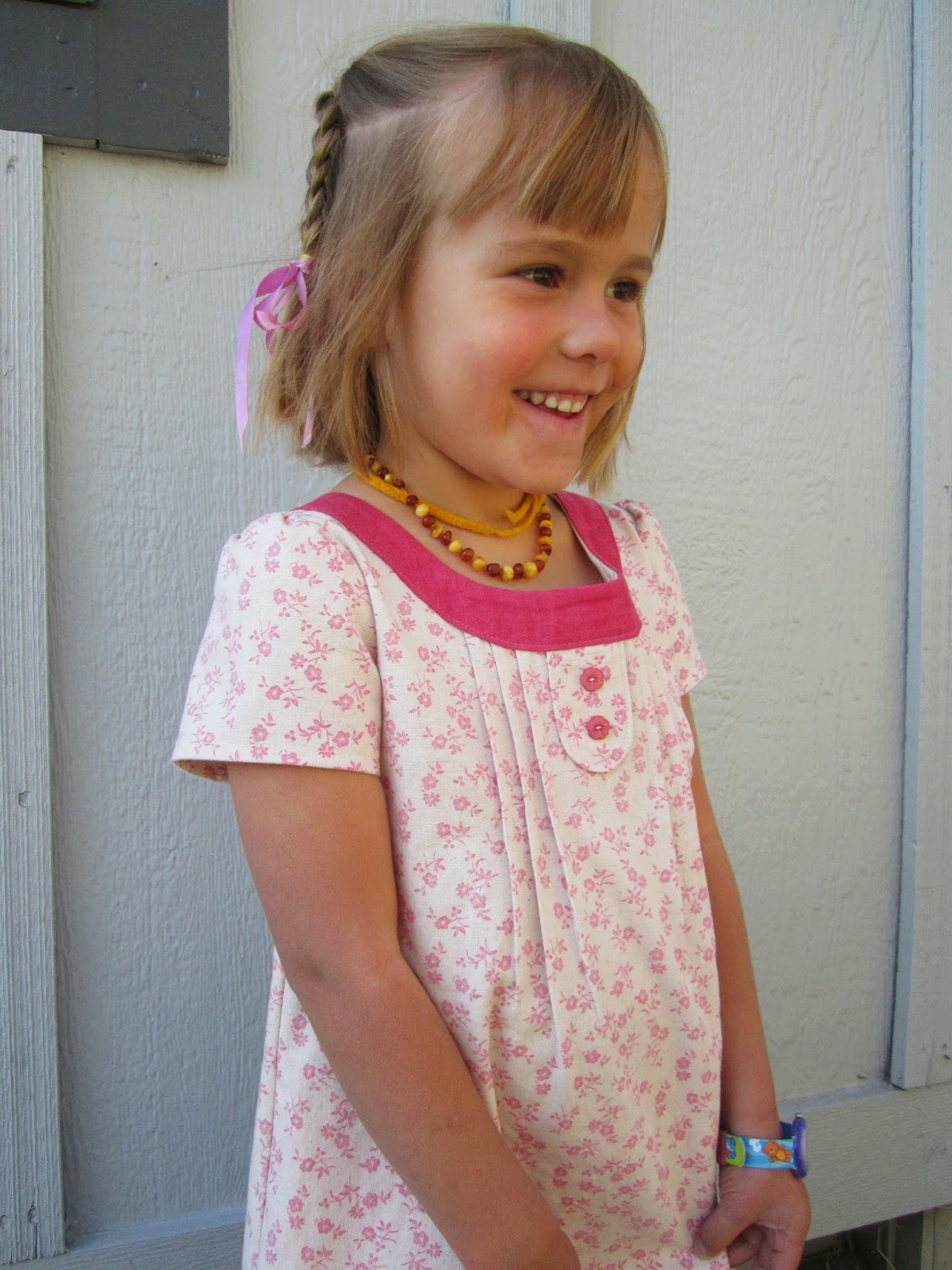 I have to say this straight off - the Family Reunion is an easy cheese cream pie pattern!!!  I like that from Oliver and S, which can be soooo detailed sometimes (which is also great....otherwise, why would Camden's closet be full of their patterns??).  It's funny, now that I have more experience with sewing - and especially with sewing Oliver and S patterns - I'm noticing that there are so many directions I can totally ignore.

I SAY that, but really, I still take a peek, because I'm that person who misses things alllll the time, so, I like to be extra careful....when I'm actually thinking about it.  And speaking of....with this particular pattern, I certainly DID mess up, as I though the facing pattern pieces were INSIDE the dress, but that was alllll a lie, LOL.  I didn't even know the term "facing" could mean something is on the OUTSIDE. I should go look that up.  The point is that I totally wasted time, thread, fabric and facing by cutting out the facings on shot cotton....because if I'd known it was an outside piece (meaning, if I had even LOOKED at the picture, aha!), I would have used the main fabric, as I wanted these projects to have a pretty clean look.  Suffice to say I decided the shot cotton would work on the dress version - but NOT on the top version, so, I re-cut, etc. 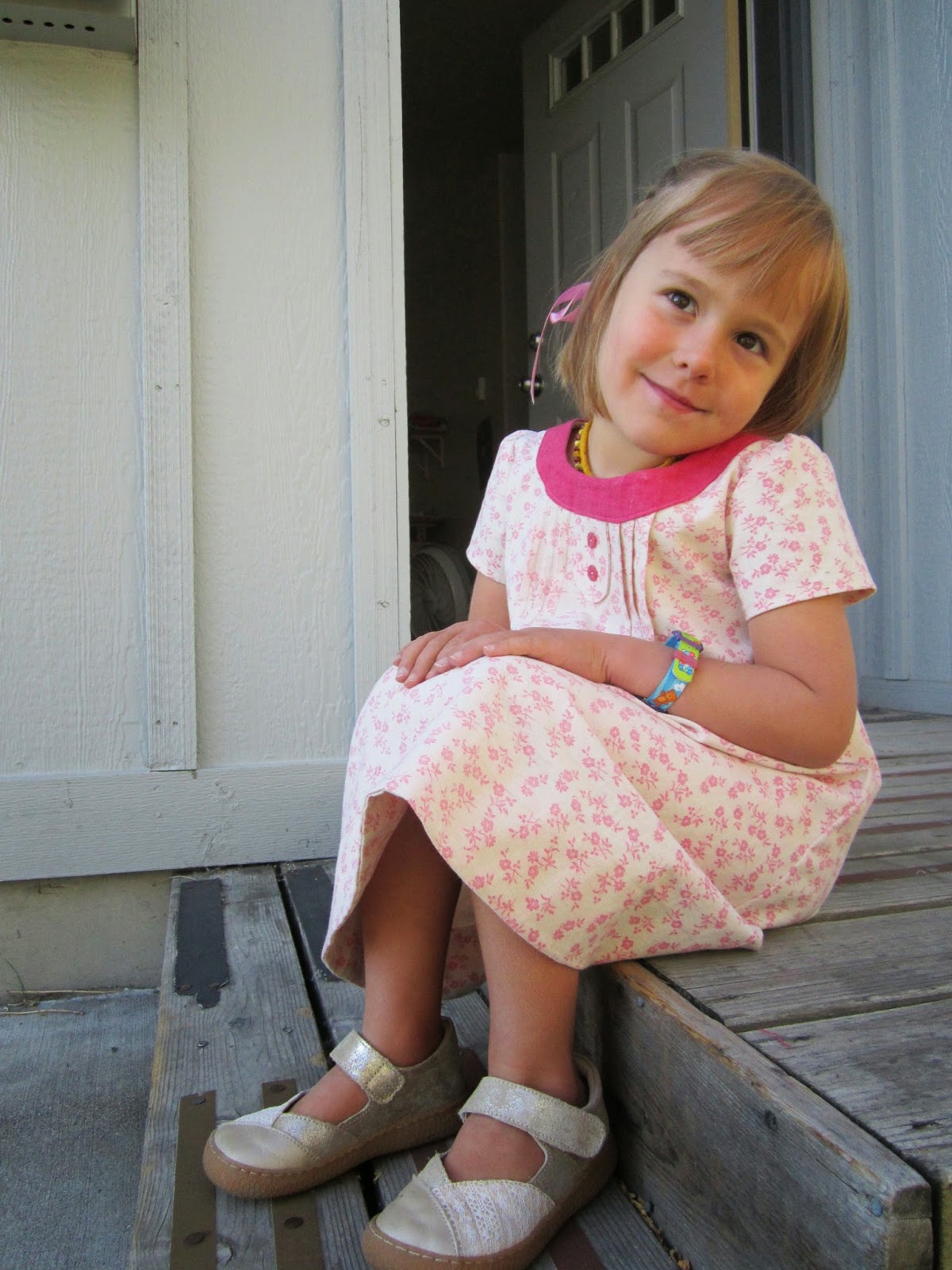 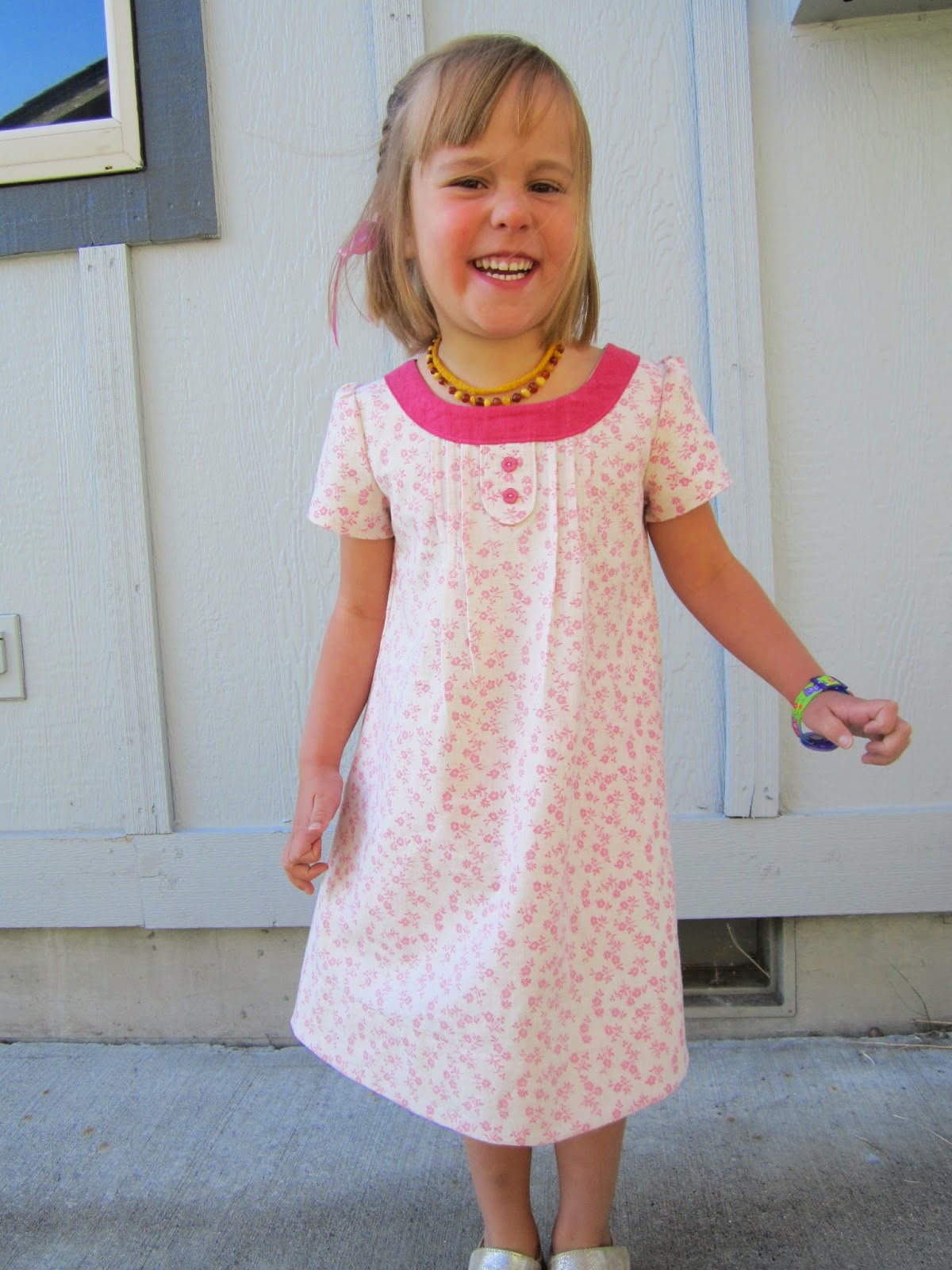 Sometimes, with Oliver and S, I remember to look up errata for a pattern, but I didn't happen to check this time, and everything went together smoothly (minus the facing mis-hap).  Pintucks clearly take some energy, especially because there are NINE just on one garment...and I was doing TWO garments.  So, I assembly-lined that shiz, and all ended well.

I again (I say this alll the time, I know!) used stash fabric.  Well, let's not get hasty - I did that for the top (I just hadn't know for the LONGEST time what to do with the ONE yard!) - but I bought the flower fabric for the dress just last October, actually planning to use it for a coat.  Oops ;)  (And now that I'm thinking on it, wouldn't a VEST for the Art Museum pattern be cute with that???)  I had to purchase new buttons (seriously...I have soooo many great buttons; why does NOTHING ever work for a given project???  I guess y'all should refer to THIS post from last year) today on the cheap - coupons at
Jo-Ann Fabric Store.  Tiberius and Camden helped out, and a nice customer at the store chatted us up while we did picked them out.  (Side note:  I have a beef with Jo-Ann Fabrics.  Why'd you change up the button situation???  I swear they removed a line of buttons and replaced it with an even cheaper-looking line, which is a dreadful thing!) 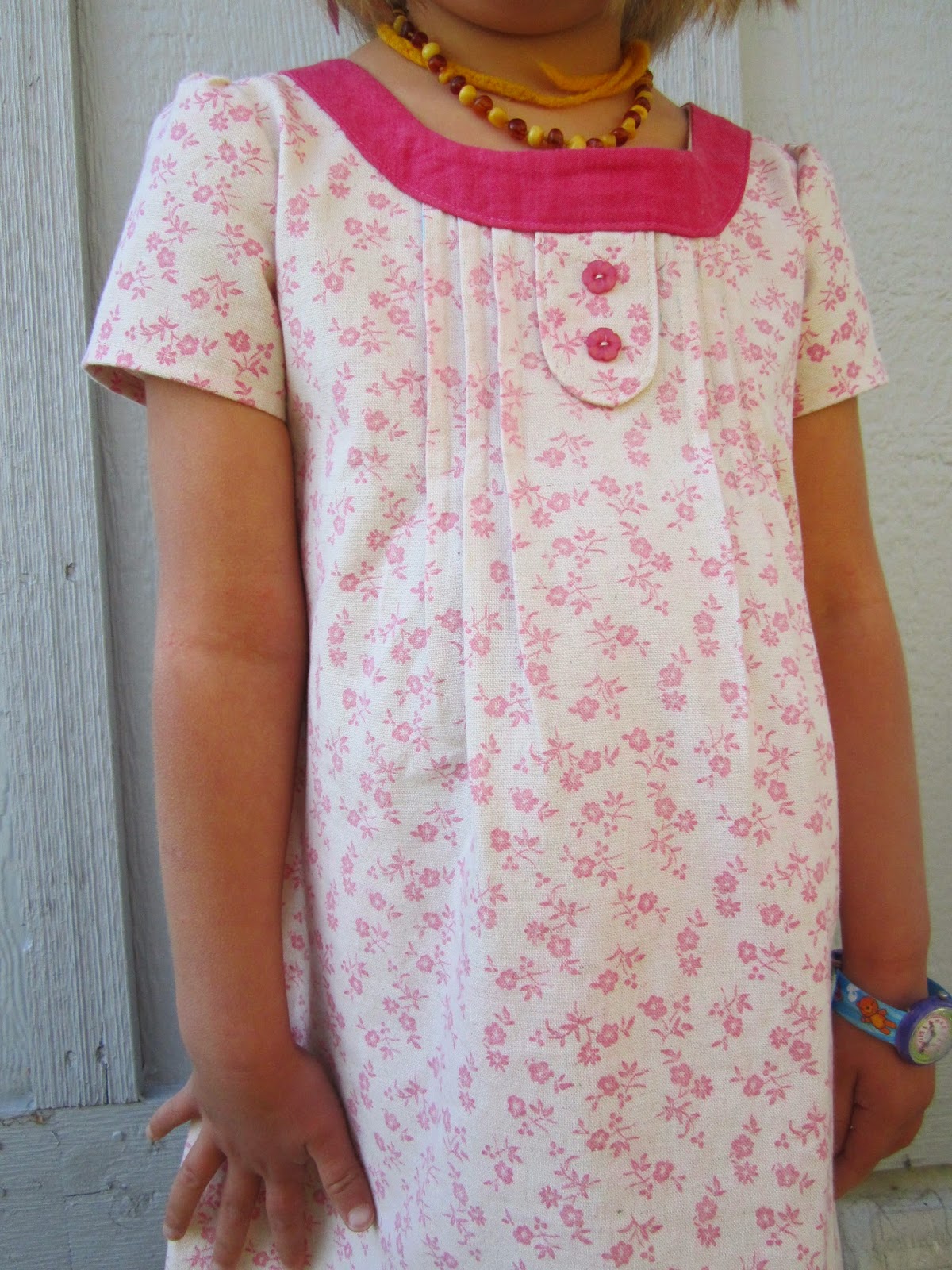 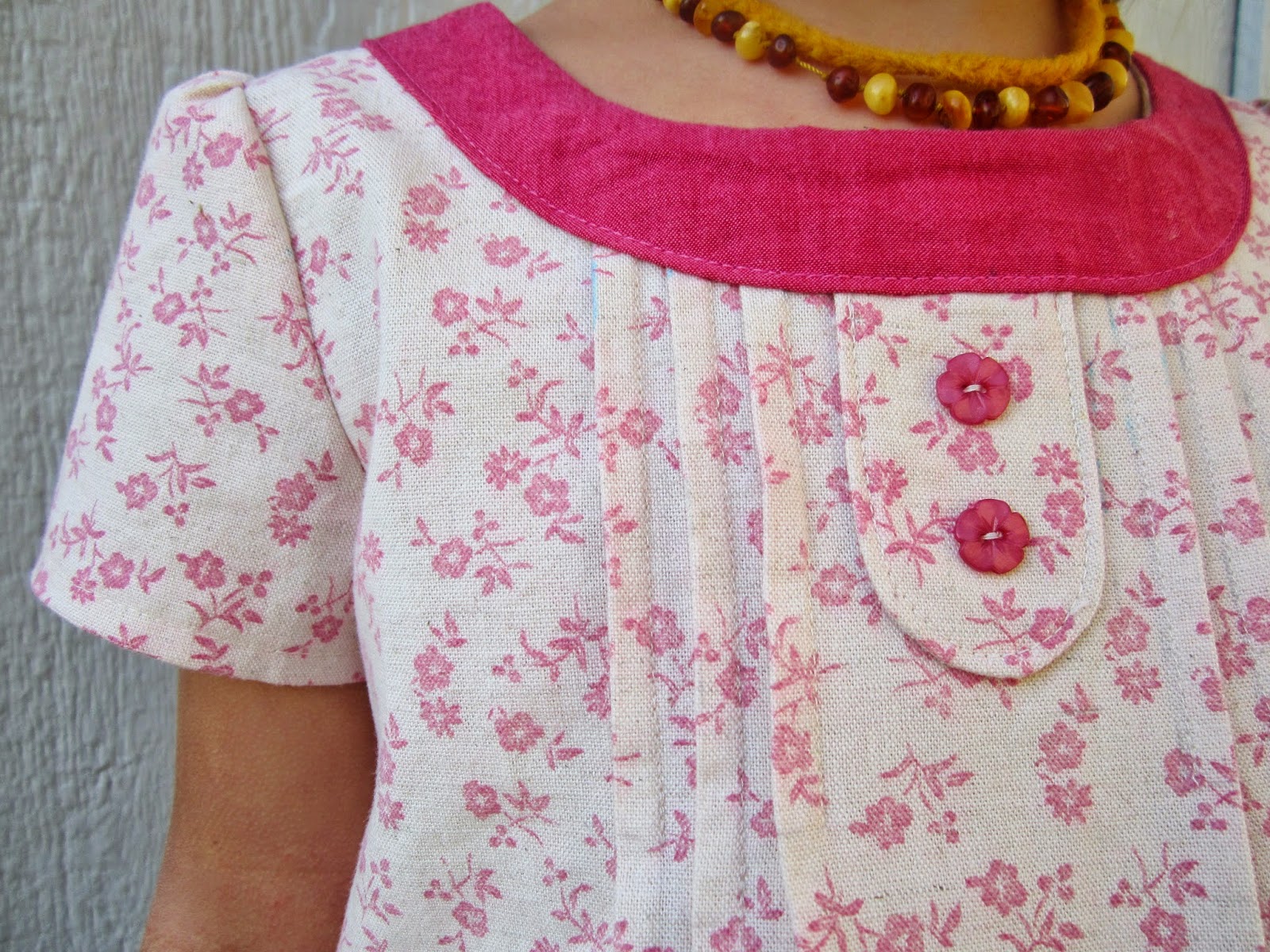 The only modification I made to the top was to lengthen it by an inch, as I know how that story will end if I do NOT lengthen.  And, as seen in the pictures, I chose to use the button tab for the dress and the ruffle for the blouse.  You may have guessed by now, but I'm not super frilly and into ruffles, so, this was stretching it for me, and I think it works....???  Jazzes it up a teeny bit? 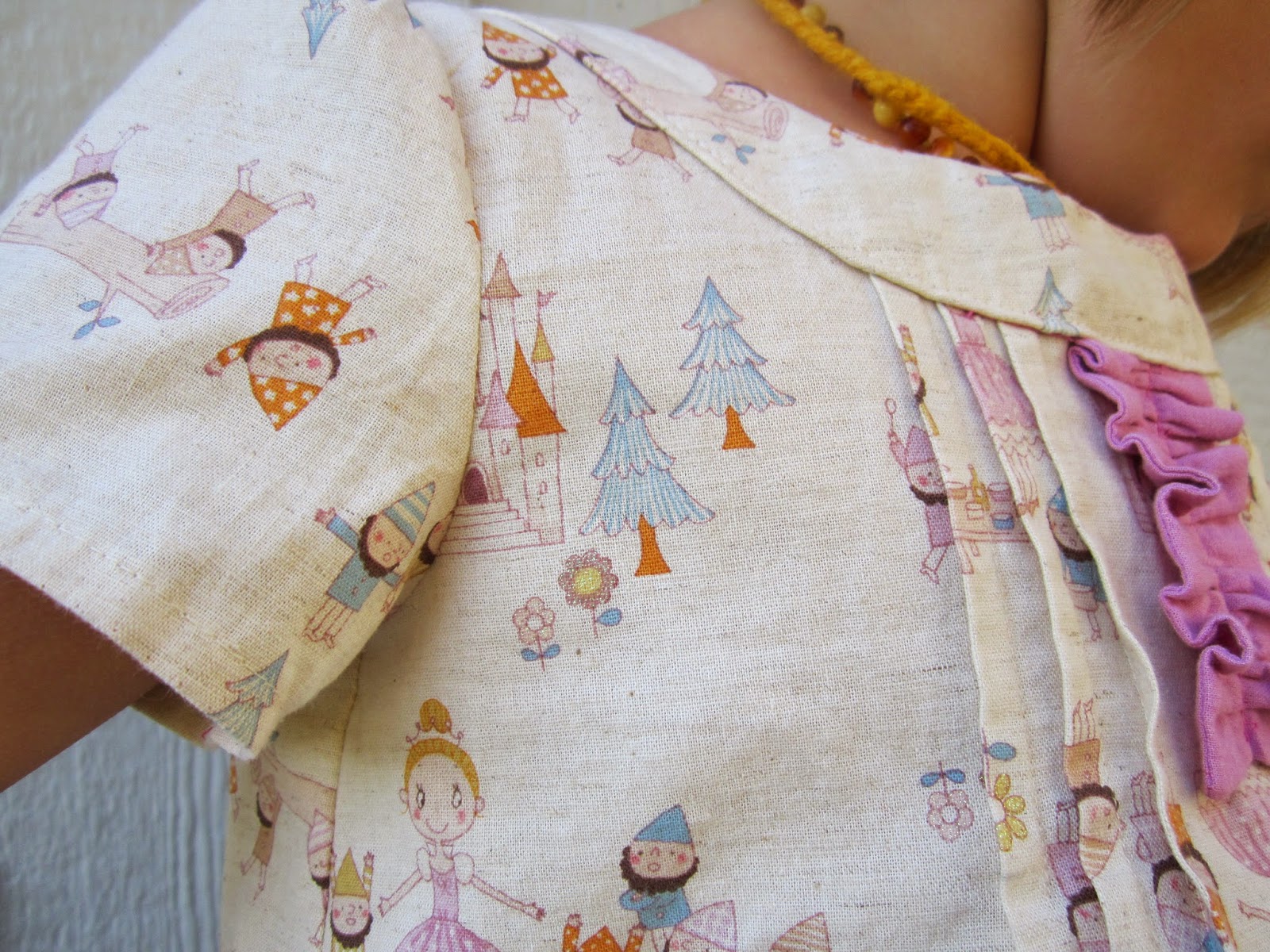 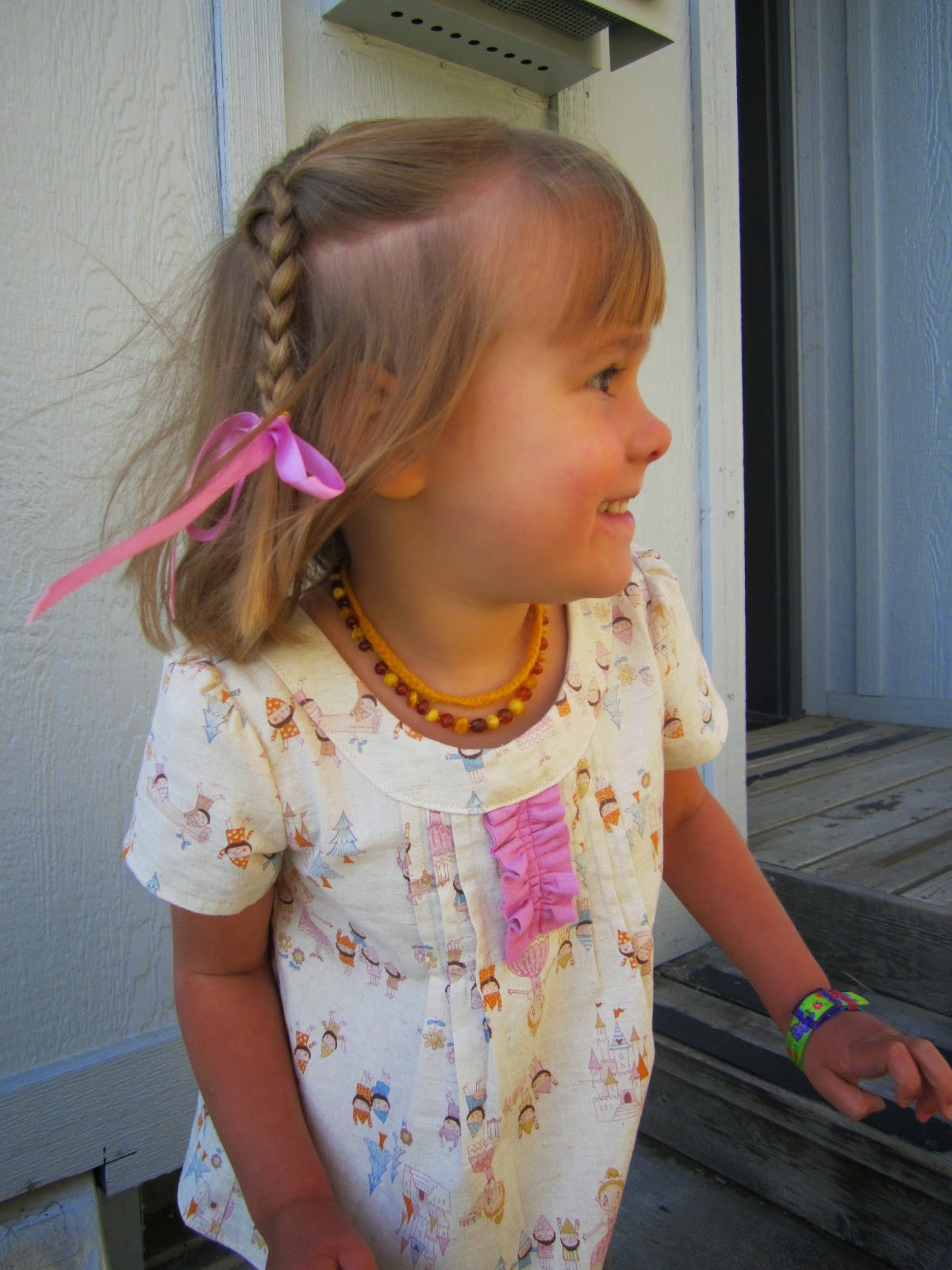 I did my most BANG-UP sewing job EVER on the snaps, too - check it out!  I have a weird thing about sewing on buttons.  I refuse to sew them on by machine, as I think I make a tougher anchor than a machine (I'm weirddddd), and I sort of like doing it, even though I'm straining my eyes and all hunched over (no, seriously, I was pretty sure I threw my back out for a split second while sewing those buttons).  I was super impressed, though, by my snaps.  When you have to use snaps as an anchor point, it can be tricky trying to finagle the sewing of them under a decorative button.  I'm not sure how any of y'all do it, but I want the snaps to be secure....yet not UGLY, right???  Check it out, though!

Size-wise, I did the 5 - at this point, I'm sadly just trying to get things SEWN for Camden, so, fun and fancy isn't in my vocabulary; I didn't want something difficult (I honestly felt bad for NOT using the main print as the facing....and then adding piping with the shot cotton, but I told myself to slow my roll), so, I'm sort of the pumping-things-out mode.  You can see the dress definitely looks big on her, which is obviously no fault of the pattern - but add to it that I used a heavier-weight fabric on the dress, which does that awkward thing where it looks stiff/doesn't quite fit right.  I like to think she'll grow into that.  The shirt fits beautifully, even if the photos on a COLD, WINDY morning don't capture that well. 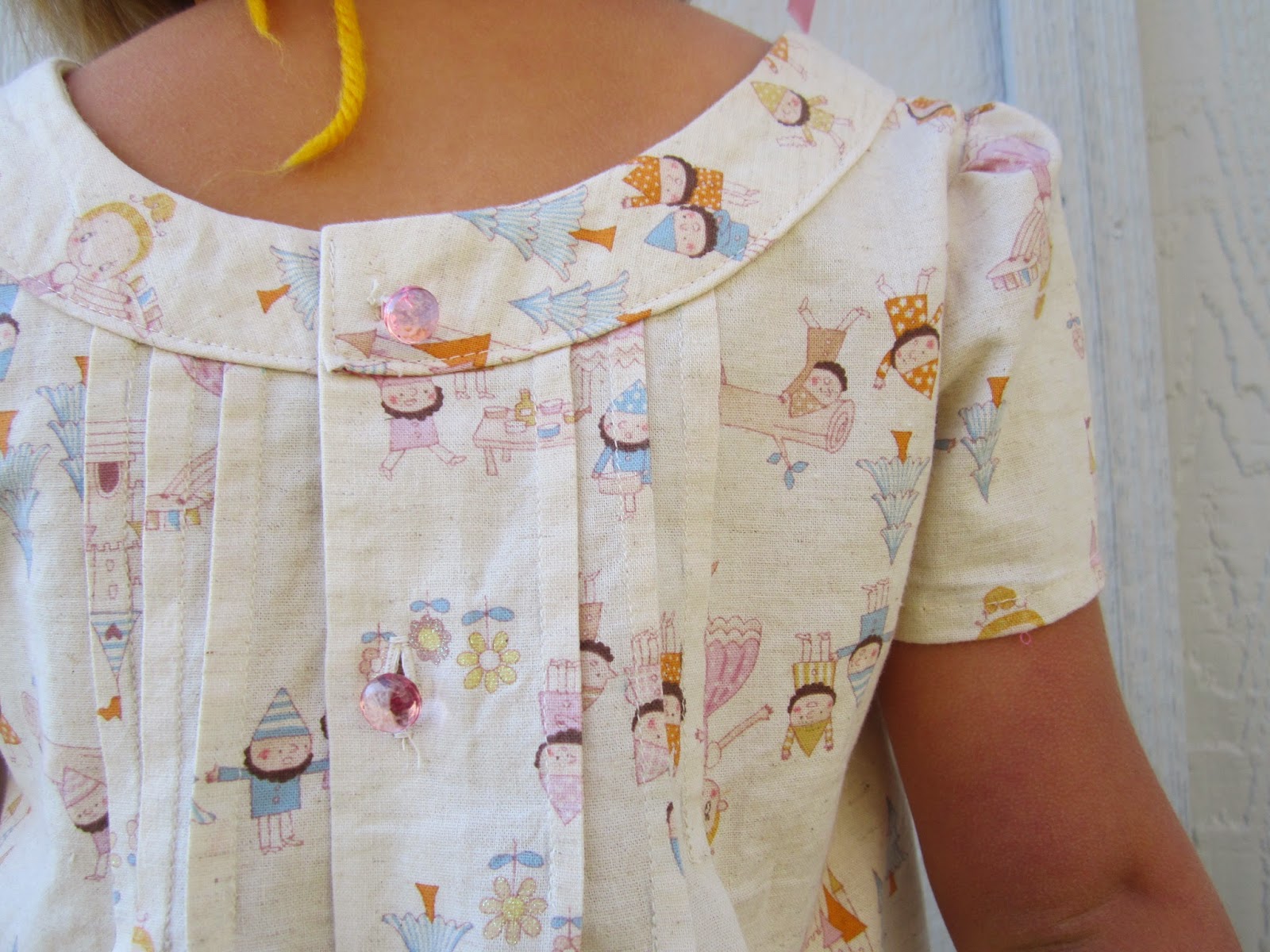 All in all, a lovely pattern, and I'm glad I sewed two of them - bang for my buck and all ;)  Next up???  Likely the School Photo dress....in HEDGEHOG fabric - holla!

Posted by cottington at 9:19 AM