Listening to a little Schubert and Beethoven while Camden bathes - figuring I should whip up a wee blog post about what I HAVE, indeed, been working on.  It's been radio silent on my blog, as I've been knitting furiously these past several weeks.  And doing wee, teeny blog posts on each item would be silly, to say the least, so, I took a few pictures yesterday - nothing fancy, and clearly NO action shots, but it's what we have ;)

Incidentally, I was basically forced to knit so much, as my machines were up in Portland, receiving a yearly service.  While I have a back-up machine at home, I can't do any projects (well, almost none) without my serger.  Lack of awesome weather put a stop to me picking up my machines a couple weeks ago, though I WAS able to crank out ONE project, as it was fully lined - a gift for Camden's friend in Vancouver.  I do not have any action shots of the friend in it at this point, but gosh - I sure wish Camden had a red coat!!!  :O  I've used the DMK Stylish Kid's Coat once before, and it's a super easy pattern, things going together quite well.  I did size up to 4, with a length of 5.  It's not supposed to be snug, by any means, but a size 4 is quite roomy on camden.  I did use a 1/2" seam allowance for the sleeve/side seams; otherwise, the pattern used a 3/8" SA.  As you can see below, I also used decorative stitching for underneath the collar - adding the girl's initials.  A fancier move would have been to whip out the embroidery module, but I was lacking time. 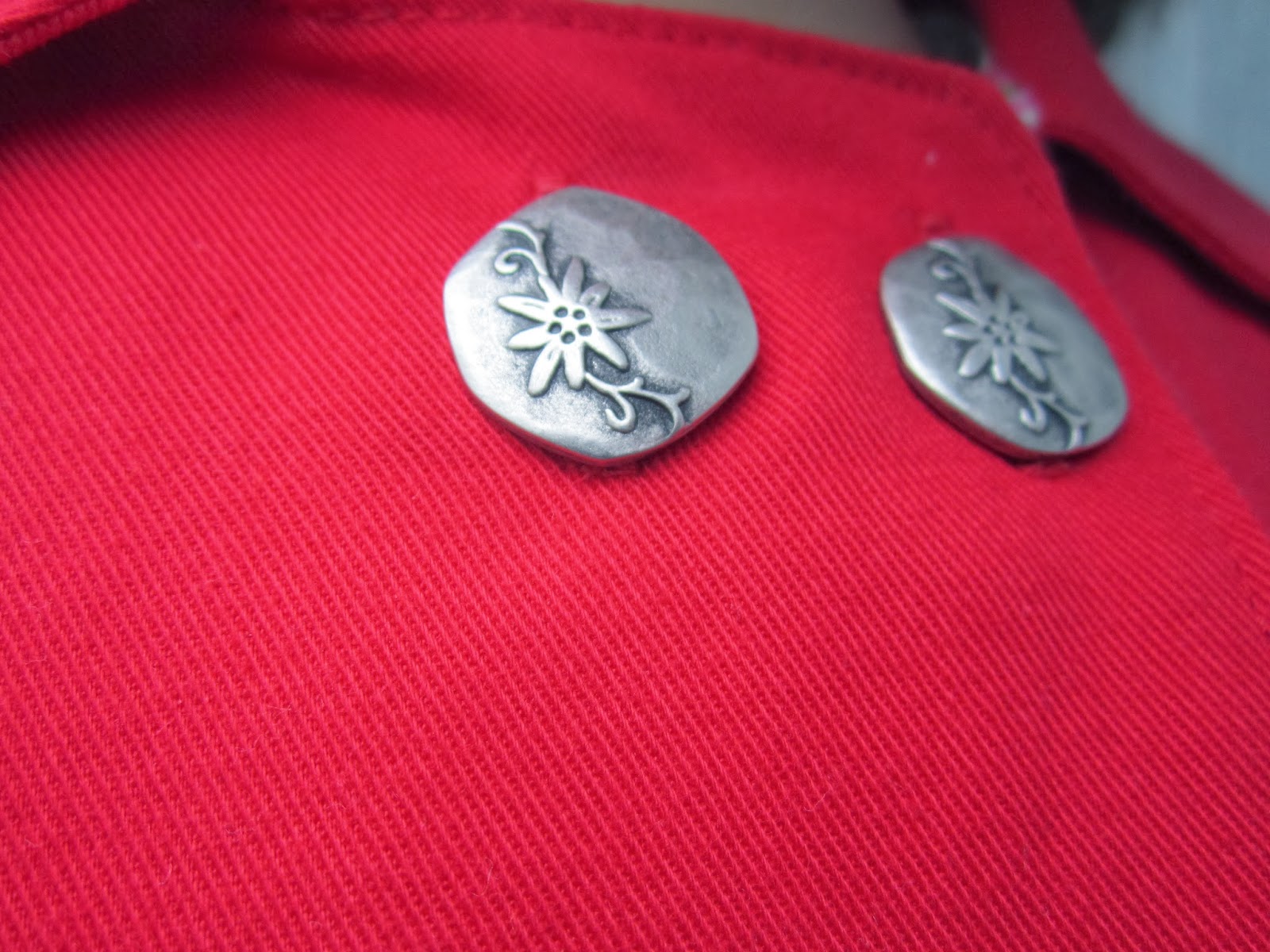 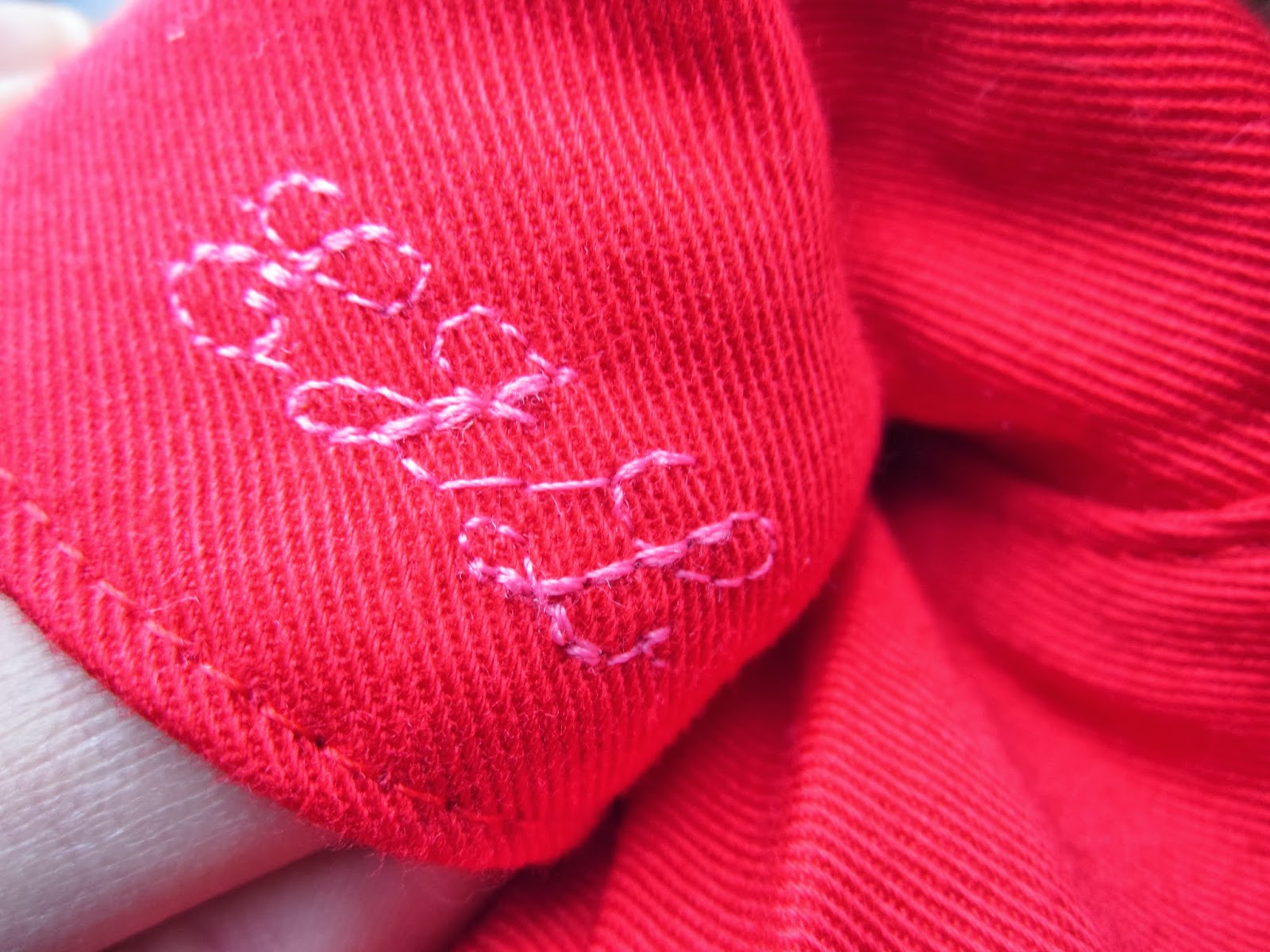 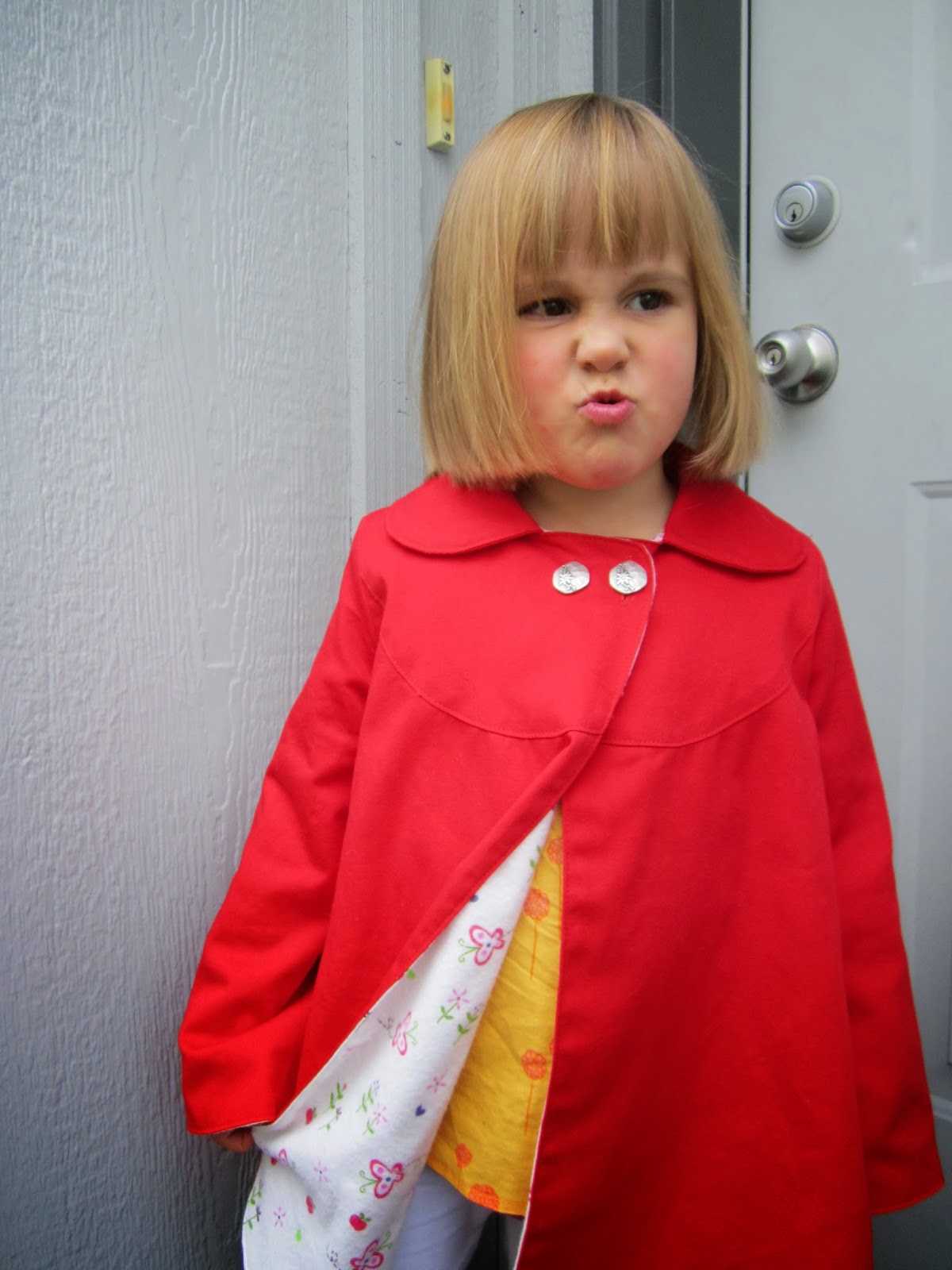 Getting back on topic....I have knit a million (well, CLOSE) pairs of socks, hats, longies and a sweater!

I am awesome in that I used my Socks That Rock by Blue Moon Fiber arts in tie-dye yarn to make four pairs of socks and two hats!  Back when Camden was a baby, I knit her a toddler-sized sock, but my gauge has changed since then, and I wasn't able to replicate the sock, so, I took it out and re-did it, along with making the match - finally ;)  And she LOVES to wear them allll the time!  I did have trouble with pooling on this size at the gauge asked for, so, I added stitches, which made them too wide around her leg/ankle, which is a bummer.  I should have decreased sooner - before heading into the heel flap, but such is life.  I used the Children's Easy Lightweight Sock Pattern.  I have the paper pattern, but it can be found HERE on Ravelry.

As for the baby socks I have knit up - I've simply used the Plymouth Yarn Happy Feet sock pattern for alllll of them - one pair, including one tie-dye hat, is a gift, and my wee baby gets the same set, so, as you can SEE, I'm alllll done with tie-dye yarn.  For realz.  The hat to match the tie-dye socks is the Twist pattern by Melissa Goodale.  I also have the paper version, along with the sister pattern, the Sprout hat.  I love the pattern, but after knitting two of those in fingering weight yarn, I'm sort of worn out, aha! 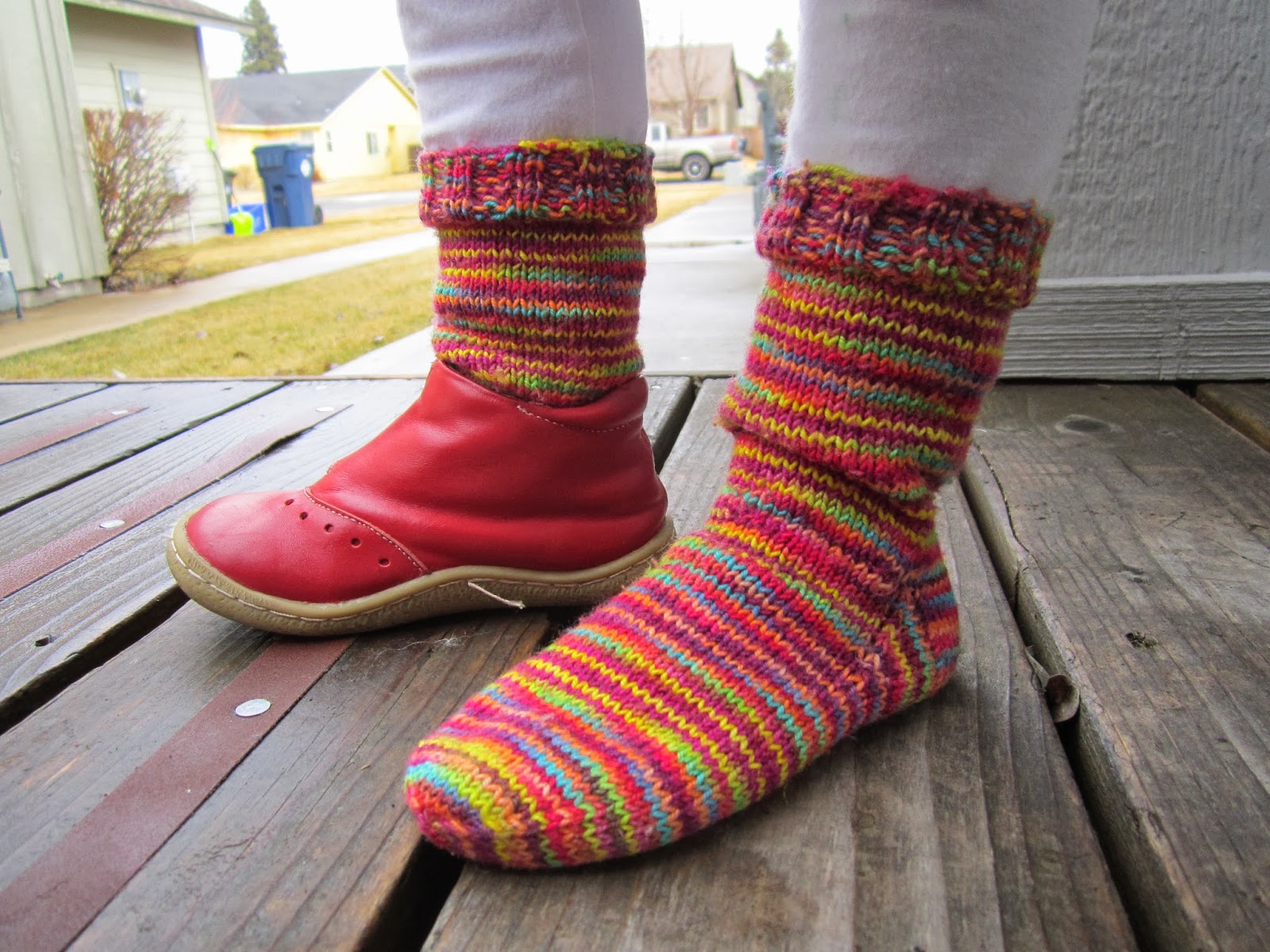 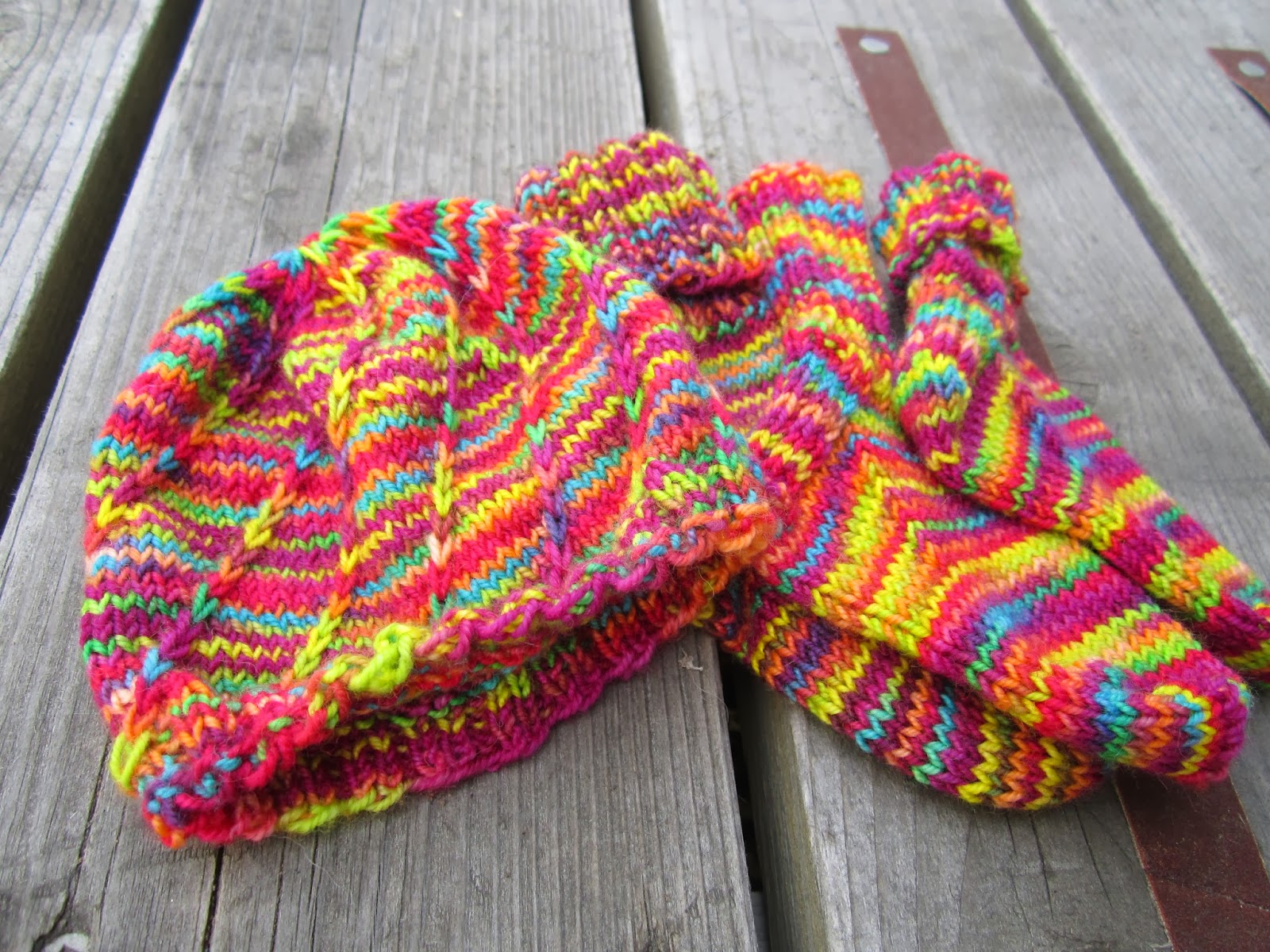 For the longies, I used the tried-and-true Evie Pants pattern by Marilyn Porter.  It's what I used with Camden back in the day, though I hadn't knitted tiny longies for her .....tiny things definitely go faster ;)  I've done two pairs so far.  The green pair is Mosaic Moon, Salmon (of??) Wisdom and the blue pair is Maclir, also by Mosaic Moon.  The Salmon colorway was left-overs from a sweater Camden has, and the Maclir was a purchase from a mom on Ravelry.  I did make a hat to match the Maclir pair - the Otis pattern (FREE, people!!!).  I do recognize it's larger, aha!  Poor baby may swim in it, unless he/she pops out with gigantor head.  One never knows.  Anyhow, I DO have one more pair to knit up, when I receive yarn purchased from another mom. 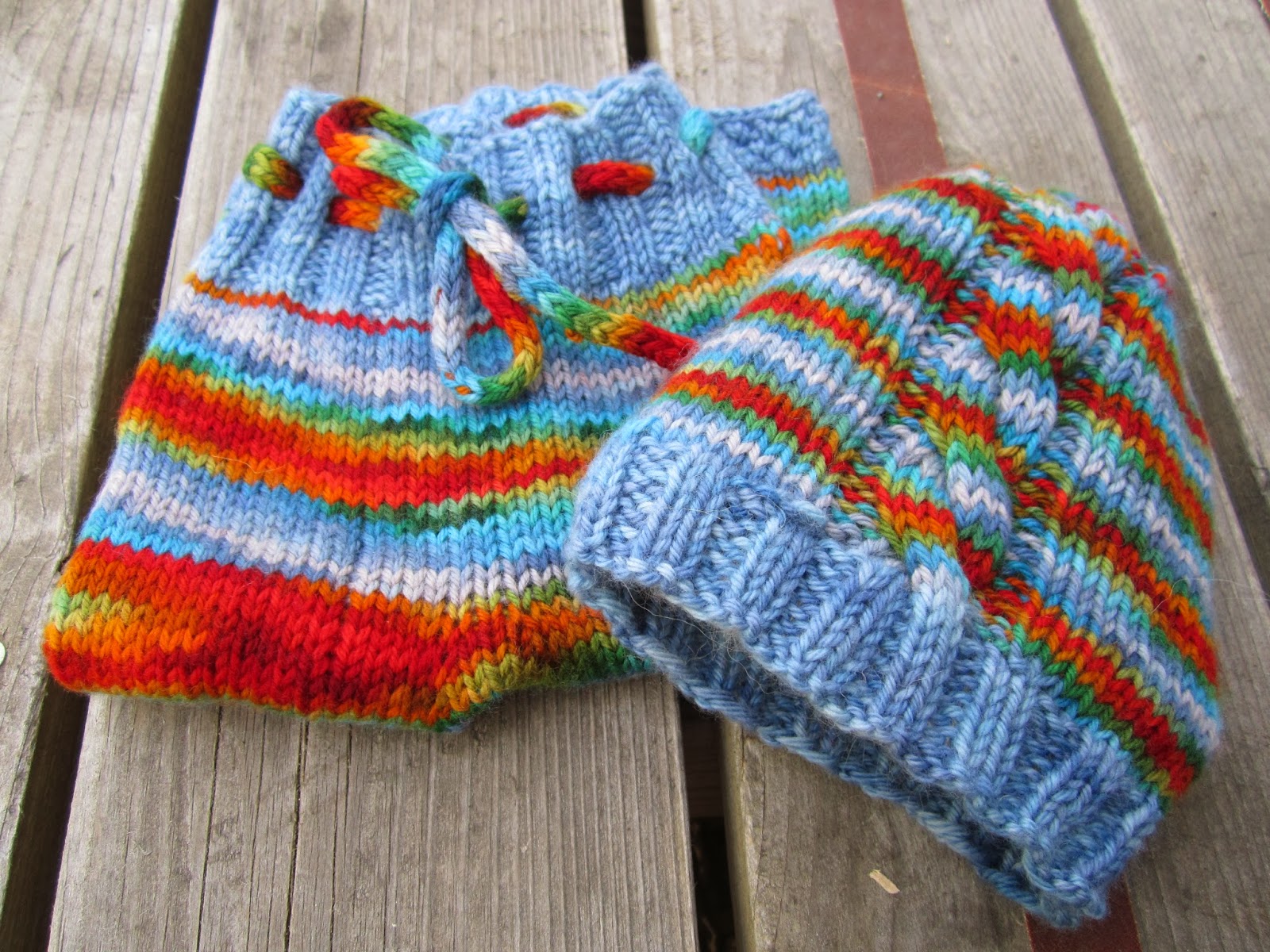 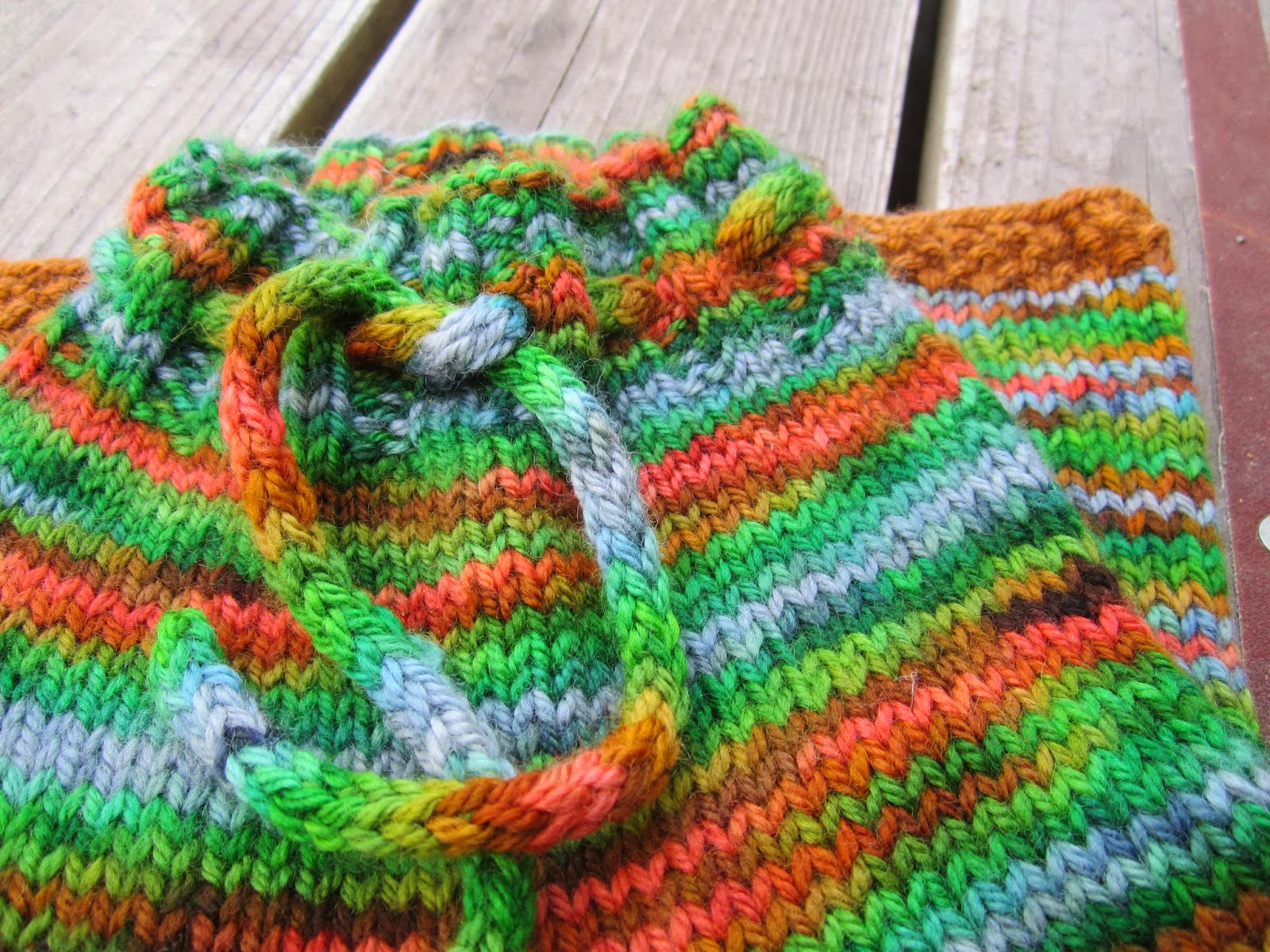 The two hats are just the Blue Sky Baby's First Hat pattern - the green with Blue Sky Bulky and the red hat with Mirasol Sulka yarn - allll yarn from my stash, so another score!  Clearly, the red hat is meant for months down the road, so, I hope the timing will be right for the fit, and I DO hope the green hat will fit right away, though it IS quite bulky (so, will it be COZY???).  This pattern is honestly an easy fall-back pattern.  I like the ribbing and garter brim - super simple and EASY to modify from baby through adult. 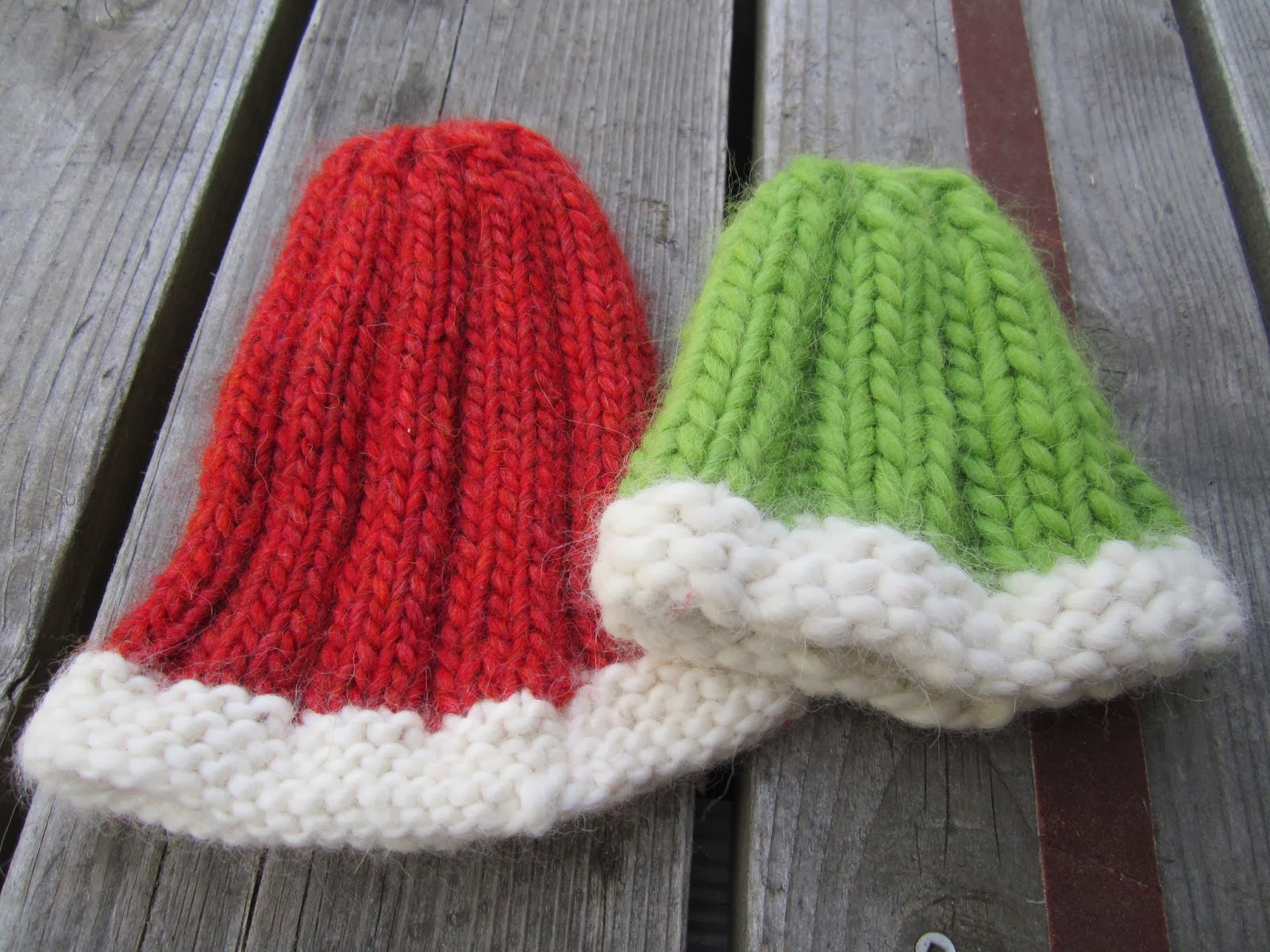 Lastly, I used the Puerperium Cardigan pattern by Kelly Brooker (also FREE in the newborn size!).  I mostly did it because it was free.  The pattern itself is simple, easy to follow, etc.  I'm not in LOVE with the yarn choice, but I was being GOOD (read: poor!) and using yarn from my stash.  It's Blue Sky Alpaca Melange, which is fuzzy and such.  It'll work, but I do wish I'd had enough DK yardage in another colorway/yarn.  The part I AM excited about is the buttons!!!!!  Aren't they most beautiful???   They're Tessa Ann Designs, the Organic set - which I chose because it was rather gender neutral and fit with the yarn color/design of the sweater.  I die at their cuteness.  This is clearly the baby's first sweater, and the baby will also get to wear Camden's first sweater. 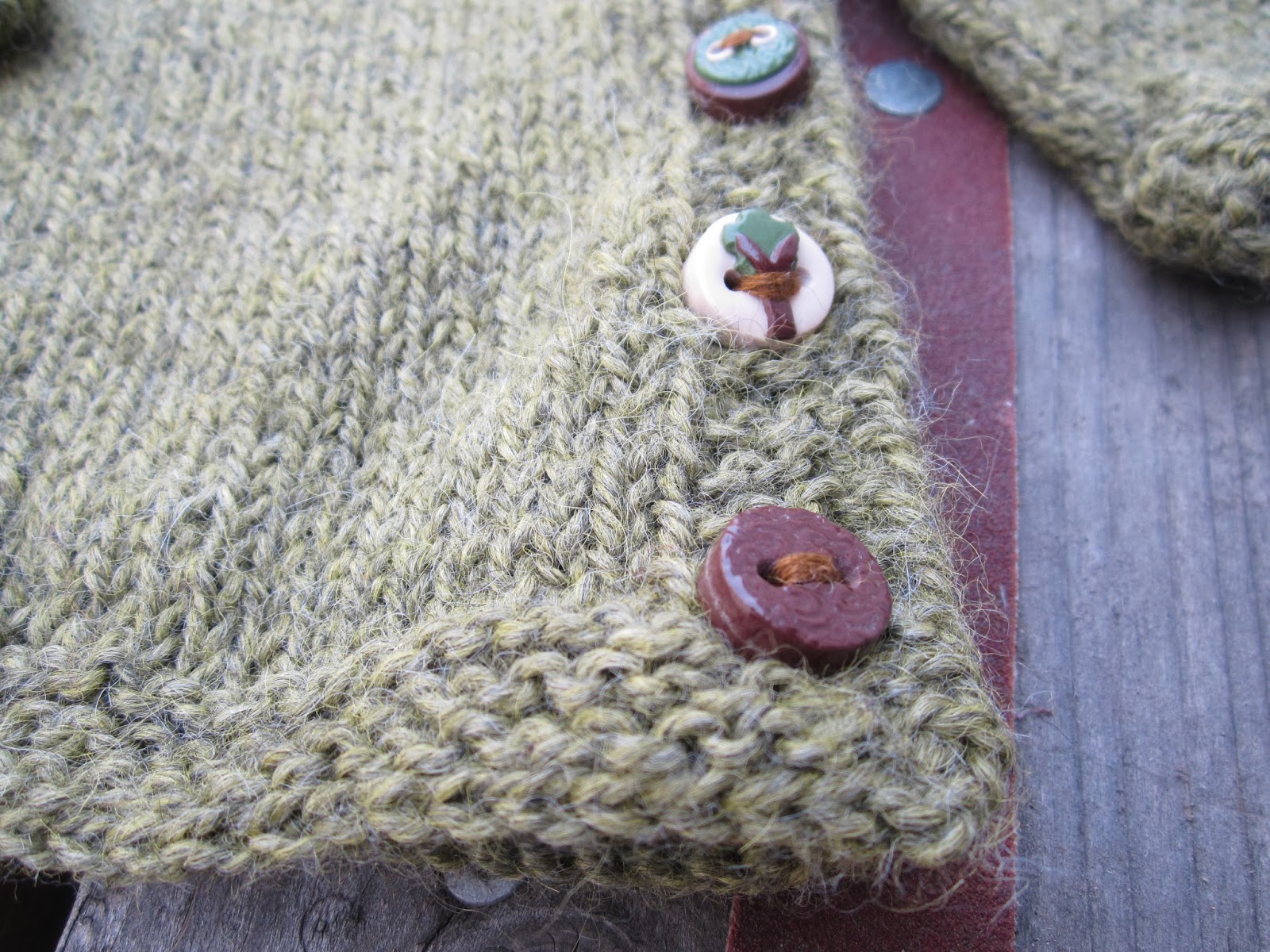 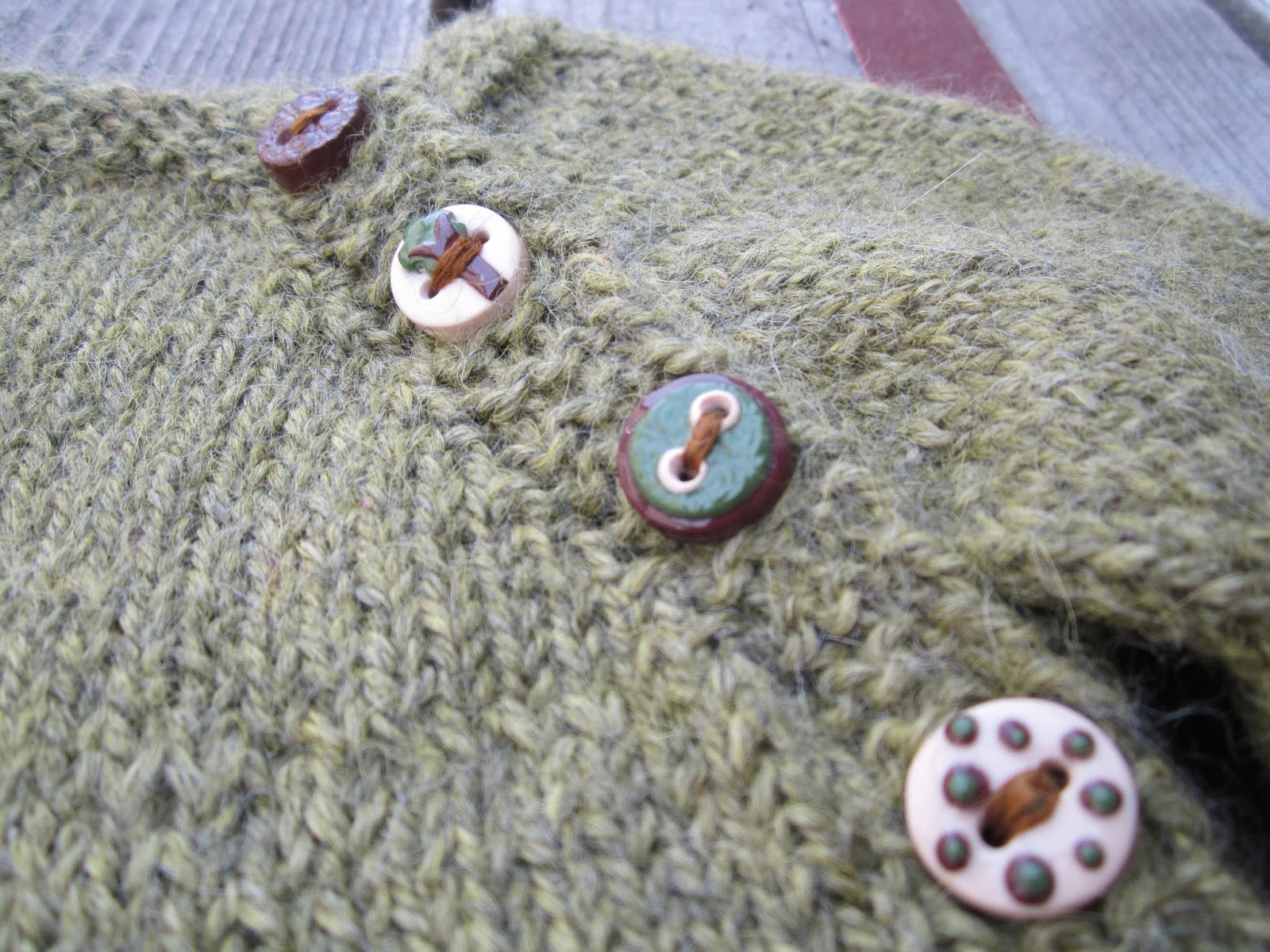 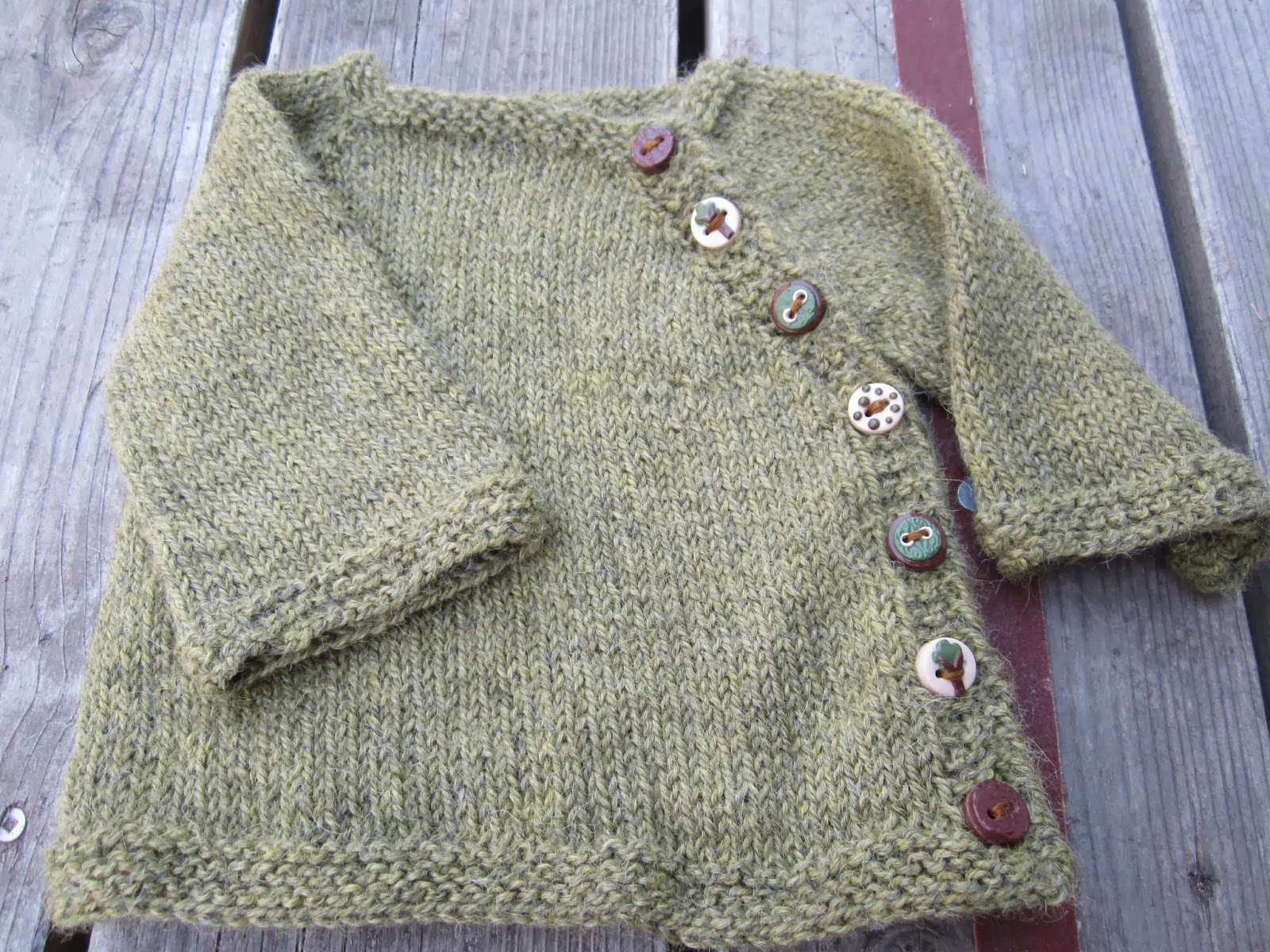 As for knitting in general, I hope to finish a sweater vest for Camden by tomorrow night, which will be her last for quite some time.  As for sewing, I hope to sew a TON from Friday through Wednesday, when Matt is out of town on a ski trip!!!  Those'll all be projects for Camden, so, we'll see what I can get through  :O

Posted by cottington at 5:24 PM