This could very well be my last blog post as a mother of one...OUTSIDE of the uterus!  Dare I hope that it stays that way for a few more days????  I've been sewing up a storm this weekend, and I'm not yet done.  After some minor details are complete, I will have finished three dresses, a skirt, and a top.  In my wildest dreams, I will also have the chance to trace, cut and sew a couple more patterns, but let's not get hasty, eh?  ;)

All that aside, though...knitting is the point of this post!  Which project, you say?  Why, I did a KAL of sorts with a friend, Terri - the Modern Pixie by Elena Nodel.  I've been in suspense to share this sweater, and I chose the ONE insanely WINDY day on which to take pictures, so, take care to ignore Camden's windswept look.


The pattern itself is SOOOO easy/such a basic, in terms of straight-up stockinette, but it has such a cool look about it.  Camden loves this sweater, and I don't know if wee Amelia does, but she should - hers looks awesome!  I'm glad we each went with a different striping method, so, it gives you the chance to see a couple versions.  My ONLY issue is that I honestly suck at striping.  I carried the yarn in this sweater, and it wouldn't have mattered if I'd NOT carried it.  End-weaving also leaves an un-pretty look for me.  If anyone knows of a better way to carry yarn and NOT have an ugly "seam" of sorts, let me know!  Terri apparently works magic, as hers is great.  I suppose you can't really tell in the pictures I chose to put up, but I promise the funny look is there.  Also, in the sweater link, you can see there is a belt option, but I chose not to add that, as it wouldn't look right, in my opinion. 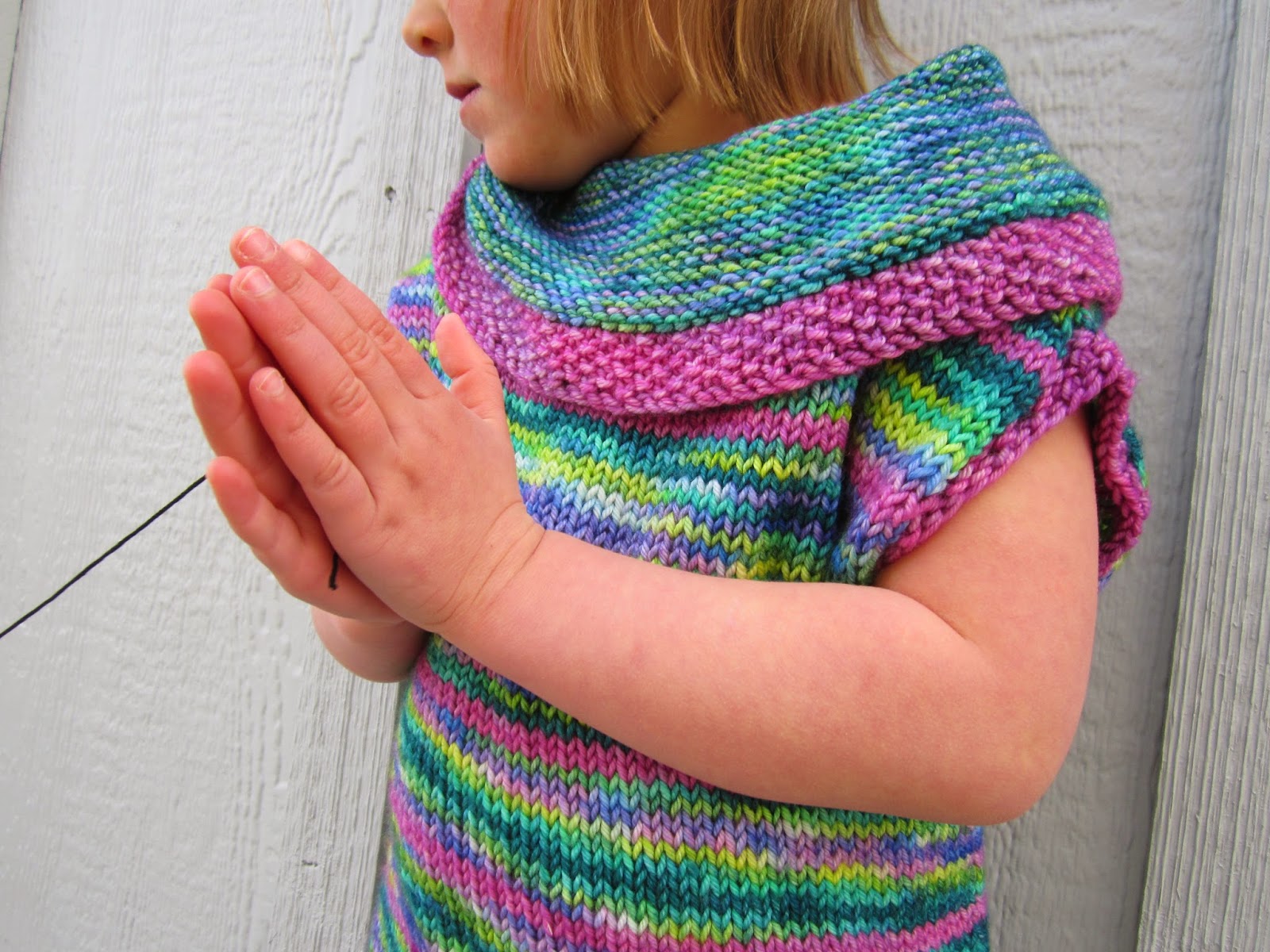 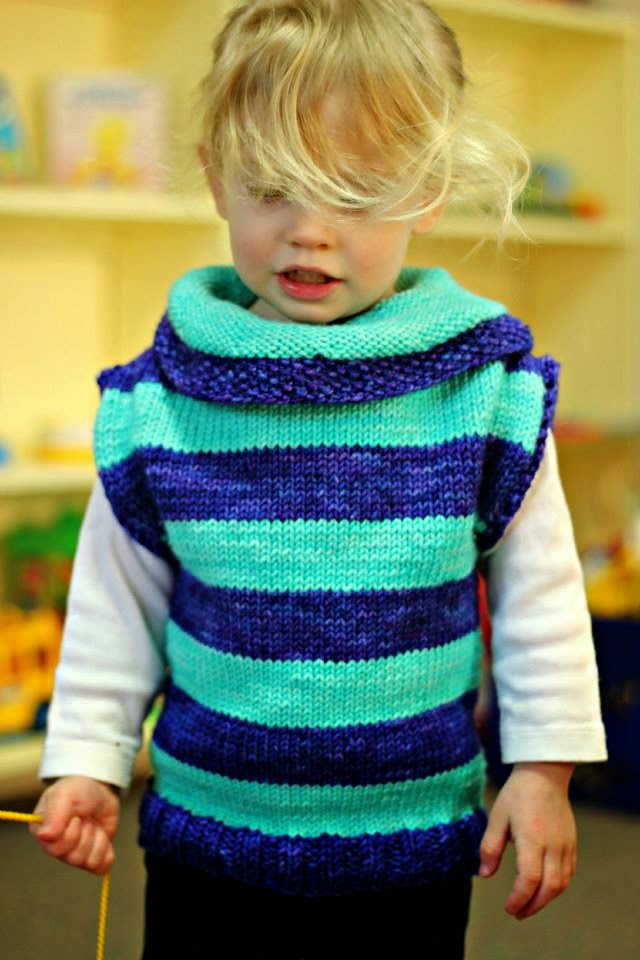 For Camden's sweater, I used Colour Adventures Little Mermaids and Bleeding Heart colorways (list/pictures of colors HERE), and the yarn is fantastic.  Naturally, I had to go down a needle size, because I am a loose knitter - and I honestly think going down two needle sizes IS smarter (this is per an Elena sweater I just finished, by the way - more on that another day!), as with blocking, I think I'd be more on gauge.  (The smart person would just start wet-blocking...and I definitely plan to do that when I knit my OWN sweaters!)  The yarn was delightful, as always with CA yarns.  I have quite the stock pile of CA yarns to work through, actually ;) 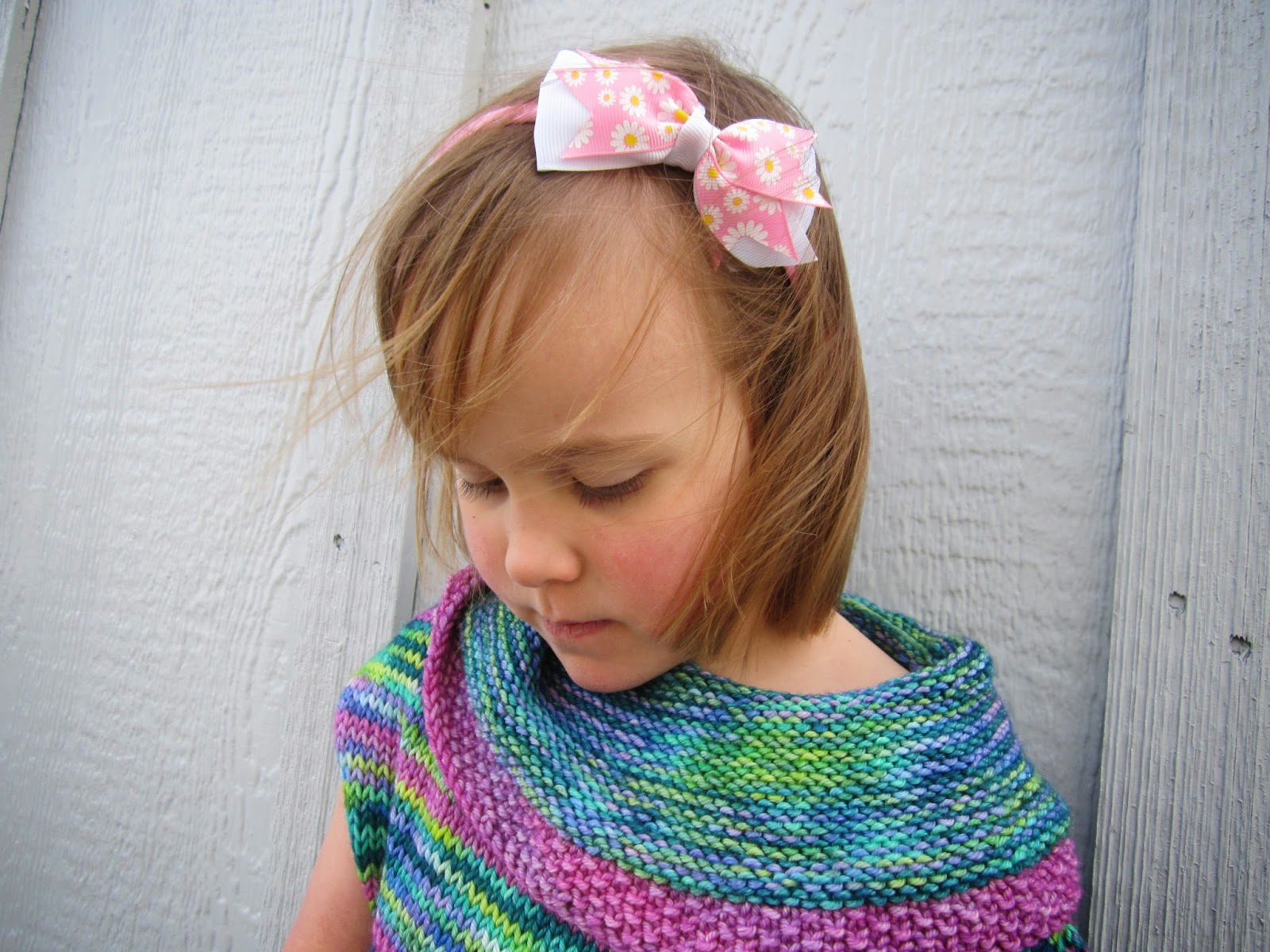 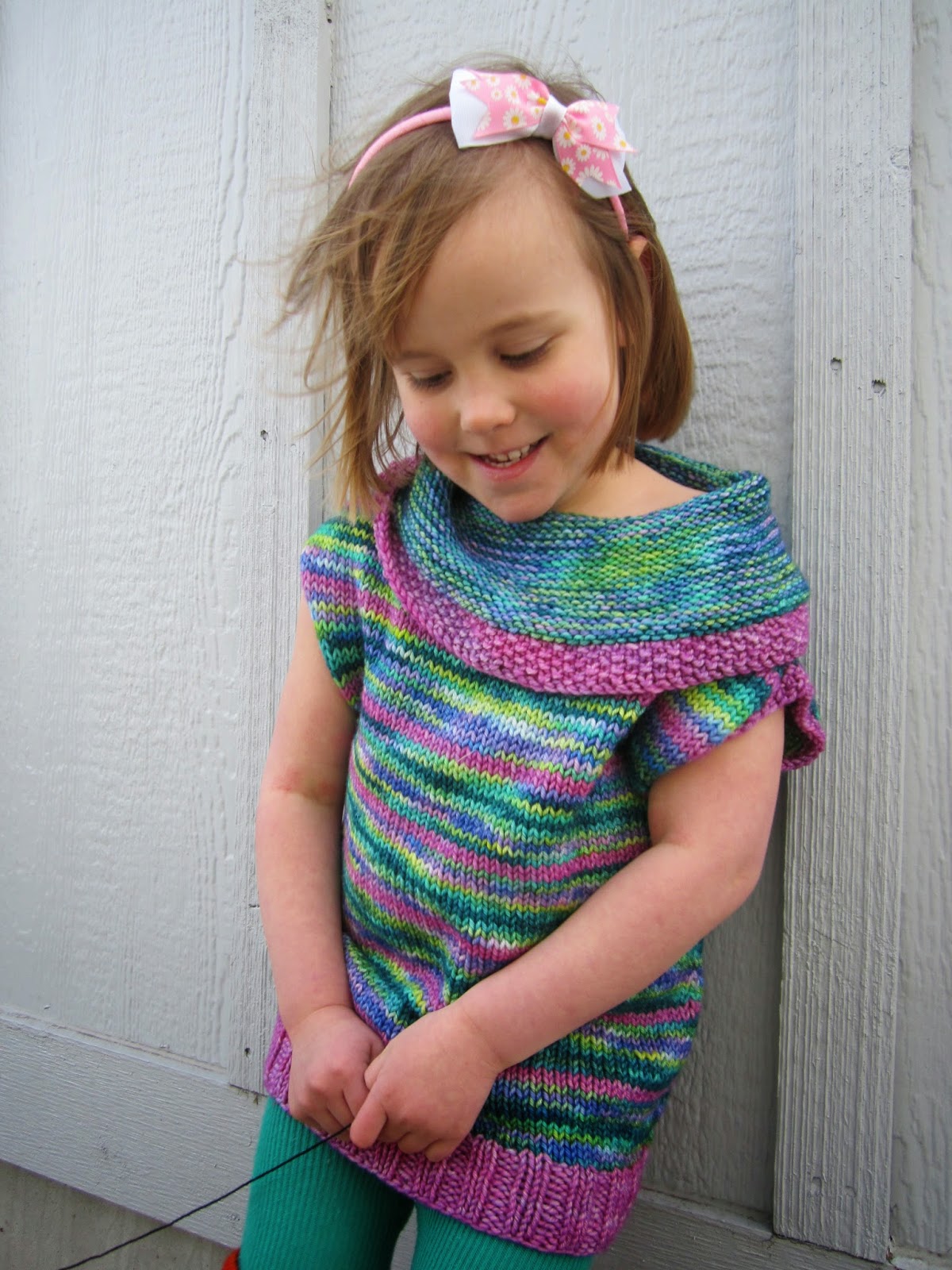 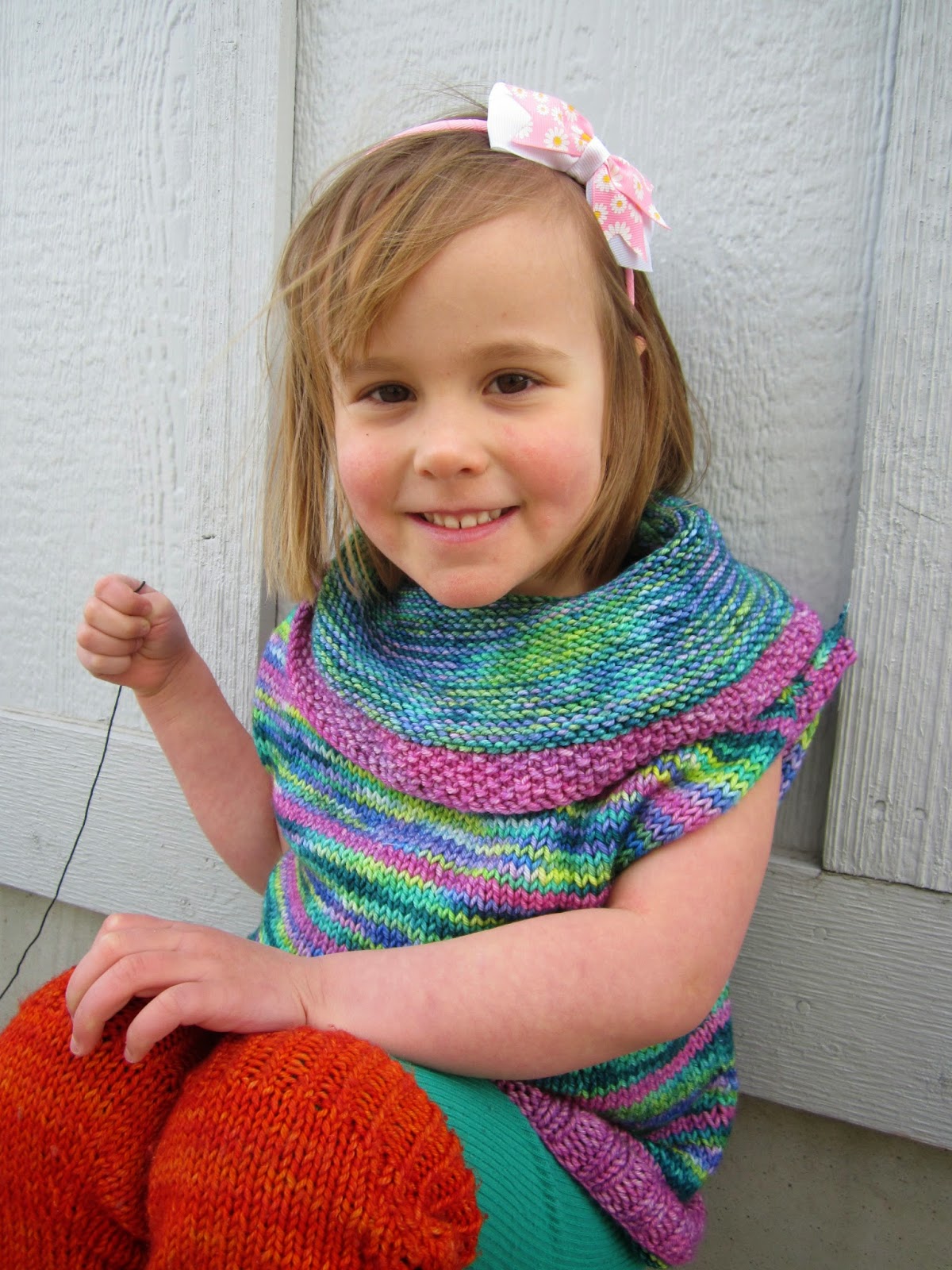 Terri used Madelinetosh Tosh Chunky, which I've heard is awesome possum yarn but haven't yet used.  She used the colorways Vishnu and Button Jar Blue, which look super great together.  She also had no issues with the pattern, and it's lovely on Amelia. 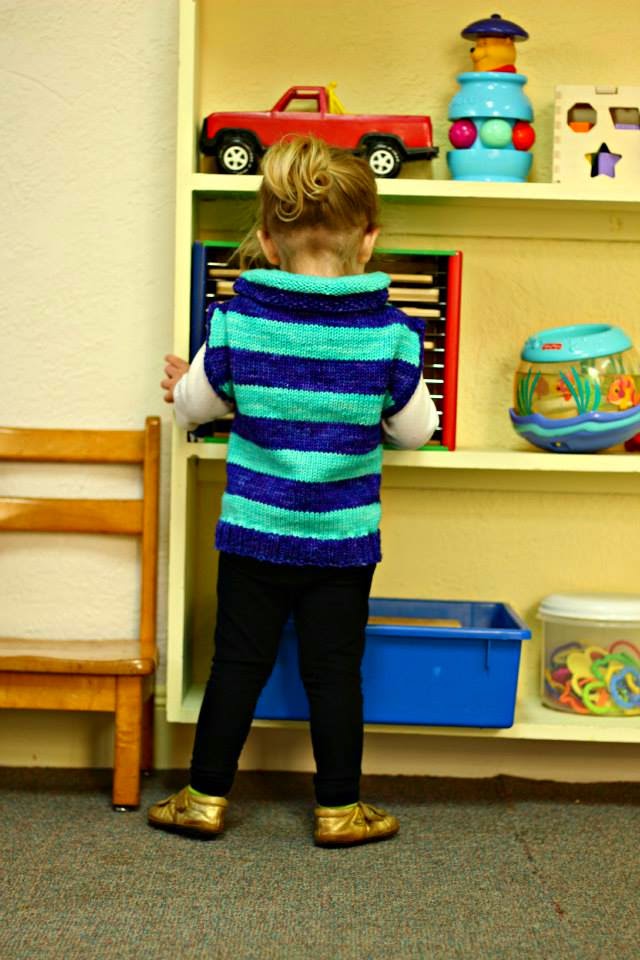 The mean wall hurt Camden's hand a few minutes into the photo shoot, so, she went from silly to sad; thank goodness her dad was there to give kisses. 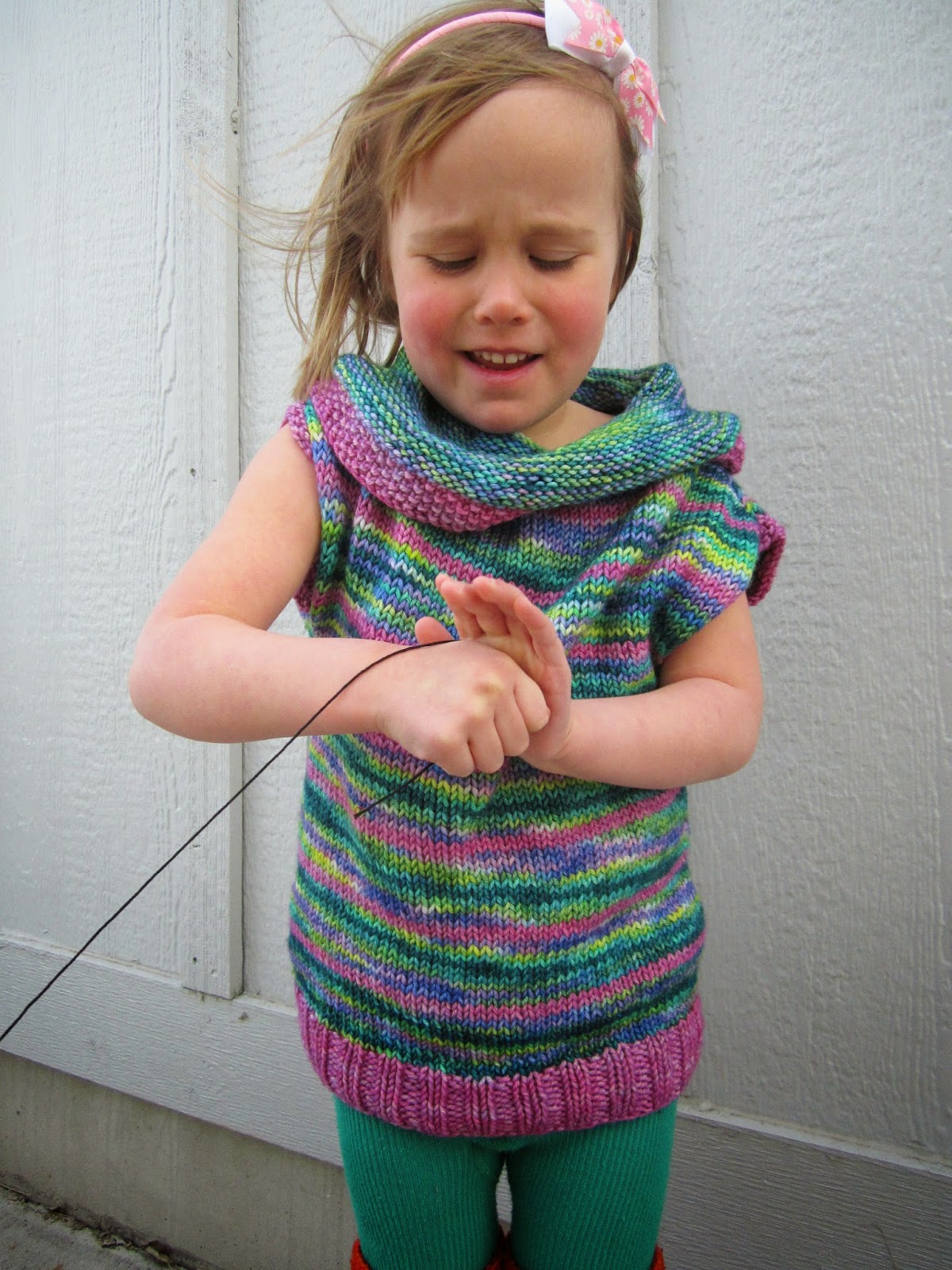 The unknown count-down to el bebe's appearance continues....But here is one last shot of the big sister!

Posted by cottington at 6:19 AM