Zonen Jacob Pants - What I Call an Awesome Outfit....Half Completed

Naturally....I super LOVE these pants - soooo few pattern pieces, in my humble opinion (which, for realz...is probably foremost in my mind, as I traced two dress patterns today, where I felt there were a hundred pieces), simple construction - and great fit! 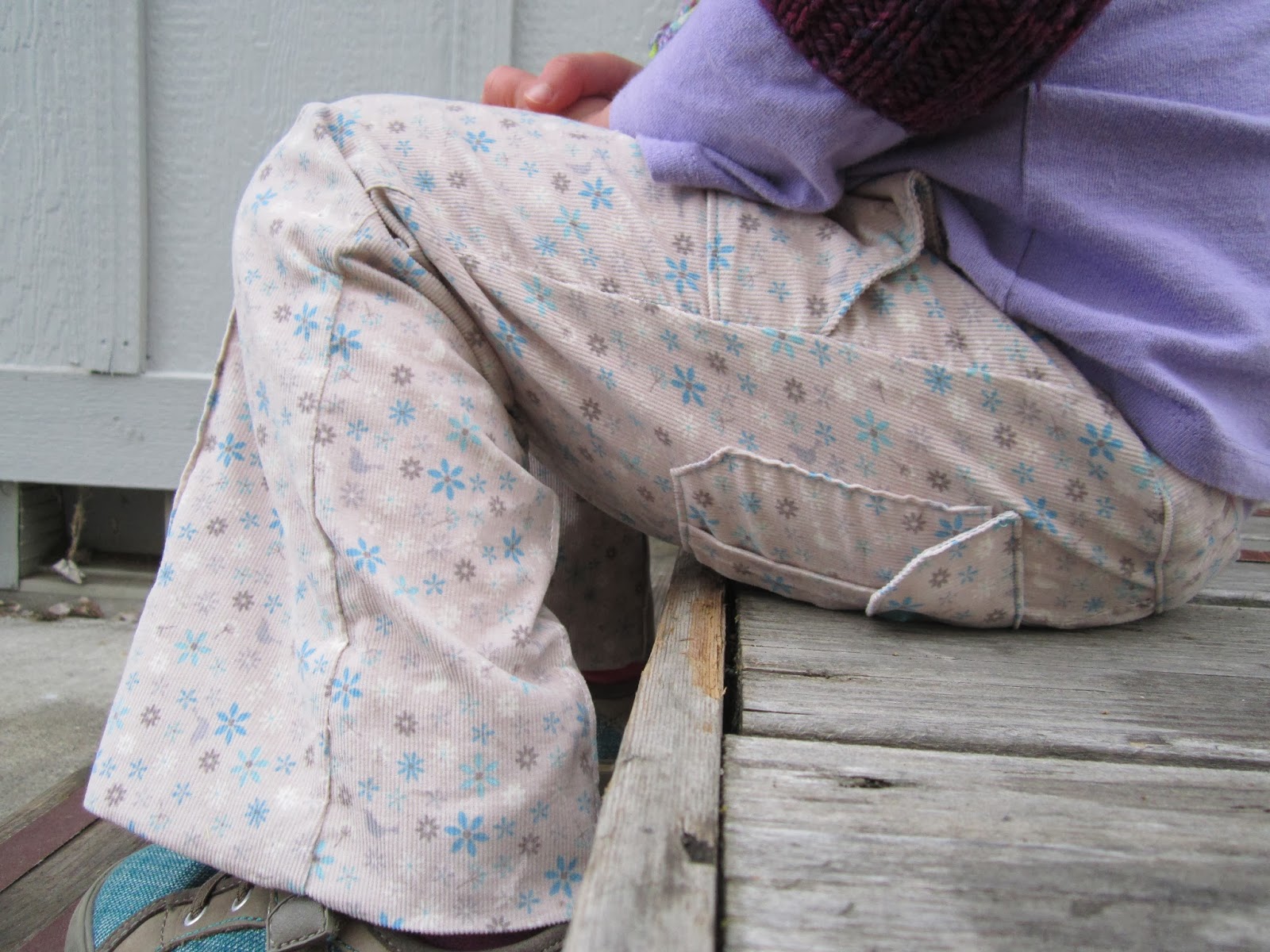 But...since we're speaking of fit, if I was what SOME might call an UNlazy person, I would make them an even better fit by taking them in at the front/shortening the waist.  With zeeee belly, Camden often has bunching with pants, as they don't have enough room to rise, LOL.  They do seem to come just over the crack of the bum, but that works for her, as she has no bum to speak off, so, excess fabric up there isn't helpful.  I wasn't able to get a super great shot of the front, and for the umpteenth time, I made my wee girl stand outside in the brrrr chilly air for pictures.  No joke - what's the deal, Bend???  It was WINDY, snowy, rainy, sunny and who knows what today.  It might be snowing again, but I'm cozy on the couch and can't be bothered to check. 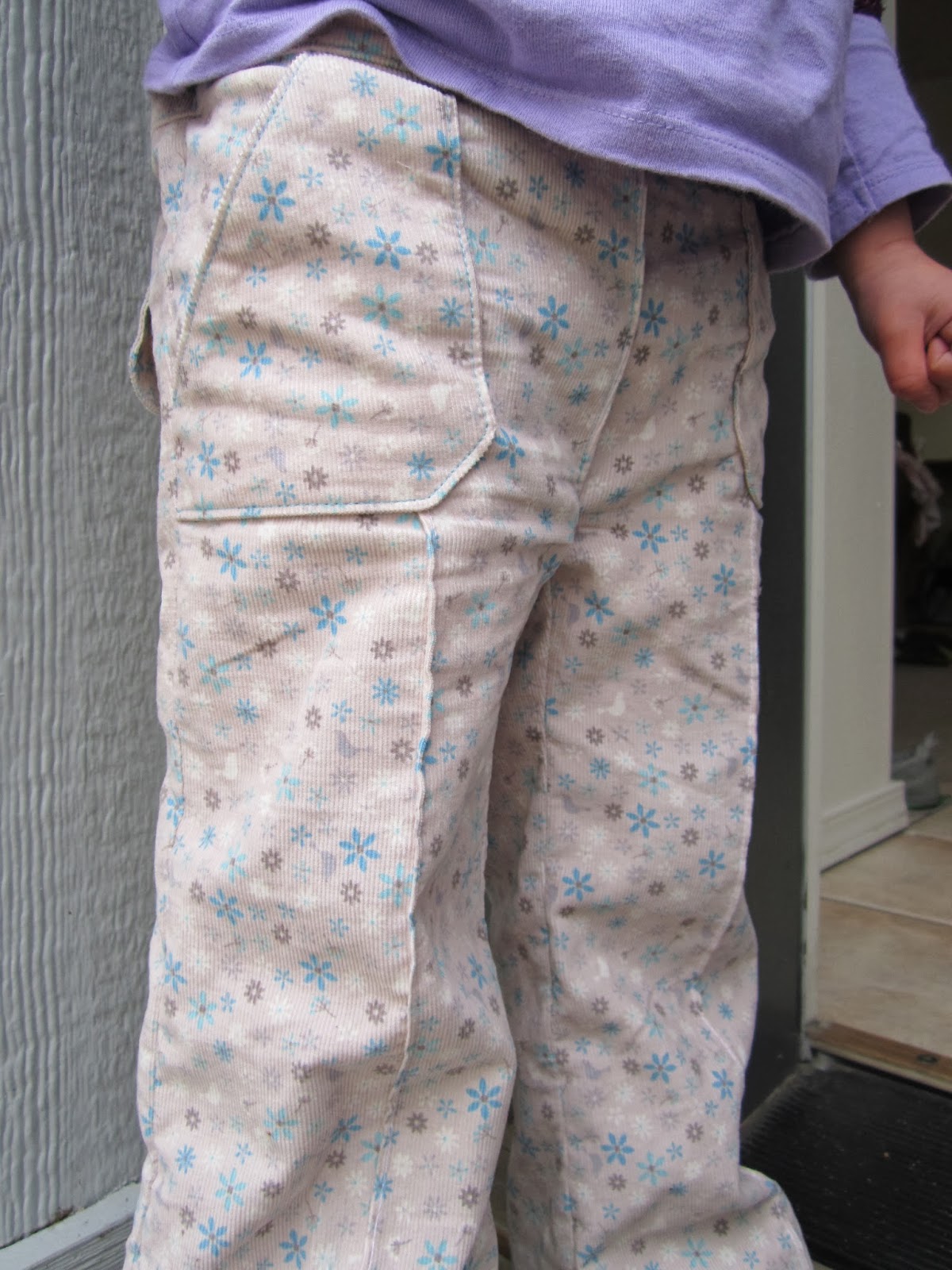 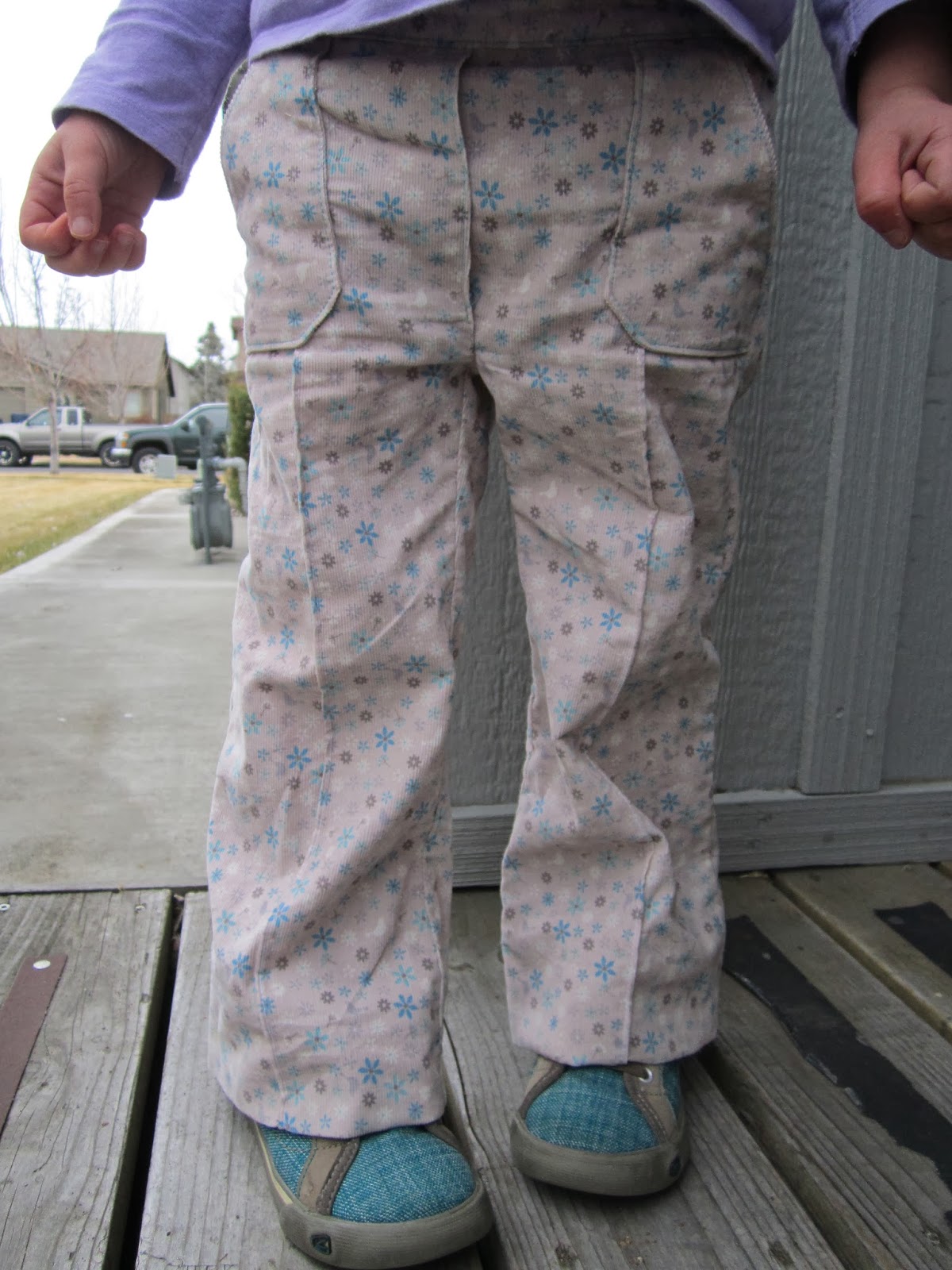 The Jacob pants pattern by Zonen can be styled in soooo many ways, I think!  I chose this lovely snowflake corduroy from my stash that I'd been saving for the perfect project - yay!  I also chose fabric just for these pants when I was able to shop for deals back in October, and it's a great red-orange (tell me THIS pattern wouldn't be GREAT in red-orange??!!).  The Jacob pants definitely have that 70s vibe and can go totally casual or be dressed up a bit, depending on your choice of top... 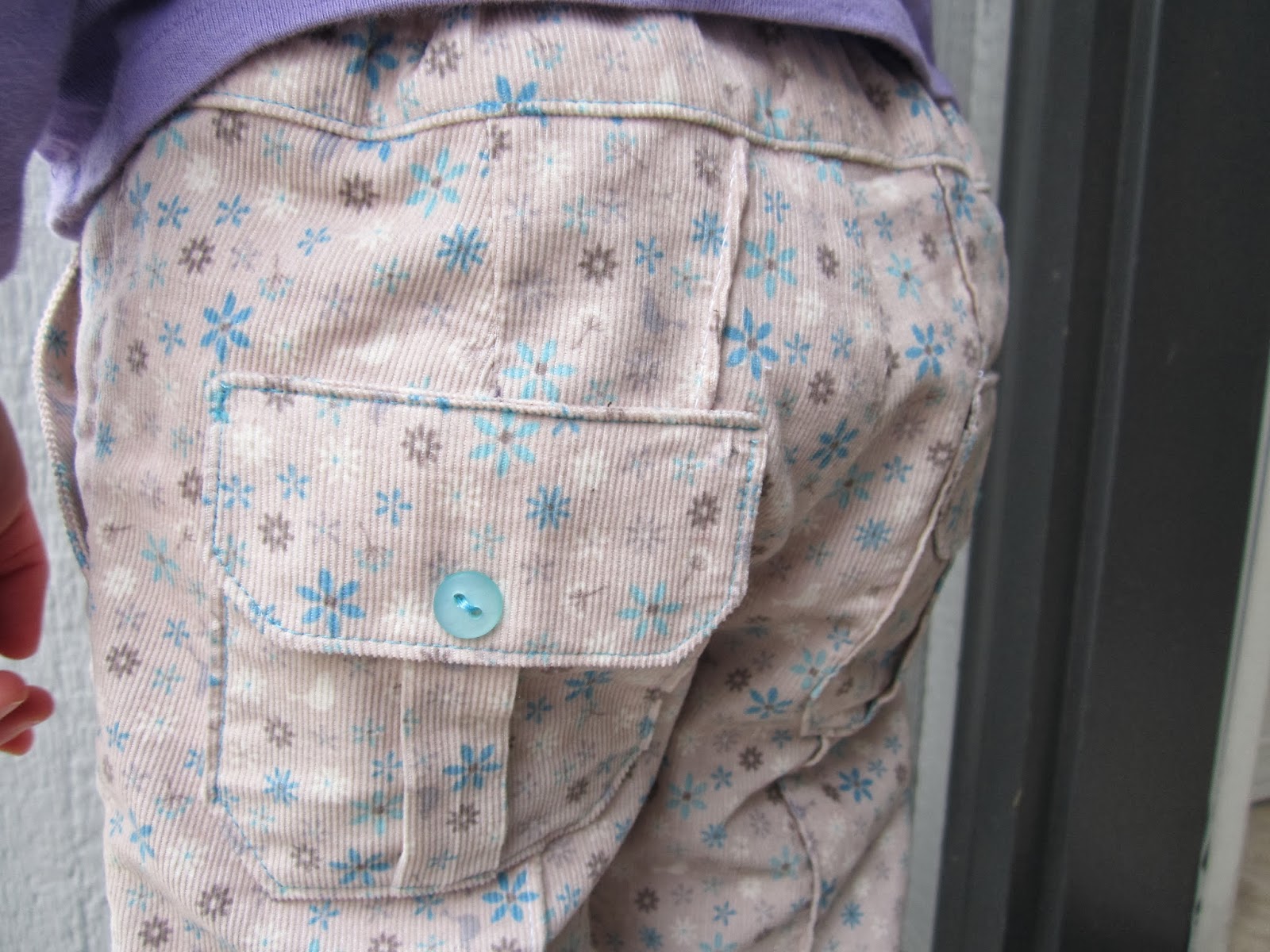 ....which is where my great FIRST WORLD SADNESS of the day comes in.  I almost didn't want to photograph the pants and post about them, as the ensemble is technically incomplete.  I had grand plans to complete the Bloomsbury sweater for the outfit, in a gorgeous blue colorway by Colour Adventures. Time, however, got the the best of me (read:  I don't know what I was thinking...I knit about one sweater a month, no faster, really), and I unhappily won't be able to knit the Bloomsbury until a few months from now, if not the fall, as I have work to do for the baby due in March.  Anyhow....enough about my slow knitter problems, as the sweater will eventually happen...which leads me to the next thing... 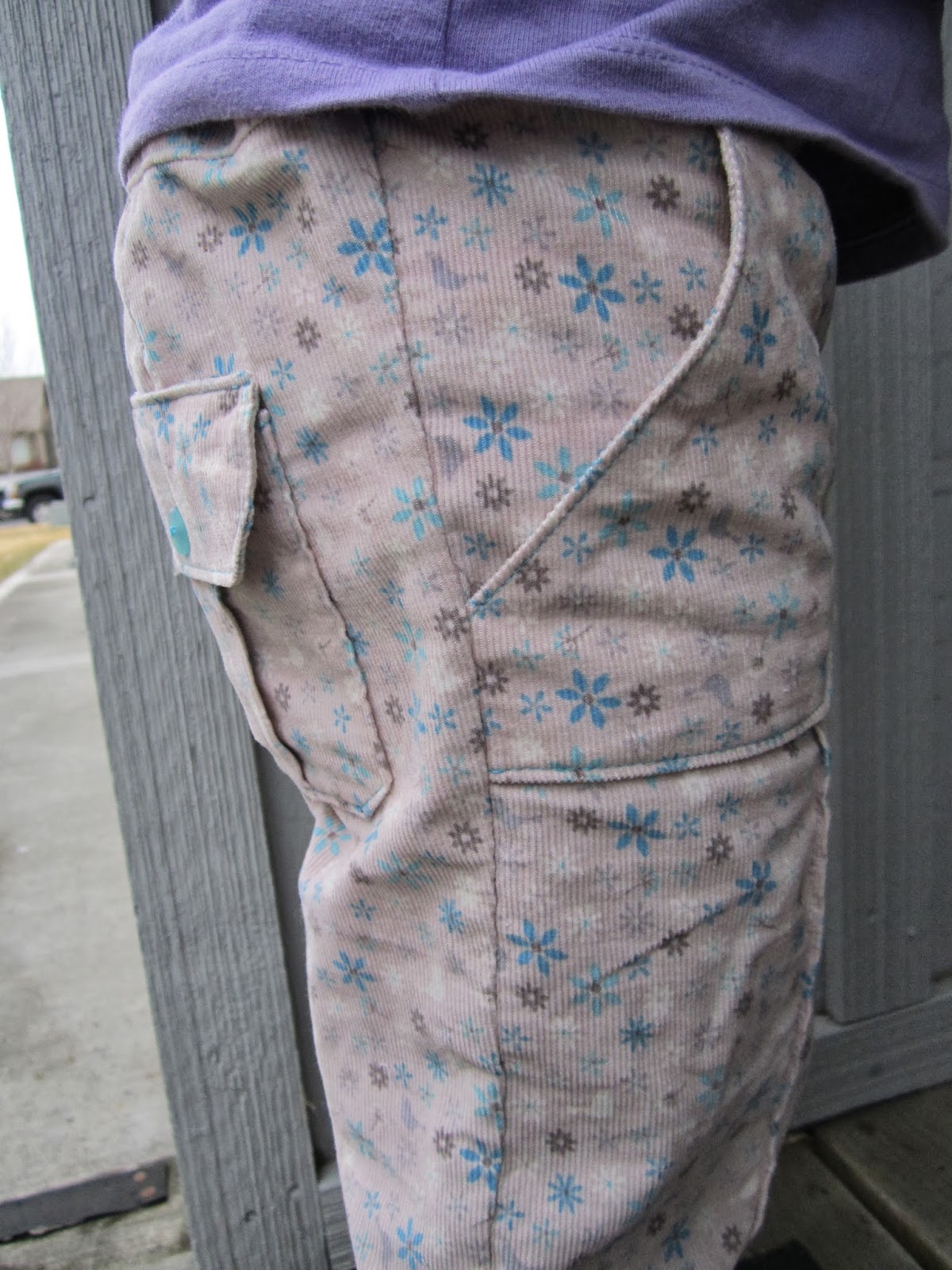 The pants ARE on the longer side for Camden, and, as with the last couple pairs of pants I sewed her, I hemmed at the regular hem, and then took them up an additional 2.5 inches, which might be a hair short for her, but I'll let them out again in a month, I suspect.  Because of the design, however, I had to do a shoddy job of taking them up - the bottom is wider than the leg, and I basically sort of tacked them up at four different points - which is hopefully not too obvious from the outside - rather than hand stitch them up all the way around.  With this extra length, though, Bloomsbury should work well in the fall.

All this to say that I clearly do NOT plan on styling Camden in the Silversage shrug you see in the pictures, because, though lovely, it doesn't work so well with the pants, LOL.  (Note:  Snay-up!!!  She is tooo big for that sweater now!) 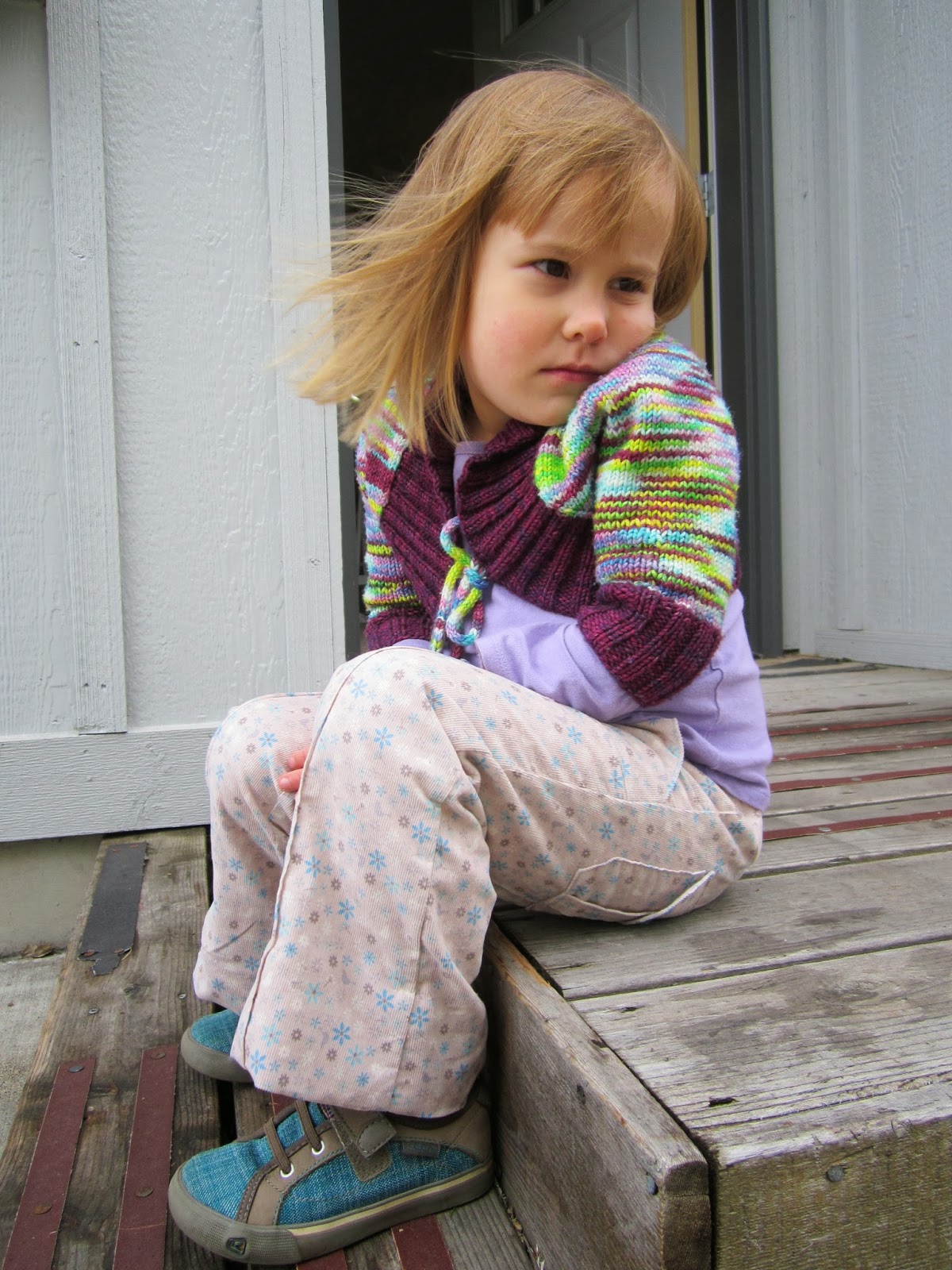 Overall, the pattern was great.  I did read the pattern in English, and I found that I didn't love, perhaps, how it was set up - maybe too much scrolling around to find where I wanted to be?  I can't quite pin my finger on it, though it WAS easy to understand.  Two more thoughts:  I lined the front pockets, as it's just plain silly to me to NOT line a front pocket, though the pattern doesn't call for it.  And...I did the faux fly, though I ended up stitching part of it down and should just have stitched the whole thing down, as it's gappy on her because of the bunching, though I see this as no fault of the pattern, of course.

Also, how cool would these pants be if you added belt loops and a belt???!
Posted by cottington at 8:10 PM