Nine hundred woven ends later, and here we all are.  I'm PRETTY SURE I will NEVER do another scrappy sweater/dress/tunic EVER again, thankyouverymuch.  For serious.

Like...Dead Serious.  My end-weaving was atrocious, and you'll see that in at least one picture, below, but let me move past that for un momento. 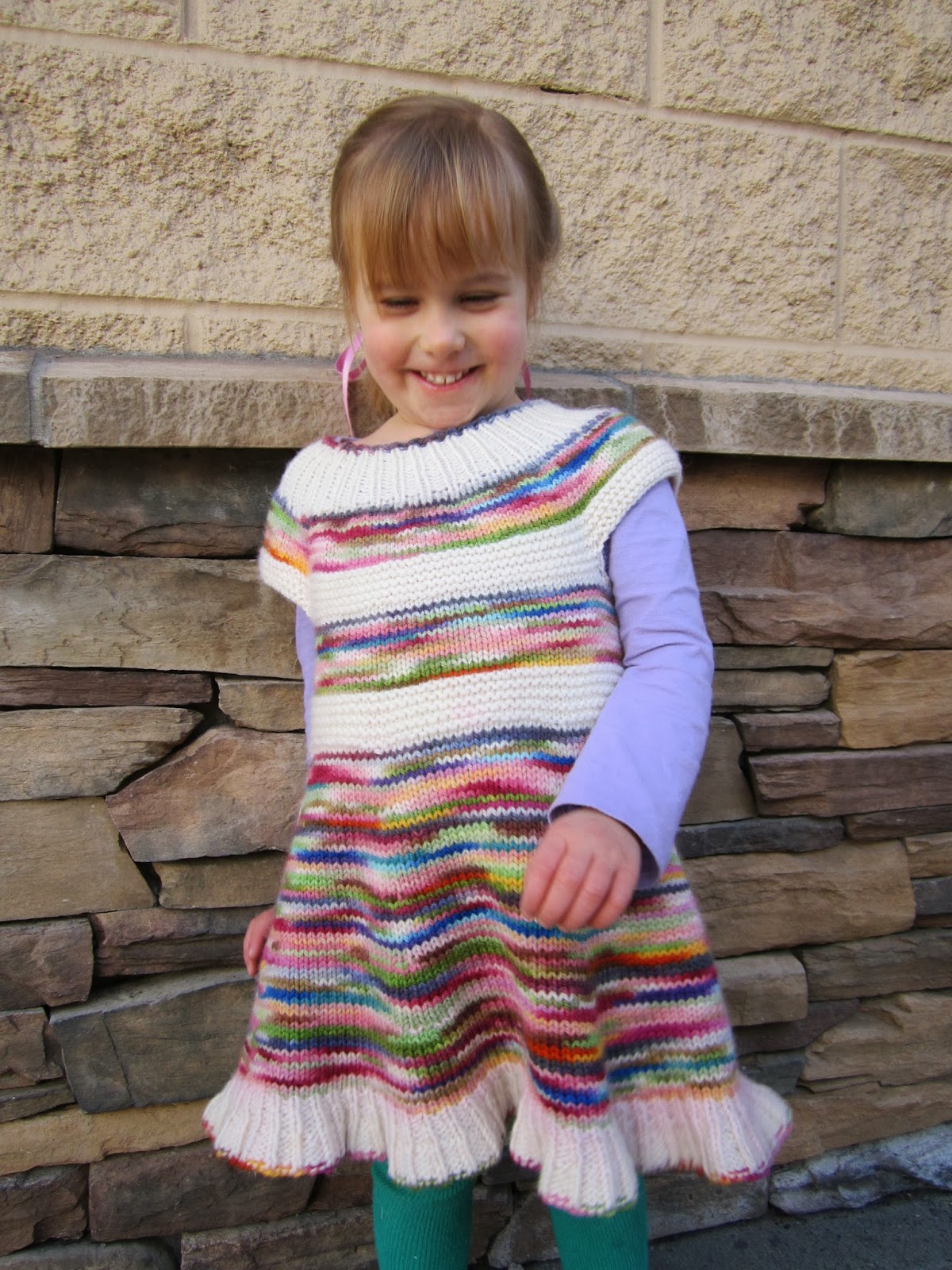 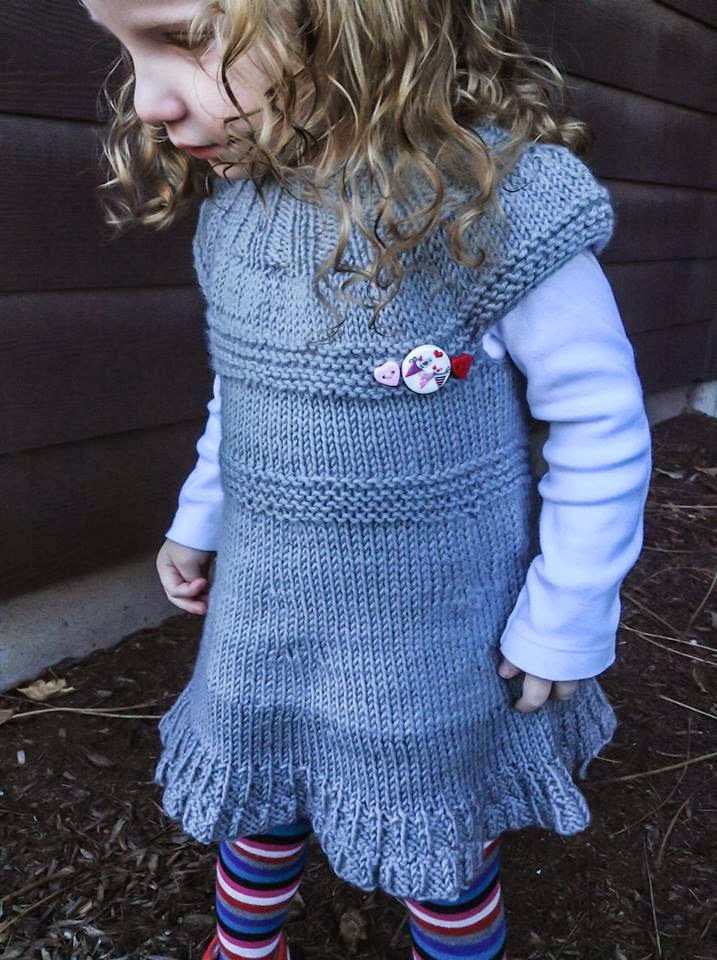 I did a mini-KAL of sorts with a friend of mine, Tessa from Tessa Ann Designs.  This was her second-ever sweater she made her little girl, and it looks super fabulous, if I do say so myself!  She received a lovely gray colorway (Cascade Yarns) for Christmas, and she added some gorgeous buttons, of which I just may be envious.  Gray is a color I have yet to use for a full project (other than Camden's Color Me Pretty sweater, and it's really such a versatile color - pairing it with fun leggings, as Tessa did, using tops in millions of colors, etc.

I know Tessa is pretty pleased with the results of her knitting, and the fit is great on her toddler, as you can see!  The only issue she came across was the difference in color in the last skein she used - the dye lots matched, but the colors were, as you can see, different.  The one cool thing is that it's gray and has more of an ombre effect, we like to say!  ;) 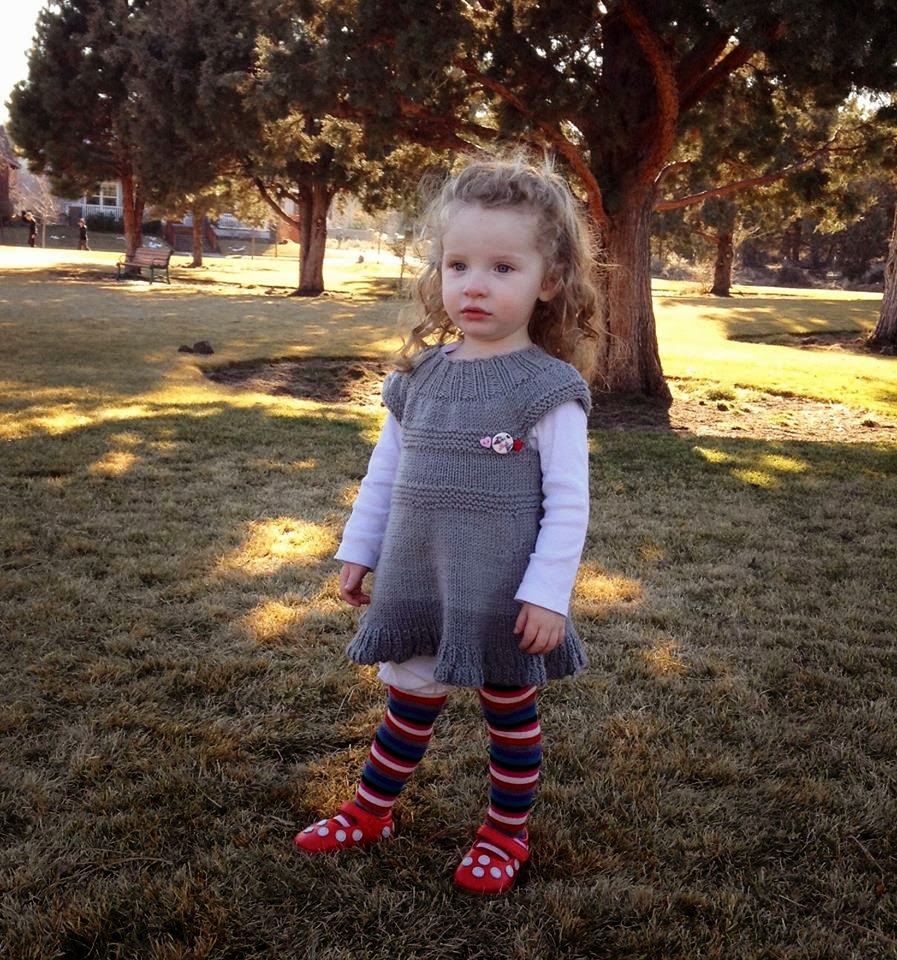 Also, major shout-out to Tessa because I got a head-start by a few days, as I was trying to whip through two sweaters at once.  So, I thank her for understanding when I was feeling pressure from myself in finishing projects before the baby is born (and can I say how awesome it is to have a knitting date with a friend???  Sans children???).

Camden's version was a size 4/5 and is definitely big-ish on her, especially after blocking.  I know she'll grow into it, no biggie.  I did alternate every two rounds, which was NOT cool when it came to finishing the sweater (ie: weaving in the ends).  I do wish I'd gone every three rounds, just to make my life that much easier, but whaddya gonna do?  The thing is, the "seam," so to speak, looks AWFUL.  It's quite obvious to even the un-trained eye, if I'm being frank.  I tried to weave in the ends carefully, but it was too many, and I also had tried to sort of spread the alternating over several stitches down the length of the sweater, but it did NOT help.  I'm greatly saddened by this first-world problem and think of it as an eyesore.  I don't know how others do scrappy style so well, LOL. 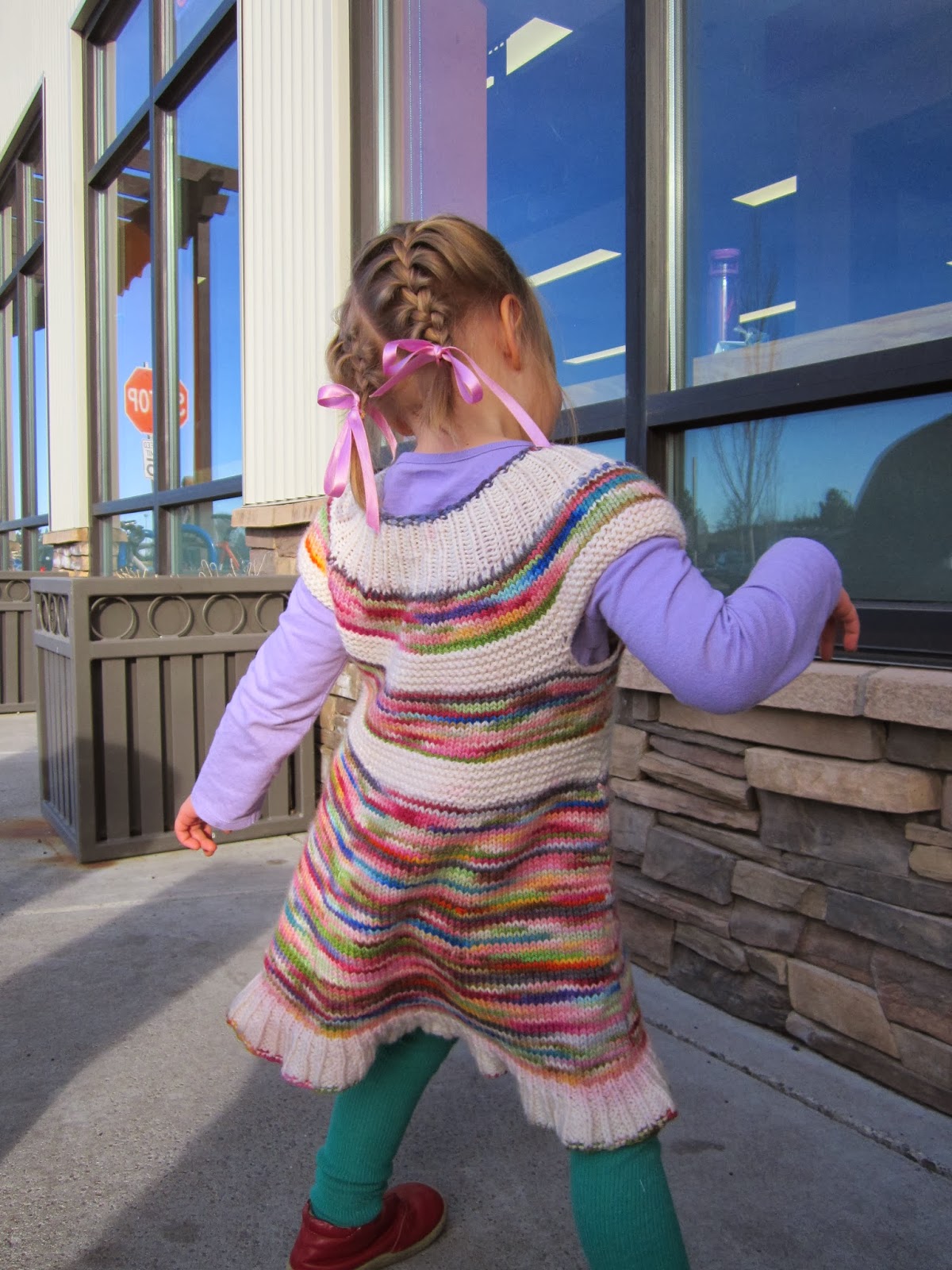 Camden happens to LOVE this tunic, as it turns out, and she did receive a compliment today at the grocery store, aha - so...bonus!

The pattern itself is super easy to follow - though I naturally had some confusion about why the BOR (beginning-of-round) marker was moved.  I didn't see a reason for it, so, I did not do it.  That is the only thing I changed, other than trying to fancy up the sweater by casting on and binding off in colorway, rather than white trim (and let's be honest here:  I only did my bind-off in colorway because I was probably 15-20 inches TOO SHORT on yarn...which I ONLY realized after I'd bound most of it OFF, sadly). 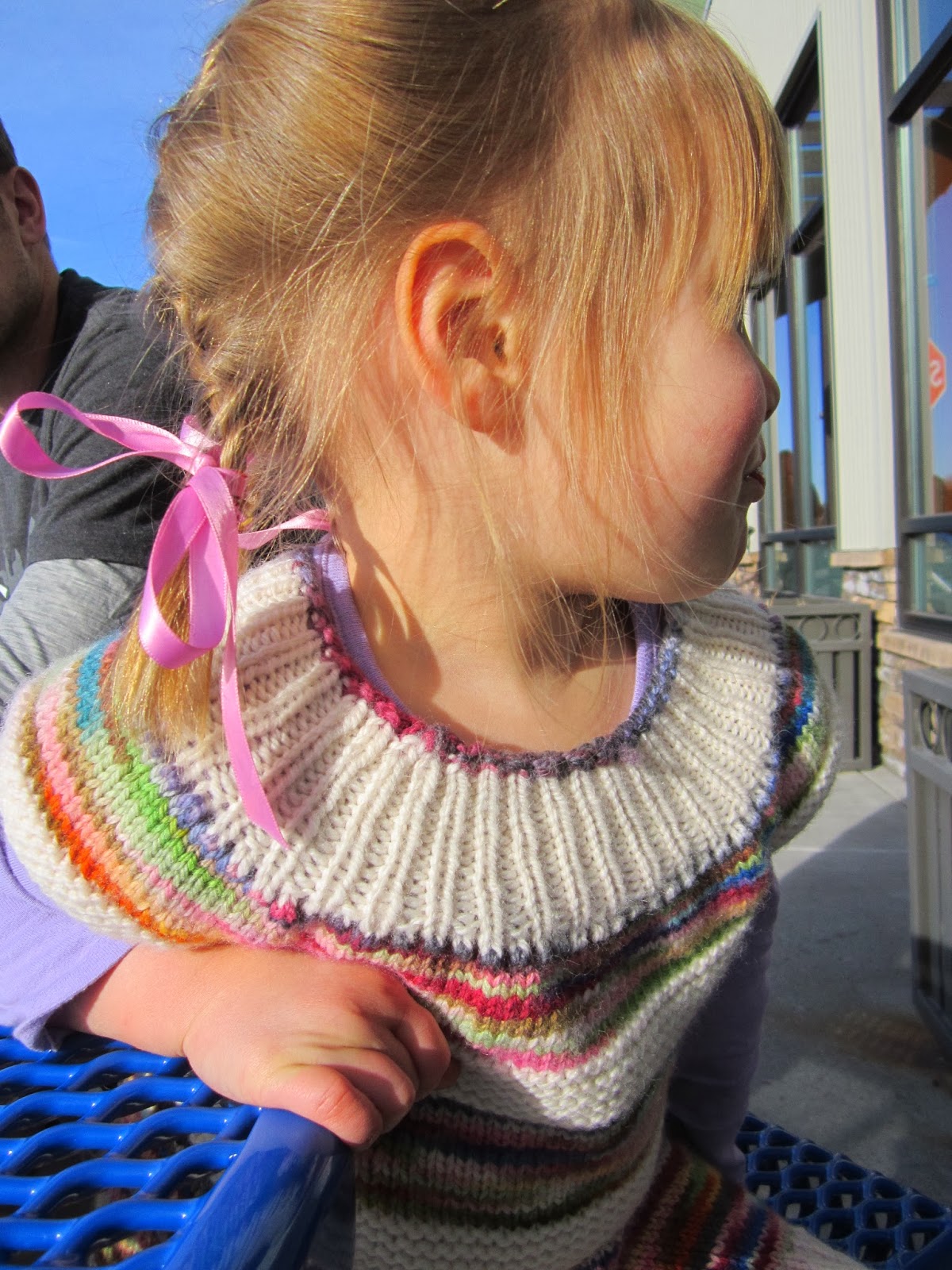 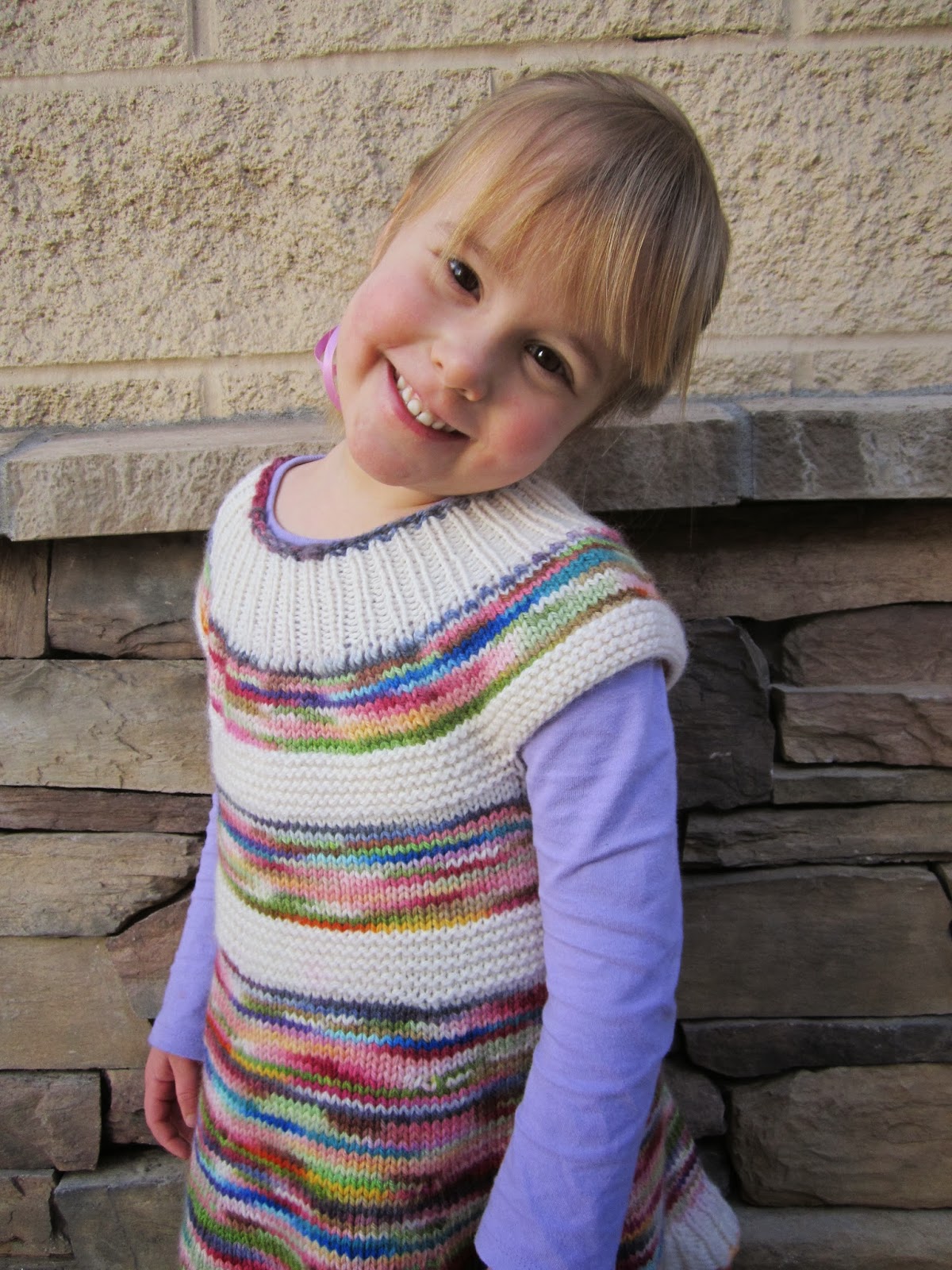 Lastly, when I blocked it, the colorways did bleed a bit onto the white, though it's not super tragic, so, I'm over it.  I used a scrappy set I'd purchased a couple years ago from a dyer I believe is no longer in business.  The colorways are super lovely, and I've used this dyer's yarn before for Camden's Hudson hat. 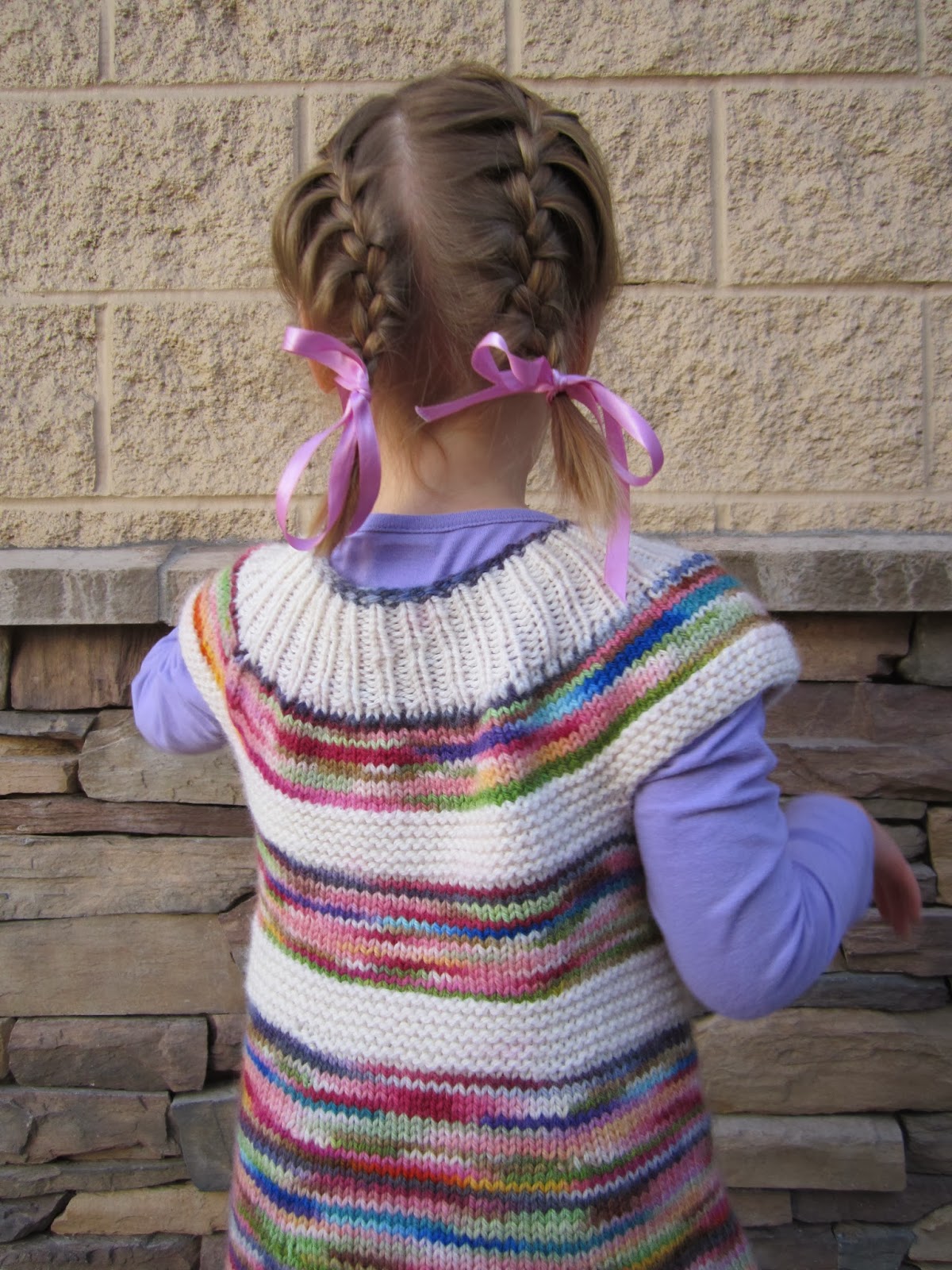 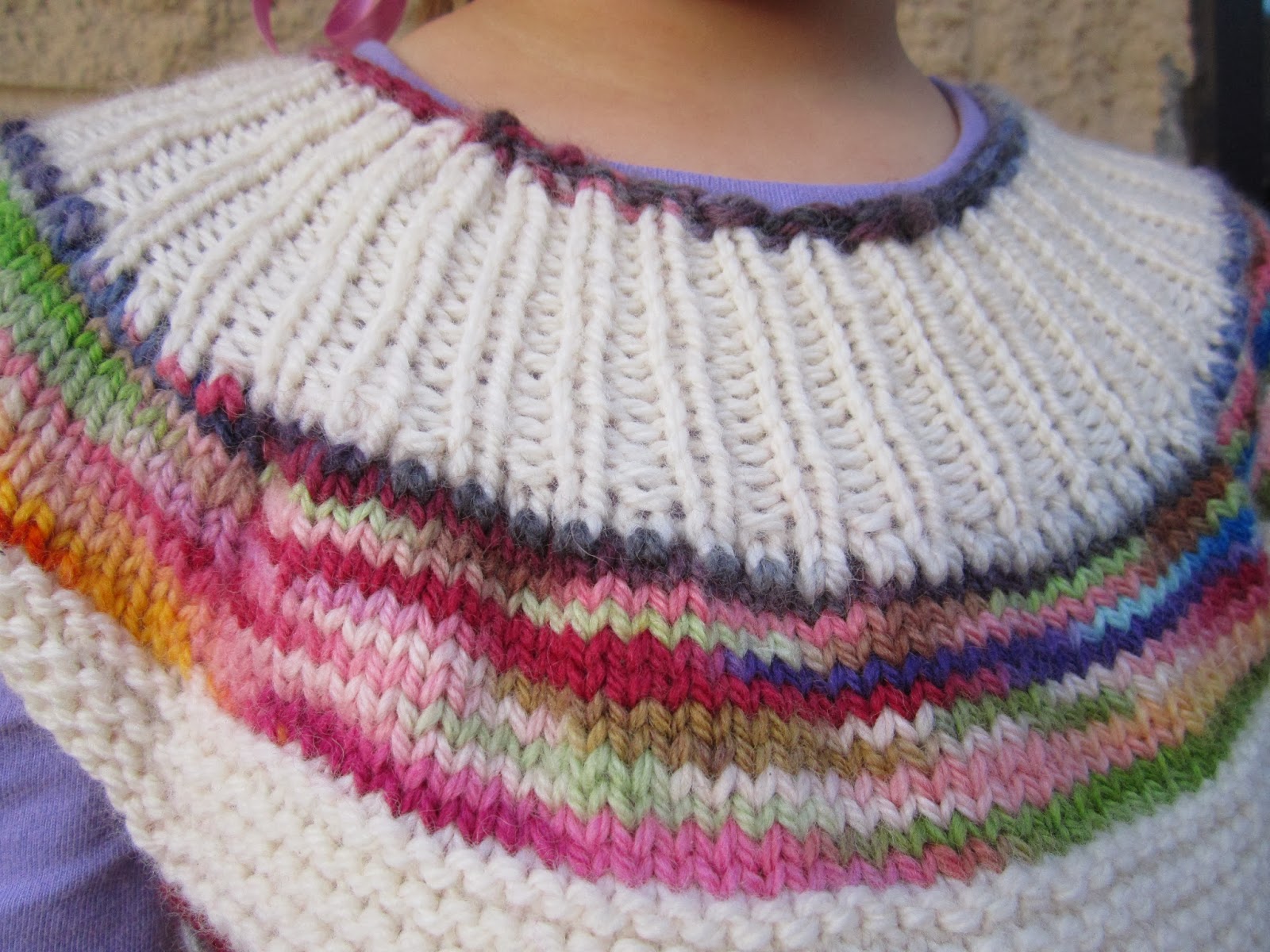 Overall, the Maxi is a great pattern - you can switch things up by going tunic or dress length, straight hem or ruffled...and it clearly works super well in all solids or colorway/trim form.

Posted by cottington at 8:24 PM