Two Hats for the Family! Can You Fathom One is for ME? 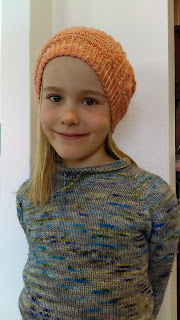 Indeed, folks, I have knit myself a hat - for the first time in six years, I believe...something close, anyway!  As you see, of course, it's photographed on Camden; I couldn't handle the photos Matt took of ME in said hat.  Sad times. 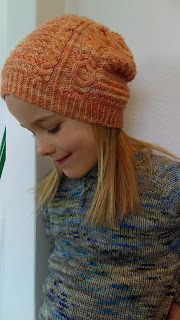 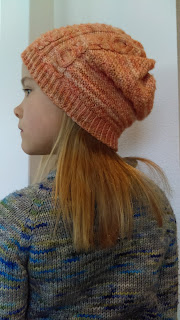 The hat is Fathom, from the first collection of Interpretations patterns by Veera Valimaki and Joji Locatelli (ebook on Ravelry).  The pattern fell under Veera's interpretation of the word "reflection."  This hat is one of the reasons I wanted this book (though Laneway is also lovely!).  I own the third volume, also, and the newest volume, number 4, is out, but I only see one pattern in there that I'd like to knit, so, I think I'd just buy the pattern individually, if I ever get a chance to knit it.  Veera does also have a blog, 100% Rain, if you want to check it out! 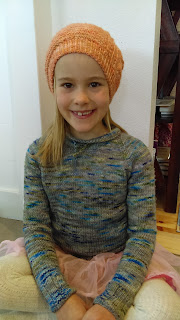 I used Orange Flower Yarn in the DK 250 base, colorway Peachy which is clearly NOT the called-for sport weight base, but I knew it'd work out just peachy keen (see what I did there??!), because of my loose knitting/tighter row gauge thing.  The yarn was something I ordered a couple years ago, because some raveler just had knit up the most glorious project...in which colorway, I do not know, but I think I managed getting my skein on sale - yay! 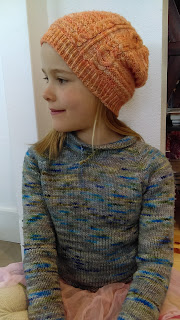 The pattern knit up beautifully and FAST, which is always great.  I had cast the brim on a couple weeks ago, before my beach weekend, and I let it sit on the needles until I finished Camden's Little Honey sweater.  What makes me laugh is that I knew I had to work next on Tiberius's Antler cardigan, yet I somehow COMPLETELY forgot all about that in my fervor to work on something for myself ;)  I will clearly get back to his cardigan now, as I need to cast on the sleeves.  I feel bad, as it took me all winter, and I haven't yet finished a cardigan for the poor little guy.

Another reason I was pushed into starting this hat is seeing Jeanette (Bookish Stitcher Podcast) knit up a gorgeous version, which she showed off on her podcast last month.  I clearly needed it - and it worked nicely into Nina's Palate Cleanser KAL (This Old Knit podcast).
Next up, we have the Cables and Twists Beanie by Jamie Sande.  It was a lovely, simple pattern - less purling than Fathom, which was nice, too, LOL.  I'd had this skein of Madelinetosh DK for years now, so, I yanked that sucker out of my stash and said it would be a hat for Tiberius (though it was originally meant for Matt - oops!).  The colorway is Terrarium, and it is a lovely green that sadly didn't come out well in the photos, both because of lighting and Tiberius acting like a crazy person.  I apologize for the poor quality :O 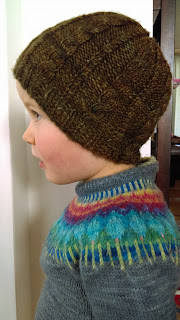 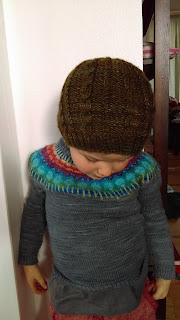 It is a FREEEEE pattern, which is a bonus!  I probably cast on ten fewer stitches, and I could have maybe gone up a needle size.  It's not snug at the moment, but I hope it actually fits through NEXT winter.  I also maybe could have gone a smidge taller, but whatevs at this point, aha!  Of course, it seems like there is enough yarn yet in the skein for maybe some mittens????  That'd be awesome!  I'll have to remember that a million months from now!

And now...a million days in review!! 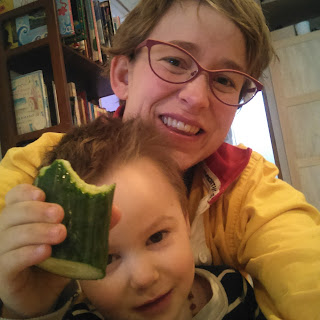 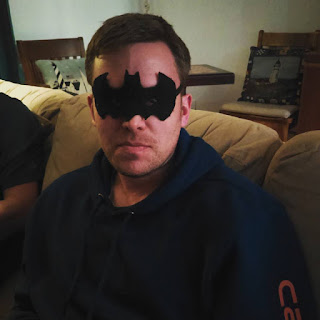