It Seems I have Officially SEAMED! The Berenice Sweater

I tell you what, folks:  this sweater was some sort of test...a test in patience?  Maybe a test in whether or not I actually know how to knit?  I have no idea. 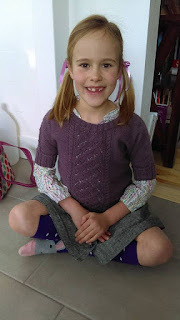 I have wanted to knit the Berenice sweater since it first came out in the first Kids Collection by Brooklyn Tweed....along with several other BT KC patterns, LOL.  I also totally purchased the Rosy Green Wool (I buy from Yarn Culture or Warm 'n Fuzzy) with the pattern in mind...envious all the while of Camden, because I secretly wanted that colorway for myself! 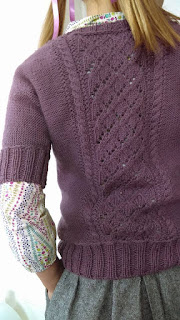 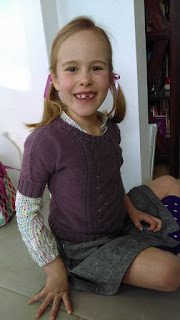 I knit the sweater on the Cheeky Merino Joy base in the Wild Mallow colorway.  This base is perfect for this style of sweater, as I think it lends a certain classiness, LOL, if there is such a thing.  But I'm in love with all things Rosy Green Wool, so, a bit of a bias exists here.  The base is perfect, though, for a loose knitter like ME.  When I move down needle sizes to reach gauge on fingering weight yarn, my row gauge tightens up too much, so, knitting on sport weight yarn is awesome, as it fills out my row gauge, while still giving me a nice fabric.

Now, if you check my project page, the knitting of the sweater doesn't appear too dramatic.  I did have to rip out once, due to forgetting about length of the sweater.  I wanted to knit a size 4/5, because I didn't want the excessive positive ease, but I had wanted to make sure it was long enough - though I clearly forgot.  Thankfully, I realized this while still knitting the first side.  The pattern itself is written by Julie Hoover (her FB page) and is totally easy to understand.  There is a lot of flipping from page to page to keep track of what I needed to be doing, but the chart is great, and while not memorizable, as the repeat is too long, it is easy to knit while catching knitting podcasts and such. 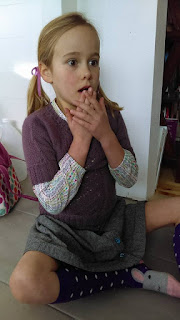 Once the sleeve increases started, though, I had to be more careful about where I was at.  I used two sets of stitch markers in order to keep track of chart repeats and sleeve increases.  I have to say that next time, I wouldn't worry about working between two sizes.  I wish I had just knit a size 6/7, though it fits Camden okay now - and hopefully through this fall.  I did forget, I am pretty sure (you should have SEEN me counting rows and stitch markers like a WACKO), one of my sleeve increase repeats...which is incredibly depressing, as I lost six rows of knitting, so, it surely won't fit that great if she grows another inch or so.  Sad days. 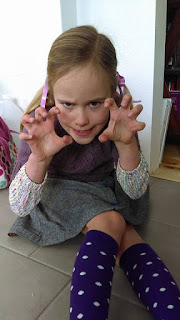 The sweater is knit in reverse stockinette, so, that feature is new to me....though clearly, the other side is stockinette, which, when knit flat, just means a bunch of purling.  I wonder if that is partly why my hand is broken???  LOL.  (no, seriously.)

Other than the lovely lace and cables in the pattern, a main feature of the sweater is in the exposed seams - picking up the stitches on the wrong side.  I LIKE that idea, but in execution, I am not sure my work looks so pretty.  The cuffs and hem are okay, but the neck is a bit crazy.  I've decided, though, that I can be over THAT....it's the shoulder seaming that kills me.  I think I did the right thing with the side seams, in using the mattress stitch.  This is the first time I've ever fully seamed a sweater.  So, when I needed to seam the shoulders, I was thrown for a loop, as I clearly was presented with stitches in the wrong direction, so to speak.  I tried looking up information on this, but I finally just said EFF IT and tried my best...which looks WONKY.  Like...not cool.  I can pretend it's a design element, like Melinda over at the Yarnder Woman Podcast likes to say, but I'm not sure I can even pull that off.  Live and learn.  I was just over knitting the sweater at that point.  I want to point out again that the pattern is quite lovely, but I already felt like it was on the needles for far too long, having cast on over Thanksgiving weekend, and I just wanted the end product.
It IS cute, and I wish I was awesome like so many other knitters and could figure out how to knit it for myself!  Julie Hoover should just be cool and design it for women ;)

Posted by cottington at 8:56 PM