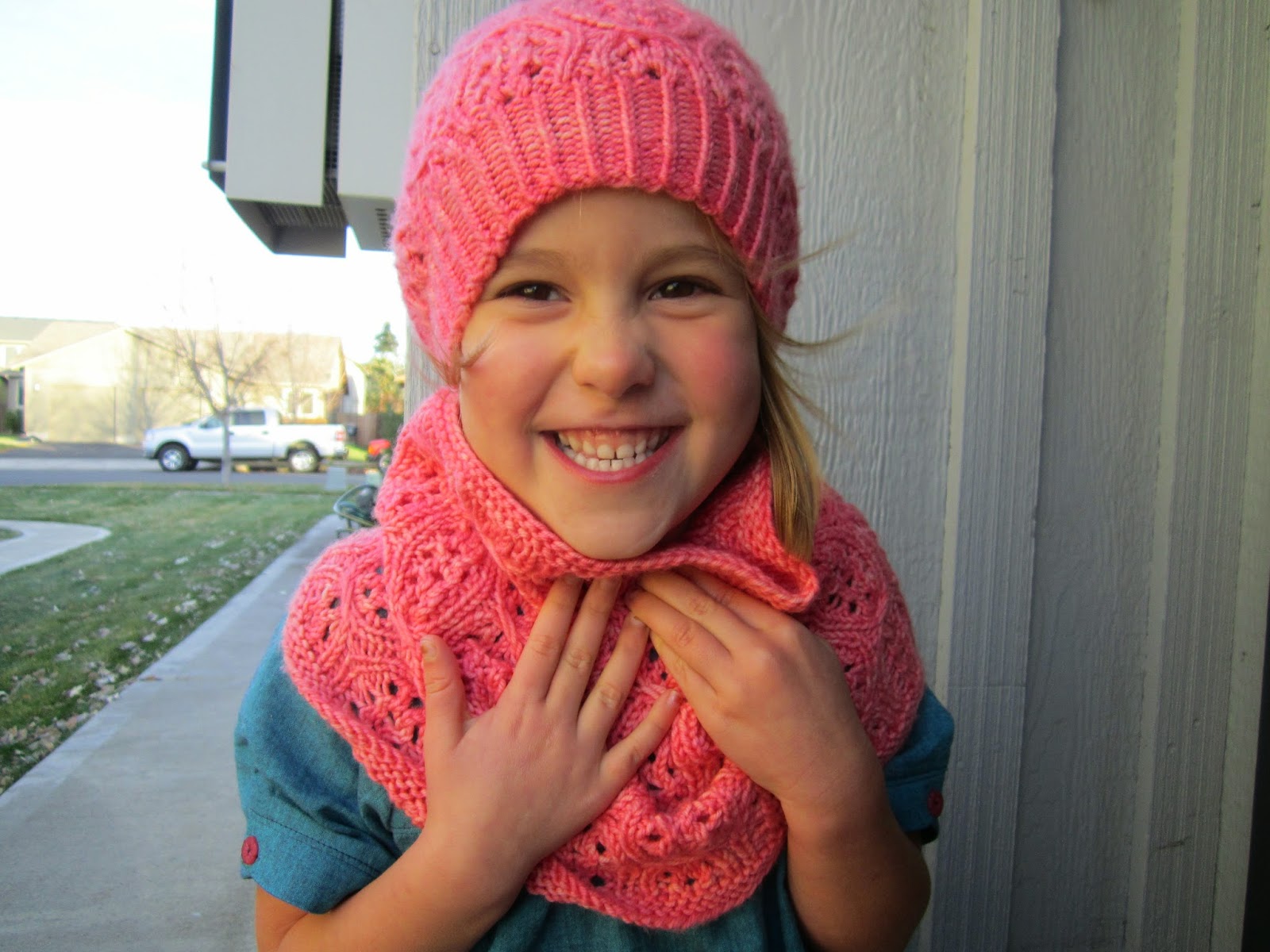 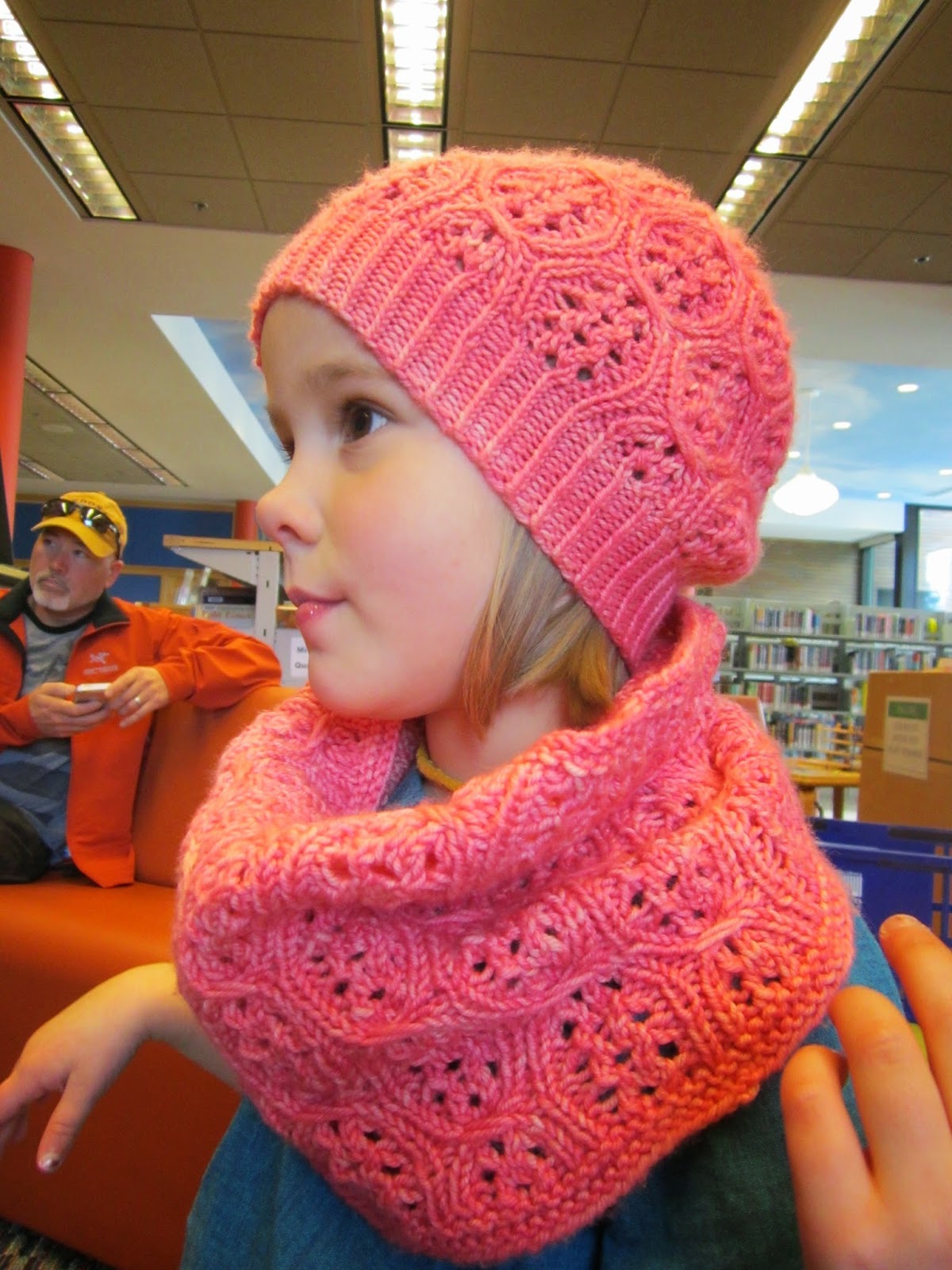 This girlie can officially be WARM this winter!!!!  Seriously, isn't it beeee-yoo-tiful???

Can I also say that I'm glad it's DONE???  Aha!  Neither of these projects is lengthy/difficult.  Naturally, though, I made them more difficult - because that's the sort of ship I run.  The first time I made the hat, it turned out too small, because I failed to read the directions and left out the first several rows I was to knit after the ribbing.  Such is life.  This first version will head off to a cousin - naturally!  I didn't want to rip it out, because I figured a finished hat is a good thing - as long as it fits someone and I have enough yarn to complete everything else, which I DID.  Whew. 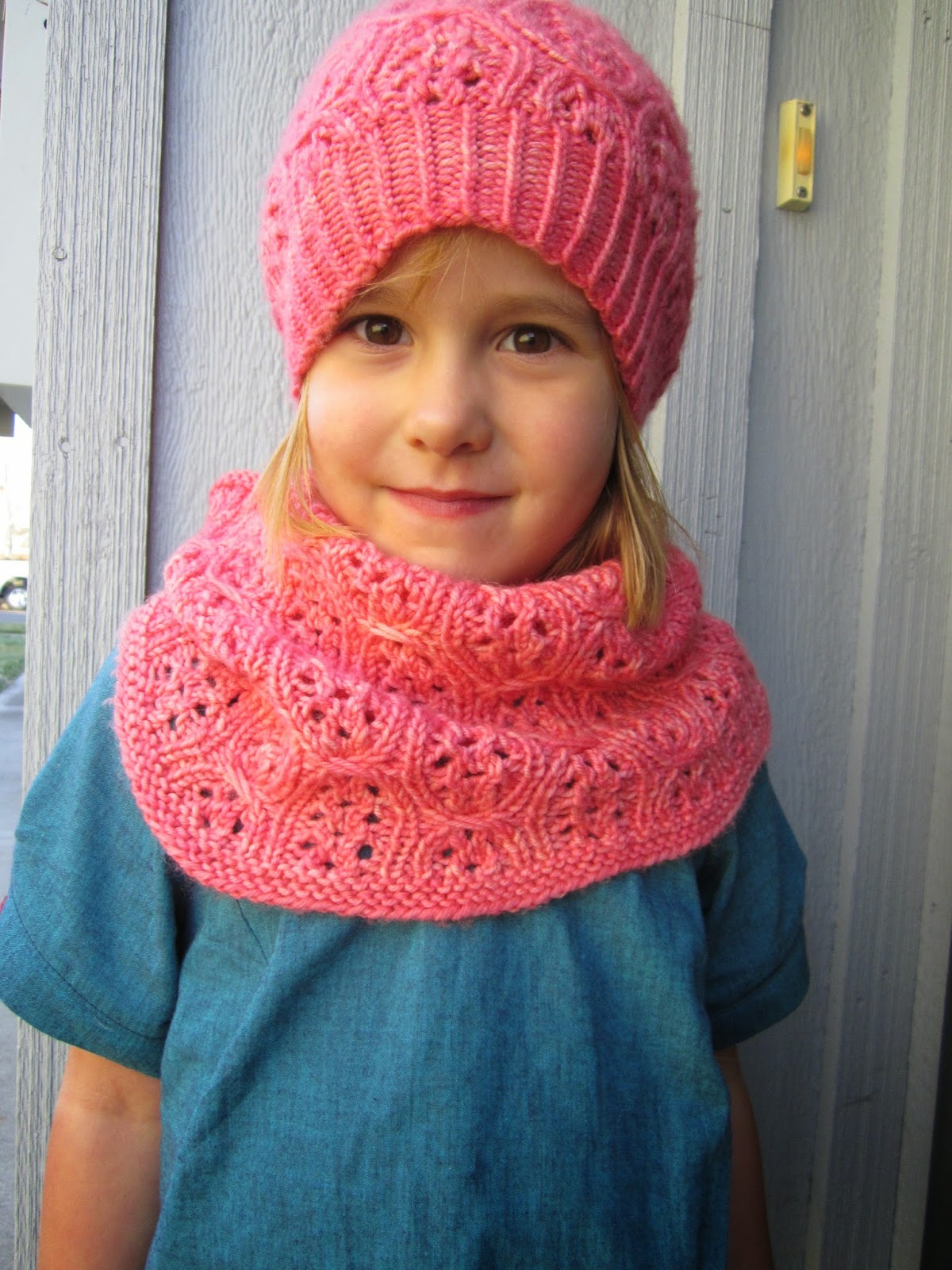 I used Colour Adventures (the FB page link), base Dia Merino DK, colorway Tender.  Elena Nodel, as always, dyes up a gorgeous yarn.  And it needs to be known that after blocking this yarn out, it softens up super nicely, not that it's rough to begin with, but you get me??  The patterns, Cabernet Hat (in DK weight) and Cabernet Infinity Scarf (which covers several weights of yarn, though the link says it's DK) are written super well - easy to understand and no issues at all.  Monika Sirna, the pattern writer, includes a tutorial to help peeps out with the cabling, but it's not something an experienced cabler needs to look at. 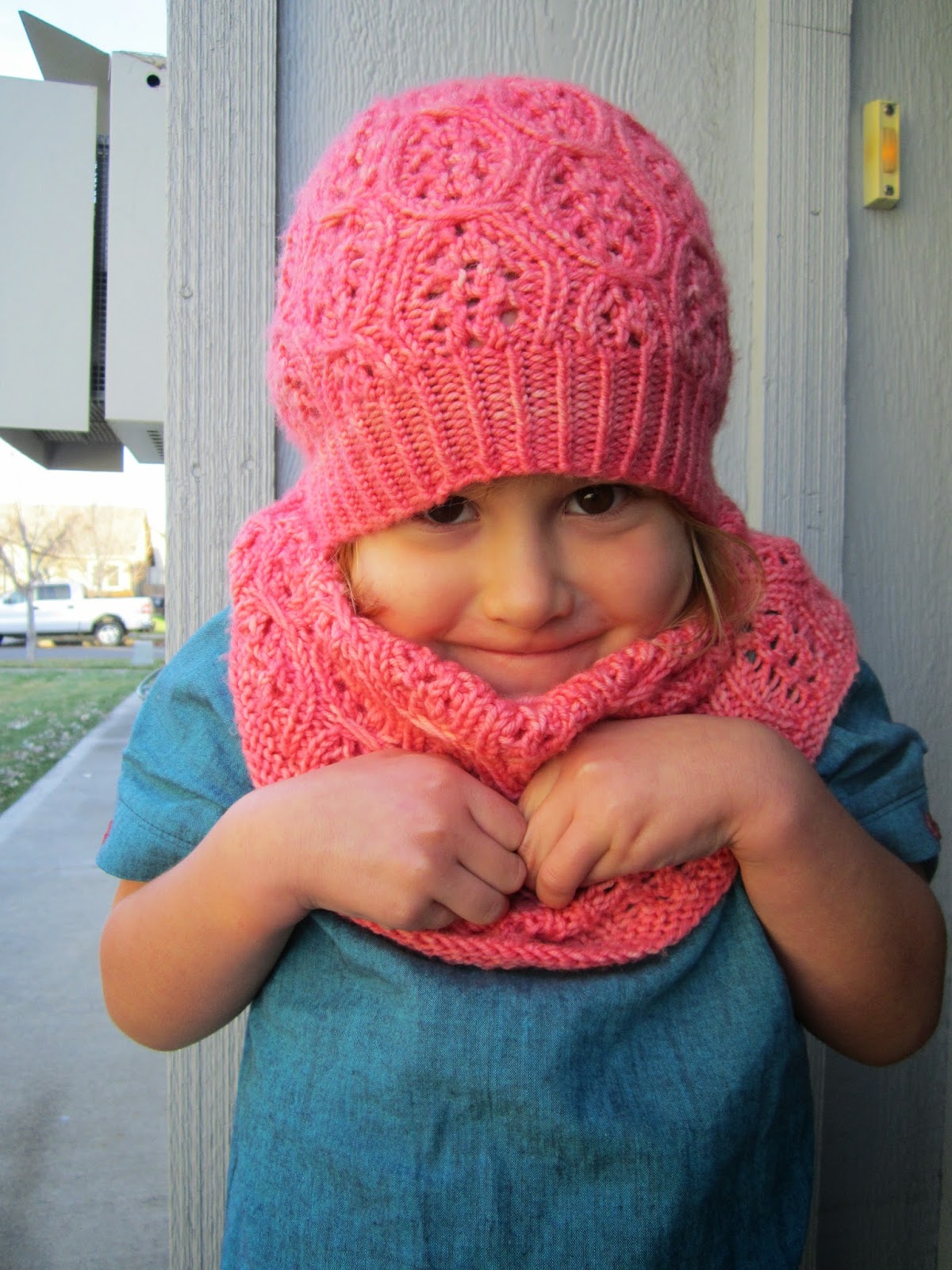 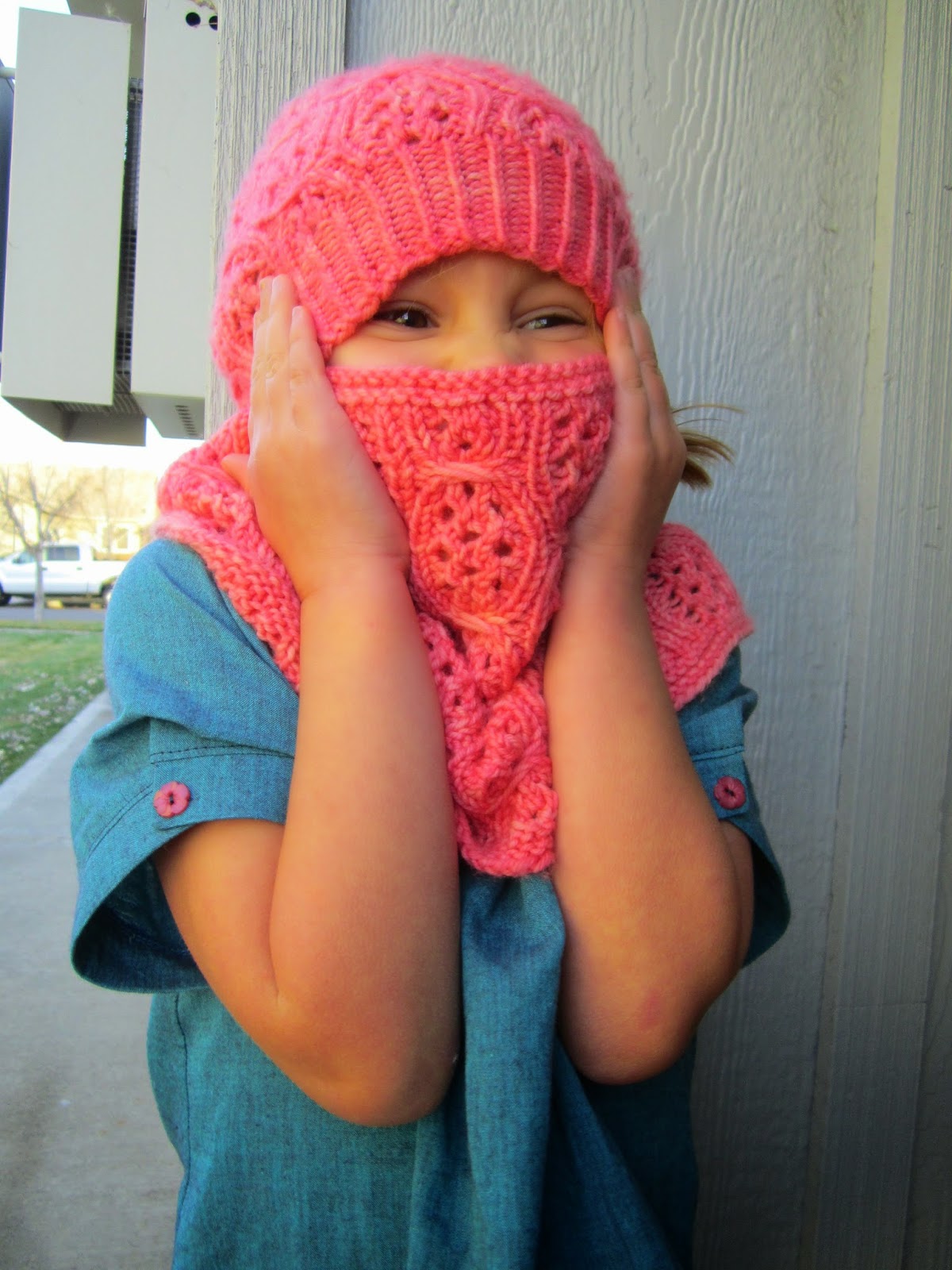 With that hat, my gauge was trying to trick me, as usual.  I didn't want to go down a needle size, and I didn't actually do a gauge swatch IN pattern, which the pattern calls for.  I winged it, and I found the right size needle I needed for the ribbing.  I cast on for a small but did the length of the medium.  And naturally, after blocking, it's a bit bigger in the ribbing than I'd like it to be, but thankfully, the hat is a teeeeny bit slouchy, so, she'll grow into it just fine.  And as you can see, the cowl is a great fit, so, I'm pretty happy with the set. 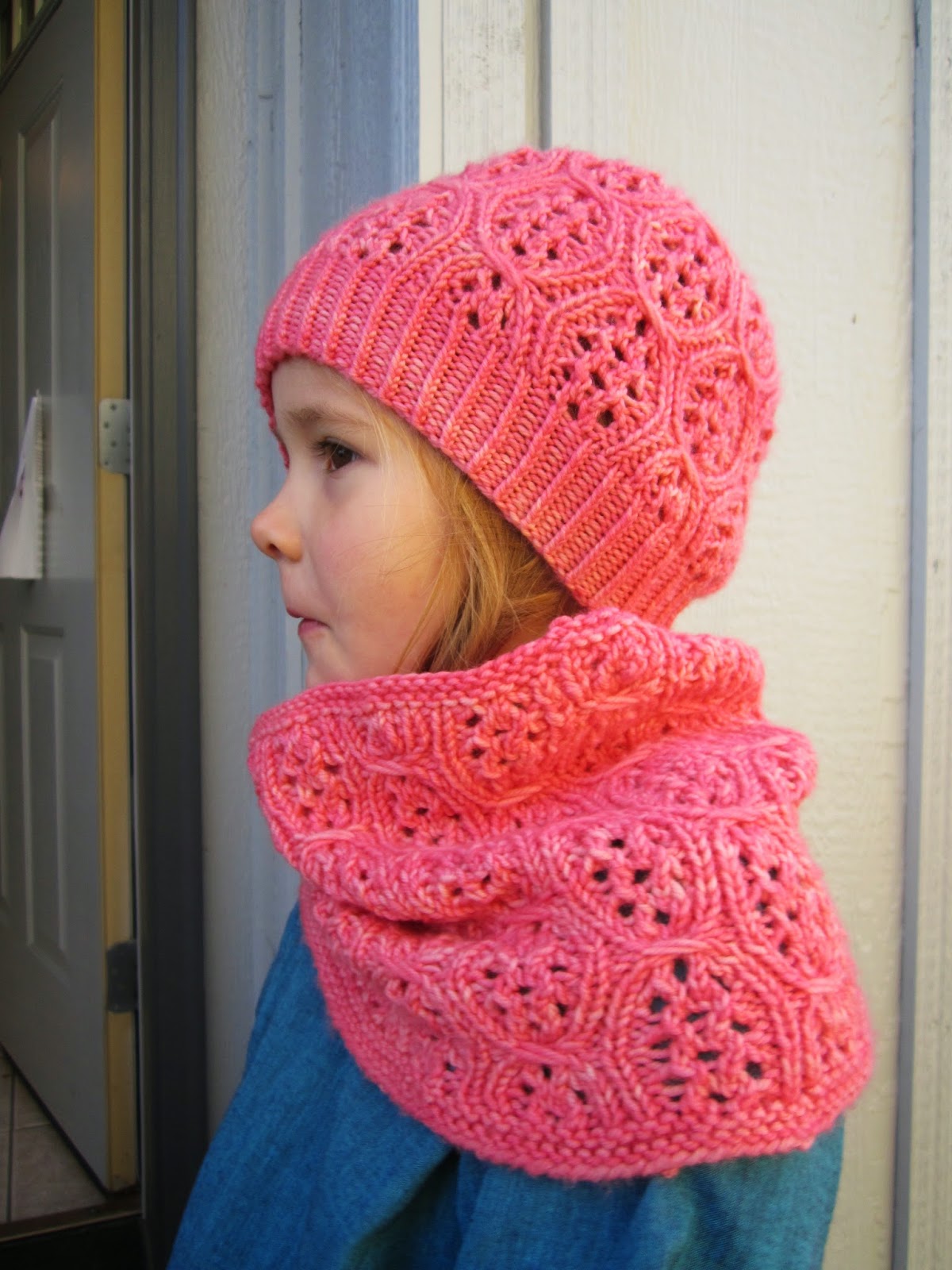 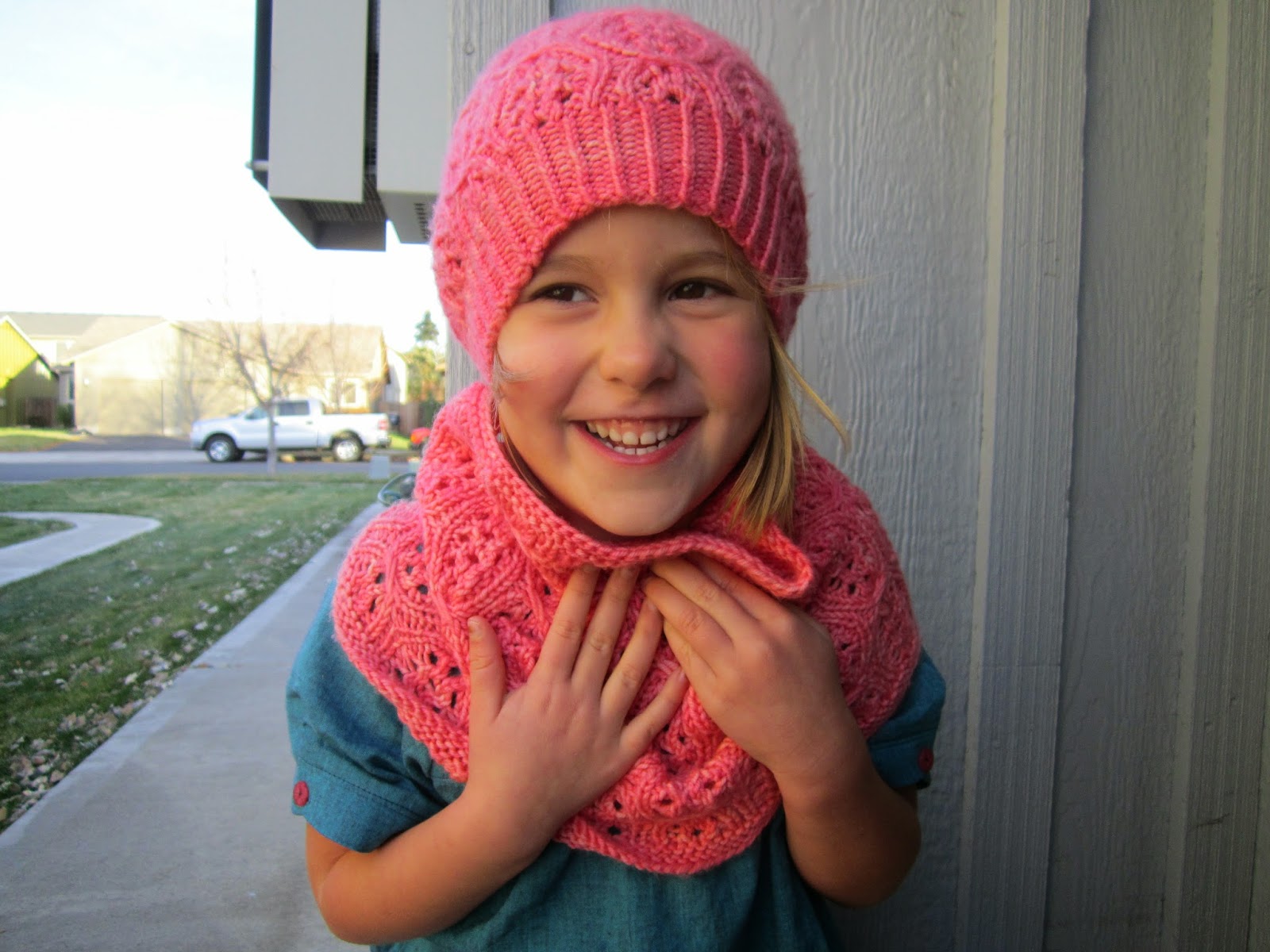 As a bonus, it SMELLS awesome, aha!  I used Eucalan in the grapefruit oil scent...which for some reason, really stands out this time :)
And bonus:  I love that I made two hats AND a cowl out of two skeins of yarn!  Yay to me!  One day, when I have TIMETIMETIME on my hands, I will whip up one of these sets for moi.

One day.
Posted by cottington at 8:14 PM