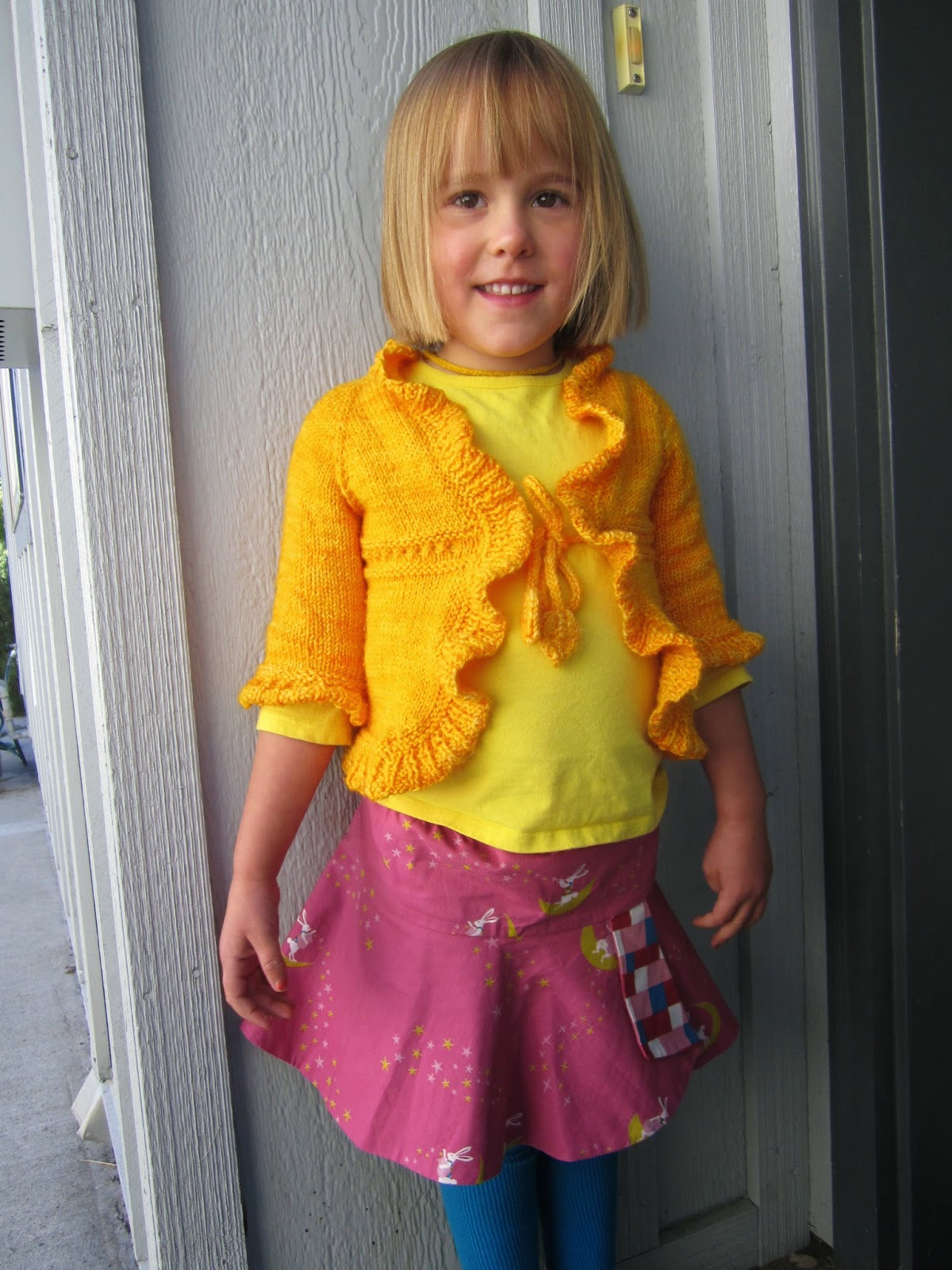 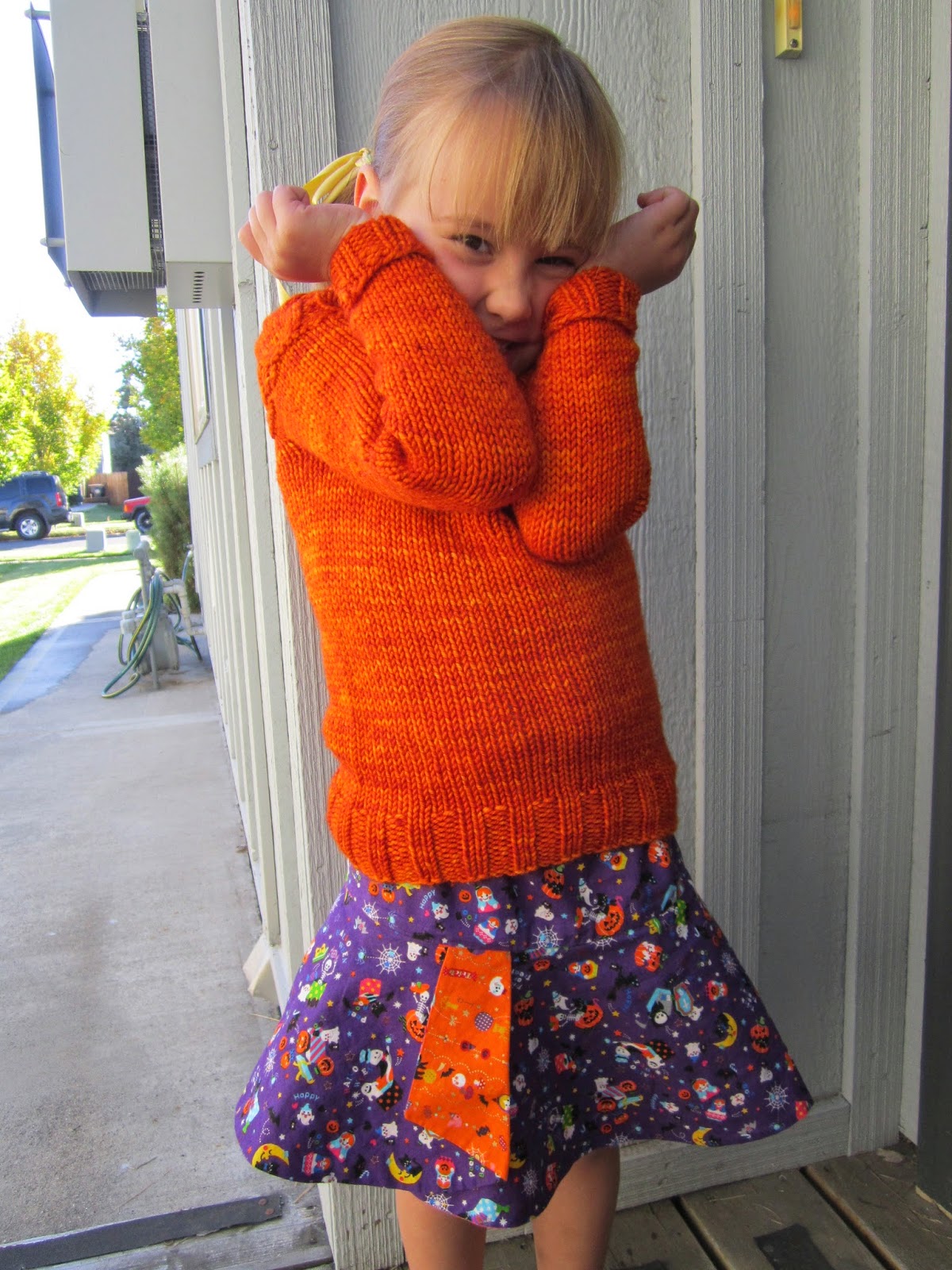 Dudes.  BEST Christmas go-to gift EVER.  Y'all need to give this skirt a whirl - literally and figuratively.  What skirt, you say???  Why, my friends, the Oliver and S Hula Hoop skirt.  I'd purchased this pdf (You CAN'T be serious, Autumn, you don't buy THOSE!  I KNOW, right?!) a while back, because the look of the skirt did interest me, but I hadn't gotten around to it. 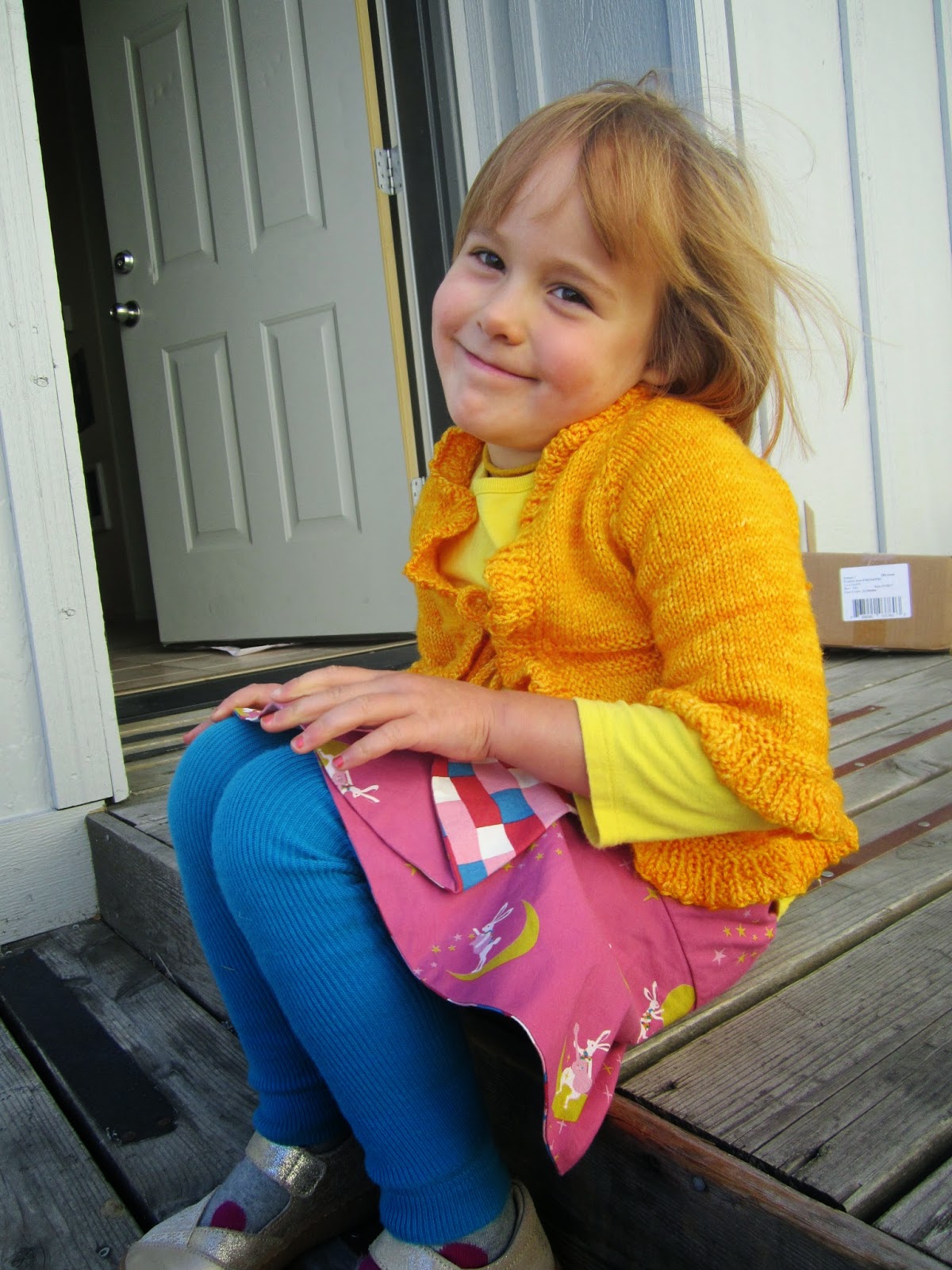 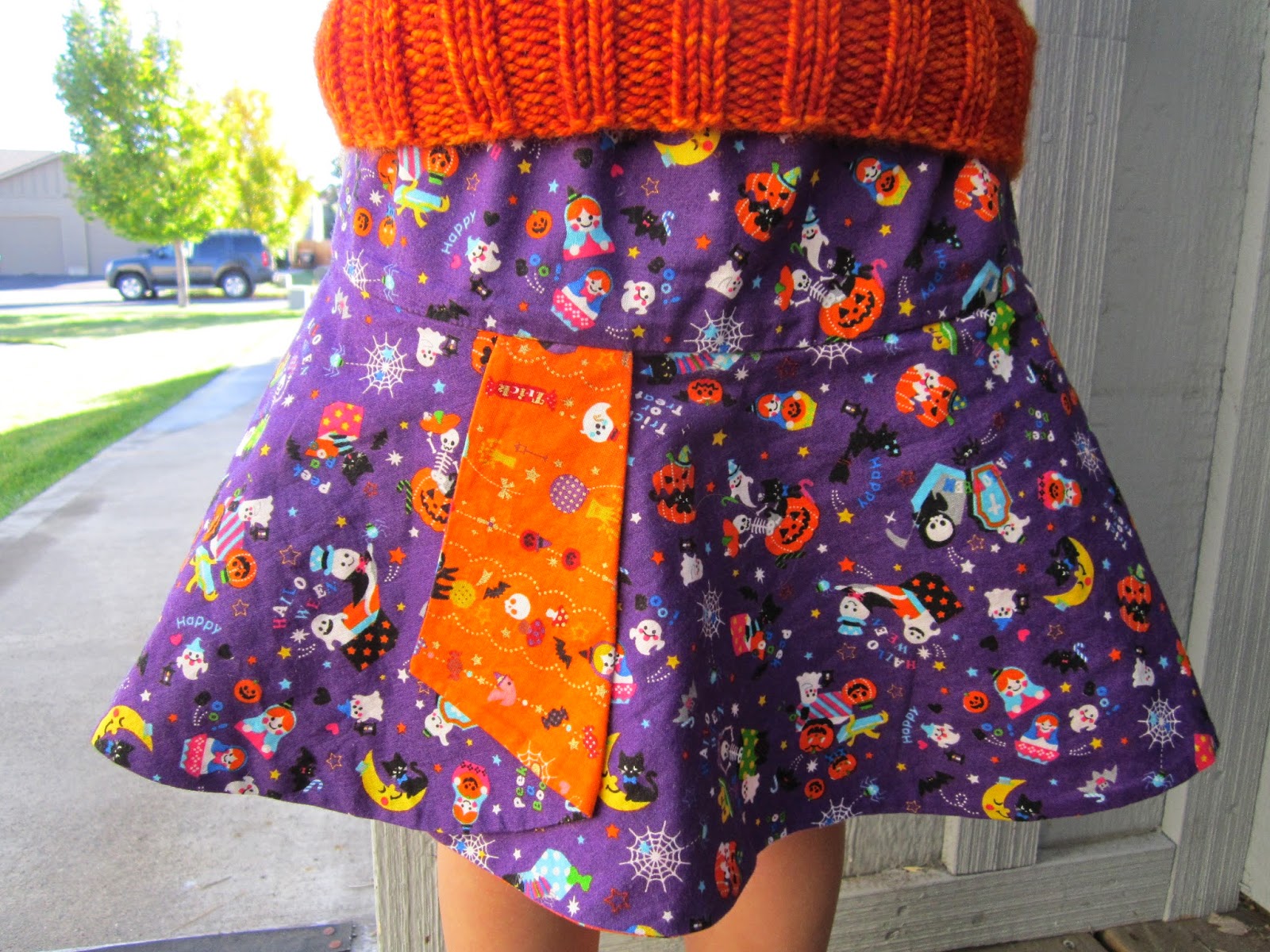 Then tragedy struck.  Tragedy of the first-world problems NO SWEDISH TRACING PAPER kind.  I realized, as I grabbed my roll of tracing paper a couple weeks ago, that there was not nearly enough on the roll to make the Oliver and S School Photo Dress I'd been planning to sew (worry not, for the fabric is still sitting at the end of my ironing board).  I refused to buy it on Amazon, as I like to support my peeps up at Modern Domestic - but that meant I would have to wait until nearly the end of October.  Sad times.

So, I did the only thing a girl CAN do.  I turned to my pdf patterns.  I let the girls over at That's What She Crafted and Irons in the Fire what I was about to do, and they couldn't believe their ears (or eyes, as it were), aha! 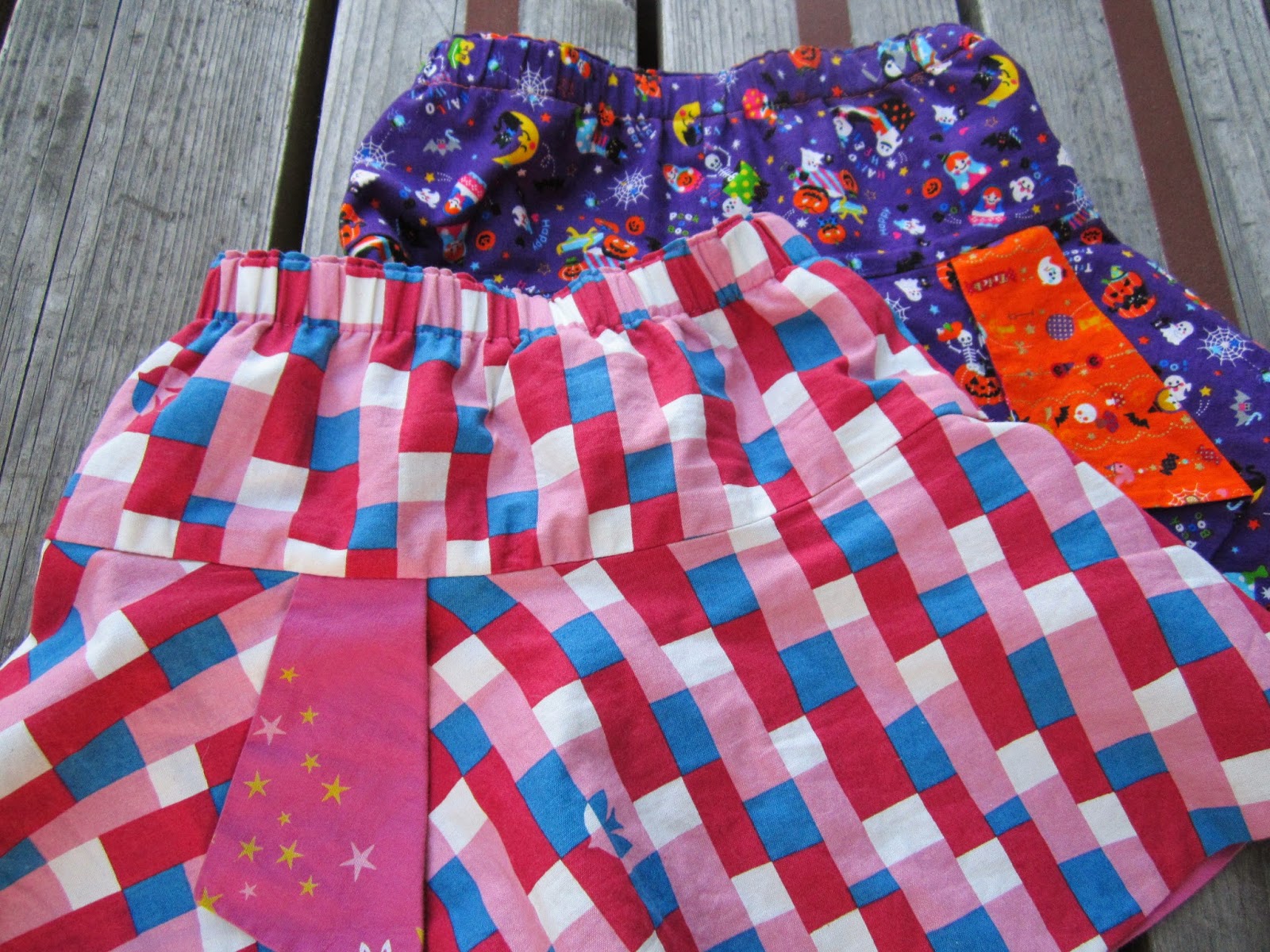 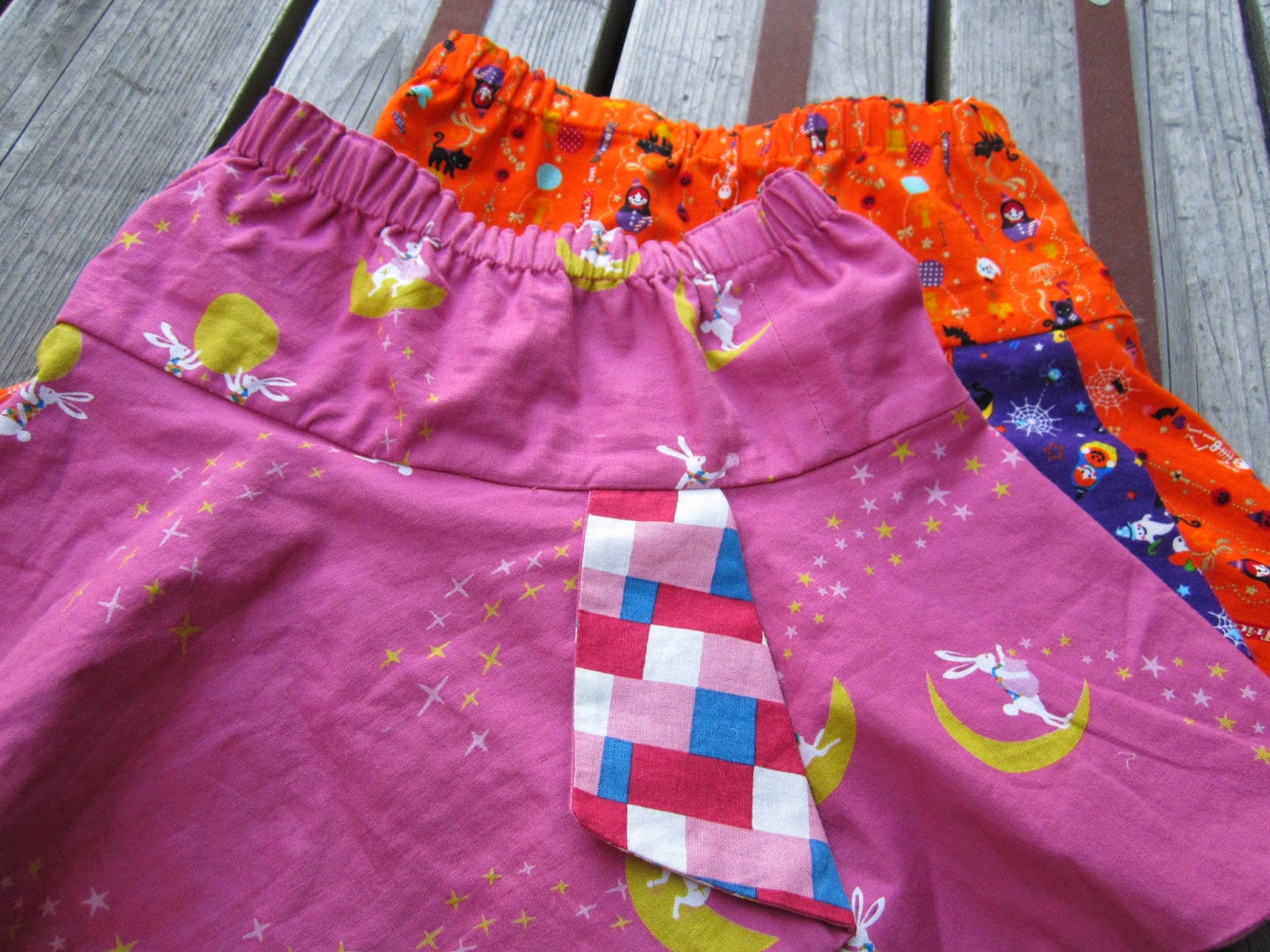 I'm soooo glad I made the decision to go with this pattern.  It is insanely easy (even if you're like ME and do ridiculous things with the easiest patterns, which then involve seam ripping, clearly), and after one, it's easy to pump out several - which I have :O  Two, however, are for Camden.  As always, I will excuse away the photo quality....but trust that they're cute, and Camden loves them and has been complemented several times while we've been out and about :) 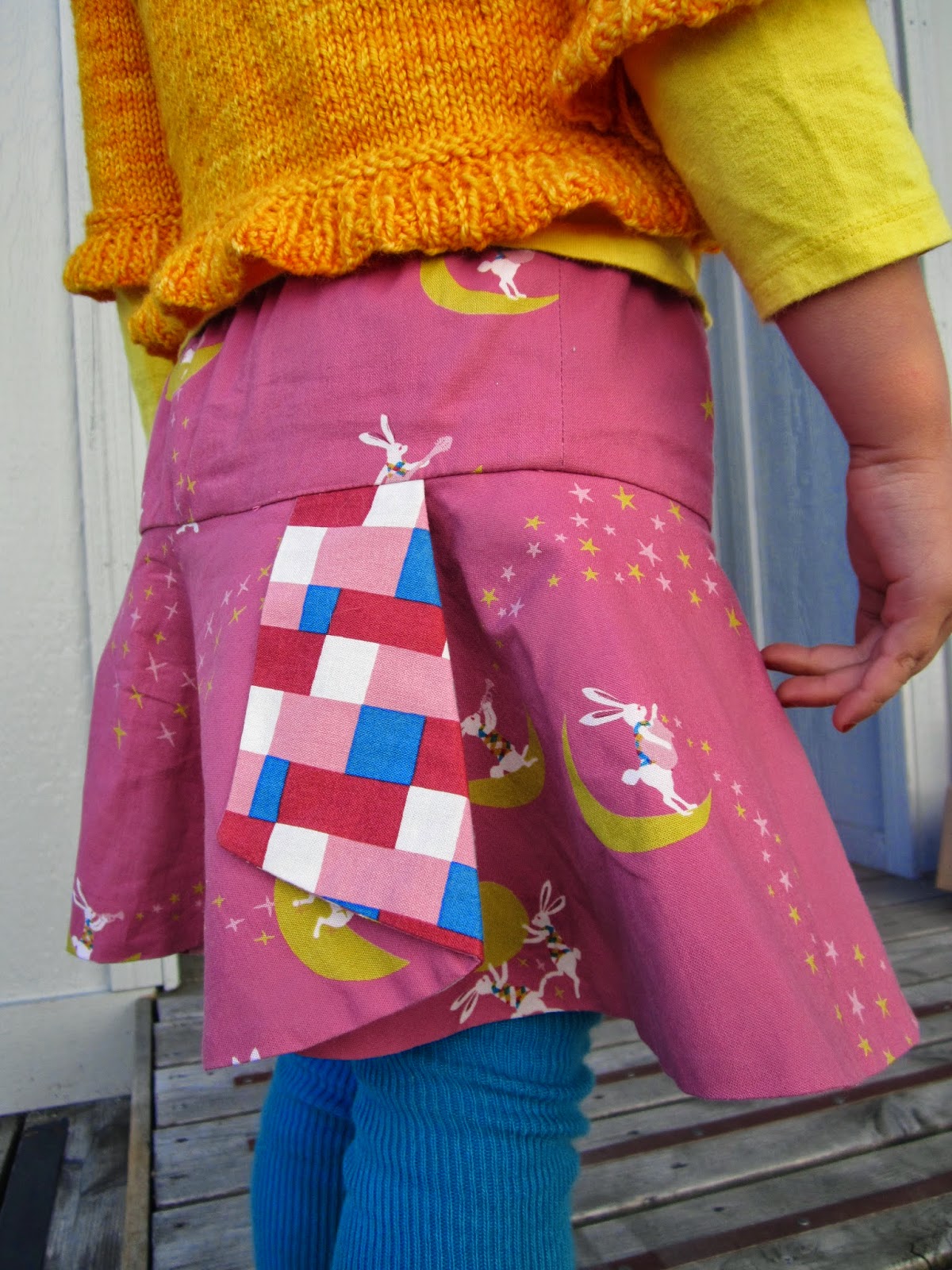 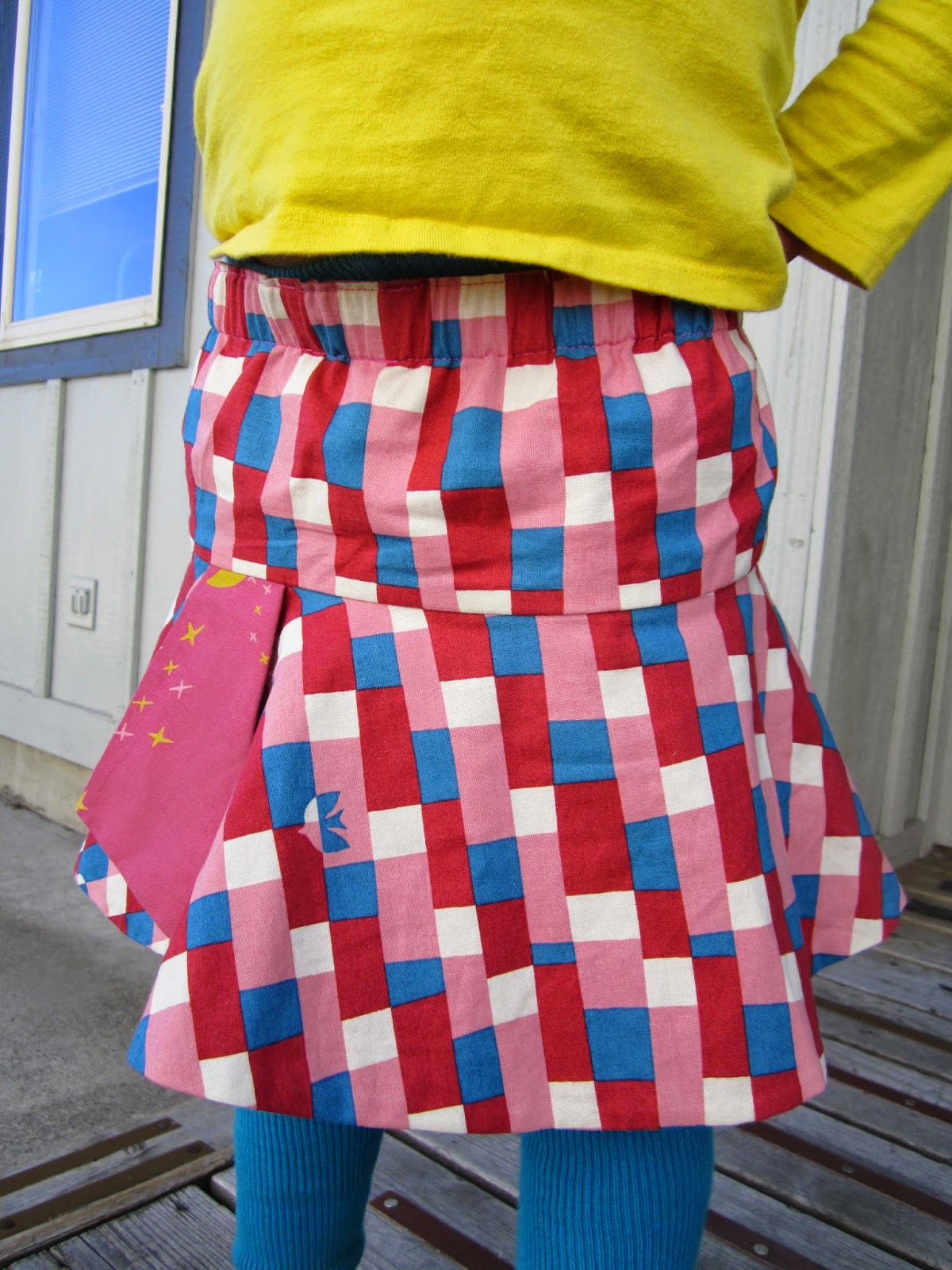 I don't have much to say about the pattern itself.  I think there might have been a step or two that I thought were unnecessary, so, I didn't do them (I was maybe supposed to baste the top edge of the waistband before I folded it, but that seemed like a silly waste of thread).  Other than that, though, the pattern goes together super fast, and if you cut out a few at once, you can whip through these suckers.  Plus, people...HOLLA!!!  It calls for a full yard of fabric for a size 4, and you totally only need 3/4 yard for each side.  Yard schmard, I say! 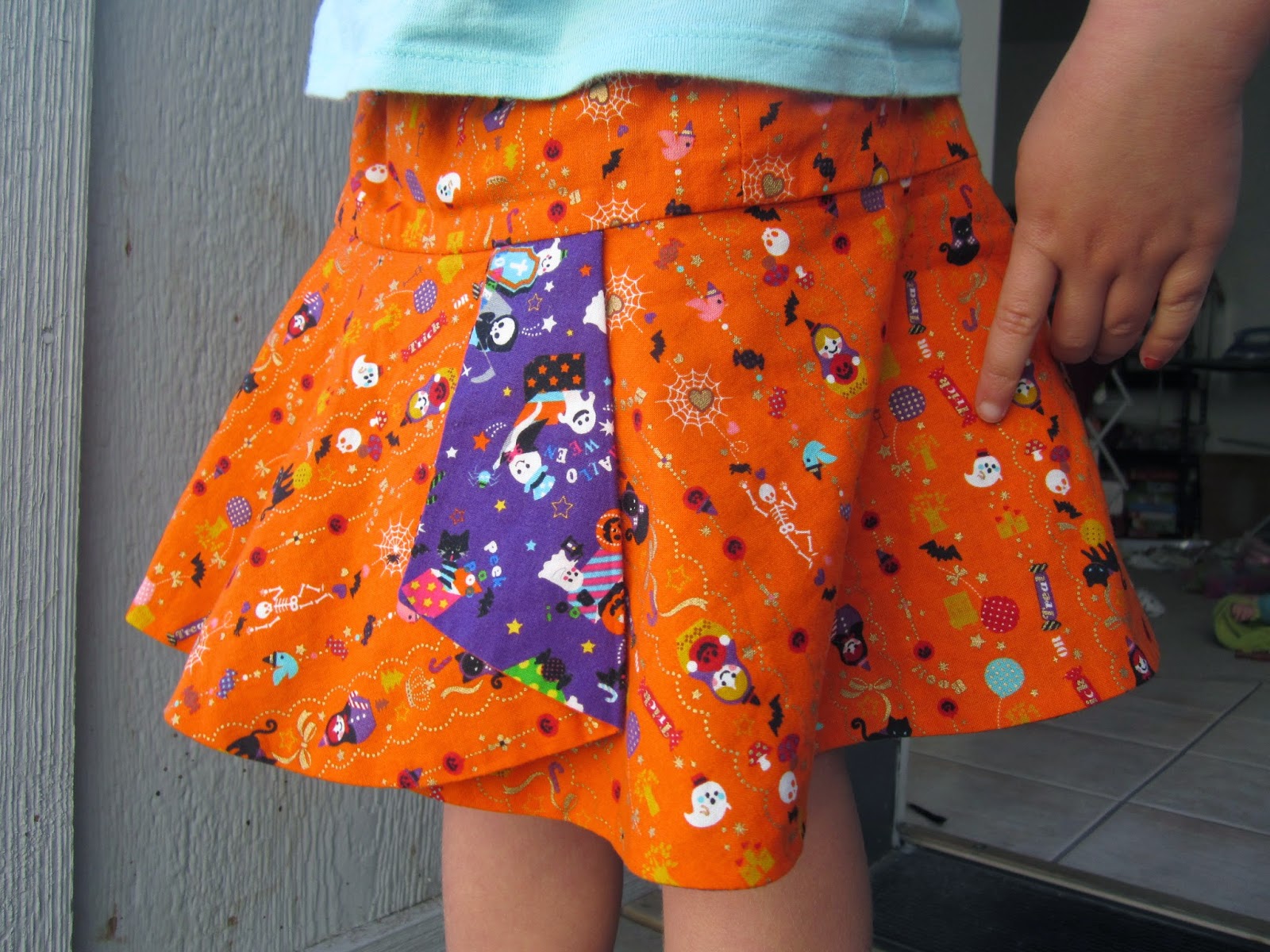 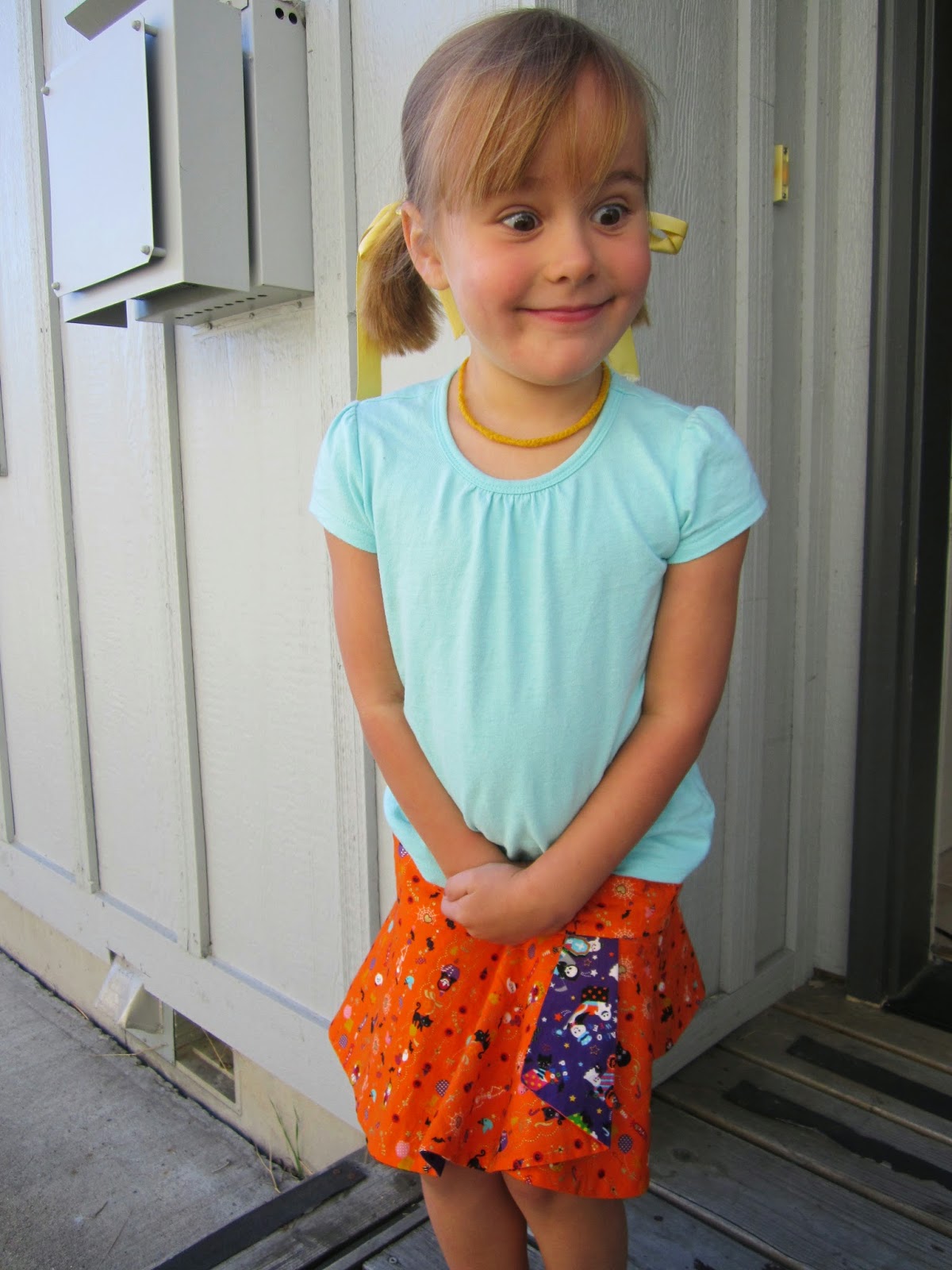 I love that Camden gets a skirt....but not just ONE skirt - TWO...and not just TWO - FOUR, really!  I did use stash fabric I'd already used once before, which is nice.  The Halloween fabric is from Camden's second Halloween, when I sewed a knot dress, and the bunnies (Cotorienne) are from one of her Oliver and S Sailboat sets.  So, thumbs up to me for using up fabric from my scrap bins 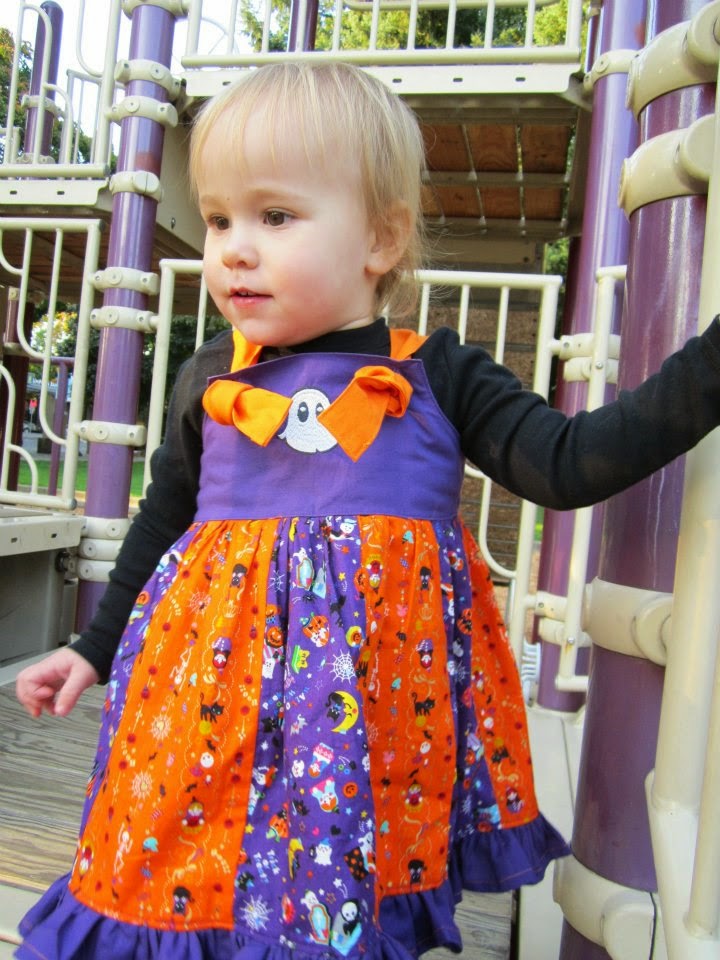 I definitely need the next size set - totally worth it!!!..........And stay tuned for the Christmas gift versions of this skirt!
Posted by cottington at 9:58 PM