Truffula WHAT??? A Modkid Quinn!

So, first things FIRST:  I think this dress is beeeeeyond cute!  Second things SECOND:  I think there some details/construction ideas left out in this pattern, which is a first for a Modkid pattern for me.  But I could be nutso; there is always that. 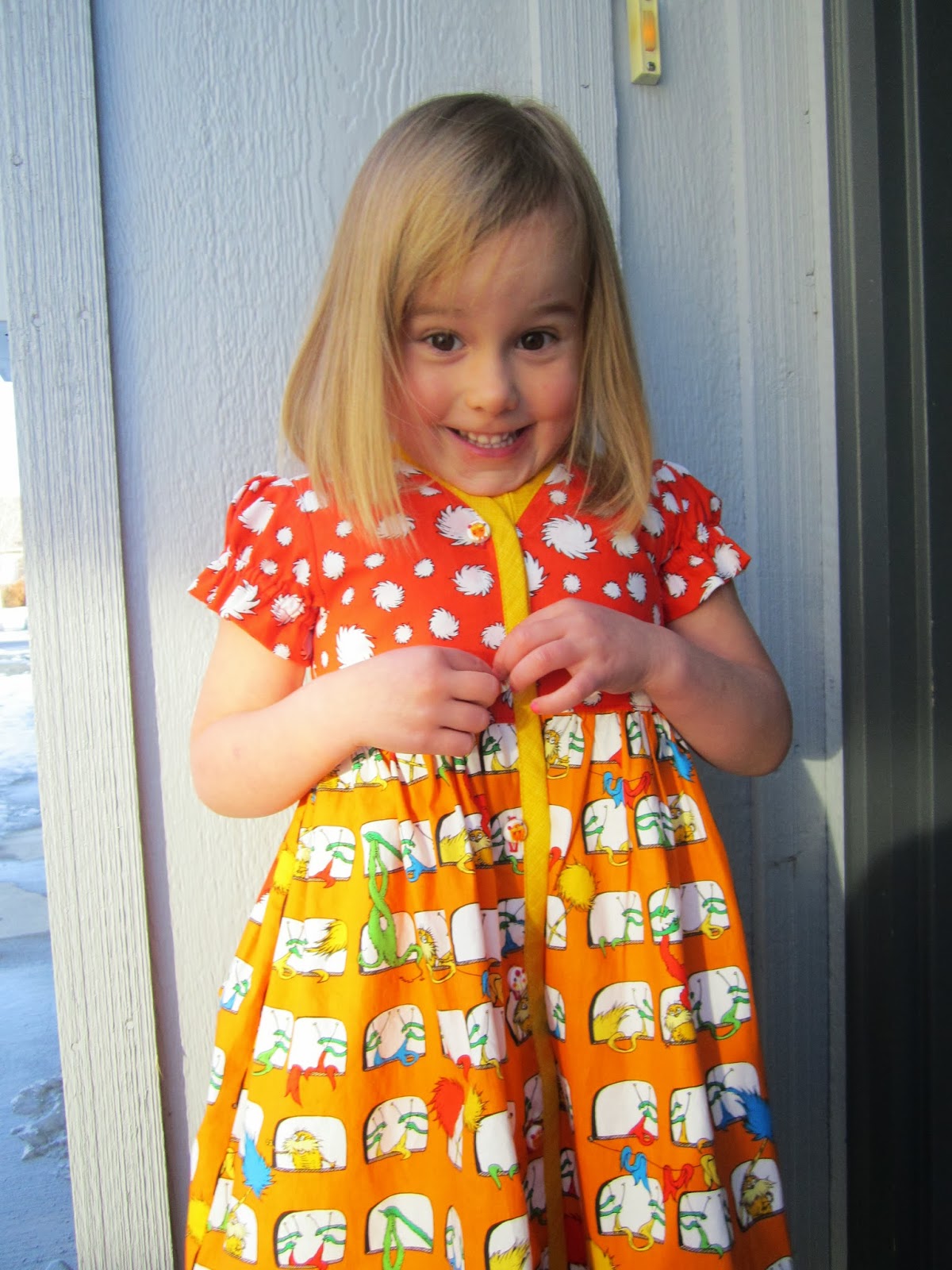 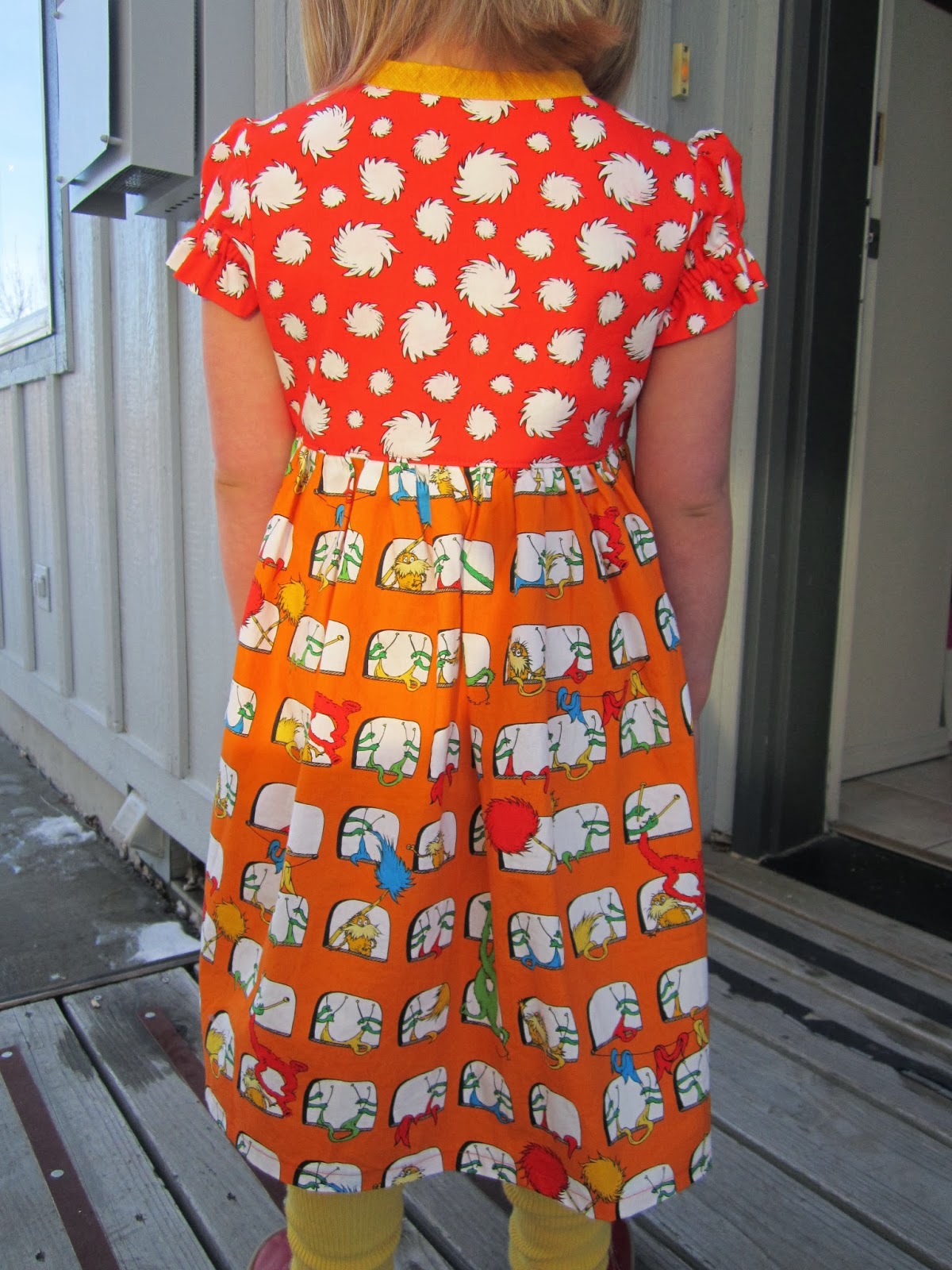 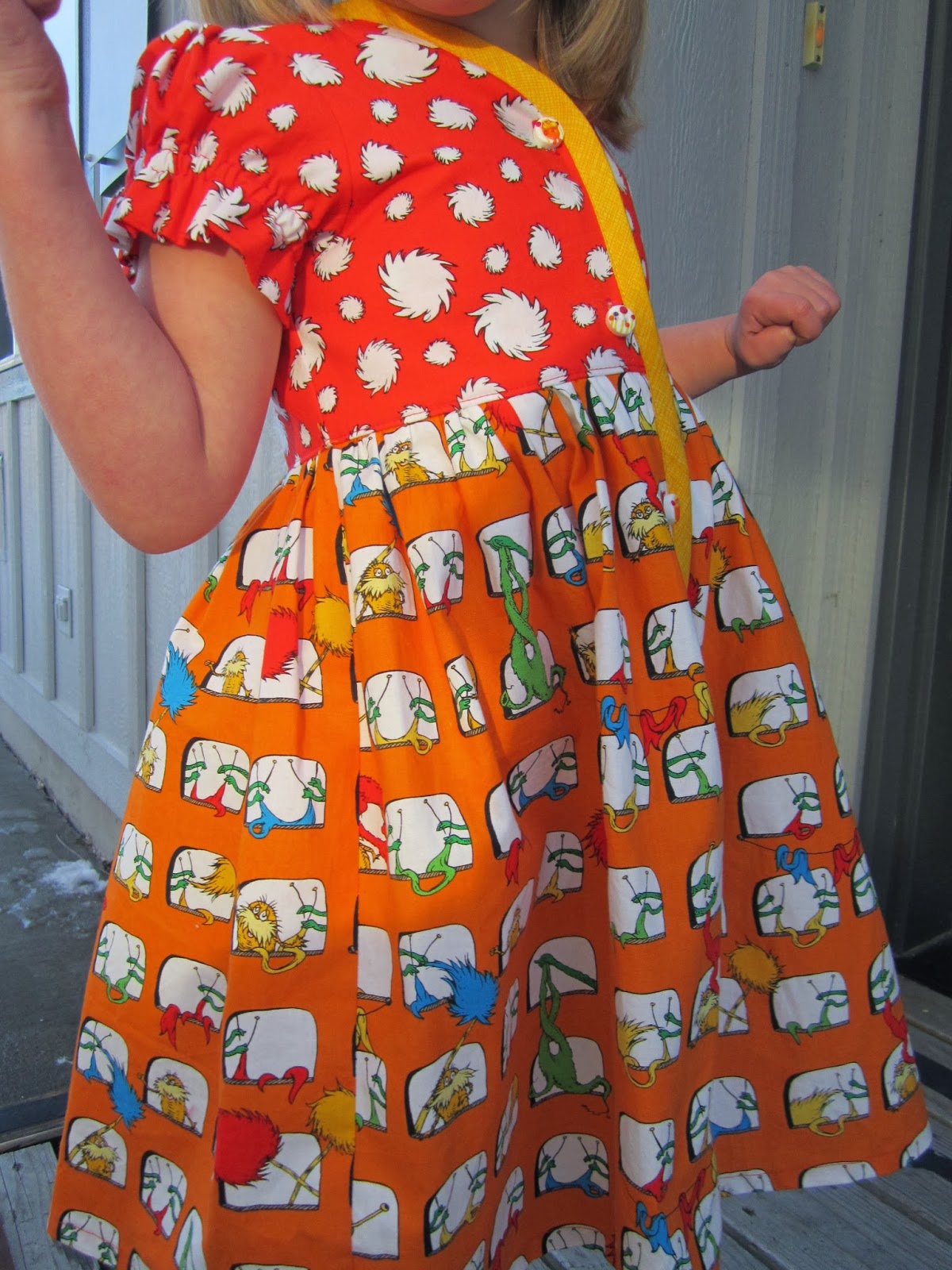 I did do the size 4 in the Modkid Quinn, as chest size-wise (23 inches, finished measurement), it should have been the right choice for Camden.  However, this sucker isn't going to fit her for very long, sadly.  (Interestingly, I feel the back fits quite well - just that the bodice pieces should have come in more, and I'll remember this - I hope! - when I make her next version.)  It's quite snug, and one thing I did to try and fix that problem, though it may have been silly, I suppose, is to widen the button band that is attached to the main dress.  And speaking of this very button band, I do think the attachment method is weird.  From what I understood in the pattern, it is to be attached, right sides together, then turned out, away from the dress - the seam serged...?  Not sure if that was clear.  I chose to attach the button band, widened, as I mentioned, pressing down the back side of the band and top-stitching it closed, after fold it to meet the original seam line.  That is much neater in this sort of situation.

Also, I do think this dress should have called for interfacing, which it did not.  If I had been foreward-thinking when constructing the bodice, I just would have added it, per the norm.  Not sure why I didn't think of it.  I DID think of it when I stared at the skirt, which is ONE layer, and realized I would be attaching BUTTON HOLES to that sucker!  :O  Well, that's no bueno at all, in my humble opinion.  So, I created a wee facing, which isn't the prettiest thing, but it'll do.  My machine would have eaten the fabric ALIVE, wasting Seuss-like resources, if I'd added button holes to ONE LAYER.  (Not sure if you are reading my amazement at this oversight in pattern construction!!!)

Other than those issues and the fit issue, it is SUPER cute.  I'd had this Seuss fabric since the early Spring, I believe, and I'd used some of it on another Modkid pattern, the Bailey, which Camden loves. 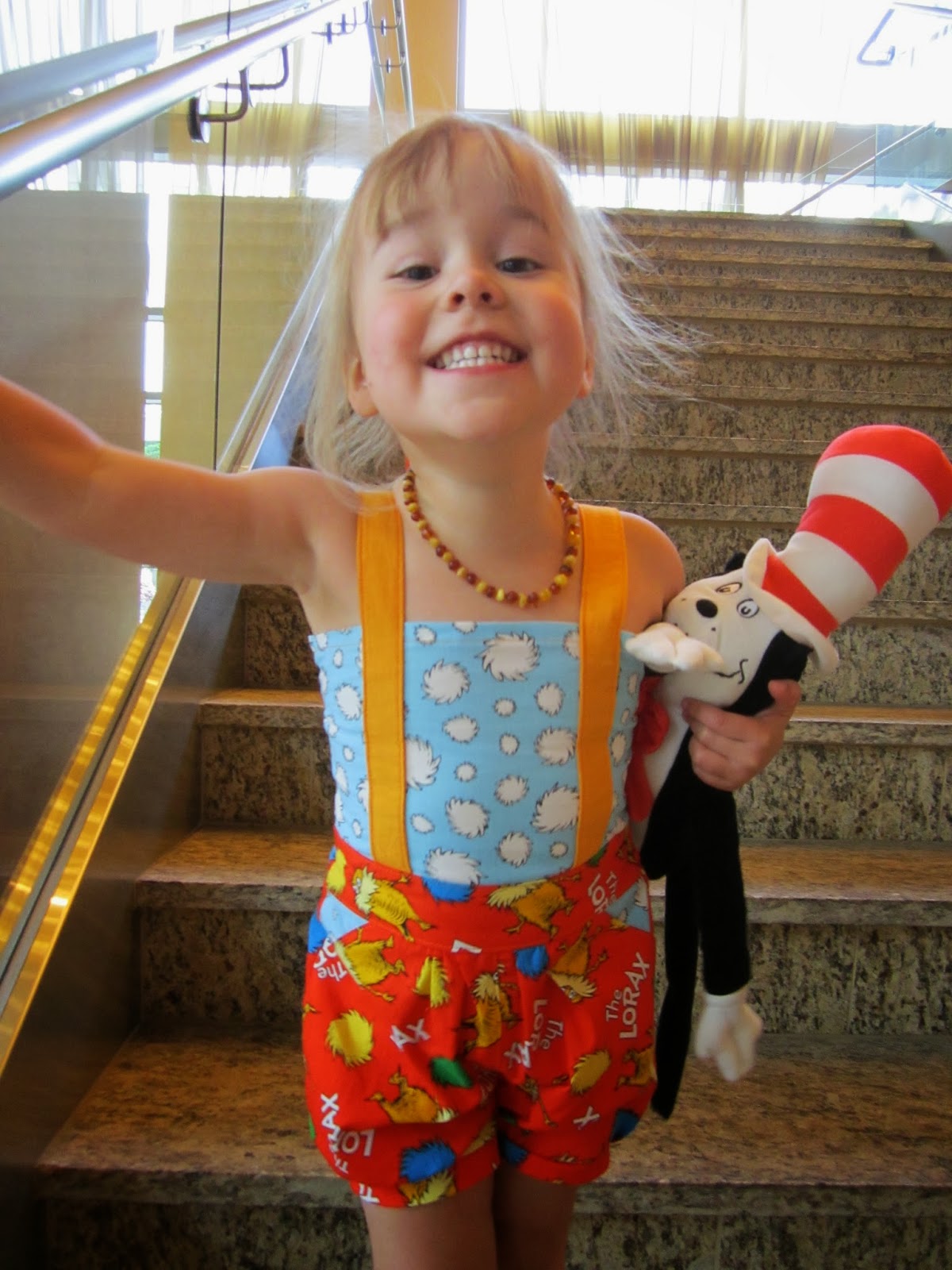 I do prefer adding elastic in the arms to get the desired ruffle effect, rather than using elastic thread in the machine - it's longer-lasting, and neater, I find.  The general construction of the dress is clearly super easy, and I have actually had the dress done for a couple weeks, buttttt.....!!!!  I was moping about, thinking I HAD to suck it up and buy buttons from a big chain store, when it came to me!  I messaged Tessa Ann on Etsy to order Lorax buttons - holla and hello!!!  They were able to make some super cute teeny Lorax and truffula tree buttons for the dress, and they came out soooo well-done! 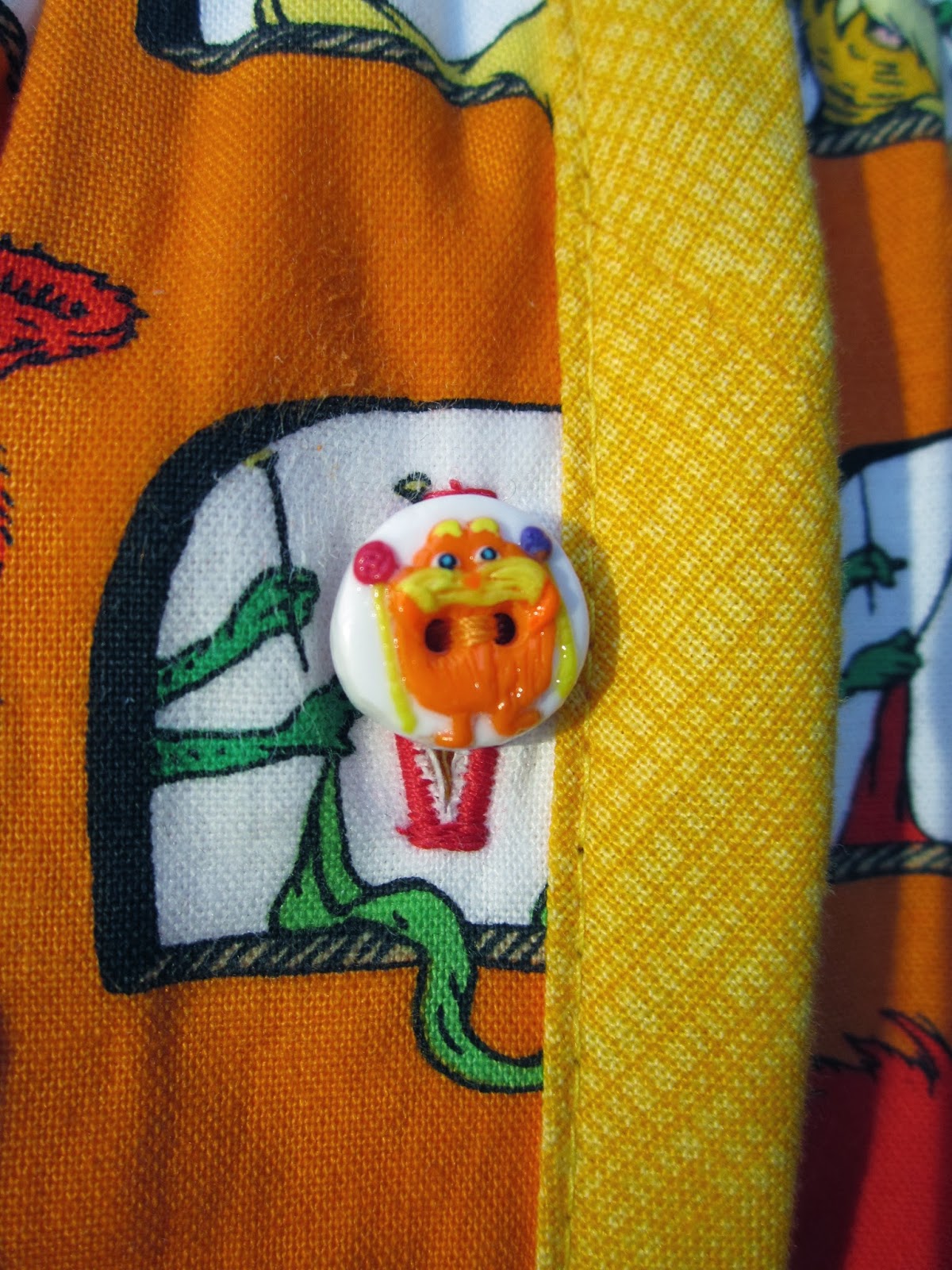 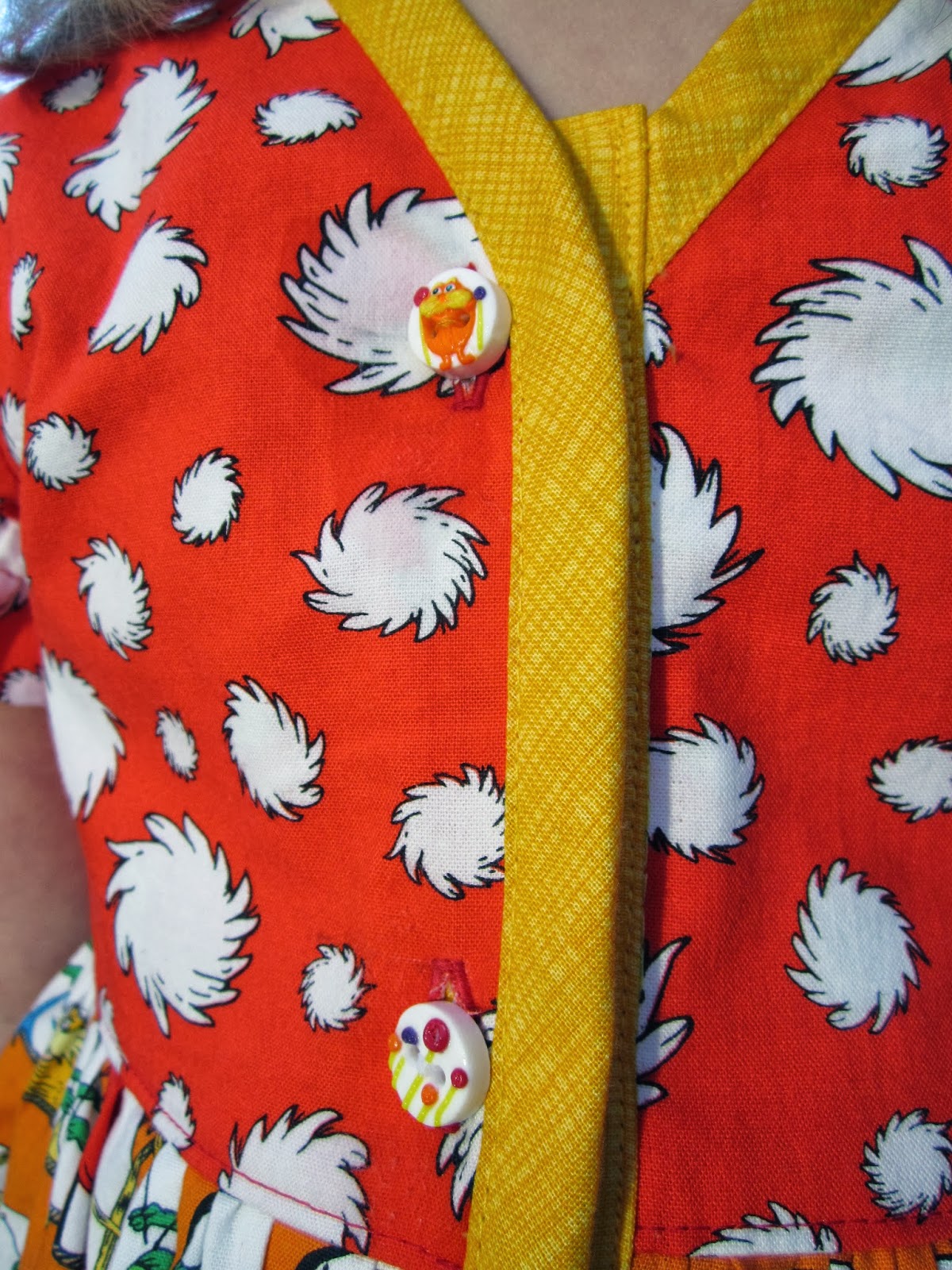 So, I squeezed Camden into this sucker, and she had a grand time, jumping about in the melting snow! 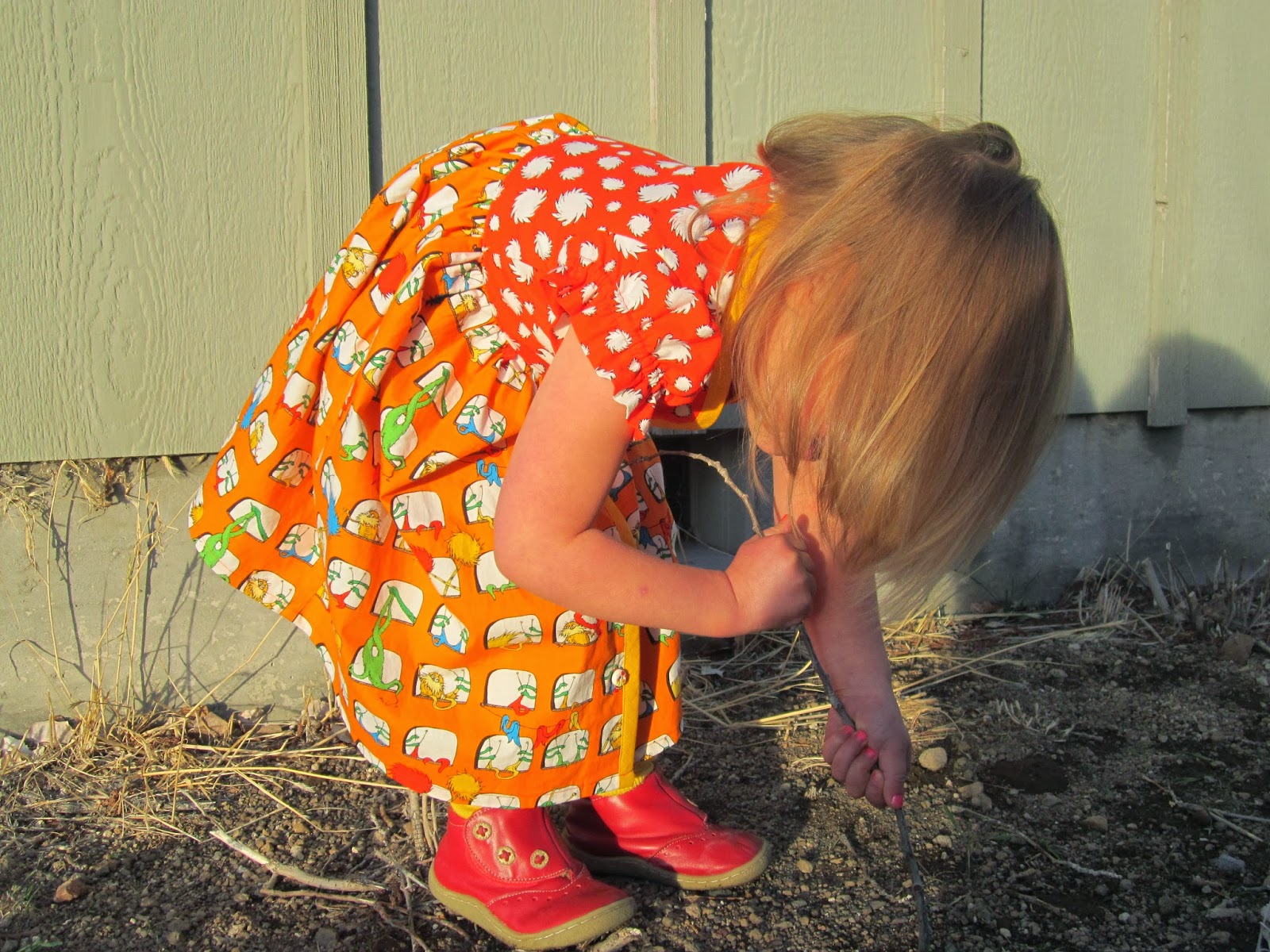 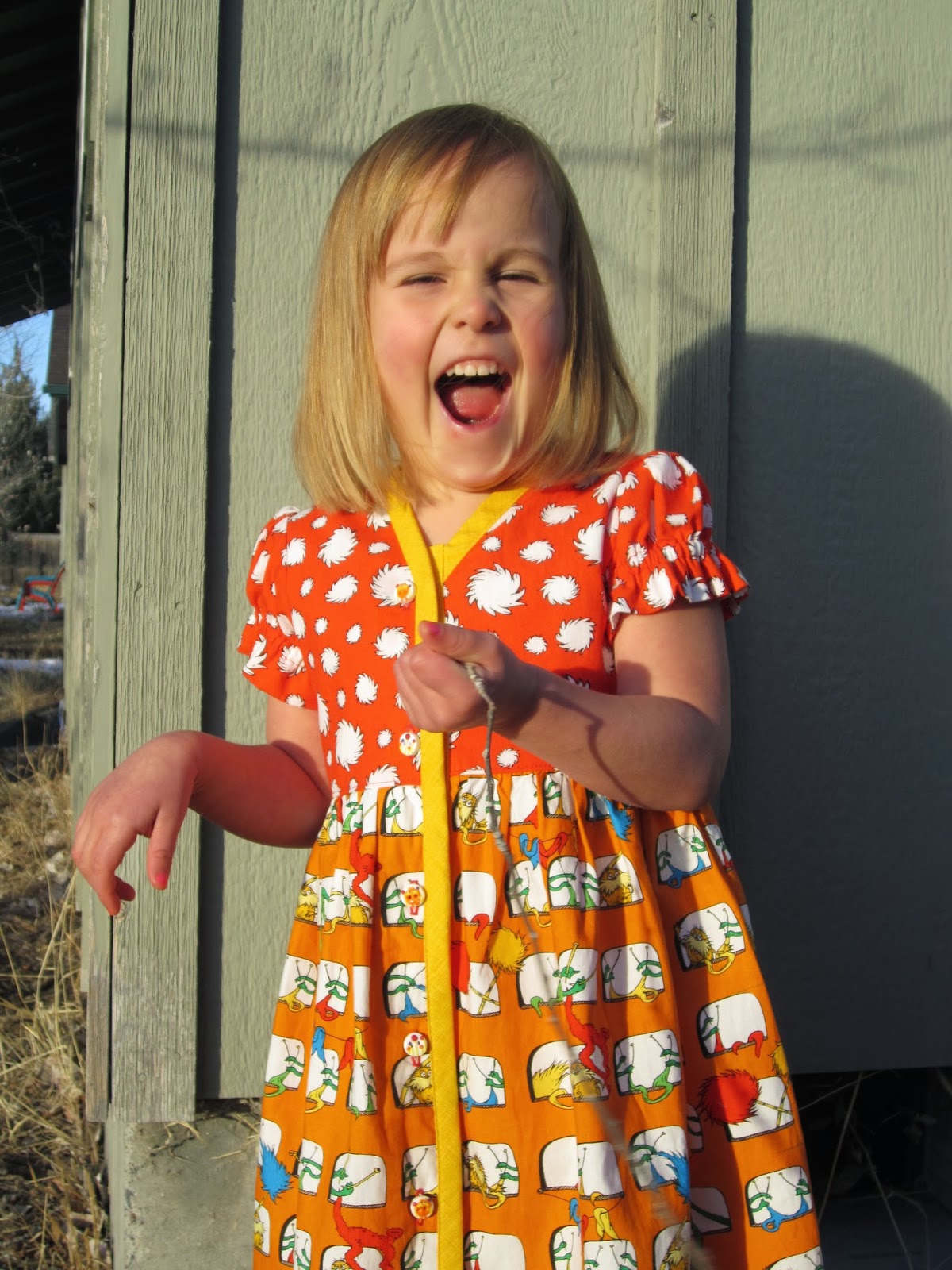 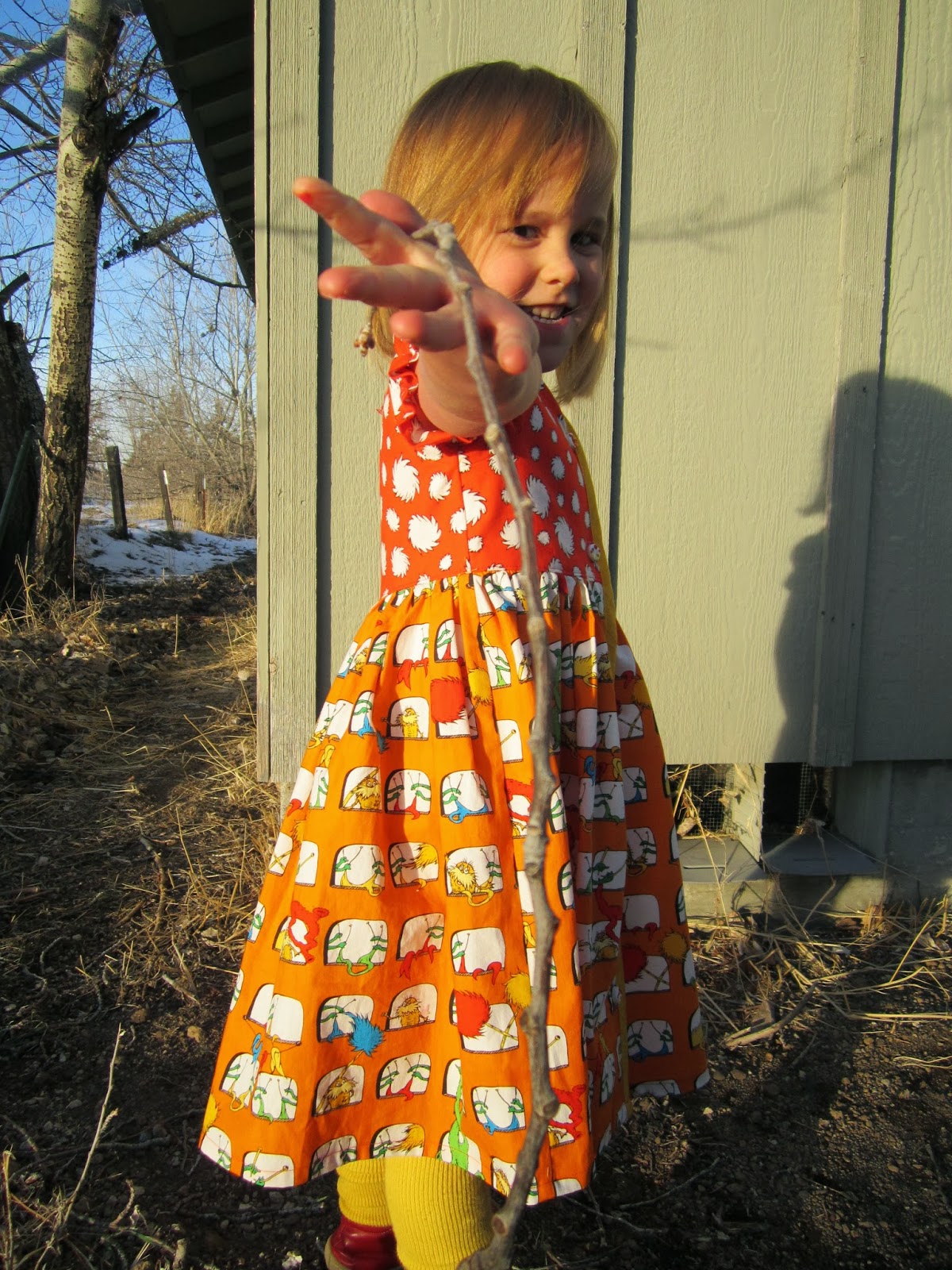 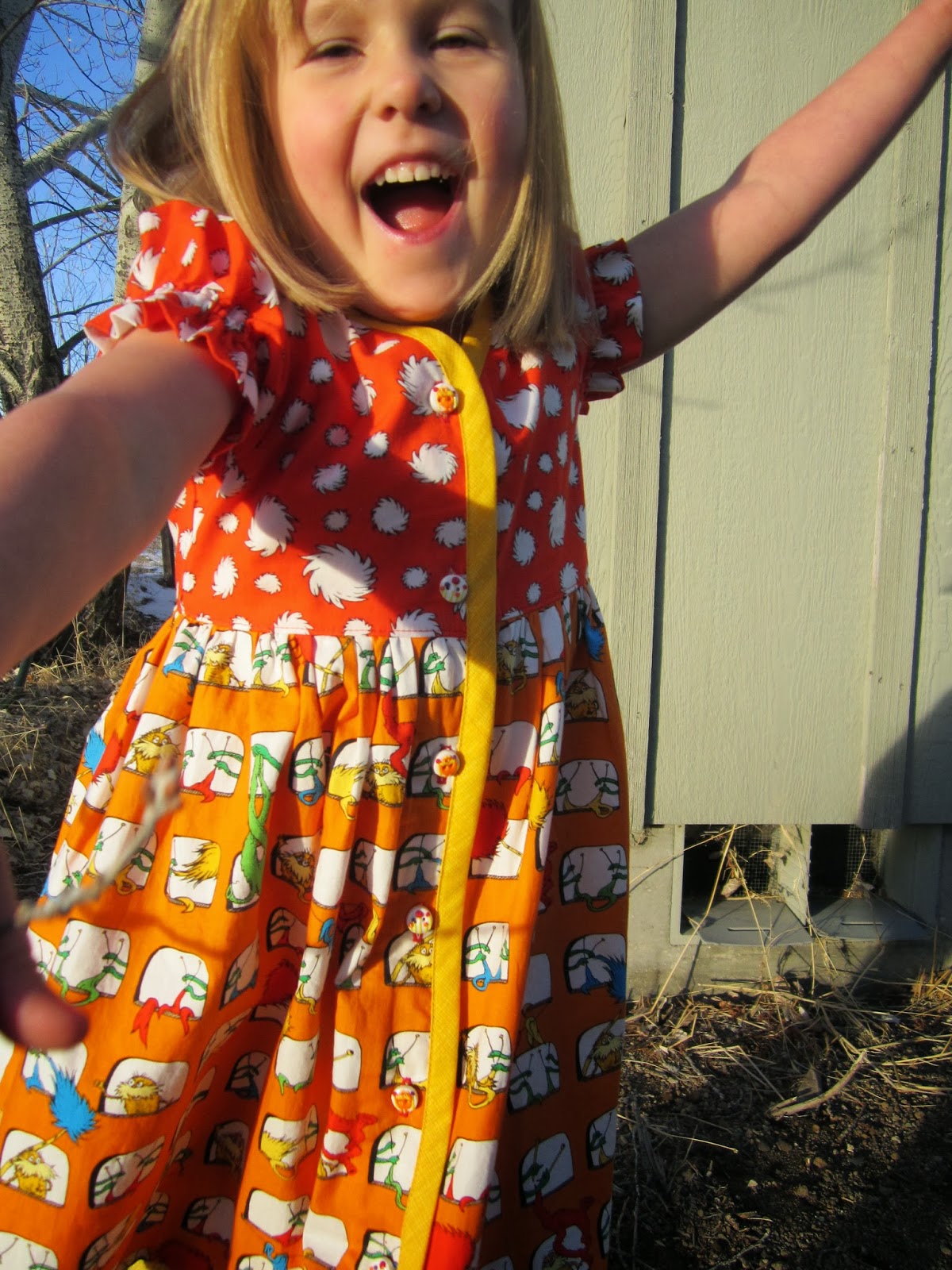 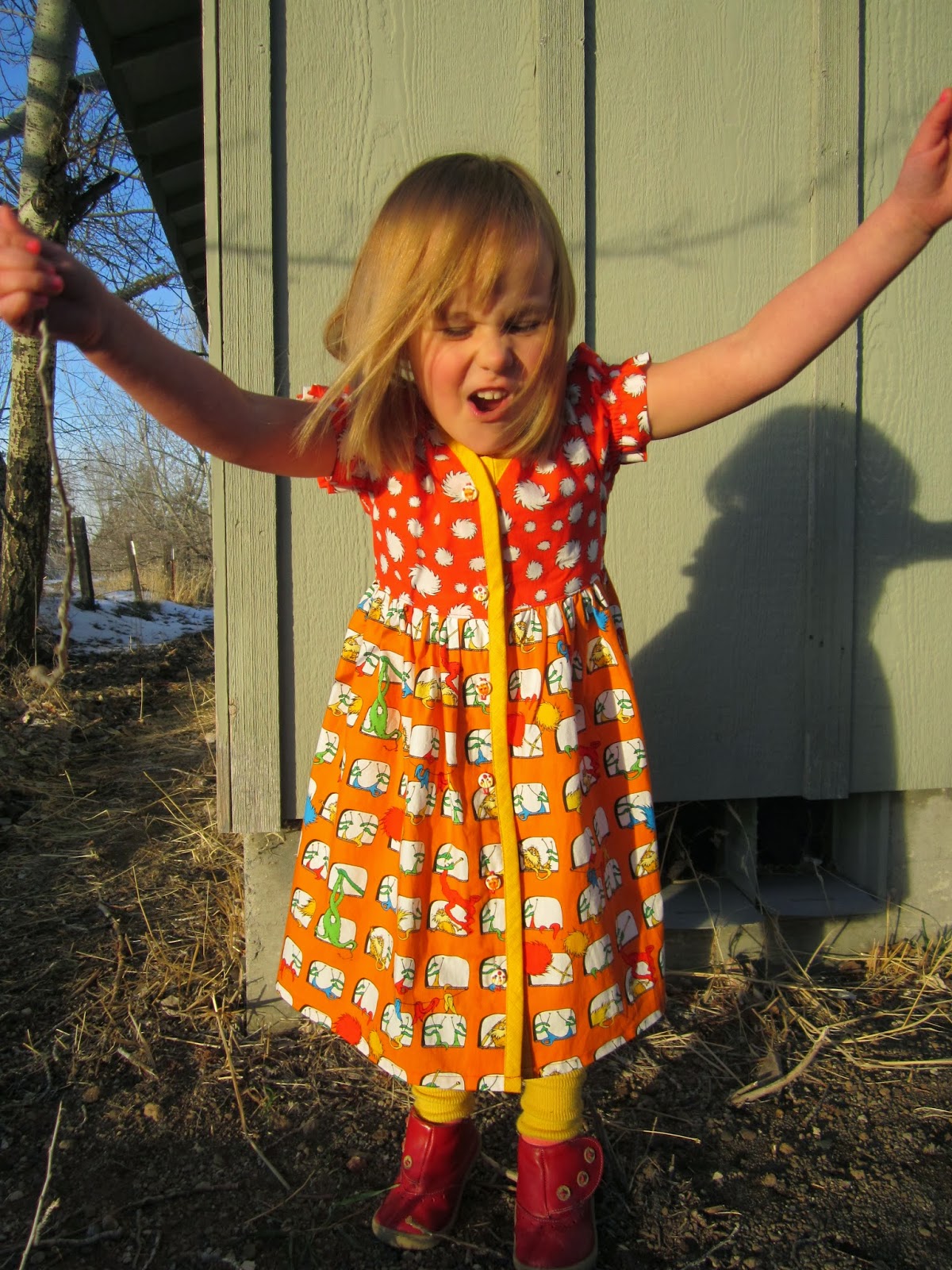 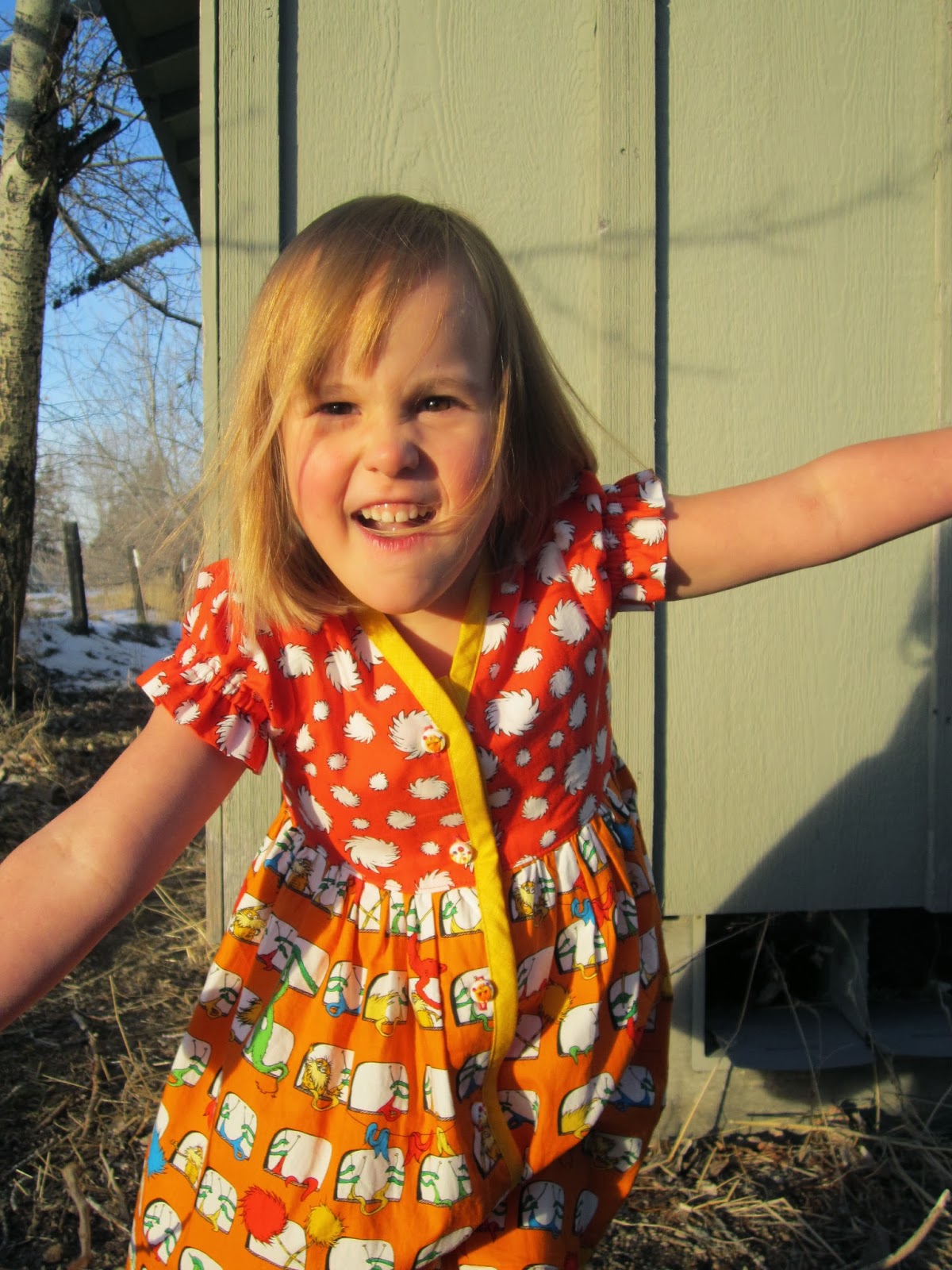 And.....looking at these last several pictures, you can't TELL there is snow, aha!  Maybe a wee bit ;)

Posted by cottington at 4:20 PM