Sage Blooms and Winter Blooms: A Tale of Two Knits 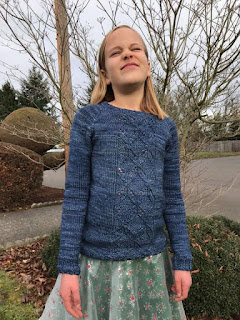 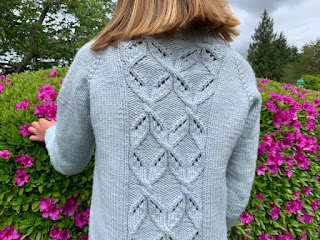 Wow!  How has it been a year???  A summer of fun in the sun, followed by months of fun in the rain and snow, and here we all are, during the crazy time that is 2020.

Once upon a time, back in November, Erica Sufka offered a test knit for her pattern, Winter Blooms Mini, and I signed right up, knowing I had other things to knit and sew, aha!!!  But it worked out, as it's one of my daughter's favorite sweaters!  Camden loves her cabled sweater, and honestly, the pattern was a relatively quick knit, whipped up in Hazel Knits Lively DK in the colorway Blueberry.  You can likely see the line where I changed colors, as I apparently chose NOT to alternate.  I have no idea how I fell into doing that, as it was back in November of 2019.  At the time, Camden was 9.75 years old, and I knit the size 8, as I figured the chest size would better suit her, and it did! 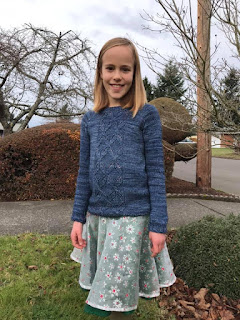 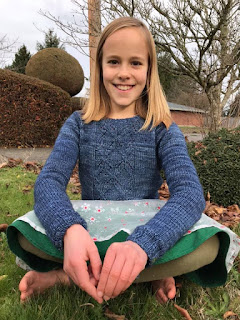 Fast forward to last month, when Erica announced she was starting a test knit for Sage Blooms, a cardigan version of the same cable pattern - yay!!!  Again, I knew I should be doing other things, but it was so pretty, and Camden was totally in the market for a new cardigan, for real!!  In this case, the pattern runs down the back, and it has a nice band around the sweater, no buttons added!  The version I knit up is a bit on the long side, aha; I'd temporarily forgotten Camden is somewhat short, and it's one of those cables where you have two different stopping point choices.  I went with the full chart repeat, rather than halfway down, when I should have done the reverse.  Because of this, I ended up knitting the sleeves long.  But... I sadly thought I'd knit the armscye long enough, and I didn't.  For this reason, the sweater might not fit as long as I'd like it to fit her. 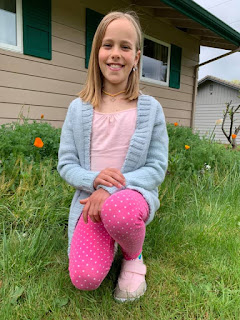 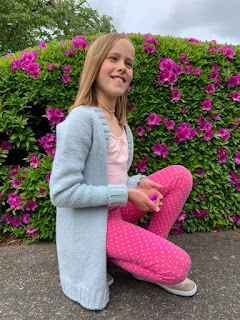 But!  On a happy note, Camden picked the colorway, Glacier, on Quince and Co. Osprey.  I purchased the yarn from Twisted, a local yarn store I am sad to see closing (though I think they will continue the on-line shop).  I'm not a pale blue kind of lady, but it's her thing, and it's so lovely!  I loved the yarn a lot, but something to keep in mind with this aran-weight yarn is that it's a dense aran weight, so, at the gauge, it bothered my hands on the needles I needed to use.  I love the fabric, but whew.... my wrist and hand hurts, thinking about it, aha! 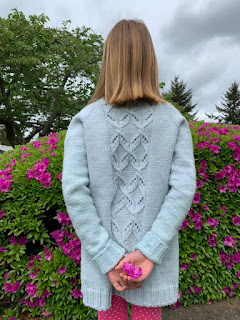 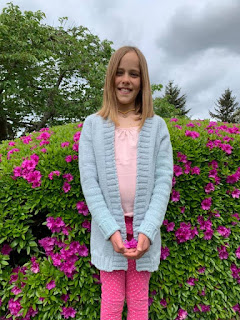 Legit - you need BOTH patterns!!!  Why???  You need them because you get to work with two different yarn weights and enjoy the pattern twice!!!  Erica includes number counts, which I always love, and the chart is an easy one!!  And I promise that if you have a kid/grandchild in your life, along with too much yarn in your stash, then these are the patterns for you!