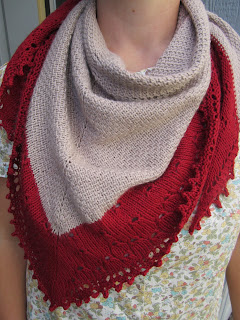 I was super excited to knit up the Windswept Shawl by Molly Klatt of A Homespun House as soon as I saw the pattern release!  Of course.....the starting of it took a while.  I just couldn't figure out WHAT to do about my yarn choice.  I thought maybe I'd go with some Quince and Co. Chickadee, but I couldn't bring myself to use a solid-colored yarn with no depth - for an entire shawl.  I'm still interested in trying it out, as I know it's a quality yarn and that people love it, but I think I'd use it for a hat for the kids, aha!  I was also interested in trying some Sundara sport weight yarn, but I never happened upon a colorway on sport weight in one of their daily updates (I DID miss out on one stocking that I should have jumped on right away).  I also REALLY wanted to buy some of The Fibre Company's Road to China Light, but I felt badly spending so much money, though the yarn isn't truly badly priced. 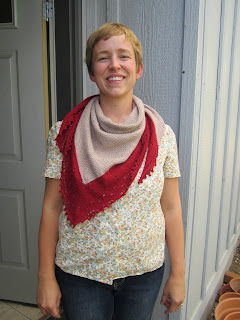 Anyway, I FINALLY decided on Rosy Green Wool in the Cheeky Merino Base - in the colorways Rose Garden and Sand, which I purchased from Warm 'n Fuzzy, who has great customer service.  I'd originally planned on doing the whole shawl in Sand, but I couldn't imagine myself wrapped up in that much neutral color, aha!  I was worried, too, about using the red, but Matt said to go with it, so, I did.  I have a few other Rosy Green Wool colorways on two other bases, which I'm excited to try, so, I was glad to use it for something right away! 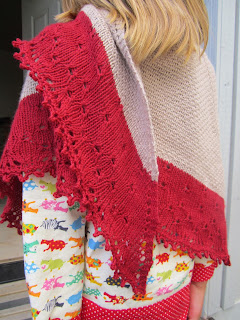 The pattern went along mostly swimmingly - I did create a problem for myself in the very beginning, as I wasn't sure about whether or not to hold my yarn in the back or front when doing a stitch...and then later, I was confused about a pattern direction.  I went ahead at that time, as I figured I was correct - and it turned out I was, and the pattern instructions were fixed in that spot.  I get so nuts about reading directions and worrying, though I know other people just zoom along, not worrying at all, aha! 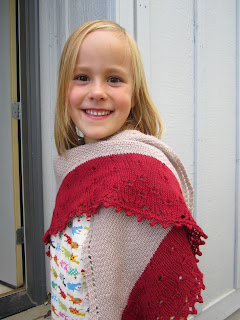 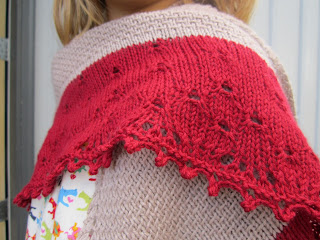 The yarn was definitely lovely, though my hands were - and still ARE - feeling the pain of so much purling and yarn-in-front moves, so, that section seemed to take forever.  I flew through the red edging, and though I was worried it'd be too small, the shawl blocked out nicely.  It's definitely deep enough.  I am interested, though, since I mention it, in doing some more crescent-shaped shawls/shallower shawls, as I'm so short and want to see how they fit.  I'm still bummed my Bryce Canyon came out so small back when I knit that - totally should have gone up a needle size on that one, oops. 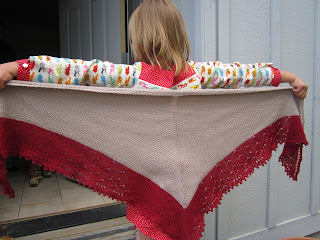 I have definitely entered into a few KALs with this one, though it's a wonder I finished it, as it took me so long to get started, due to the lack of yarn.  Turns out it took me three weeks to knit, which isn't too bad!

Posted by cottington at 4:03 PM