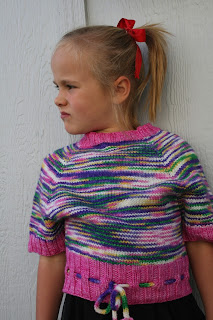 Camden's second sweater of the season is the Paint Me a Sweater by  Elena Nodel.  It was originally published as a free pattern under a publisher no longer in business (why am I blanking on the name???), but it's now offered as a free Ravelry download, which is much better, aha! 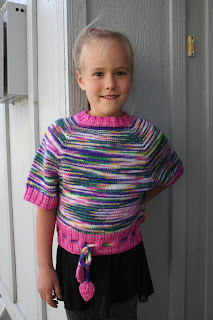 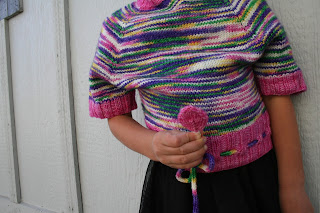 I had liked it when I first saw it, because it seemed a bit hip  - and simple, which is sometimes nice.  I do find that it's a quick knit, in that it's stockinette, but it sadly is hurting my hands to use the size 4 needles, even though they're wood (Karbonz Dreamz...I was hoping to partly remedy the hand issue with wood circulars, but 'tis NOT the case).  I ordered from Handsome Fibers, as I keep doing with my Karbonz needles, and they are AWESOME with shipping super fast!!!  I totally recommend them!  I do definitely enjoy using the needles, but I have such mad hand issues now that it probably wouldn't matter what I DO use. 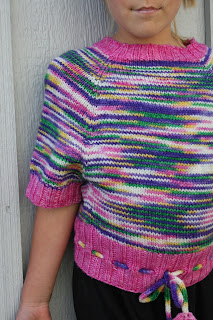 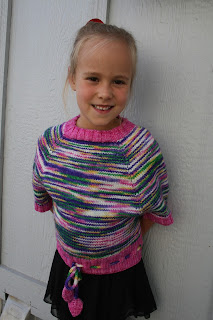 The sleeve increases took my forever, partly because of hand issues, partly because it was hard to sneak in knitting (crazy baby is having a hard time getting to sleep at night) and partly because there are two knit rounds between each increase round.  The sweater doesn't have much length, though, so, that's nice! 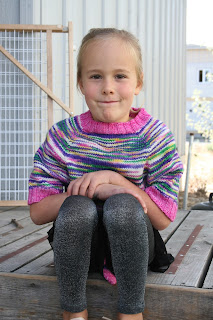 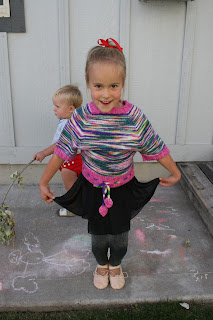 I used Colour Adventures on Dia Worsted in Pinktastic and Irises - both lovely colorways!  The yarn is nice, and I feel I haven't used this base before....or maybe only once.  I have no idea, but I'd like to use it again.  I do like the results, though I wish I'd gone a teeny bit longer, as, because of the design, anyway, it likes to creep up over her belly.  So, an extra inch would have made me happier.  Either way, it's fun, and it works as a ballet top before I finish her actual ballet sweater - also, incidentally, to be knit with CA yarn ;) 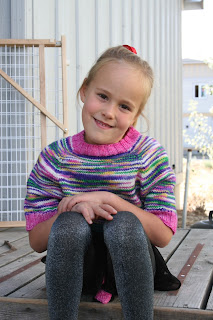 Now....this is what happens when brother attack....

Posted by cottington at 6:59 AM