Not Just a Song: Penny Lane, the Sweater 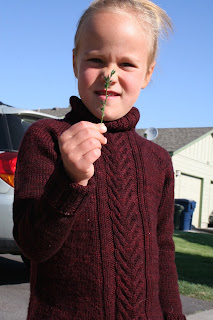 Oh, holy cow.  Has it been four score and eighteen decades since I last blogged???

Feels like it.  I actually swear I have a pair of socks and something else I need to blog about, but the dog days of summer blew past AND dragged on, if that's possible, and I have done NO sewing.  So, in all actuality, DARK days.  Camden has no clothing for the fall, other than a few dresses.  Thankfully, she just wears swimsuits and leotards all summer, so, we've been golden so far ;) 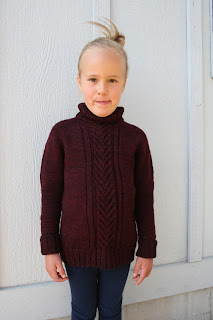 But check out, peeps!!!  What a fun sweater (project page here)!!!  This is one of those great yarn, easy pattern, lovely outcome sort of posts.  The sweater is obviously meant for the coming months (not sure why I chose to do a short-sleeved sweater AFTER this one, LOL), but I'm glad we're ready. 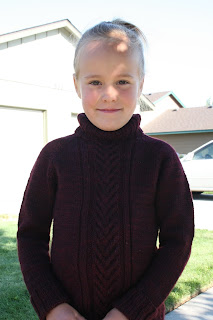 The pattern is Penny Lane, by Julia Stanfield (Facebook page here).  I'm belatedly noticing that she has a sale in her Ravelry store with code "k2tog kal" - if I publish this today, August 13, go check it out!!  It's a pretty simple pattern with cable work down the front, only.  I did find the needle requirements written sort of loosely, so, I wasn't sure which needles to use where, only because I'm weird, I think.  I originally tried the neck on a smaller needle but went up to a size 5 and did the main sweater on size 3 needles.  My only issue with the pattern is that the sleeve count at the split is too high - in my opinion.  I think it's too much positive ease, and I wish I'd thought about that/realized that before I was as far in. In the end, I went with laziness, but I super decreased those sleeves.  In project pictures on Ravelry, you'll probably notice other people knit looser sleeves, but I don't like them baggy on the forearms.  The sweater is definitely meant to be knit as a tunic, when it's knit for girls, but I knit it a bit shorter - in essence of time and hand-pain. 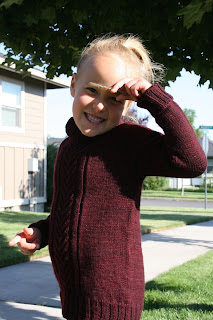 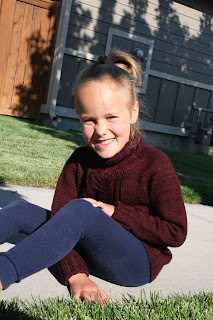 My yarn is Colour Adventures, base Dia Twist DK in colorway Raspberry Chocolate (I also just checked out her store, and she has a lovely green gradient worsted set in stock!), and it was super lovely to knit up.  It's definitely tricky to get the colorway across correctly in the pictures.  I always recommend Elena's yarn, and she does co-ops a couple times a year, where you can pay less for her yarn, which is awesome. 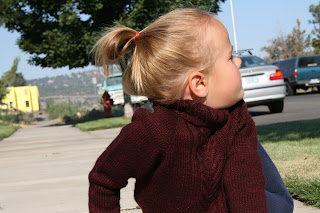 Nothing much else to say - other than crazy photos, due to light and a kid who doesn't care to pose these days ;) 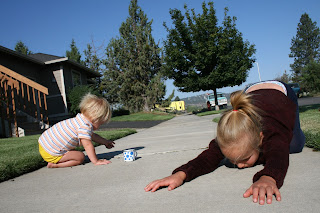