A Figgy's Ofelia to Get me into the Sewing Spirit!

Sometimes it just goes this way....one crafty thing taking a backseat to another.  This has happened with sewing since just about one year ago, when THIS little guy was born.....
I knew it'd be tricky to squeeze in sewing time when Tiberius came around.  He is semi-like his sister in that he doesn't always take a great nap....though to be fair, his life is a busy one, because he is always taking one for the team - as in, his sister has activities, like story time and dance and her cool classes with Megan Strong over at Playful Learning (which, by the way, Camden LOVES, and if you live in Bend, you should send your wee child!)  Here are some examples of the fun she has!
Anywhooooo...So, I make up a lot of excuses when it comes to sewing - things like, "Tiberius is stalking me," and "It's too late; I just want to chill with some knitting and a knitting podcast," and "I only have five minutes, so, I don't want to start anything," and "Ugh, we were busy, the baby took a half-hour nap, and when I finally finished playing card games with Camden, it was time to whip up a smoothie for lunch."

..............So, you know, life and excuses, excuses and life.  I totally AM that person, though, the one who hates starting something if I have but a few minutes.  I understand that doing certain tasks during key moments WOULD help, though - things like tracing while the kids are playing, getting materials prepped.  I figure there is a lot of time-wasting going on on my end, though I often legitimately have a baby boy who doesn't want to go play or sleep for a solid two hours.  He IS the cutest thing, though, right???
And...back to sewing!  Last week, I finally managed to fit in some time.  I made sure get some tracing done early in the week.  I planned for several projects, searching through fabric, etc.  I did note again - a failing in my stash acquisitions - that I don't have enough coordinating fabric (well, besides the other failing, which is 1/4 yard and 1/2 incremements of some things...what was I EVER thinking???) for so many "main" fabrics.  I have that Superbuzzy order on the way, but I definitely wish I was more prepared for full-on outfits for Camden. 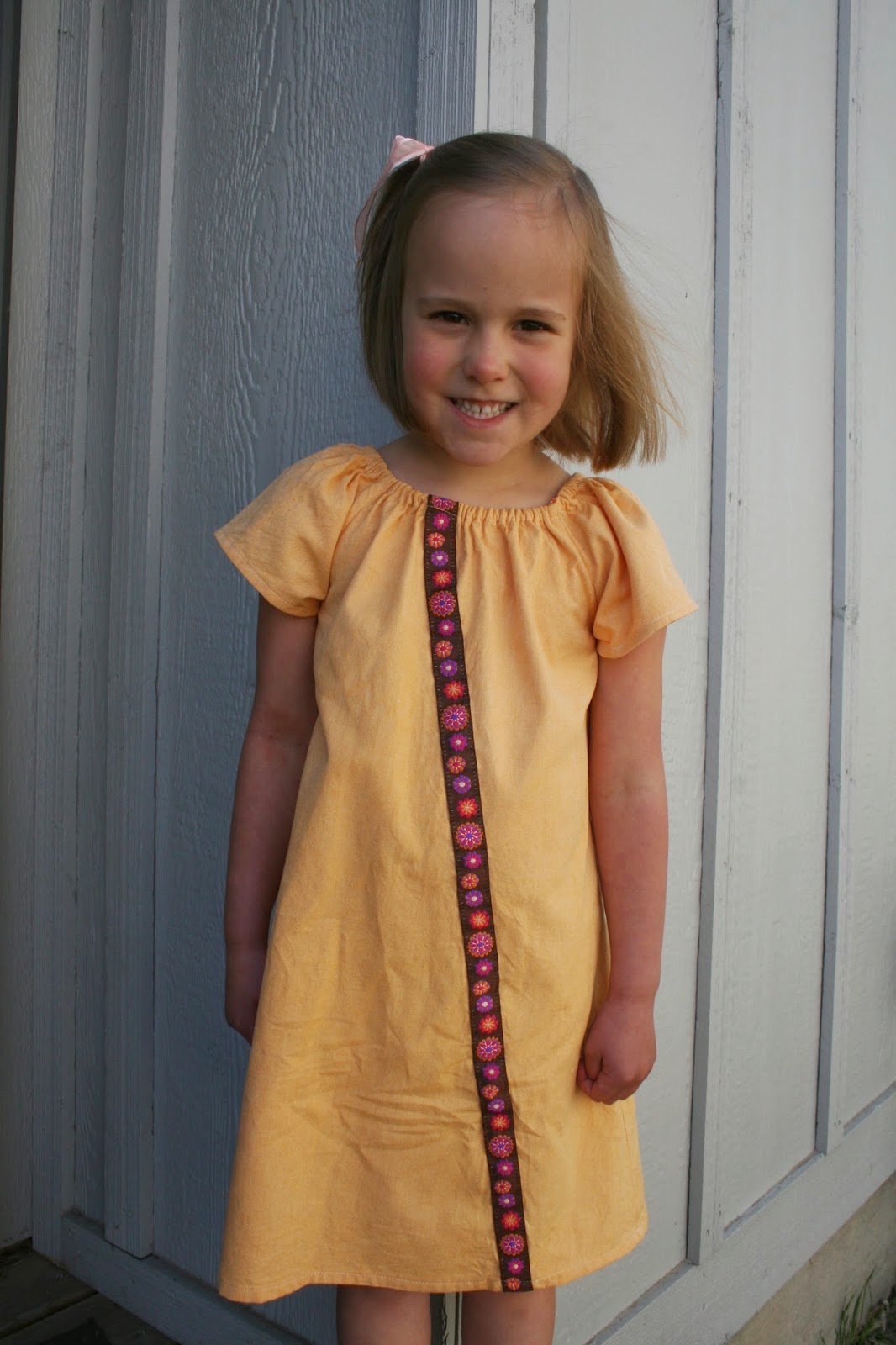 I thought I'd ease into sewing with a basic, but cute project - the Figgy's Ofelia.  It's an OLD pattern and no longer sold - unless you can find a paper copy hiding around in a sewing shop somewhere.  Camden has had a few of these, and I've sewn a couple for her cousins, too.  It's such a blank-slate sort of pattern that you can jazz it up in so many ways.  I, clearly, haven't done that, though I can see the possibilities, LOL. 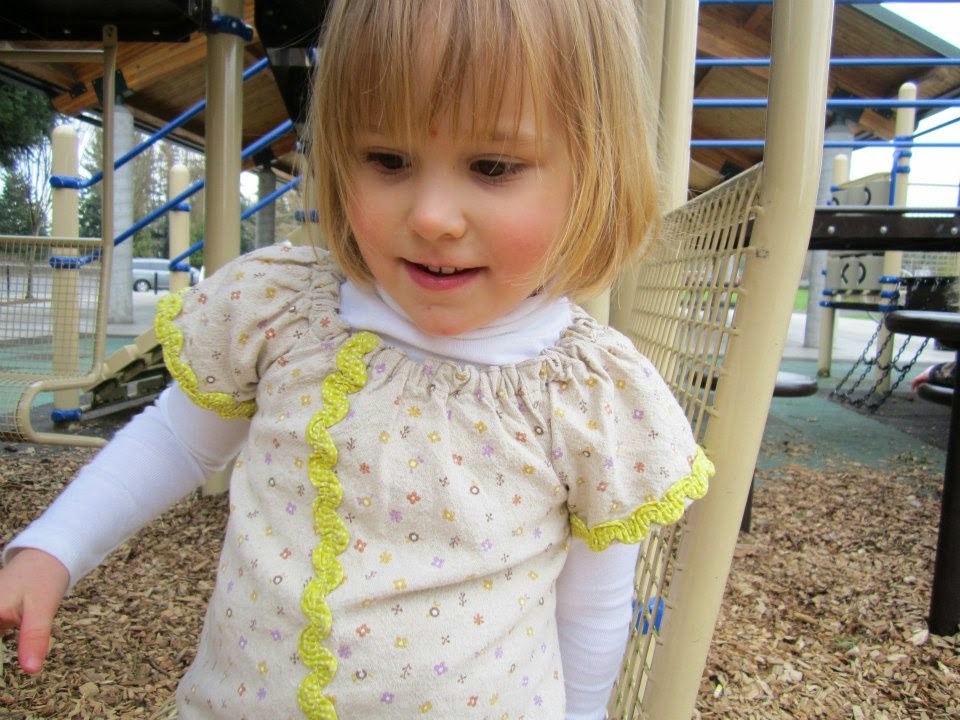 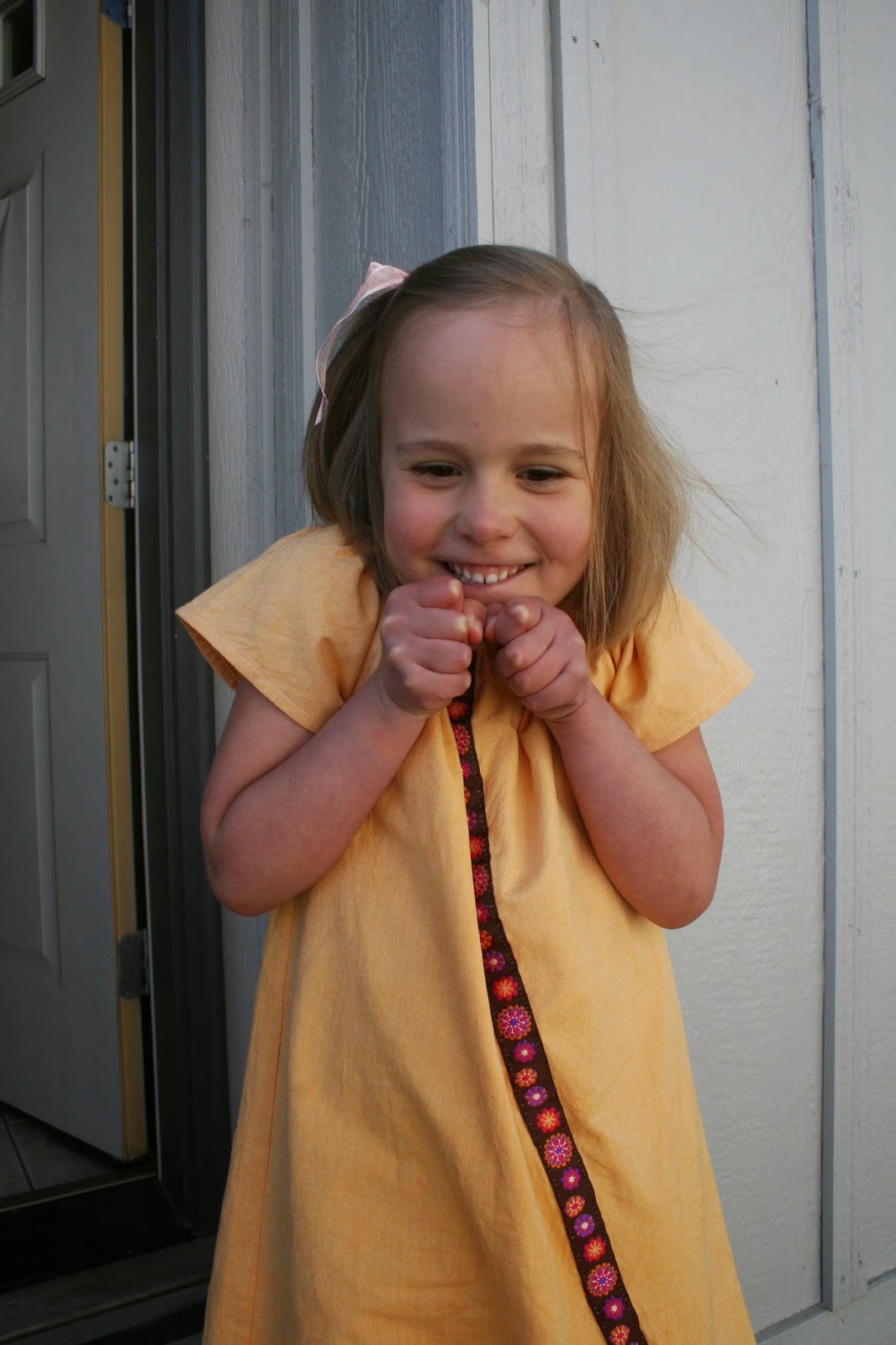 I used something I purchased at Bolt last year - totally blanking on the line or fabric type...is it maybe a chambray???  For the neckline/elastic casing, I used the orange polka dots I used for Camden's last Oliver and S Class Picnic that I'd sewn, and I took a peek through my ribbons and found one that worked.  That's it, folks.  Easy pattern - it's only three pieces (unless you do the bloomers, too), and you can whip it up fairly quickly.  It DOES call for French seams, which you can ignore or not.  I did them, so it's pretty inside, too ;) 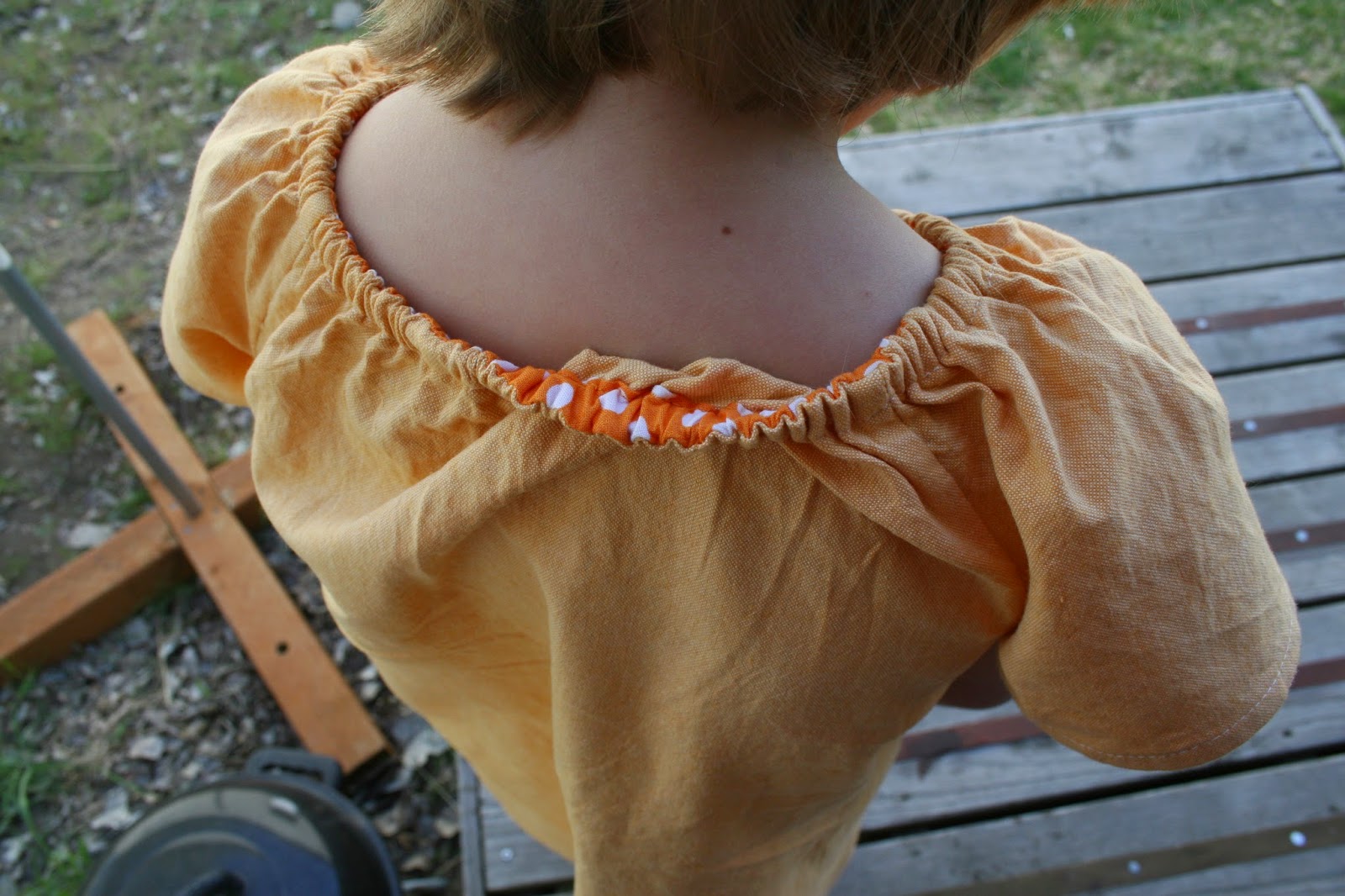 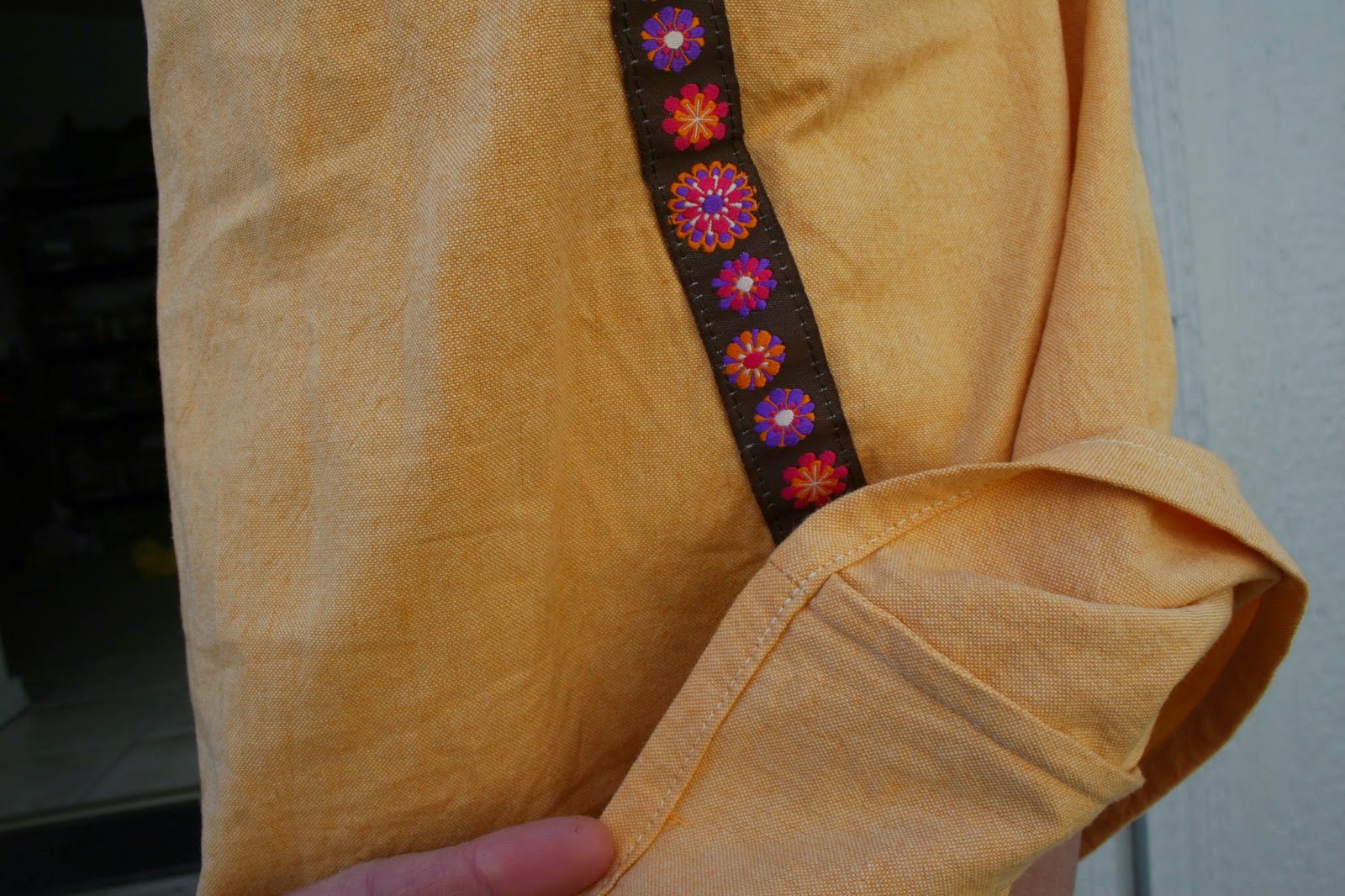 Posted by cottington at 7:15 AM