Tricked into a Vest, Via Harry Potter: Thanks, Oh Loops! 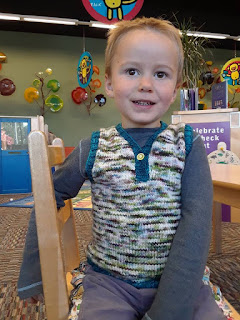 I have been wanting to knit Tiberius a Benedick and Beatrice vest for MONTHS, y'all.....But tragedy of tragedies:  Tiberius was adamant that he did NOT want a vest. 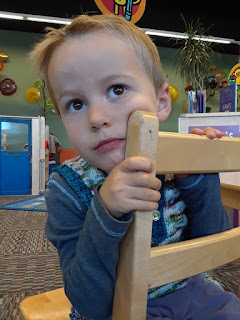 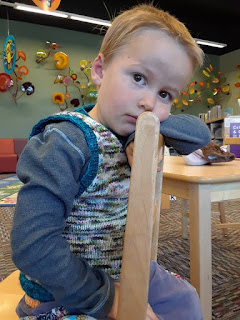 We all have that kid...the kid who has an opinion.  WHY?  I think a big part of it, honestly, is that he knows things like Batman and Darth Vader and owns clothing from Hannah Andersson that features those characters, as I maybe mentioned in my last post.  Camden wasn't exposed to these sorts of things at such a young age, and I always knew my reasons for that were sound, because, well, case in point.  But he's also quite specific about his outfits, so, he'd likely be this way, no matter what. 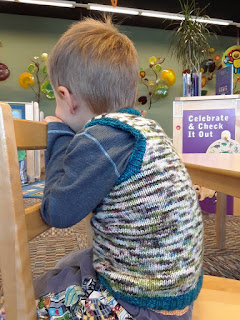 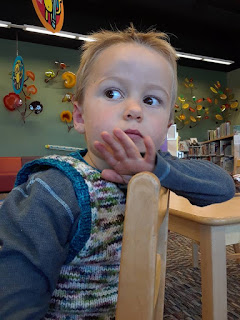 As his knitting mother, though, I have an opinion, too, aha!  I insisted he needed a vest, and I knew I had yarn for such a thing:  Oh! Loops yarn!  I purchased the yarn back when Lydia and Sarah were still dyeing together, and I NEEDED the Harry Potter colorway on the merino worsted base.  I'm not sure which lovely lady dyed this colorway, so, you'd want to check with both Oh! Loops and Gracelynn Wool, Sarah's new dyeing shop.  Anyway! 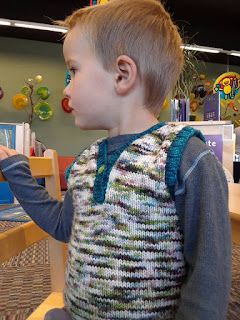 My friend, Laura, designed this pattern back when Camden was but a wee thing, and a knitting friend had knit up the lovely Mosaic Moon version below for Camden, but I myself had never actually knit the pattern, because there are SO MANY things to knit!  I clearly plan to knit another quite soon, as it is only sized up through a 23-inch chest size, and it used almost all of the one skein of main colorway I had.  AND.  You need to knit her Rhino Romper if you have a baby - OR the Toasty Sleeper!!!  The patterns are crazy easy and super cute!! 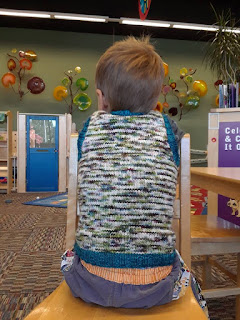 But I digress....go knit this pattern!  It's super easy, clearly, and way cute.  It's weird, as I had searched for vests for Camden, because she'll need something larger, and I honestly couldn't find anything that was simple and plain-ish that I liked, so, this totally fits the bill if you are looking for something to feature the yarn, especially those fun single skeins you want to use up!  Laura spells out all the directions nicely, and even the size 4 knits up lickety-split!  I ended up using a size 4 needle on the main body and on the neckband, but I did size down for the armholes and the hem....just for funsies!  I do wish I'd knit the ribbing as long as the pattern said, but I was worried I wouldn't have enough contrasting yarn...why, I don't know. 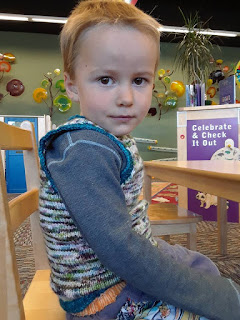 You can clearly tell my photo quality still isn't great, but this vest was slightly easier to photograph than the last few makes for Tiberius.  I had decent lighting, which helped.  And it happily matches well enough with a pair of Treasure Pocket Pants (Pattern found in the Sewing for Boys book!!!) I made Camden years ago, so, double score!!  Watch the blog for the next wee vest....coming soon!

An afternoon in the life.... 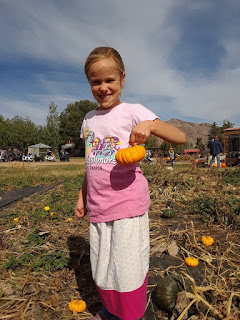 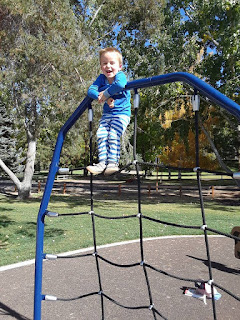 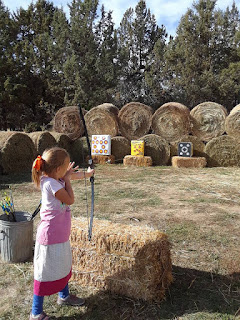 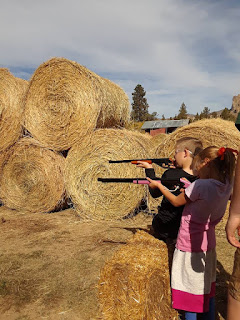 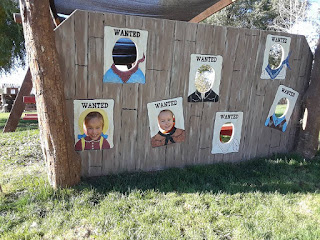 Posted by cottington at 9:44 PM