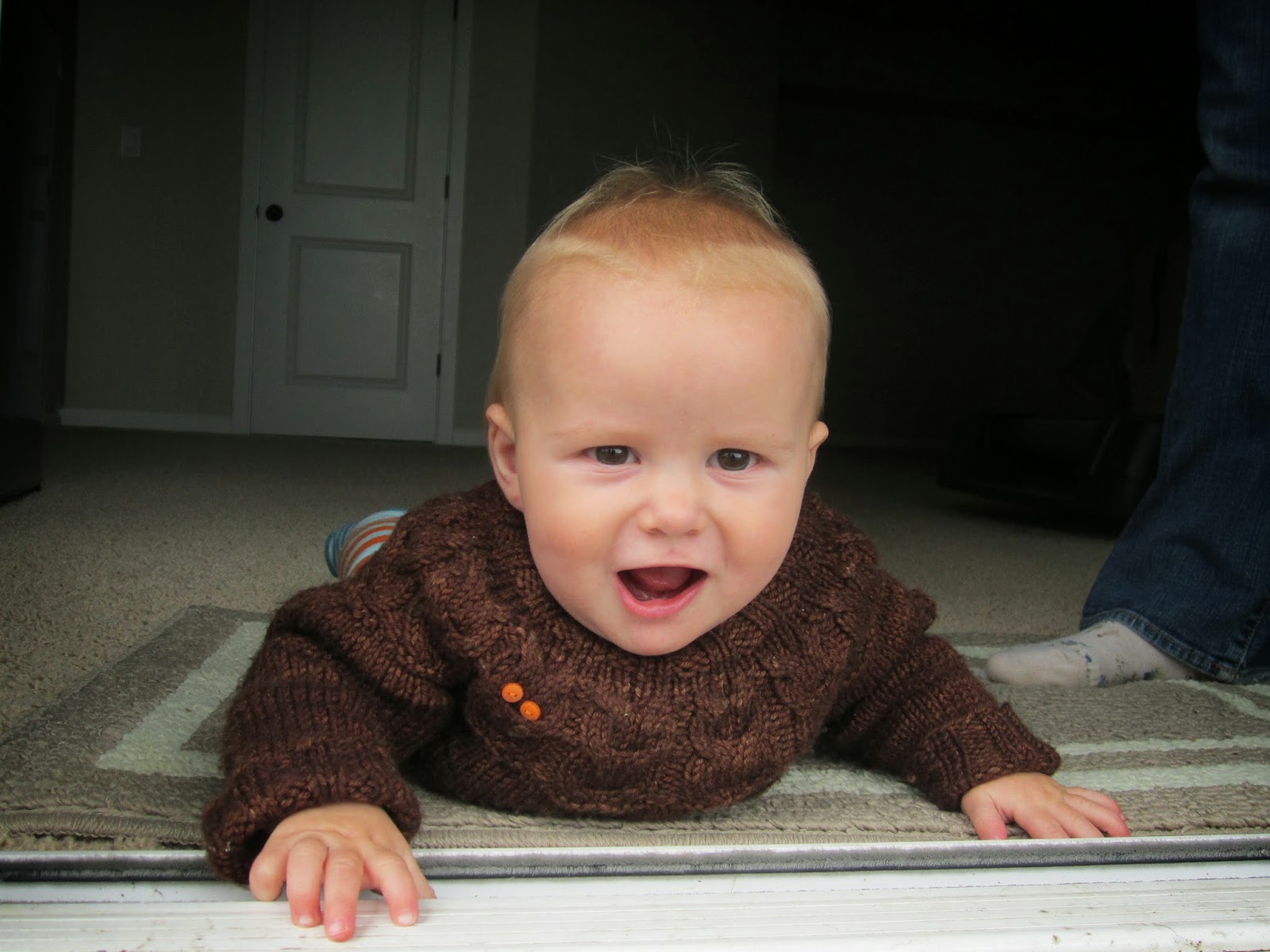 (FYI - the post below was written MONTHS ago, aha!  I am just now posting this, and I'll try and insert pictures from when I first knit it until more recent times to see if there's a difference in growth!)

I am insanely excited about these sweaters - for a few reasons.  They're clearly super cute.  They were knit out of Madelinetosh, which I love.  Lastly, they fit as well as can be expected, when I'm always lengthening/hoping for the best (as in, I gotta make these sweaters last through the winter!). 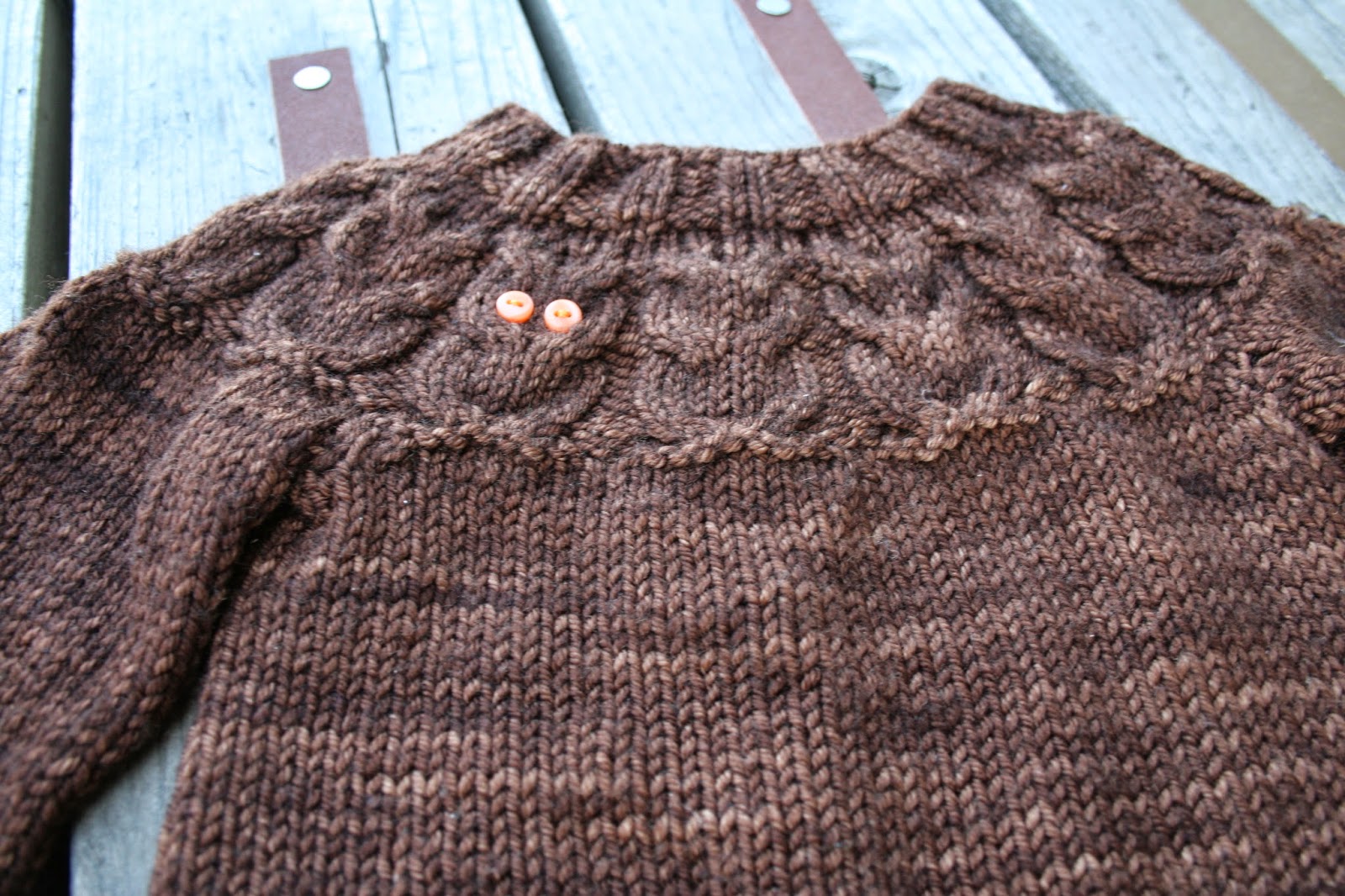 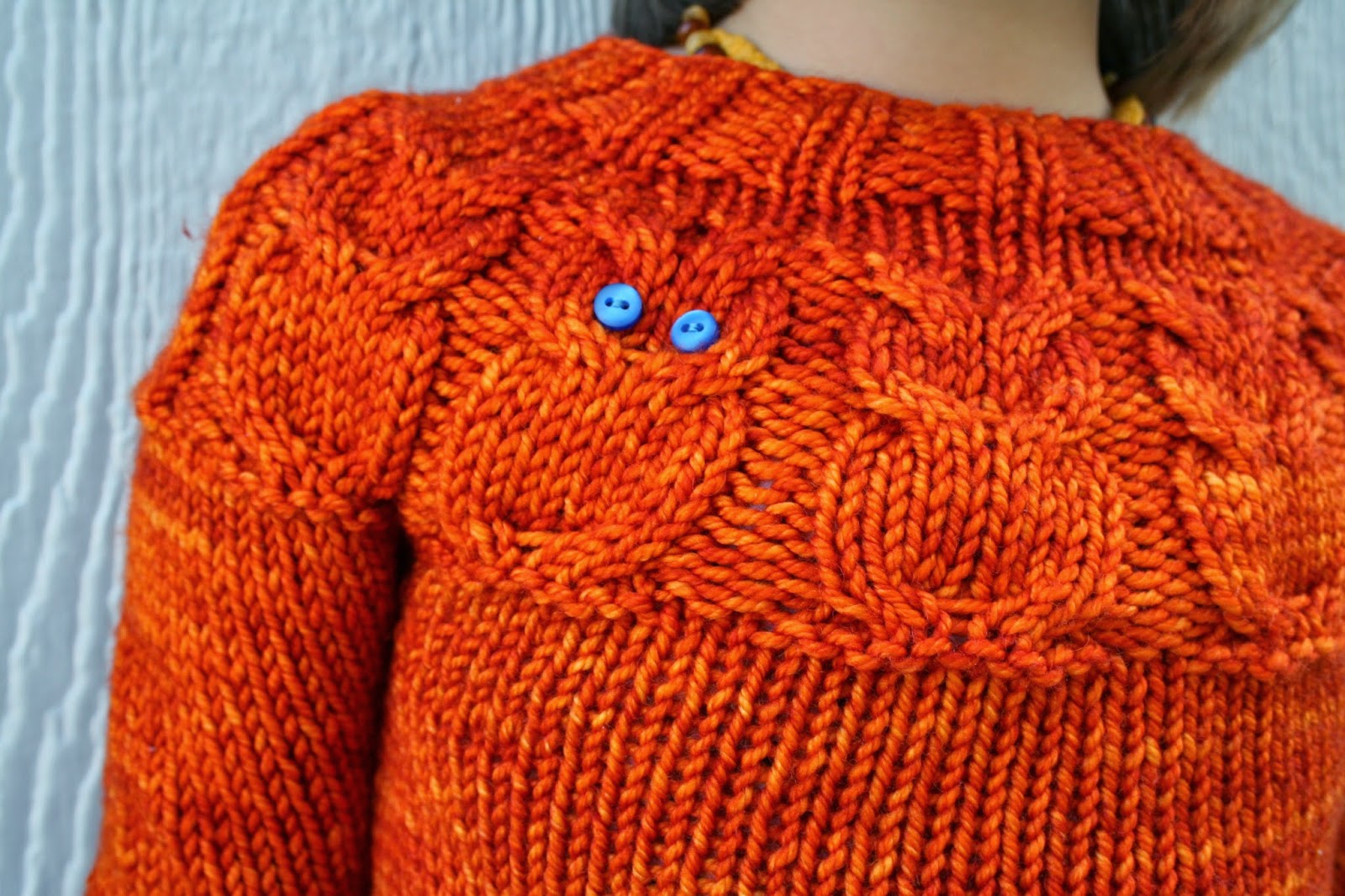 The pattern itself, found on Ravelry, of course, is super easy.  You knit in ribbing, then in stockinette, from the bottom to the armpits.  This was my first bottom-up sweater, though it was Karly's third or so. The stockinette portion goes quickly enough, and I actually had Tiberius's sweater done months ago, but I didn't like how long it was, so, I ripped out a portion of it, which meant re-doing the cables, etc....which also meant waiting until late July to get back to the sweater, LOL. 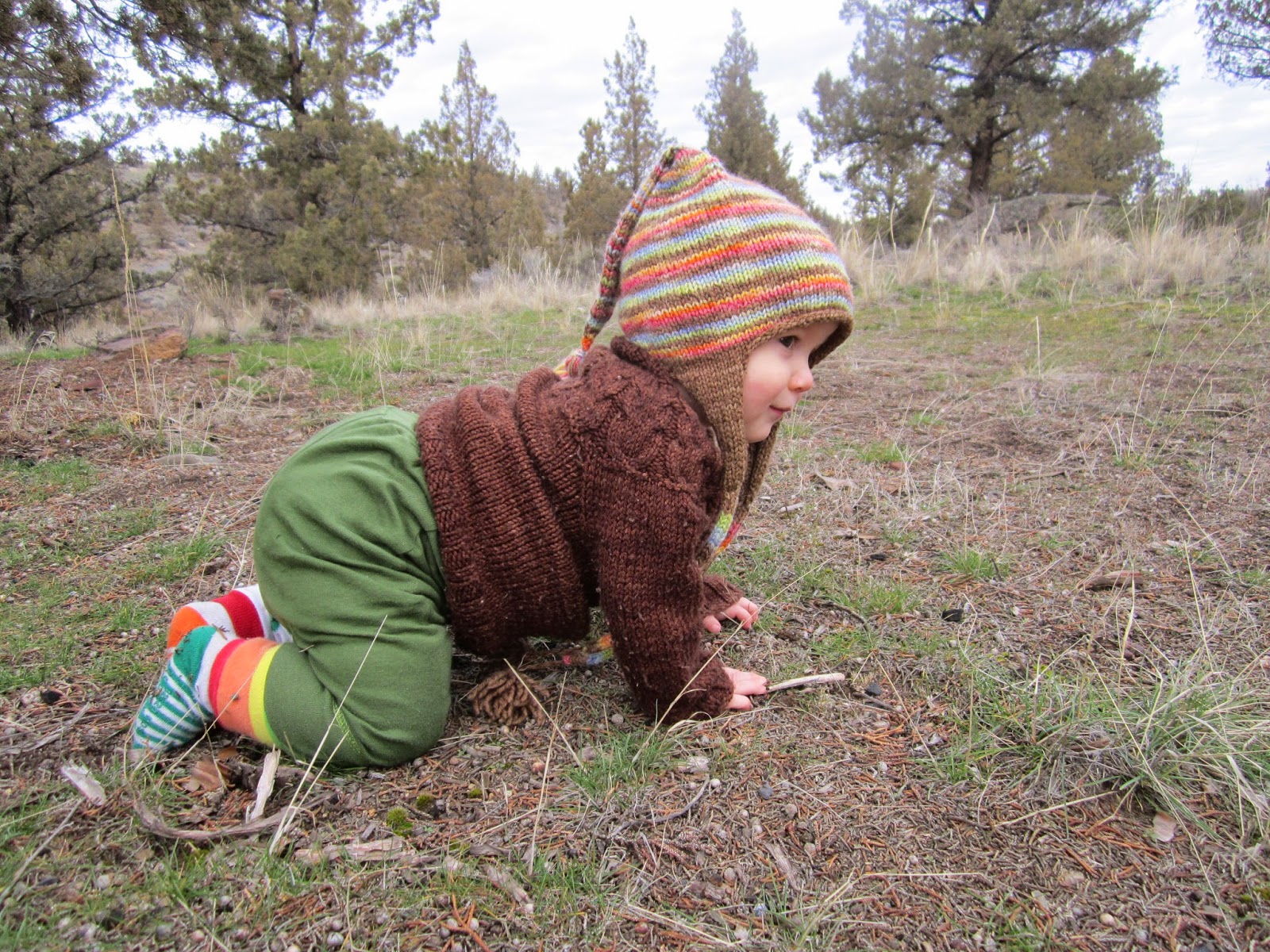 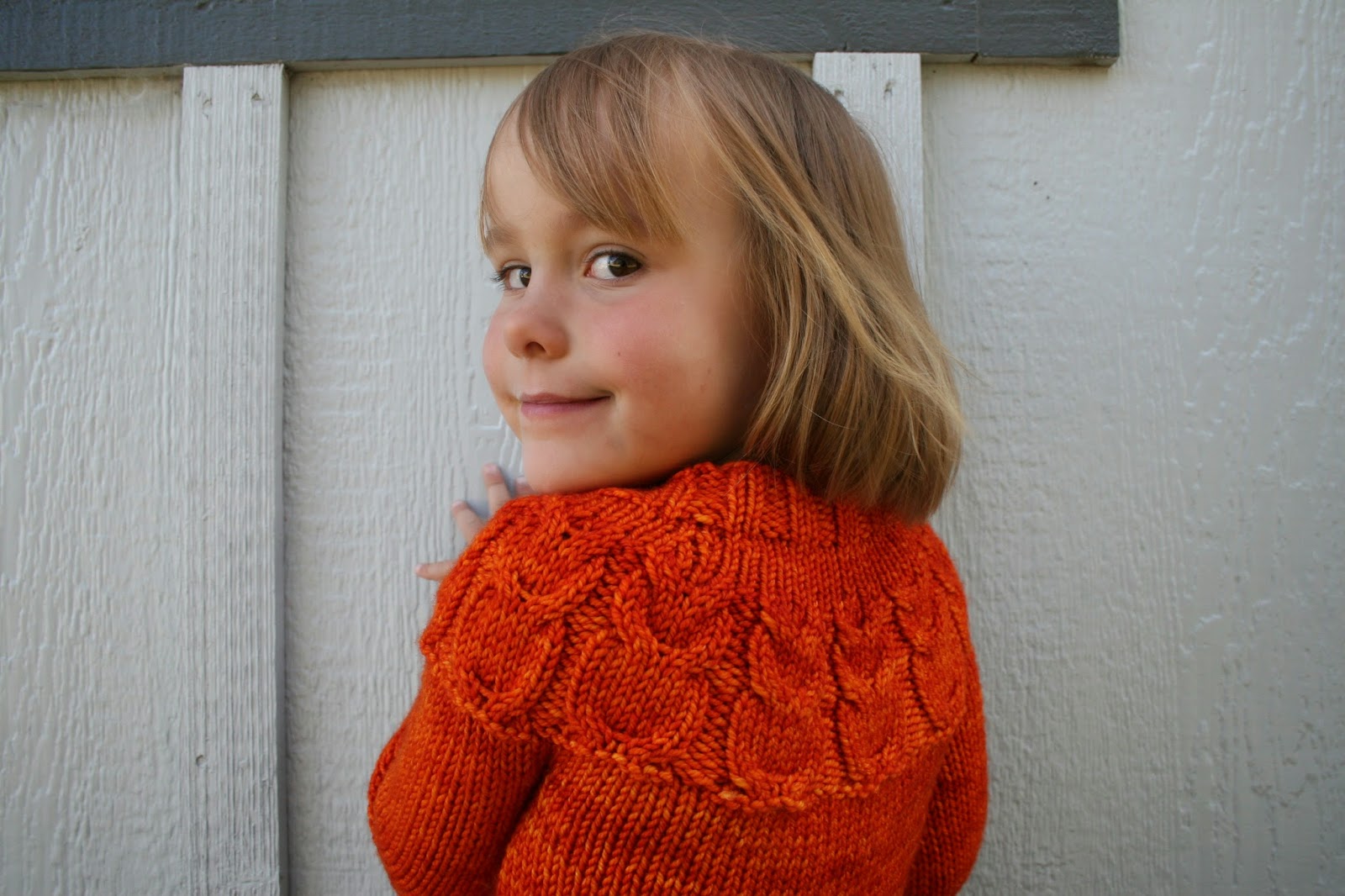 I did fret quite a bit about the sizing on Tiberius's, as it's tricky to plan ahead for length on the torso and arms for a wee baby.  I originally wasn't going to get action shots on him, but as it turns out, the sweater isn't too shabby on him at this point - clearly a bit long and wide around, but it seems porportioned correctly, which makes me happy.  Camden's is just a bit long in the arms and torso, which is what I wanted - for that extra inch or two she could grow by next February.
As I said, the pattern is written well, though I did change things up on the neck ribbing - I'm not used to needing a stretchy bind-off, as I am a top-down sock knitter, and I've only ever done top-down sweaters.  I believe I added extra stitches to the neck ribbing on both sweaters, and I maybe went up a needle size on the last two rows of ribbing, plus the bind-off.  This worked out well, and the neck ribbing on both sweaters sits well, so, I'm happy.  Other than that, the only thing I have to say is that it DID make me a bit crazy to have all that weirdly tight knitting when the sleeves were joined to the body - which I know is normal but still isn't a good time, aha. 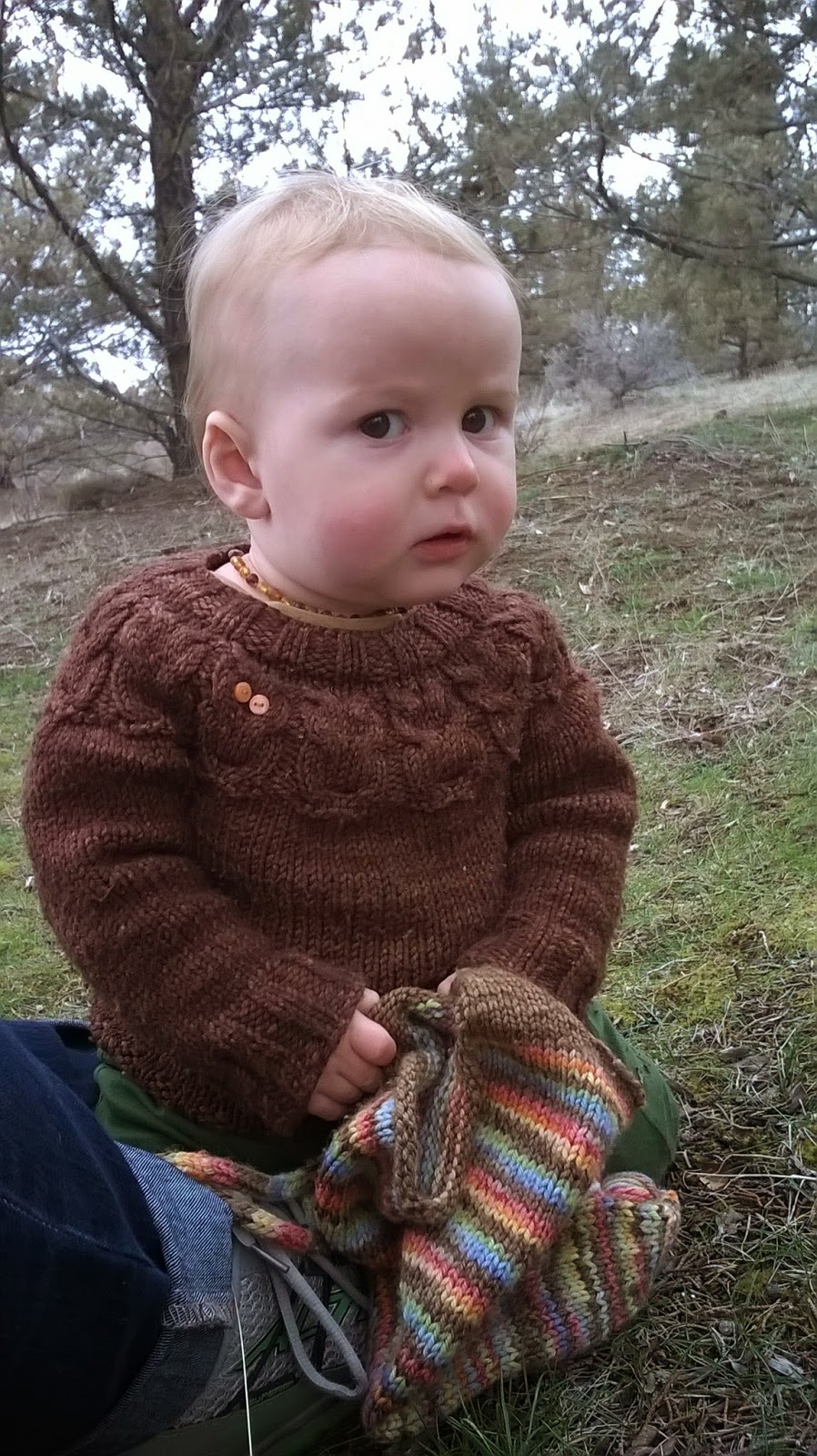 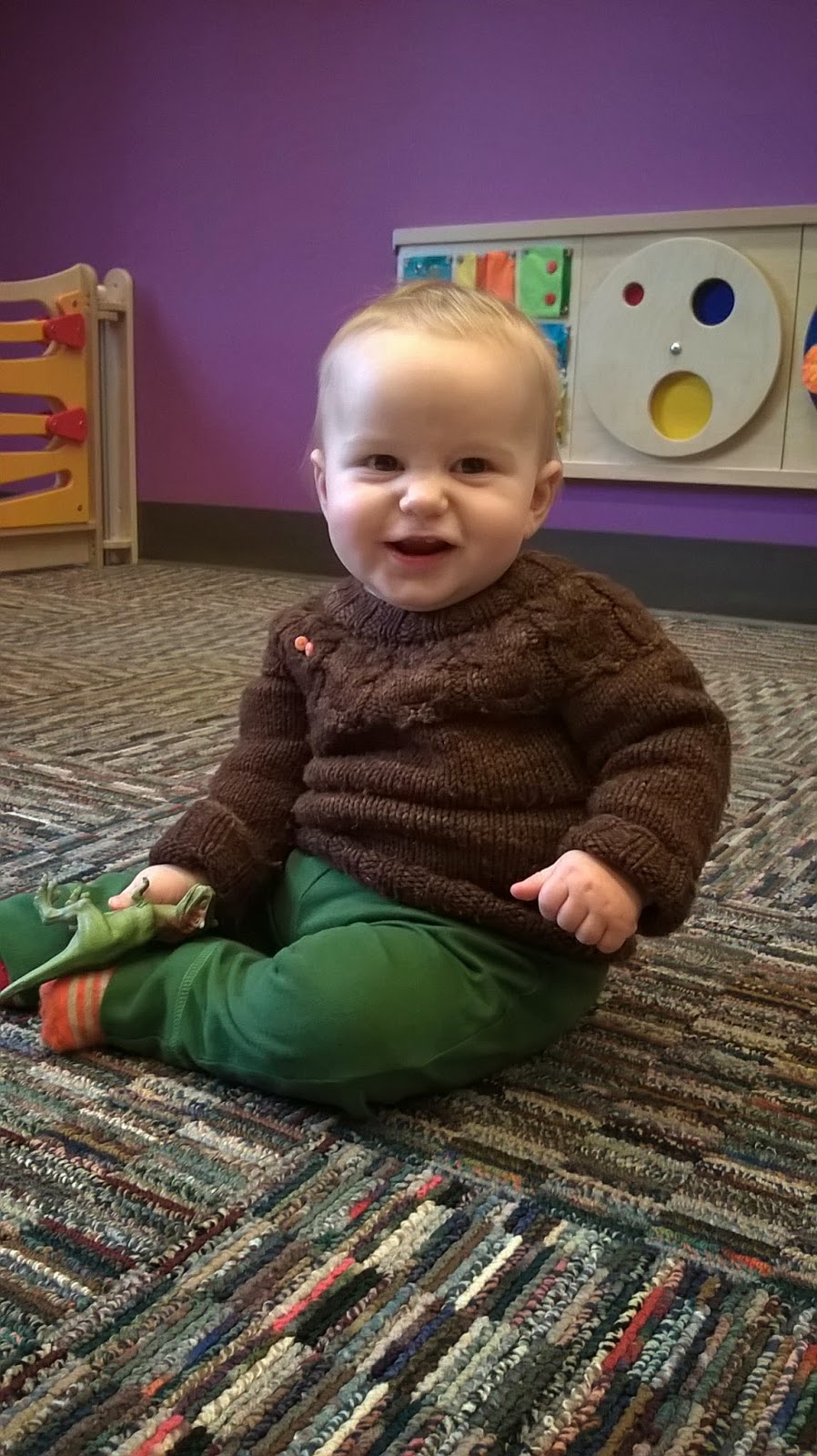 For Camden's Owlet, I used Madelinetosh Chunky in Citrus, and for Tiberius's, I used Madelinetosh Vintage in Log Cabin.  Now here is the BONUS:  I knit Camden's with Tiberius in mind - my plan is for this sweater to double as a sweater for him, too, down the road.  I have a few sweaters in mind that I plan to do that with, like the Carabe sweater by Justyna Lorkowska. 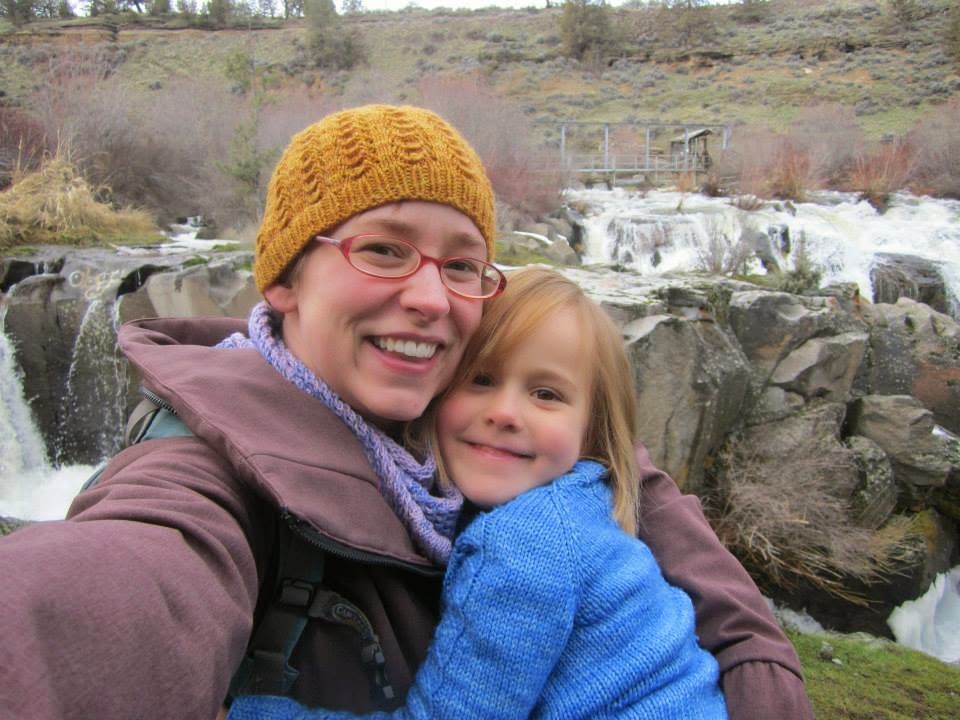 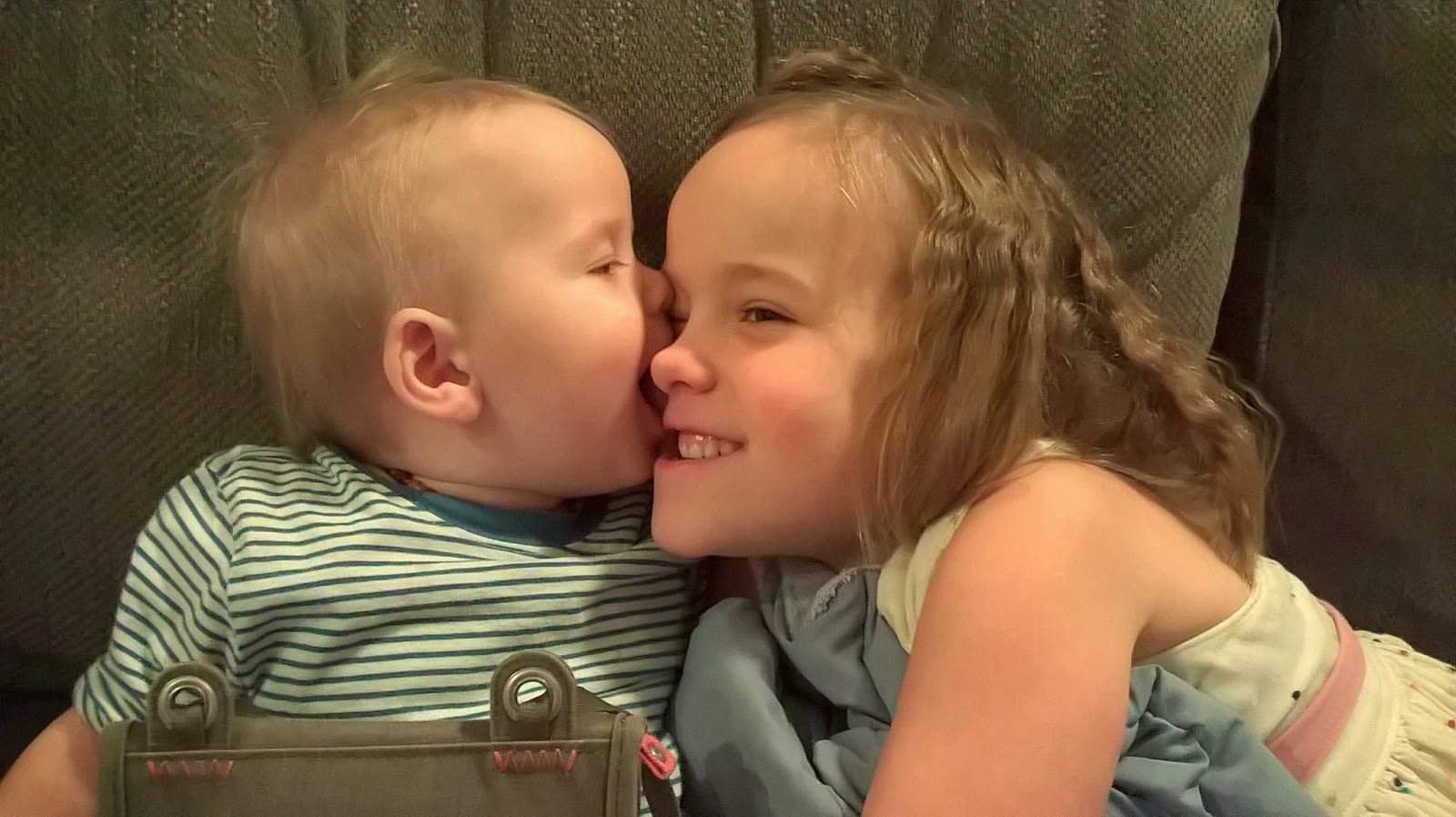 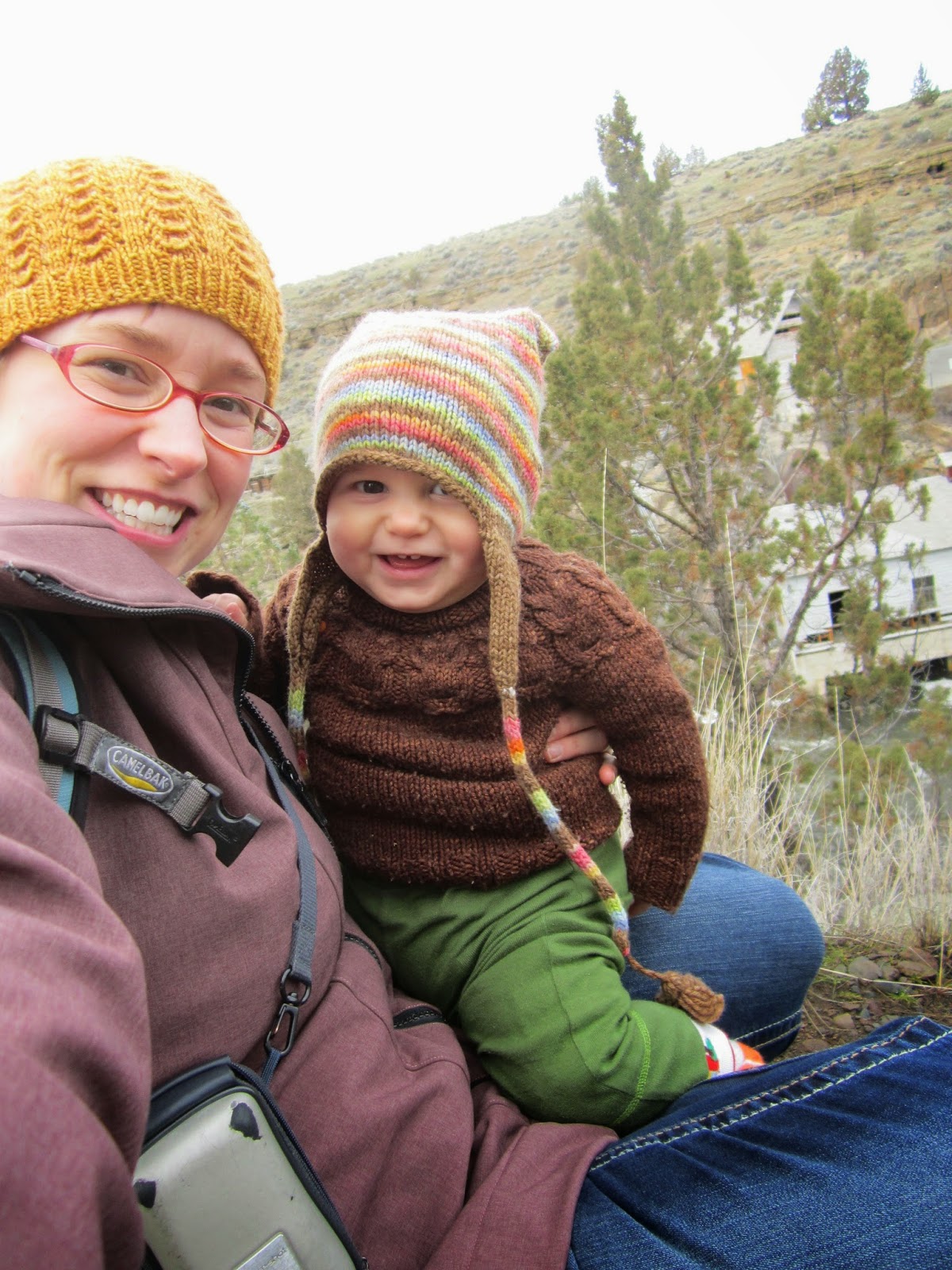 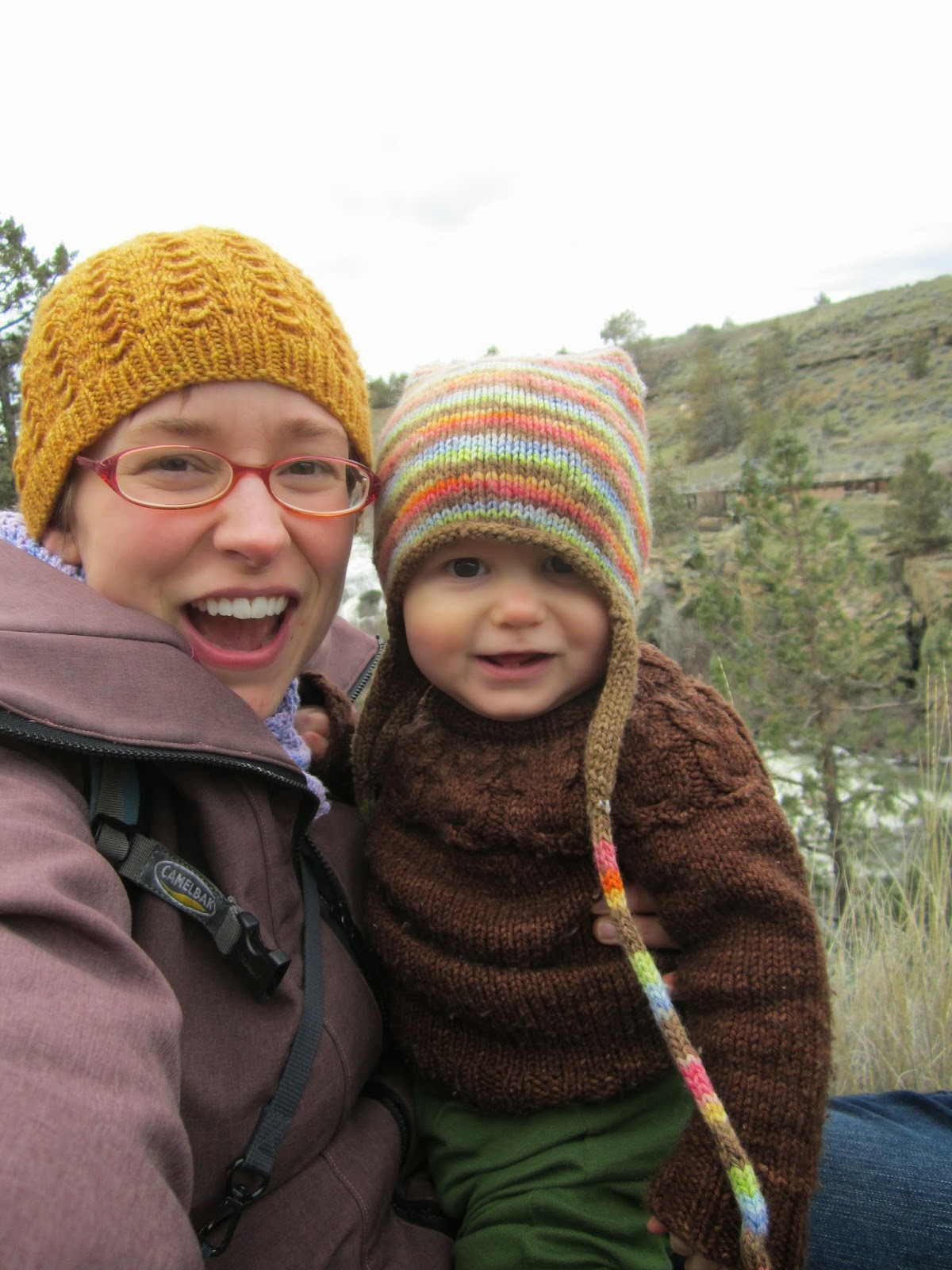 Posted by cottington at 8:21 PM