Cotton and Steel - The Stuff of Fairy Tale Dress Dreams 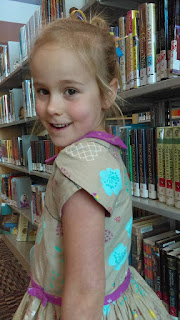 The post that should have been written almost a month ago.
Camden loves this dress, which makes me super happy!  I was on quite the time crunch, as I waited too long too sew it.  Knitting really DOES get in the way these days, as it's more time-consuming, and I always want to finish the "next" project before trying to whip out a few sewing projects.  I am pretty sure I finished this Fairy Tale dress by Oliver and S just a day or so before we left for Vancouver, on a trip to see the in-laws and The Nutcracker. 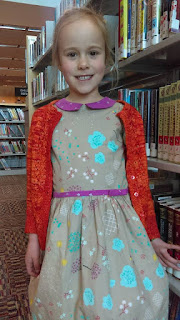 I used Cotton and Steel, though I'm totally blanking on the designer (and when I tried to look, I found MORE gloriousness!!!!).  I decided to go with the tulip sleeves, as I had before, but this time, I did the bow detail, rather than the big tie at the back.  I also changed things up and did the non-rounded collar.  I do have a thing about thinking collars get ugly, if there is interfacing in them, and I sort of feel that way again with this dress.  It's not too awful, so much as the collar gets funky, of course, when it's not freshly ironed.
Last time, I sewed the tulle under-skirt, which was a mistake, as it was just an annoying extra.  THIS time, I had some under-skirts/petti-skirts to pick from, as an awesome friend sent some to us months ago.  BUT....the length of these skirts isn't quite right for the dress, so, you'll see that it sort of bells out, rather than what it should do.  Ah, well - Camden felt fancy, which is what matters.
As for the bow detail:  I do NOT like that you are to cut the fabric on the bias.  It seems unnecessary, and though I don't stretch the fabric when I iron it, it's all weird and puckers...so, sad times.  Also, I thought I'd tacked the bow on nicely, but apparently, I had NOT, LOL....so, when I took the library photos, I attached the bow a bit snugger through the use of a safety pin ;)  And though I DO love the pattern and the instructions are otherwise great, I'm not sure why the bias strip sew-on directions aren't a bit clearer.  I'm sure many people totally know a clean way to sew that sucker on, but method was NOT pretty, and you can see in the back photo how it also didn't meet up with the zipper nicely (and I mostly LOVED my invisible zipper installation this time, LOL).
So...next time, I will totally try the sleeveless version, just for fun, though I'll do the bow in the back again.  I think that'd save me some pain and agony - but I'd really like to use a fabric other than regular quilting cotton.  I think it'd give a nicer finish for this style of dress.

On to some December fun.... 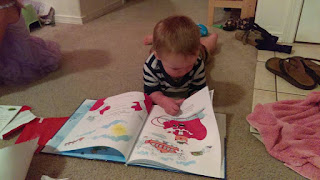 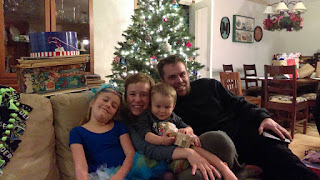 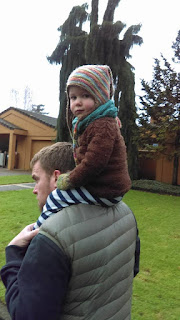 Posted by cottington at 9:01 PM