Spice Spring Up With a Double Dose of Saffron Sweaters!

Ahh!  See what I did there, with that post title????  I believe we can almost call that alliteration, folks ;)

I'm excited to show you, on such a gorgeous Spring day, not just ONE, but TWO, lovely Saffron sweaters, designed by Elena Nodel (I PROMISE the next sweater I knit is designed by someone else, LOL).  I again chose to invite someone else to knit right along with me, a friend who actually knit Camden her very first Saffron a couple summers ago:

The pattern is naturally super easy to read/understand - and doubly so, as it's one of the patterns even I can't trick myself into double-guessing instructions.  I, of course, happen to stress myself out over the stitch pick-up, as it goes alllll the way around the sweater for the ruffle band.  I couldn't stop freaking out over not going down a needle size (you are NOT supposed to, by the way, but I thought maybe I SHOULD, in my case, aha), and did I pick up farrrr to many stitches????  I still have no idea about that one.  Who knows.  I do think, especially after taking photos, that something doesn't seem right about my ruffle band.  It seems loose, but not gathered enough/tight enough, if that makes sense.  So, smaller needle and MORE stitches???  LOL.

Vieve, over at That's What She Crafted, knit another lovely Saffron - this time for HER baby girl.  I love the purple colorway. Vieve used Knit Picks Wool of the Andes in Blue Violet Tonal (which comes in 220 yard skeins!)  She does still need to add a ribbon to her sweater, she says, but I have to say it's pretty stinkin' cute! 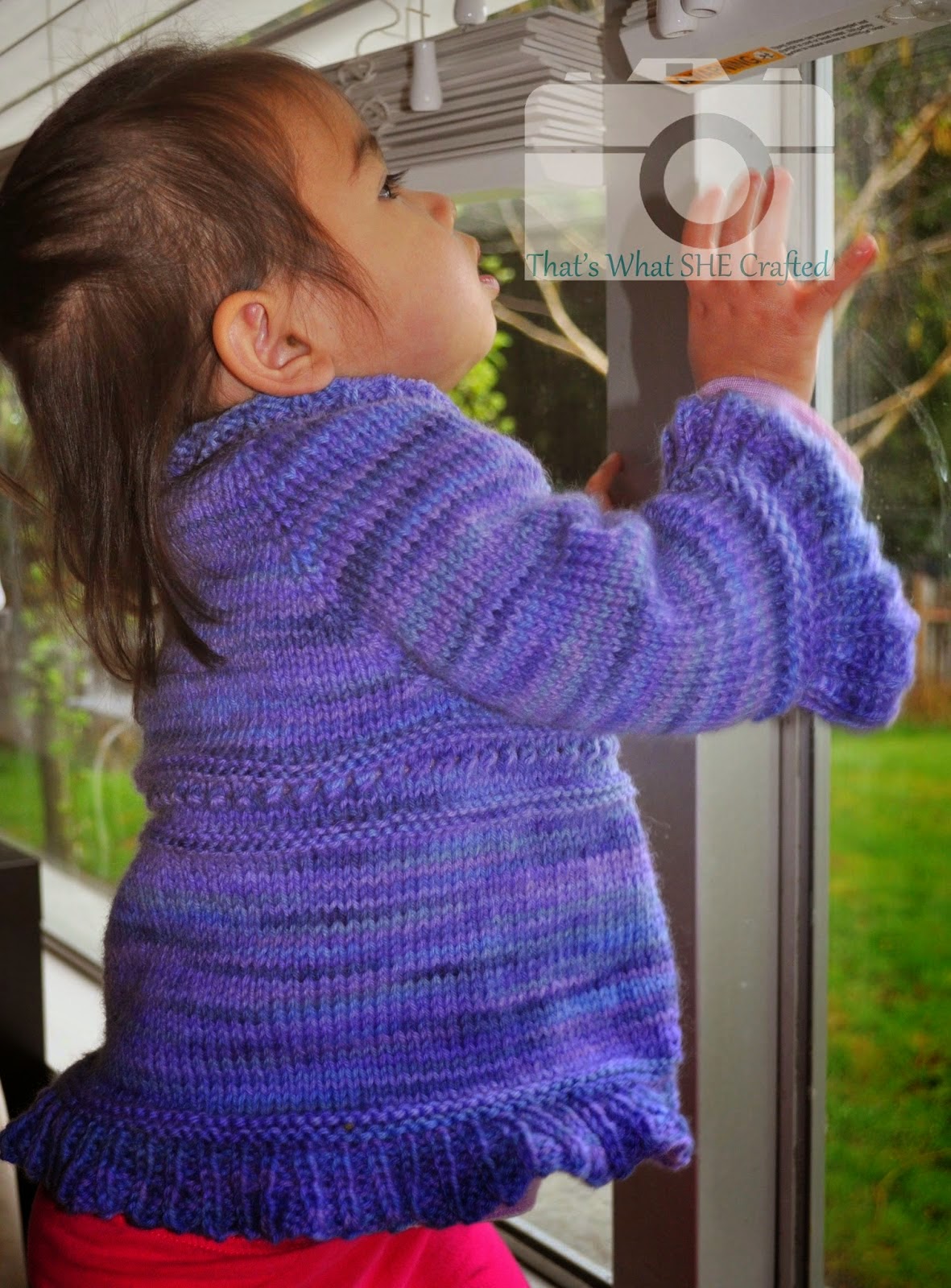 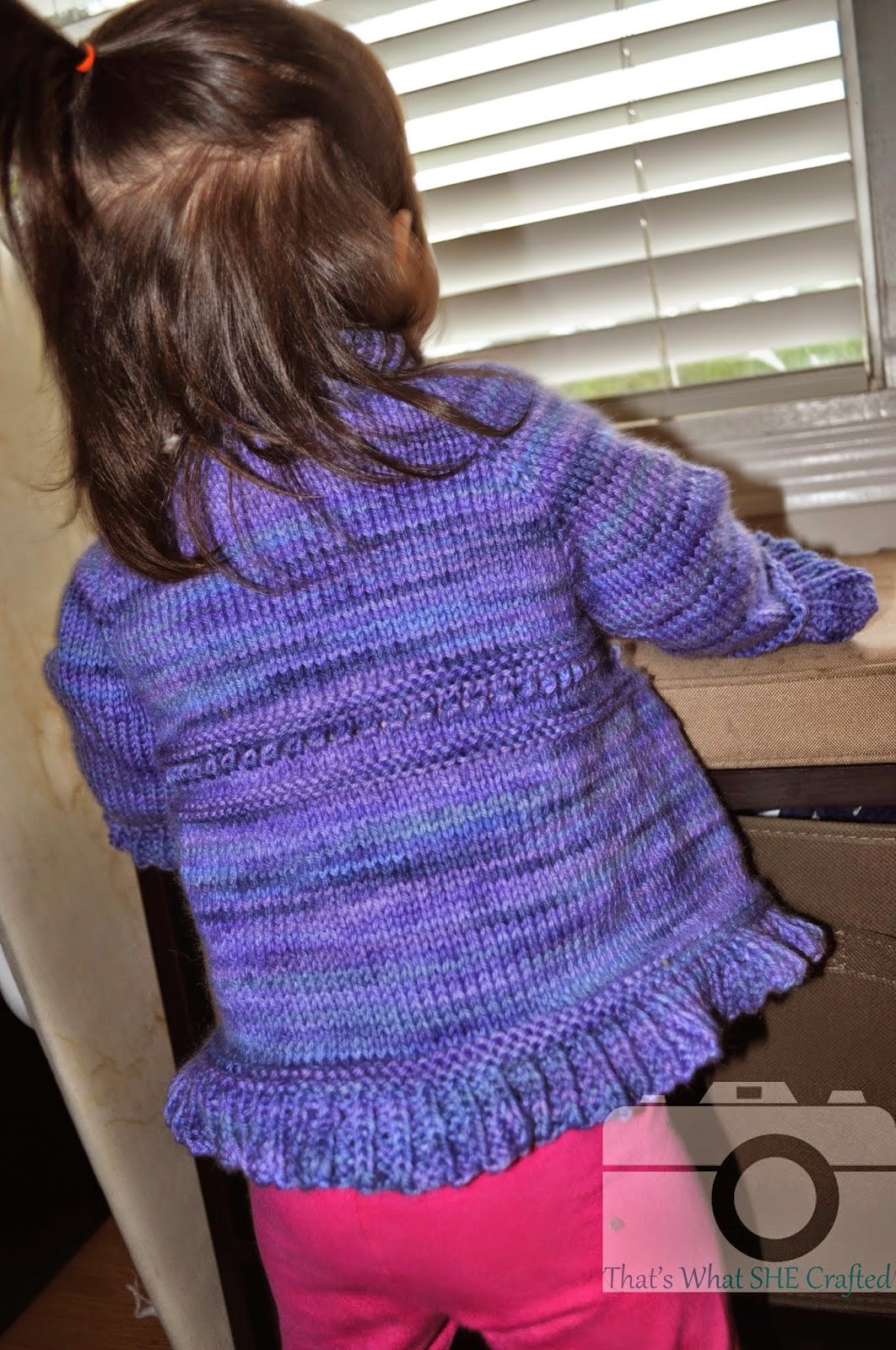 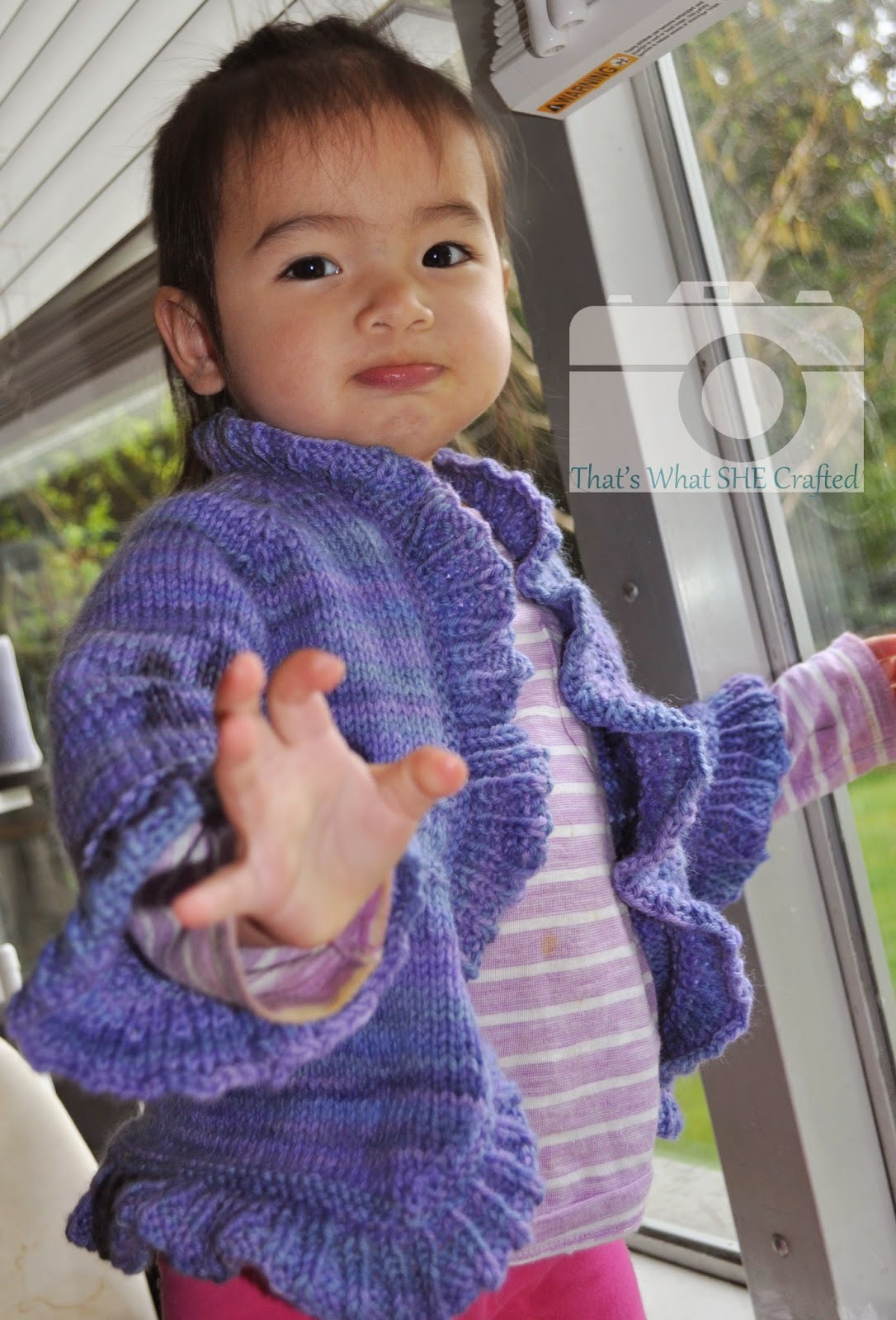 Anyway, I could have easily finished the pattern a couple weeks ago, but the baby is slowing down my knitting.  At least I'll be able to say it's the first sweater I completed literally over his body ;)  (...which makes for sore arms/shoulders, as a side note).  I could have also gone faster, just based on the fact that I had to tear the sweater out...as I was worried, as ALWAYS, that my gauge wasn't right.  I solemnly SWEAR I will do a blocked gauge swatch when I make a sweater for ME, aha! 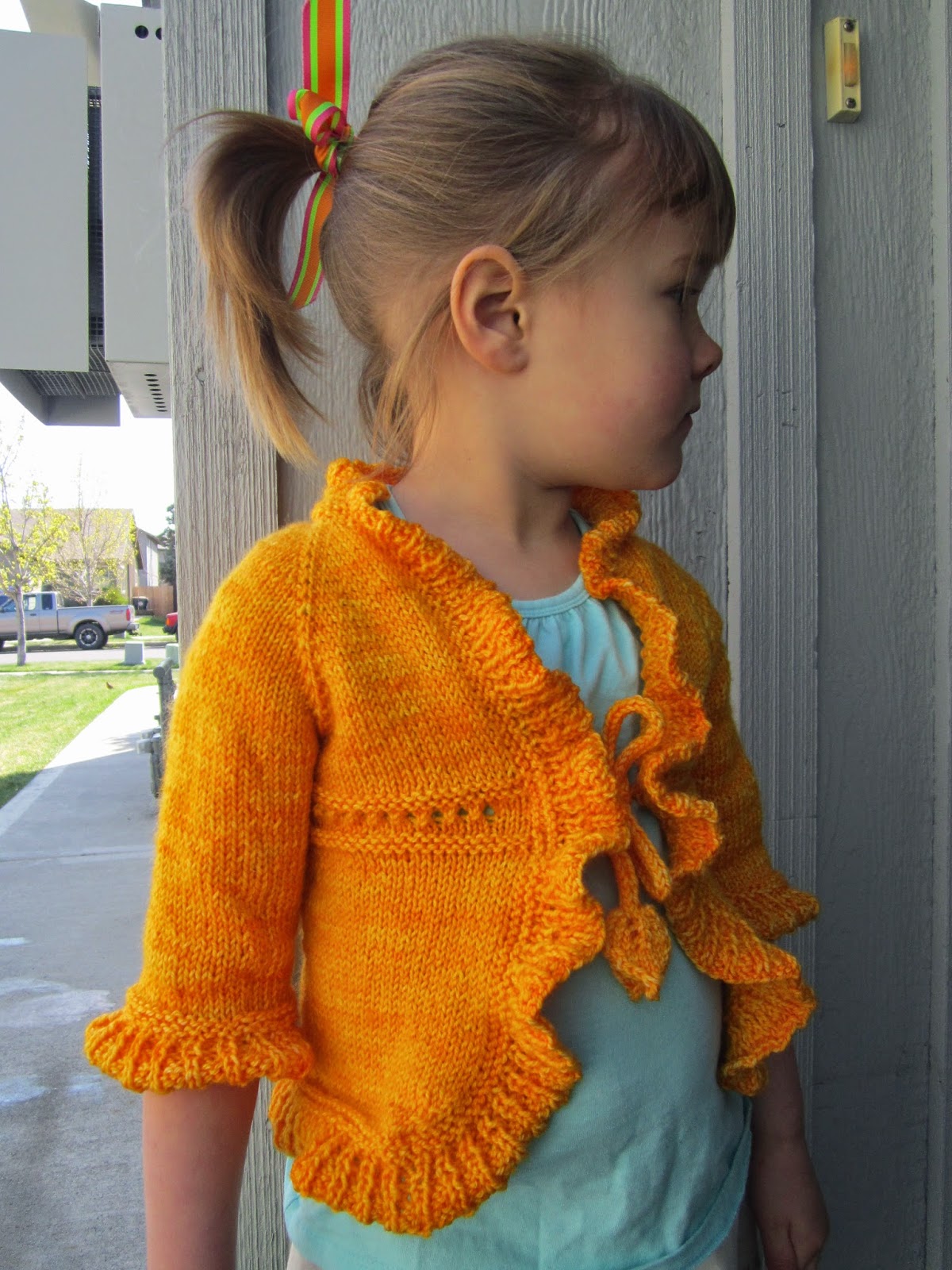 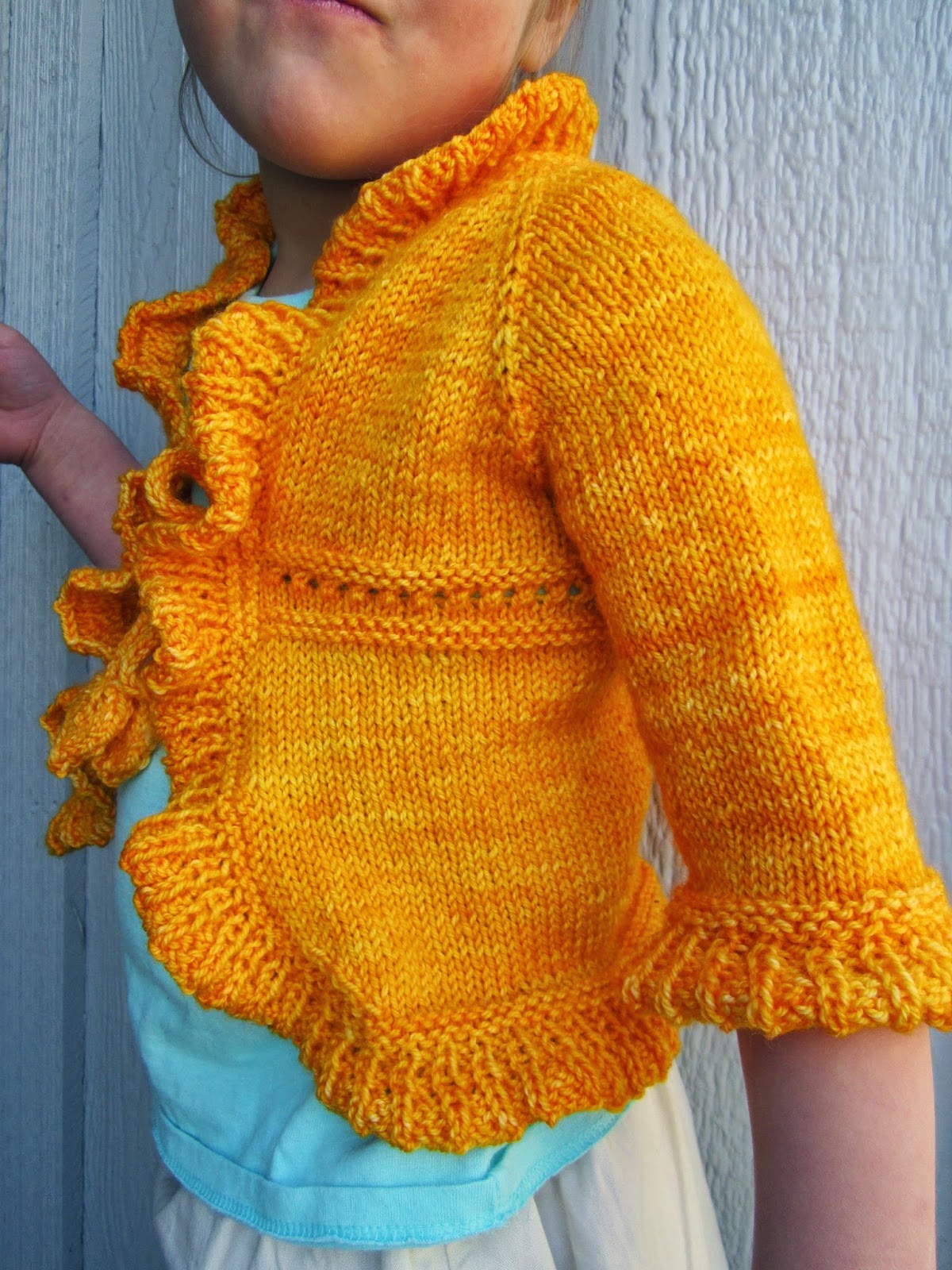 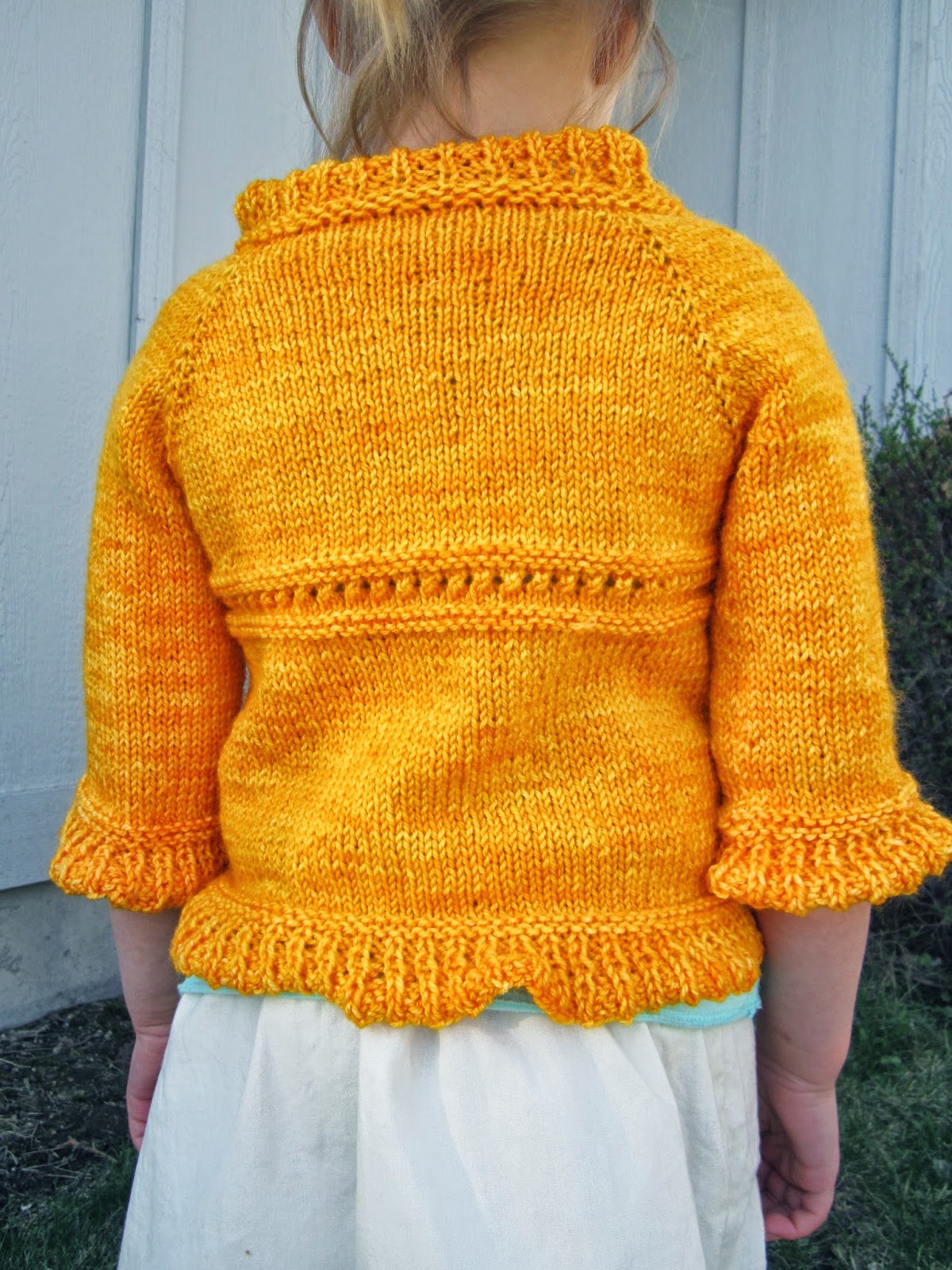 I used Colour Adventures (seems I often DO!) in Pirate's Treasure, which is an IT colorway right now, LOL!  I used Sweet Merino DK, which is a more slippery base.  I feel the pictures capture the color well, which is a gold-type color, a lovely rich yellow, almost seeming orange in a way...but NOT.

Below, she featured different "faces" - LOL