And....almost back in blogging action!  I feel I haven't written in AGES....not that I haven't been sewing, but because I have partially-finished projects lying around, waiting for this or that.  I actually have three Violette Field Threads Josephine creations, also, so, look for that post soon!  I love them!

As for today, I've had this outfit done for days and days, it seems, but the weather turned to *^%$ last week, and it was too cold or cloudy or snowy for pictures.  I made Camden brave the cold today (it was totally in the 30s, I promise!) for pictures, as the ones I took the other day at the library were $*&%, just like the weather. 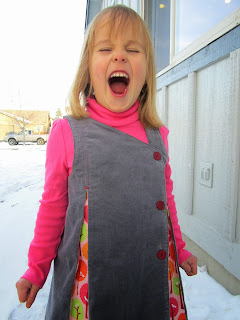 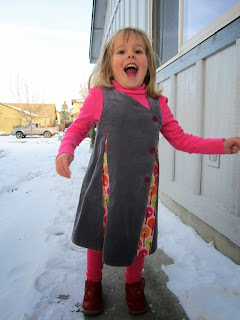 I chose to make Camden's second-ever Figgy's Fiona.  If you can get a hold of it, it's a great little pattern, and there is a version for boys, too!  Those two-for-one deals can be hard to pass up ;)  I did find ONE listing at THIS shop on Etsy, so, research is done for you, LOL.

This is the version I made for Camden soooooo long ago!!!  :O

This time, I opted for classier, rather than zany, and reversed the solid/print.  I was super awesome (one of those YAY ME moments) and used corduroy from my stash (I'm telling you - I have NO idea how much I had originally ordered from Fabric.com, but lawds...I've gotten two pairs of pants out of it - and this!) and contrast from my stash.  You can applaud if you want ;)  I also happened to have a few buttons - thankfully, as I am po' right now, folks! - on hand to use.

I will say it was tricky for me to get decent photos, as I was rushing it because of the cold - and I DID press the dress immediately beforehand (and pull off any loose threads/bits that I could see), but man!  It's tricky to capture corduroy the right way in a photograph...for a genius photograph, such as myself.  Also, I likely should have used a darker gray for the buttonholes, as they seem to glare at me in the photos, though in real life, they don't look too bad. 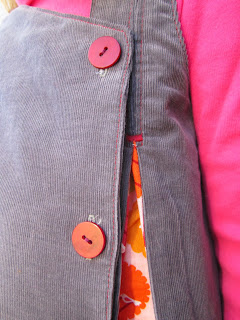 The one detail I didn't get on camera, as it wasn't working out, is that in the shoulders, going from one pleat all the way around to the other, right in the ditch of sewing, is a peek-a-boo of contrast fabric underneath the corduroy, which is a nice touch, I have to say. 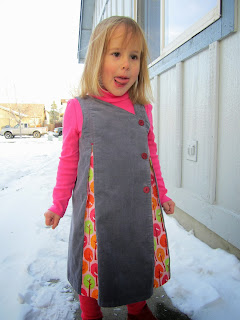 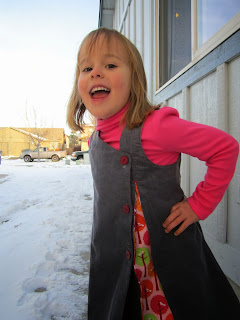 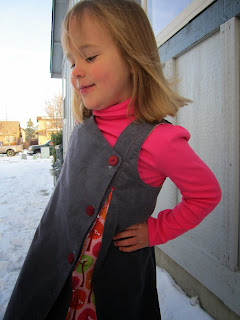 Construction of the pattern is super easy, though if I'm remembering right, the instructions for how to have a clean pleat don't seem AS clear to me, but I knew what to do to make them prettier this time around, as I'm just more experienced now.  Also, I will admit to being confused this time by the hem (as it's fully lined ) - and just doing what I wanted, probably out of laziness, aha!  Don't hate.  I probably made more work out of it, sadly.  Such is life.  I did do the size 4/5, which I think fits perfectly well on Camden. 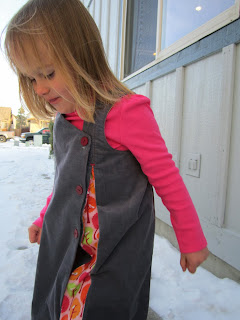