Once upon a time, about 4 years ago, I began working for a wee little fetus named Camden...who then grew into this now 3.5 year old girl who thinks one can run away from polio (the things she says...).  This is THAT little girl: 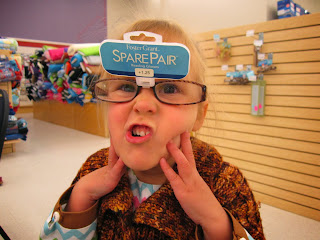 I am pretty sure she is the best employer I could have, albeit frustrating at times (and what employer ISN'T, honestly???) and wacky at others.  I sometimes get to slack off (I truly appreciate those moments - you know, when the boss is busy dinking around, not paying attention, so, you get to do your own version of dinking around) - and I sometimes I have to put in overtime, though rarely.  We are such lucky parents, in that our little girl sleeps well at night (is that JINX #1????) and is a pretty funny, easy-going, happy-go-lucky child.  I can only WISH/HOPE/DREAM that child numero dos is the same in that way.  Pipe dreams, though...

All that to say THIS:  I knew when she was in utero that she was someone for whom I needed to create.  I am weak in so many areas in life, and an area in which I can give is, in fact, a bit of a material thing, so to speak.  I can sew and knit - not super fancy stuff, but clothing, nonetheless.  My goal was/is to provide for my child in this way.  I do not love to buy her clothing from stores.  I prefer for us to create for her at home a wardrobe that speaks to our tastes, as those could never truly be defined by another designer, so to speak.  She is able to help me here and there - sometimes playing so that I can sew, sometimes sleeping so I can knit, sometimes assisting me in picking out fabric for an ensemble...and sometimes standing right there, on the chair while I press the foot pedal at the sewing machine.

I do always have that wish that I had more time to create for her - but to have that time would mean I didn't have her in my life, and as she is known for saying, "That would be nutso in the buttso."  Clearly.  She is a demanding boss, but definitely a highly rewarding boss at that  :)

This is my little girl in the first-ever dress I made for her, and her expression could be depicting her sadness at knowing I had a big eff-up with cutting into the FACING of the dress, rather than the SEAM for turning.  My bad.  It's a play outfit now.  Still fits her, these MANY moons later. 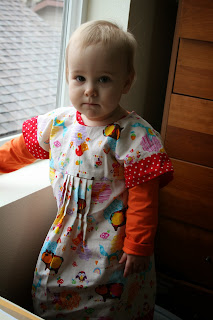 This is the latest sewn creation for my little girl - her Oliver and S Book Report Dress (her second one of these) - buttons by Tessa Ann. 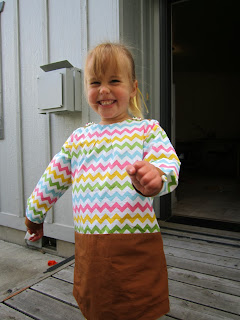 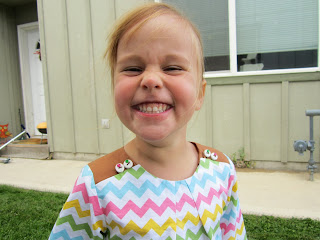 Posted by cottington at 8:26 PM